In time of crisis, one restaurant decides to give back 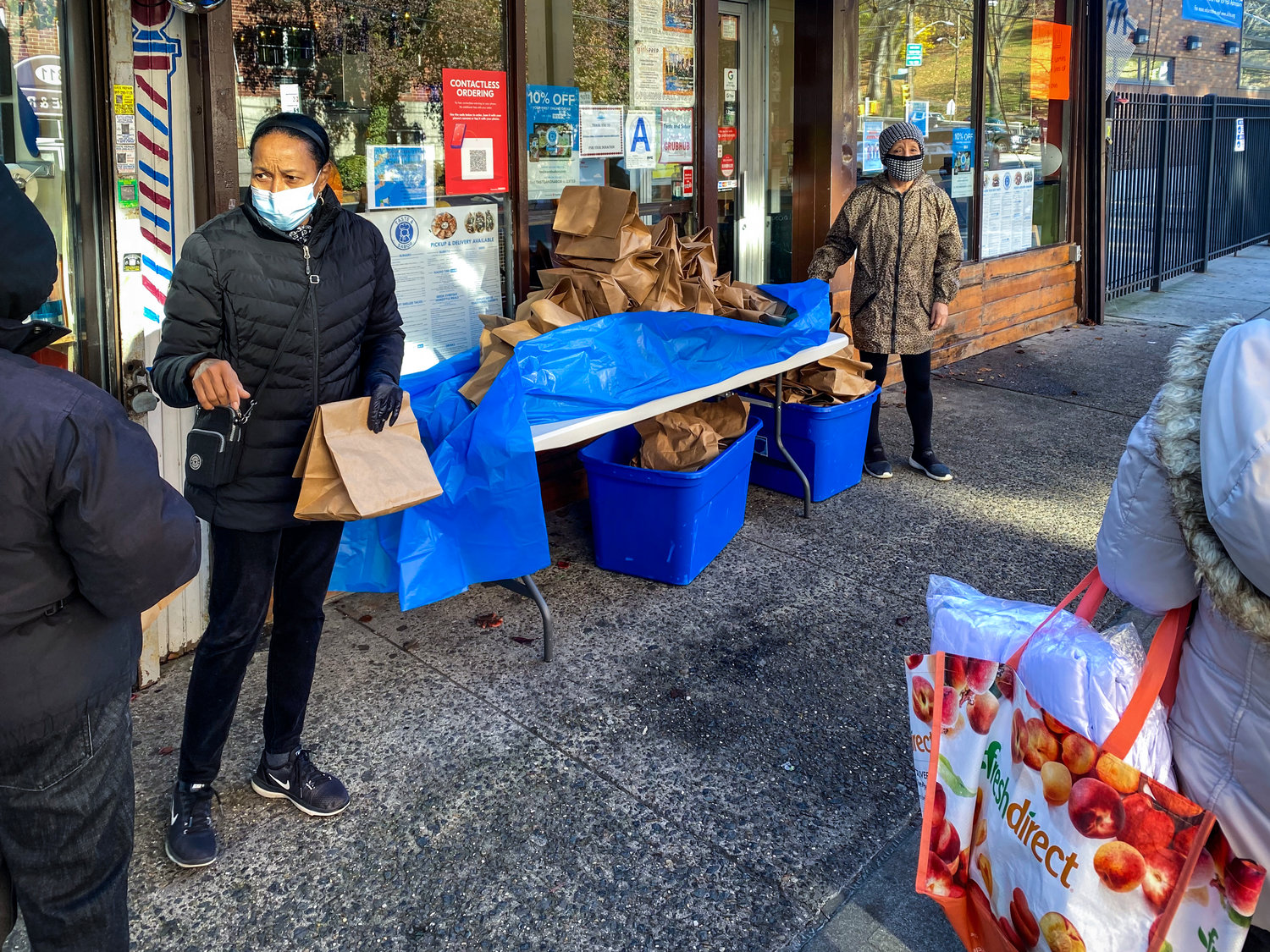 Antonia Feliz works with another volunteer to hand out bags of food in front of Taste & Sabor on West 231st Street to those who might be a little short on food. The restaurant has been lending a helping hand to those in need even before the coronavirus pandemic.
FRANK DIEZ 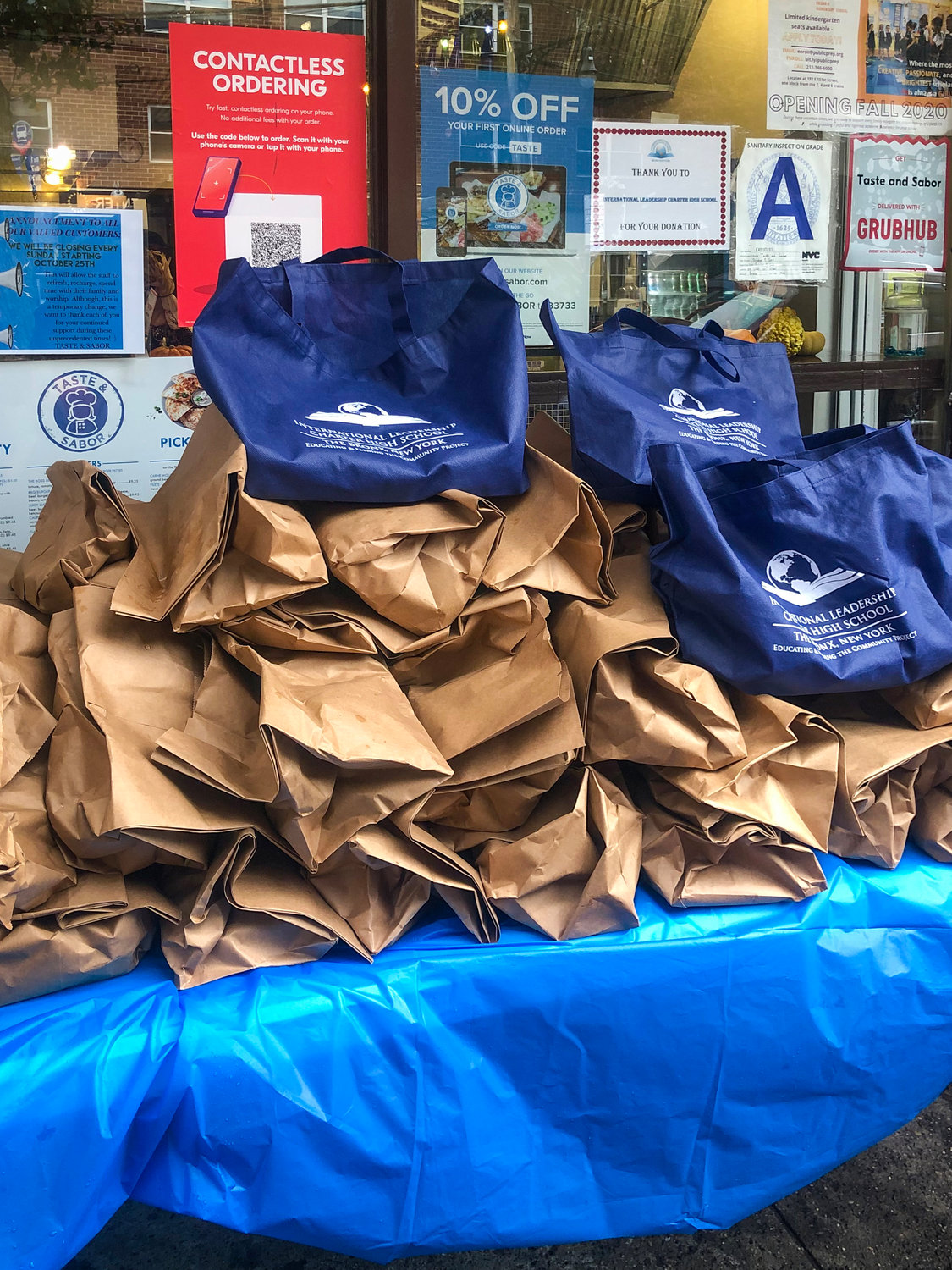 While a lot of what Taste & Sabor hands out to those in need comes from extra supplies from deliveries, the West 231st Street eatery also has been getting a helping hand from its Riverdale Avenue neighbor: The International Leadership Charter High School.
Courtesy of Taste & Sabor 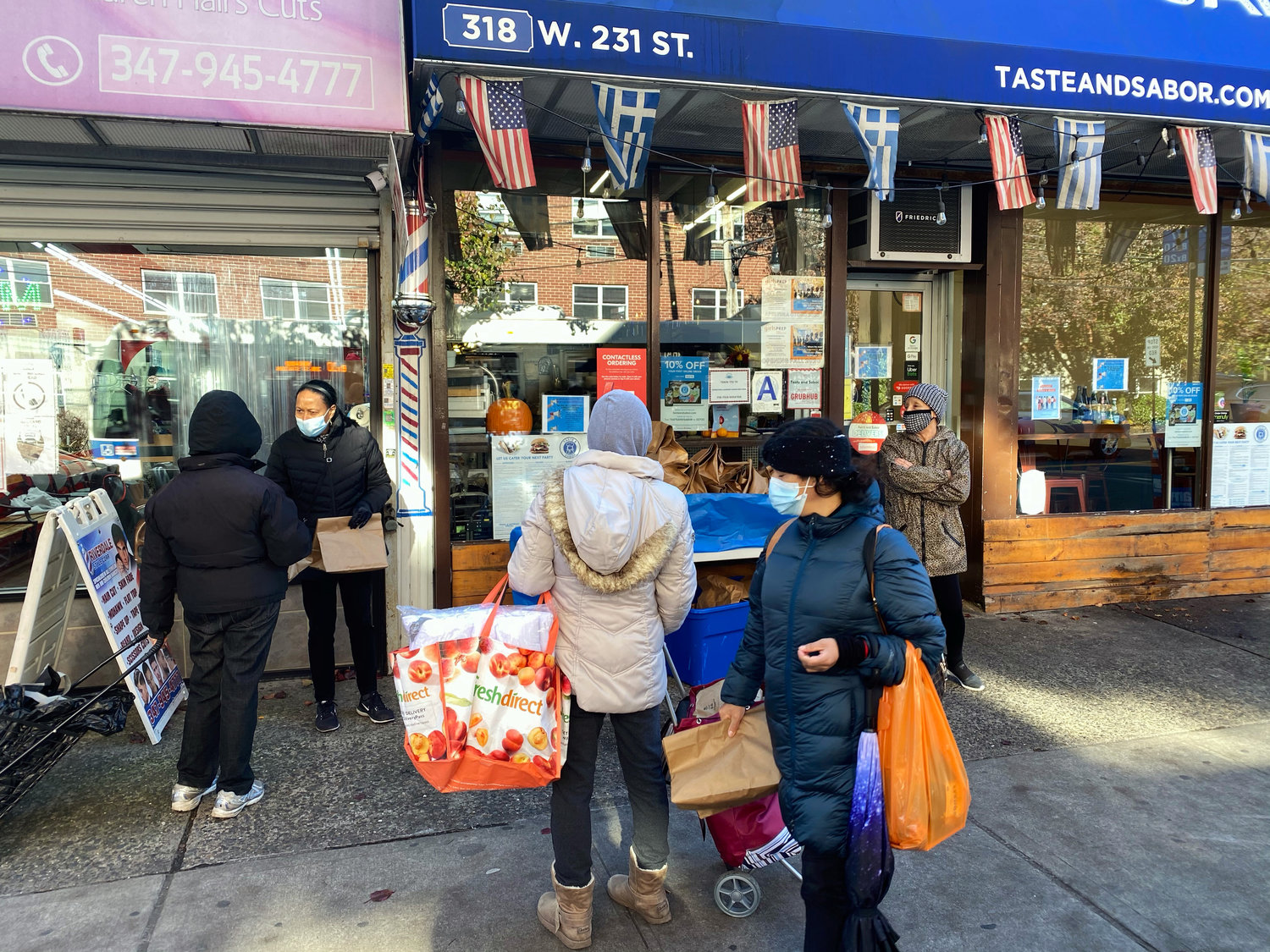 Getting something to eat at Taste & Sabor on West 231st Street doesn’t always require money. On Monday and Fridays — depending on how many leftover supplies are available — those in need simply have to show up. It’s something eatery owner Nikki De Leon has been doing even before the coronavirus pandemic.
FRANK DIEZ 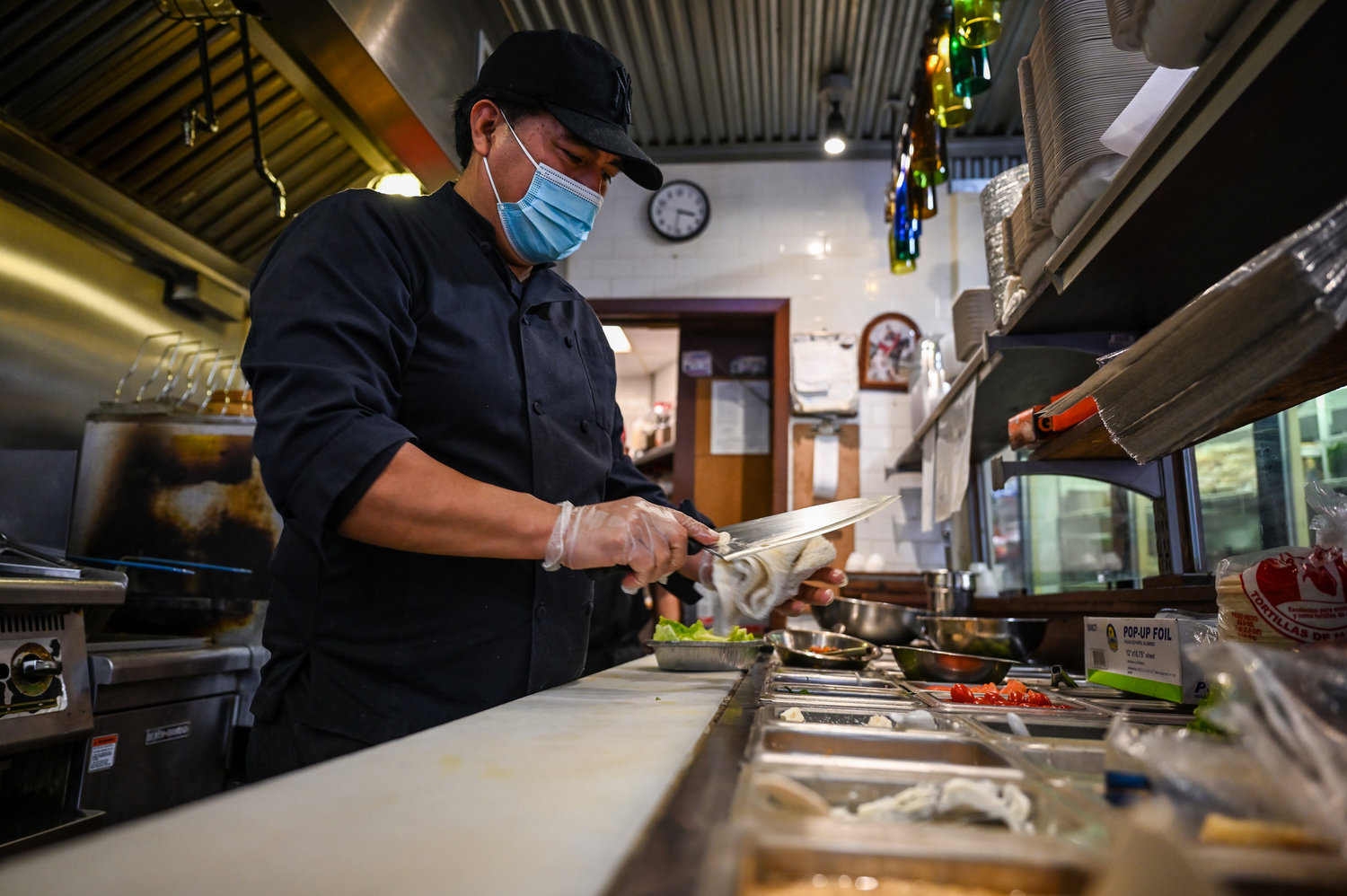 A cook at Taste & Sabor on West 231st Street and Riverdale Avenue cleans his knives during a lull in customers. While the eatery is known for its Latin and Greek fare, some neighbors in need have discovered that when Taste & Sabor receives more food than it needs, it’s willing to share.
HIRAM ALEJANDRO DURAN 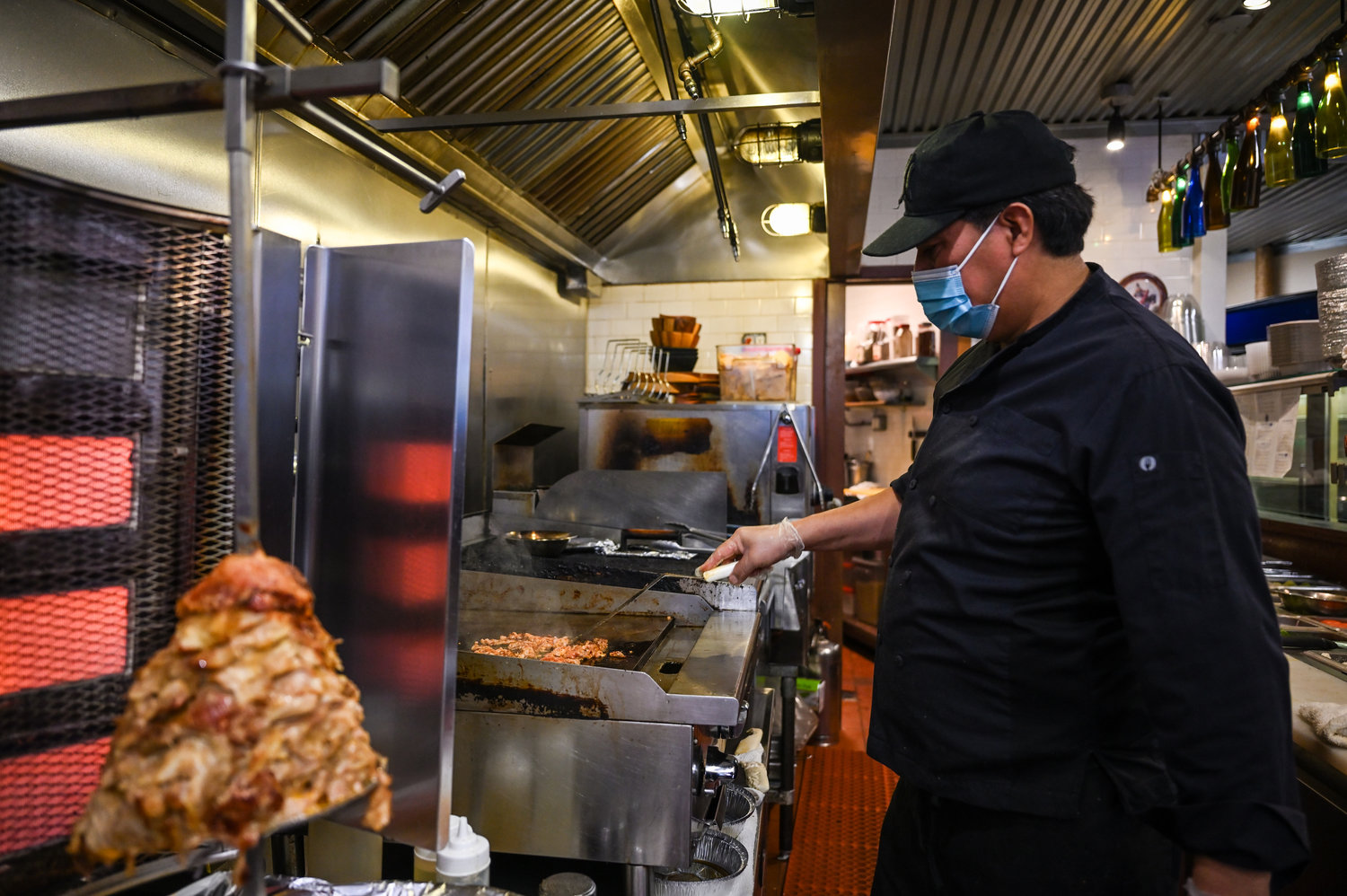 A cook at Taste & Sabor prepares meat for a salad bowl at the West 231st Street eatery. While the eatery is known for its Latin and Greek fare, some neighbors in need have discovered that when Taste & Sabor receives more food than it needs, it’s willing to share.
HIRAM ALEJANDRO DURAN
Previous Next
By FRANK DIEZ

One Kingsbridge eatery that usually serves up Latin and Greek fare is serving something a little extra to its community in the wake of the coronavirus pandemic — free food.

Ever since Nikki De Leon purchased Taste & Sabor on West 231st Street near Riverdale Avenue in 2019, she found herself receiving more restaurant supplies than she needed. Because of that, De Leon almost immediately started offering any excess from the delivery trucks to anyone who asked.

“We were getting a lot of stuff, and it was going to waste,” De Leon said. “So I decided to just give it to people.”

De Leon’s advertisement for such giveaways was simple: She would put a sign out in front of the restaurant encouraging anyone interested in Taste & Sabor’s extra boxes of fruits and vegetables to grab what they needed. It wasn’t long before the community started to take notice.

What had been simply a way to give back a little by offering some of what was left over turned into a lot more. Because of the demand, a few extra boxes turned into orders of many dozens more to distribute.

“We started giving away things three times a week, but it became too much for us,” De Leon said. “So we decided on just Mondays and Fridays.”

Patrons have shared pictures of Taste & Sabor’s donation days on social media, which itself has only brought more attention to what De Leon’s eatery is doing.

She added that health and food companies like Cigna and Goya Foods have reached out to offer extra boxes of food and meal kits.

The restaurant needs to earn nonprofit status first to be able to receive these donations — which De Leon admits is a little daunting to figure out.

“I’m not going to lie to you, it’s not something I’m familiar with,” she said. “So I’m trying to see how I’m going to do that, and also I need to find out how this is going to work.”

Since March, many of those who visit Taste & Sabor looking for donations are struggling because of lost jobs, or simply lacking access to low-cost food during much of the economic slowdown created by the pandemic. De Leon sees representatives of all age groups waiting in line twice a week, but it seems it’s the elderly who find her restaurant on these giveaway days the most.

“I see so many people that really need it,” De Leon said. “They come looking for it now on Mondays and Fridays, and I notice a lot of older people come to us. That’s what makes me sad sometimes to see.”

De Leon wants to help as many people as she can with hopes to expand aid to other parts of the Bronx, but is unsure how. At least for now.

“If I’m able to provide something, I don’t have a problem with it,” De Leon said.

And she’s been getting that help from a neighbor: The International Leadership Charter High School has supplied her with some of the school’s unused meals. These extra meals help if deliveries don’t come on time due to difficulties working around COVID-19.

Antonia Feliz, who has volunteered with Taste & Sabor for the past month, describes what De Leon is doing as selfless.

“People need help,” she said. “Just the fact of being here, being available to do this. Allowing people to come into their store to get this, in spite of having COVID going around. Providing the room and providing the service. It’s a great thing.”

Restaurants were among some of the hardest-hit businesses when the coronavirus rolled through New York, forcing many to change their entire model, if not being forced to close — sometimes permanently. De Leon’s efforts can even help those other struggling restaurants nearby needing supplies.

“It’s very helpful,” said Nereida Colón, a neighbor who depends on some of what Taste & Sabor is giving away. “I’m by myself, but whatever I get I share with my neighbors. A lot of people don’t come out, so I share with them whatever I don’t use.”

De Leon also stressed it’s important to give people something to look forward to. She just wants to set a good example for her family. Especially now.

“I have two sons and one granddaughter,” De Leon said. “Everything I do, I do for them.

“I just want to make sure they know to stay humble.”