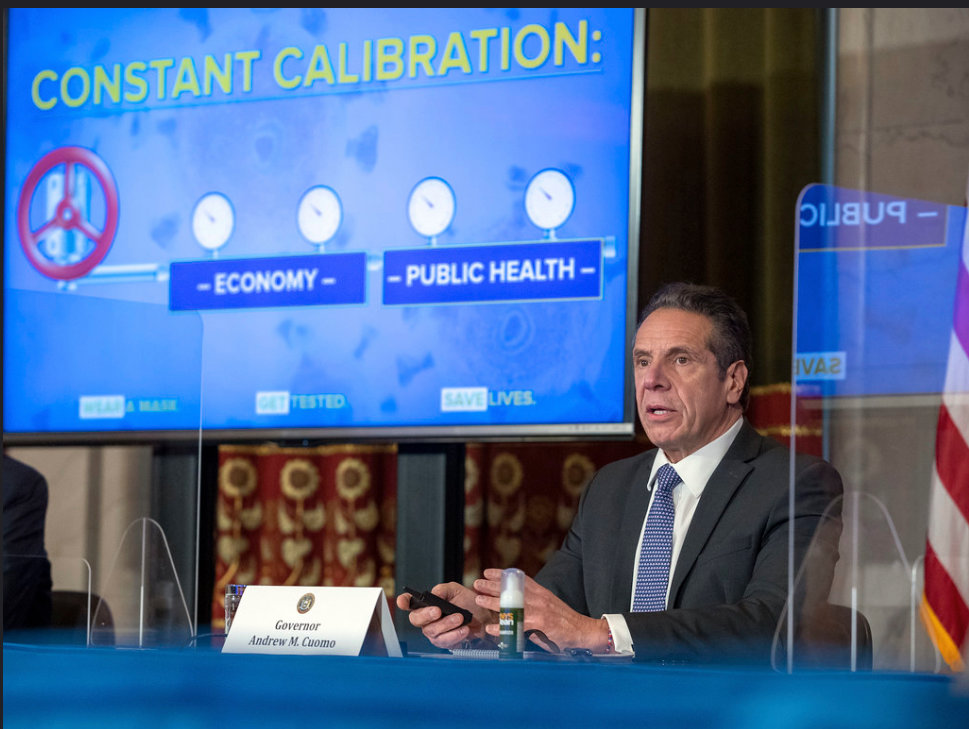 Gov. Andrew Cuomo has shut down indoor eating at New York City restaurants again, despite people being 70 times more likely to be exposed to the coronavirus at home than in a restaurant.
Courtesy of Mike Groll, governor's office
By MICHAEL HINMAN

New York City is going backward when it comes to its battle with the coronavirus. And that means come Monday, indoor dining at restaurants inside the city's limits will once again be outlawed.

Gov. Andrew Cuomo made the determination Friday, making good on a warning issued earlier in the week that if hospitalization rates don't stabilize, he would be forced to take drastic action.

"Some states have had these dramatic open and closes — full open and full close," Cuomo told reporters. "I think that is highly destructive, and it's not the best way to go through this."

Instead, the governor has relied on what he describes as data-driven decisions, fueled by more than 21 million SARS-CoV-2 tests administered in the state since the beginning of the pandemic last spring.

Today, those numbers have produced positive results in 4.5 percent of tests administered outside of what Cuomo describes as "micro-clusters," and nearly 7 percent inside. More than 5,000 people are occupying hospital beds across the state, with 1,000 of them in intensive care.

So far, Cuomo plans to only close New York City restaurants to indoor dining — already operating at a capacity far less than the rest of the state, after being the last to allow people inside in the first place. He also called on the federal government to provide financial relief to bars and restaurants — something Congress has shown little interest in doing since summer.

The governor's proclamation, however, confuses Melissa Fleischut, president and chief executive of the New York State Restaurant Association, who fears many eateries will not be able to bounce back from yet another closure.

"Shutting down indoor dining in New York City makes little sense based on the state's own numbers," Fleischut said, in a statement. "And to make matters worse, we are offered no plan for survival to get through this shutdown. Today's news will do nothing more than incentivize more unregulated indoor household gatherings," something Cuomo's own numbers say account for nearly 75 percent of exposures.

Cuomo's team pored through what they described as 46,000 "data points" between September and November, finding that more people are exposed to the coronavirus at home than they are anywhere else. Restaurants, on the other hand, accounted for less than 1.5 percent of exposures.

That was not only behind household and social gatherings, but also health care delivery (7.8 percent), higher education student (2 percent), and education employee (1.5 percent).

"Restaurants have done their part, and the state's own numbers reflect this fact," Fleischut said. "This action will inevitably result in massive layoffs and vast closures right before the holidays. This action is unfair and devastating."

Cuomo, however, maintains the decision is in compliance with guidelines recently set by the Centers for Disease Control and Prevention. He also said that while he can't move some money toward these affected businesses, Cuomo will continue the moratorium on commercial evictions, although he stopped short on offering rent forgiveness for affected business.

Although the weekend is expected to offer almost spring-like weather, once Cuomo's new restaurant shutdown begins, temperatures are expected to fall into the 30s, with chances of snow coming as early as Wednesday, according to Weather.com.

While some restrictions will be upgraded at salons and gyms, Cuomo says he plans to keep them open because exposure has been minimal in both places.

Cuomo didn't say when New York City restaurants could reopen, but he did warn that although a vaccine has been approved for mass distribution to finally end the pandemic, restrictions of some sort are expected to continue into the summer, and possibly even into the fall.

"When does it end? It ends when the vaccine hits critical mass," Cuomo said. "That could be June. That could be December. Between today and June, that is a long six months. We can't get complacent that a vaccine is here and everything is going to be fine.

"We have only been at this for nine or 10 months, and we have another six months to go. If the facts change, we will adjust to the facts."