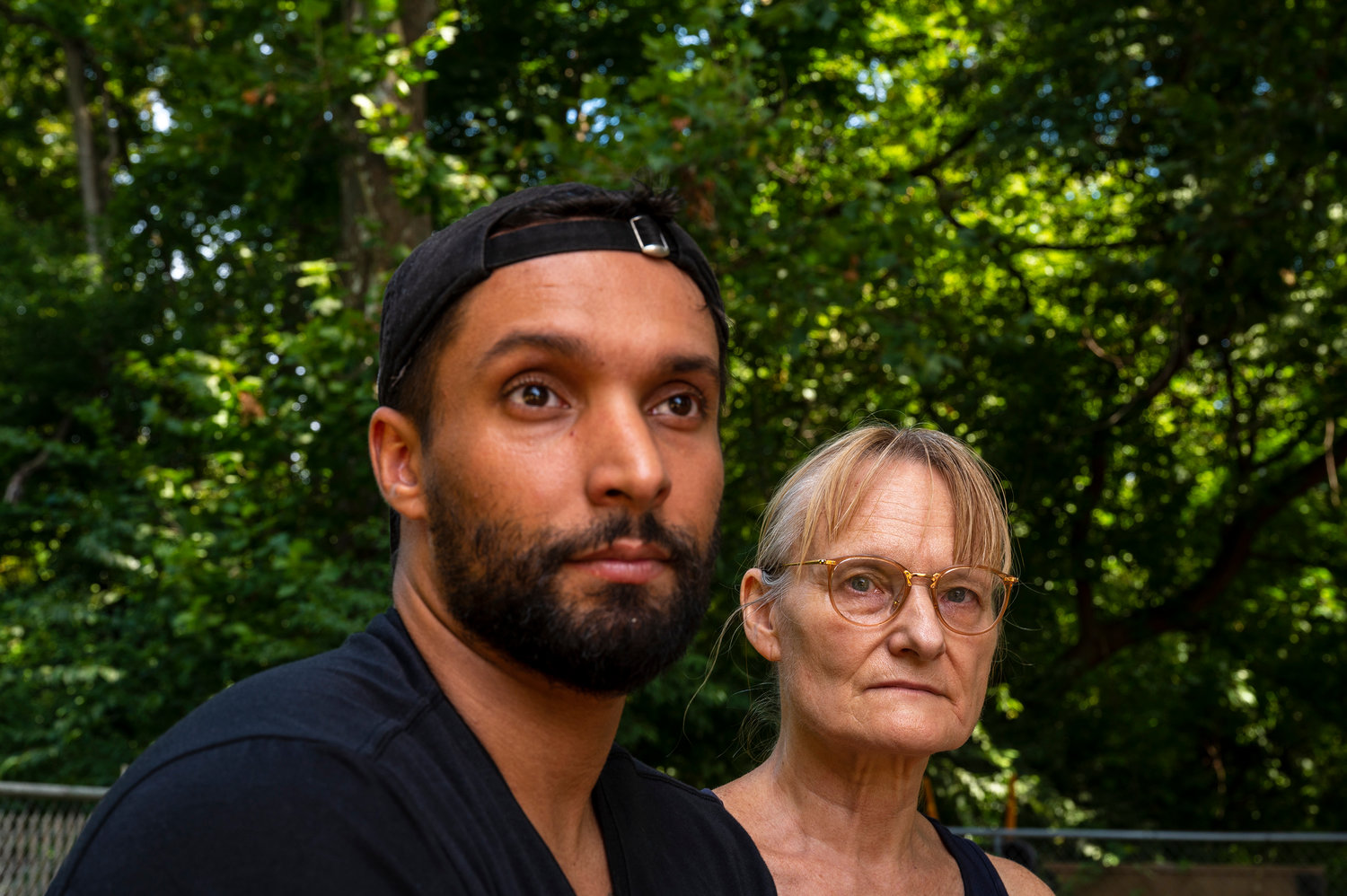 Maryann McCabe and her son Gabe, with their dogs, Pebbles and Cali, in Ewen Park across the street from 511 W 232nd St on Monday morning. McCabe is fighting to stay in her home on the fifth floor of the co-op building which she shared with her partner, David Burrows, for more than two decades before he passed away in 2019.
Hiram Alejandro Durán 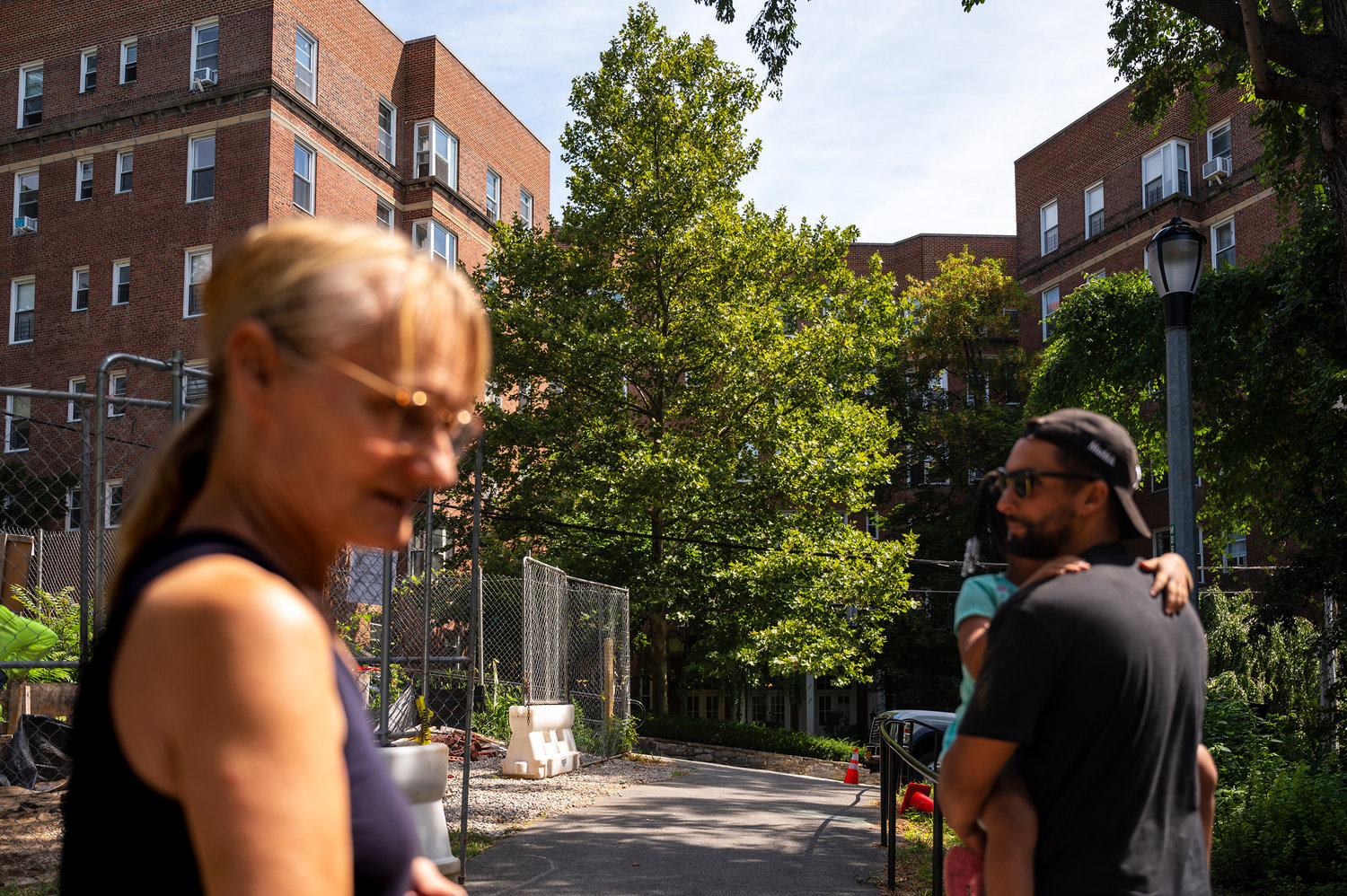 The exterior of 511 W 232nd St over Ewen Park on Monday morning. It is the site of a struggle between a co-op owner and the board, which is trying to evict her because they claim she has no right to live there any more.
Hiram Alejandro Durán
Previous Next
By Abigail Nehring

From the time her son, Gabriel, was 4 years old, Maryann McCabe and her partner, David Burrows, knew they wanted to build a home together at 511 West 232nd Street, a 66-unit prewar co-op that Burrows bought into in the nineties. Their small family lived in his unit on the fifth floor facing Ewen Park, where families walk their dogs and kids run through sprinklers in the summer.

When a smaller unit next door became available in 2006, McCabe pounced on it, and the couple planned to join their two units into one, creating a spacious home for two music professors to share with their cats and dogs, plus a room for Gabriel when he was home from boarding school.

All that changed in 2010 when Burrows was diagnosed with dementia. His health began to decline, at first slowly, then rapidly.

Over nine years, McCabe watched her partner’s mind slip away as she became his primary caretaker. When he was placed in home hospice in 2018, she outfitted the apartment to accommodate him and remained at his bedside throughout much of his final year of life.

When the couple’s downstairs neighbor, Michael Vega, complained about the noise from footsteps on the uncarpeted floor above, she defended Burrows and sent a nurse’s letter to the co-op board explaining his condition.

The real trouble was just beginning.

When Burrows died, he left his co-op shares to McCabe. But in 28 years, the couple never married, and unlike other states, New York does not recognize common law marriage.

“He asked me to marry him some years ago,” McCabe said. “But he was already very sick. I did not think ahead. I just thought how sad all of it was.”

After her partner’s death, McCabe discovered her future at 511 West 232nd Street would be decided at the caprice of the co-op’s board of directors. For more than a decade the man at its helm has been none other than Vega.

Before she knew it, McCabe would be facing possible eviction from her long-time home. She eventually had to hire an attorney to file for an Article 78 proceeding to fight the eviction.

Co-op sales are unlike any other type of real estate transaction. Rather than home equity, shareholders gain stock in a private corporation that runs the building and leases its units to shareholders.

It’s a popular option in New York City, where co-ops comprise 26 percent of all owner-occupied units according to the most recent housing and vacancy survey. They bolster the city’s overall housing stock, which consists of about 3.2 million housing units. An estimated 399,200 units — 13 percent — are in co-op buildings.

But co-ops are famously secretive about their reasons for accepting or rejecting applications for new shareholders, and there is little accountability for discrimination against people of color, single mothers, and other prospective buyers who may be highly qualified and will never find out why they were turned down.

The impact on transfers between longtime residents like Burrows and McCabe is even lesser known. Co-op boards have occasionally been held accountable in the courts for violating the Fair Housing Act, which prohibits housing discrimination based on race, disability, sex, religion, or national origin. Its local counterpart, the New York State Human Rights Law, also includes protections against discrimination based on age, marital status, sexual orientation, creed and military status.

Legislation that would have required co-op boards to disclose a reason for their decision to reject applications failed in Albany this year. For now, it’s up to the prospective buyer to prove discrimination occurred.

The appellate division of the Bronx Supreme Court will soon take up the question at 511 West 232nd Street.

It may be McCabe’s last shot at remaining in her home after 511 West 232nd Street Owners Corp. rejected her application to purchase the shares and proprietary lease Burrows gave to her in his will. The co-op filed to evict her this month. Her son, Gabriel, now 34, and his dog Cali were forced out of the unit McCabe owns next door earlier this year. He said he’s been living in his car and staying with friends.

“David Burrows was her longtime partner,” said Yoram Silagy, a partner at Vernon and Ginsburg who is representing McCabe in the Article 78 proceeding. “When he became ill, she took care of him, and he left her the co-op in his will.”

“As the longtime romantic partner, she has the right to continue to live there. They said no simply because they don’t like her, and that’s basically it. The (Bronx Supreme) court is discriminating,” Silagy said.

Her petition was denied by a judge this spring, and will soon begin winding its way through the appeals court. Silagy said he plans to file the appeal in the coming months.

When an owner dies, any family that remains in the apartment and inherits the shares typically has the right to have the lease transferred to their name and continue living there. But for a case that isn’t clear-cut — such as longtime partners who never married — an ornery neighbor with a lot of influence can make the difference between being allowed to stay and receiving an order to vacate.

“Proprietary leases are usually pretty clear about the transfer of shares to family members,” said Stephen Budihas, president of the Association of Riverdale Cooperatives & Condominiums. “Simply put, co-op boards may not ‘unreasonably withhold’ transfers upon death to a financially responsible — as determined by the co-op board — member of the lessee’s family.”

McCabe is partially retired and has just begun receiving Social Security benefits. Her long tenancy in the building was irrelevant in the board’s consideration of her application, they said in their reply to her petition, which denies any allegation of discrimination.

Their determination was “squarely based on its review of the documents supplied by Petitioner in her April 26, 2021 application,” they said.

“The board has considered the application carefully and has denied the application,” it says, further stating that McCabe “must immediately vacate the apartment, remove all personal belongings and, in her capacity as executor of the estate of David Burrows, ready the apartment and list it for sale with a licensed real estate broker.”

McCabe was incredulous. “What is going on here?” she asked. “You never know what’s going on. It’s mystifying. What are the rules?”

In an email to The Riverdale Press, Quinn said 511 West 232nd Owners Corp. is not required to recognize McCabe’s contention that she was Burrow’s spouse.

“The law gives the term ‘spouse’ a specific and unique meaning, which does not apply to Ms. McCabe,” Quinn said. “Accordingly, the board adhered to that definition and in its business judgment declined to transfer the shares.”

McCabe’s petition hinges on the language set out in the proprietary lease.

“In most cases ‘family’ is defined as the immediate and biologically related family by birth, marriage, or adoption, including spouse, children, parents, grandparents and siblings,” ARC president Budihas said. “The documents of each individual building need to be examined to determine the precise and applicable definition.  That said, the operational interpretation of the term ‘family member’ has occasionally been under scrutiny by the courts which have at times ruled to extend the definition beyond the traditional understanding.”