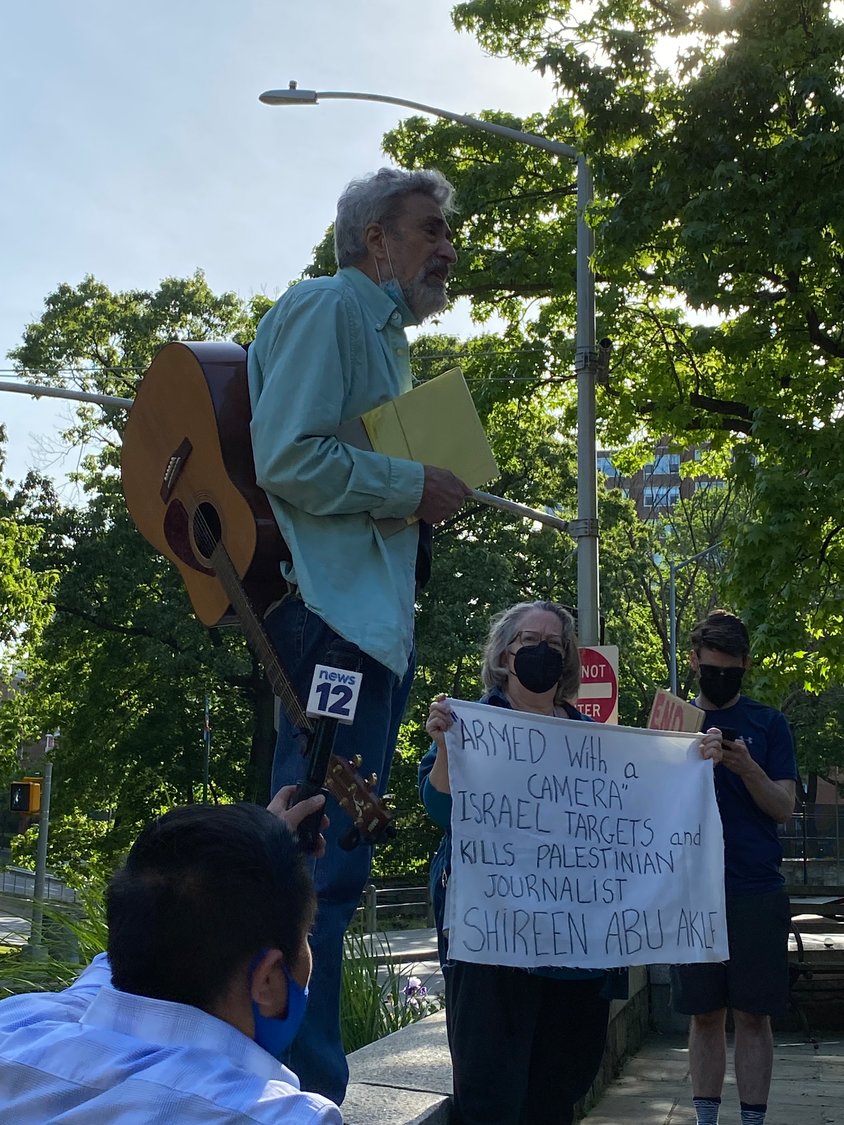 Steve Siegelbaum, an outspoken member of North Bronx Racial Justice and Jewish Voice for Peace, leads a protest at Bell Tower Park. One of the issues he and others cited was the pro-Palestinian boycott, divestment and sanctions movement that has been accepted on the CUNY School of Law campus.
GARY LARKIN 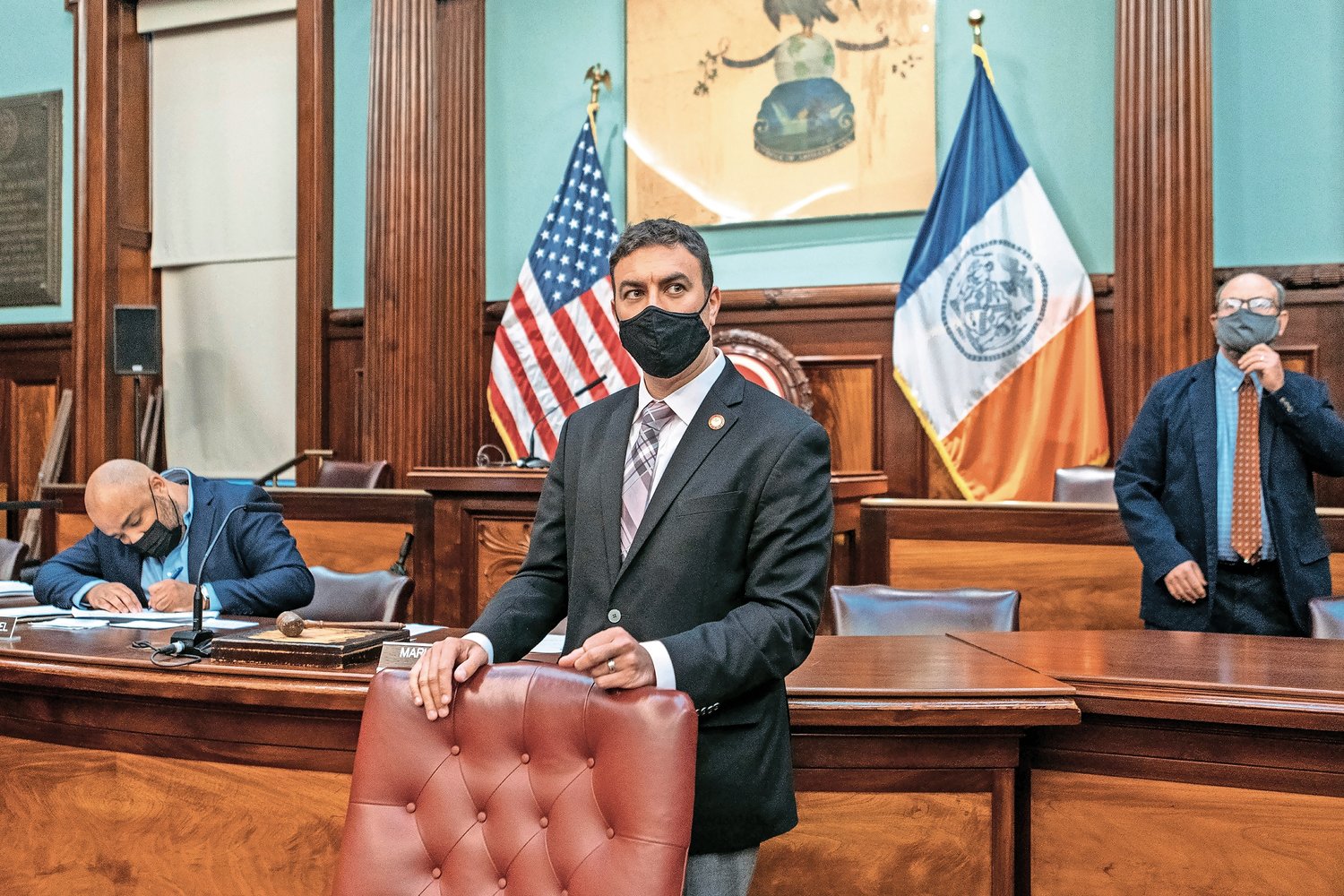 Councilman Eric Dinowitz believes the BDS movement aims to simplify a terribly complex and agonizing conflict occurring across the world from New York City.
Courtesy of NYC Council
Previous Next

The BDS movement aims to simplify a terribly complex and agonizing conflict occurring across the world from New York City — home to the largest Jewish population outside Israel.”
ERIC DINOWITZ, councilman
By STACY DRIKS

A pro-Palestinian movement similar to the 1980s campaign to end Apartheid in South Africa has reached a breaking point on CUNY campuses.

Known as BDS — boycott, divestment and sanctions — the movement seeks to end international support for what they claim are Israeli violations of international law by forcing companies, institutions and governments to change their investment and trade policies. The 17-year movement believes it can isolate the Israeli government and force it to stop what they believe is the oppression of Palestinians.

The issue at hand for many is whether the BDS movement is an example of anti-zionism and/or antisemitism. Those supporting BDS don’t categorize it as either. They want the Israeli government to stop holding Palestinians in the Occupied Palestinian Territories against their will, which they claim is a human rights violation. Pro-Israeli supporters believe it is both antizionist and antisemitic.

BDS supporters, which include the CUNY School of Law student government and professors and faculty, call for boycotting support for Israel’s “apartheid” regime as well as sporting, cultural and academic institutions. They are also asking banks, religious institutions, and pension funds and universities to withdraw Israeli-tied investments while pressuring governments internationally to ban business with Israeli settlements.

They also want to end military trade and free-trade agreements, and suspend the country’s membership both in the United Nations, and the international soccer federation FIFA.

The issue pits Councilman Eric Dinowitz against some members of the North Bronx grassroots social justice organizations, like North Bronx Racial Justice and the Westchester-based Jewish Voice for Peace.

On one hand, Dinowitz says, BDS threatens Jewish communities because the action by CUNY School of Law comes at a time when antisemitic hate crimes are on the rise.

“BDS seeks to deny Jewish people the right of self-determination and propagates anti-semitic tropes and conspiracy theory,” the councilman said.

Jonathan Tobin, editor-in-chief of the Jewish News Syndicate, suggests anti-zionistic individuals are not different from those who arwe antisemitic. In a recent edition of The Jewish Star — a sister publication to The Riverdale Press — Tobin wrote that “the right of Jews to build and live in security in their ancient homeland is rooted in international law, history and faith that cannot be negated by hate or political fashion.”

Dinowitz, however, said he won’t sit quiet, with plans to address antisemitism with CUNY’s higher education committee when it meets again June 8.

“The BDS movement aims to simplify a terribly complex and agonizing conflict occurring across the world from New York City — home to the largest Jewish population outside Israel,” Dinowitz said, in a release.

Those aren’t sentiments shared by social justice groups such as some members of the North Bronx Racial Justice and Jewish Voice for Peace. Members of both groups gathered outside Bell Tower Park last week rallying in the shadow of the Riverdale Monument  on the anniversary of George Floyd's death by police,  to protest the Buffalo shooting, and the killing of an Al Jazeera reporter Shireen Abu Akleh in the occupied West Bank last month. During the rally, Rabab Ibrahim Abdulhadi, Ph.D., director/senior scholar of Arab and Muslim Ethnicities and Disaporas Studies Program, spoke about BDS. She is a devout supporter of the movement.

“The support for Palestinian rights are increasing day by day, and many are coming from young folks from high school and college students,” said Steve Siegelbaum, a local member of both groups, who spoke personally not for the groups.

Boycotts are not limited to products, however. “Boycott, divestment movements aims to bring about positive change,” he added, saying that as far as Israel is concerned, “if we have one side, we have another side. One side is clearly the powerful side. The determiner (Israel) is clearly the side that makes the rules.”

Dinowitz believes the issue is not about one side having power over the other. It’s about the history of Israel and Jews.

After the pro-Palestinian student-led protest last year calling for the expulsion of Israeli faculty and students from CUNY, the issue returned to the forefront last month after CUNY School of Law professors and faculty endorsed the movement just before this year’s commencement. CUNY School of Law’s student government passed a resolution last December demanding institutional action in support of the BDS movement by ending CUNY’s Israel exchange programs.

It didn’t have the support of CUNY chancellor Félix Matos Rodriguez, however.

“To end all academic exchange programs with Israel is contrary to a university’s core mission to expose students personally and academically to a world that can be vastly different to their own,” the chancellor said at the time.

Rodriguez made clear these particular students do not represent CUNY as a whole. The chancellor says he wants to build bridges between the two groups of different backgrounds whose beliefs place them at odds.

The student government resolution also criticized some of CUNY’s food and beverage offerings they say violate Palestinian human rights. Hummus brand Sabra and Pepsi-Cola have both partnered with Israel in the past, they said, along with other brands and products.

CUNY’s law school move does appear to have some potential consequences. Brooklyn councilwoman Inna Vernikov wants the city to pull $50,000 in funding for the law school, calling its support of BDS to be antisemitic.

All Siegelbaum wants is peace, he said. But that doesn’t mean he’s antisemitic.

“Is criticizing America anti-American?” he asked. “Or Egypt Islamophobic?”