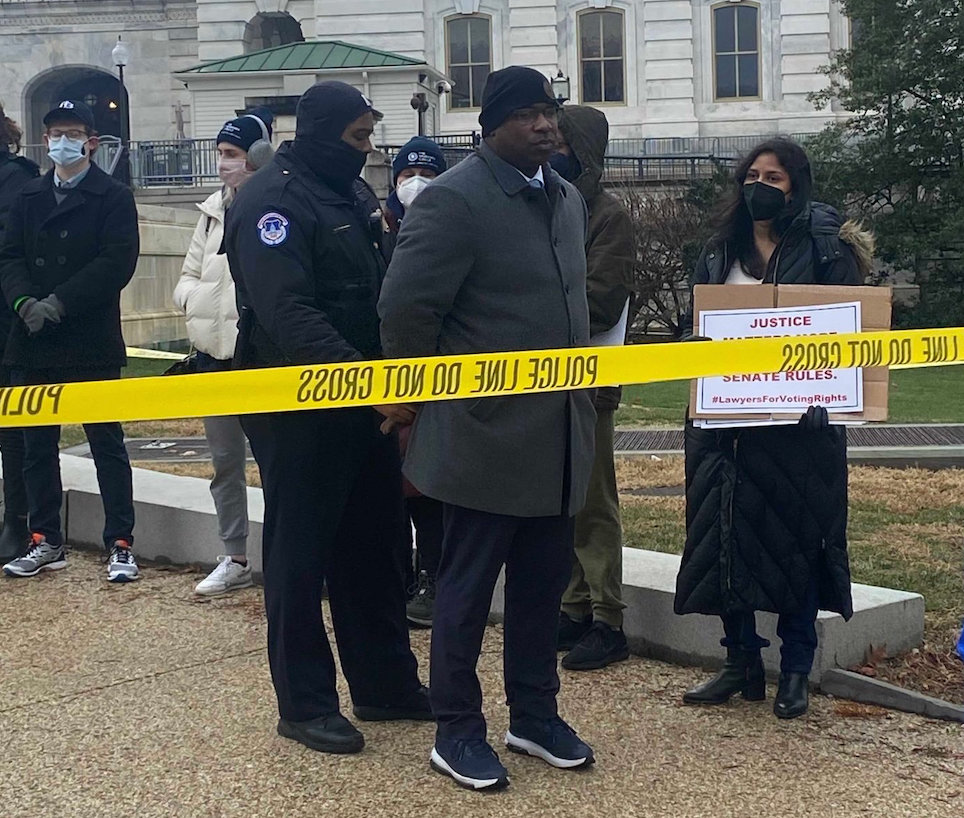 U.S. Rep. Jamaal Bowman was arrested Thursday outside the U.S. Capitol Building in Washington, after joining a small crowd there protesting for expanded voting rights in the country.

The congressman was among 20 arrested, according to his spokesman — a group that included faith leaders and some younger people who have been on a hunger strike.

"Today, Congressman Jamaal Bowman joined a voting rights non-violent direction action at the North Barricade of the U.S. Capitol Building and was arrested by the U.S. Capitol Police," according to Bowman's spokesman, Marcus Frias.

"We will provide more information and updates as we gather them."

Bowman had joined the protesters that morning, according to reports, after the U.S. Senate failed to pass a bill that would provide protections and expansions to voter rights across the country on Wednesday night. Bowman even posted his optimism the Senate might actually pass the bill — and why — ahead  of the vote, displaying what he described as more than 30 bills passed in 19 states that he says restricts voting rights.

"Organizers did their job," he said. "Now it's time for the Senate to do its job."

These are the 33 bills passed in 19 states throughout 2021 that restrict voting rights. There is a battle for the ballot box and we can't watch it from the sidelines.

Organizers did their jobs. Now it's time for the Senate to do its job. pic.twitter.com/mzdEnVQAvG

Markus Batchelor, deputy director of leadership programs for the progressive nonprofit People for the American Way, said Bowman was in the process of talking to the protesters and thanking them for coming out when Capitol Police arrested him.

Capitol Police later tweeted that the demonstrators were blocking one side of the North Barricade beginning around noon on Thursday, and they issued multiple warnings for them to clear the path.

"The demonstrators refused to move out of the driveway, so we are making arrests," the law enforcement unit reported on Twitter. They said they made 27 arrests for crowding and obstructing.

SEE: Bowman won't challenge arrest, but doesn't regret it either