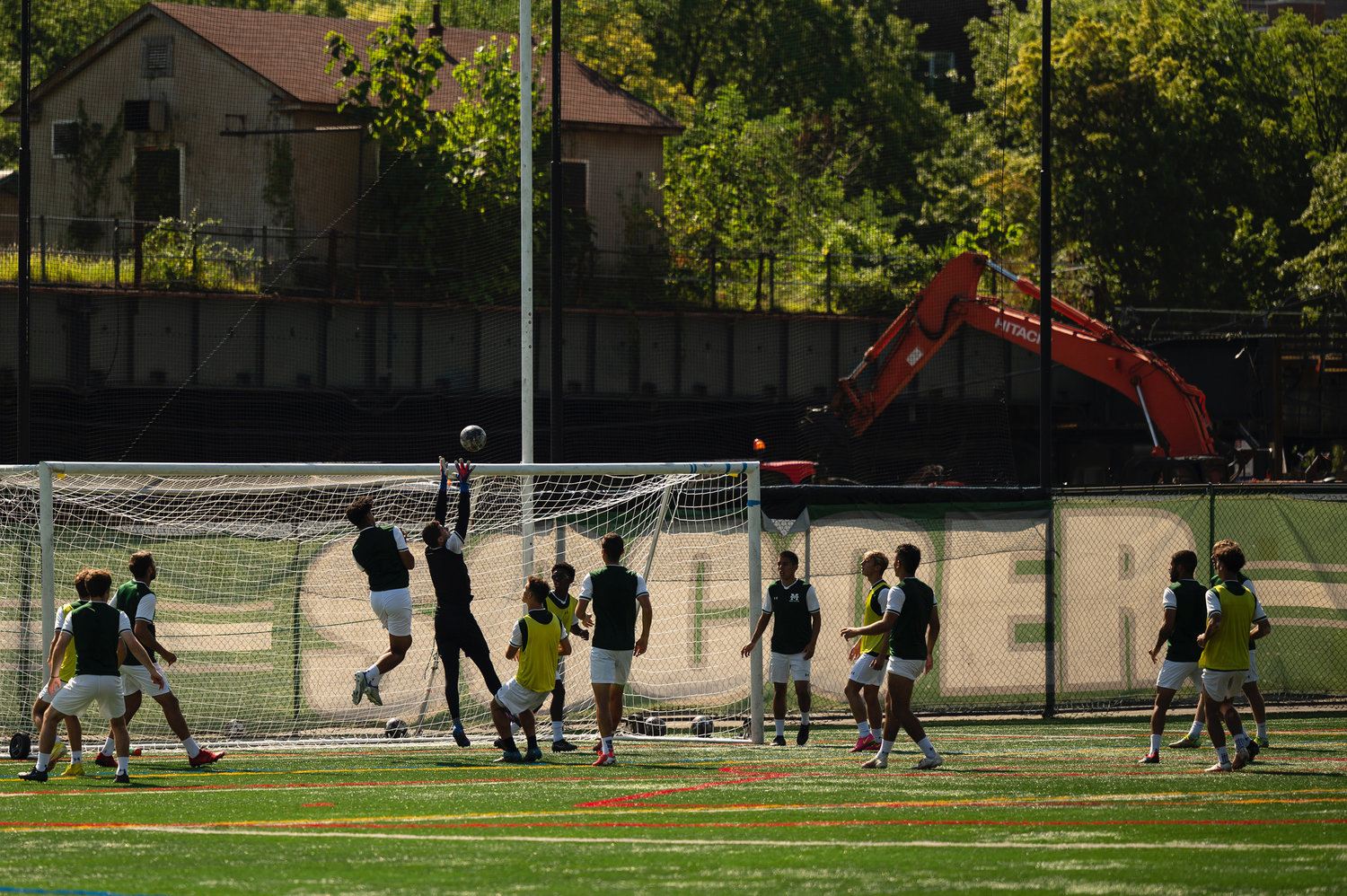 The Manhattan College men’s soccer team gets in a practice prior to its playoff opener against Fairfield University at Gaelic Park. The Jaspers won, 2-0.
Courtesy of Manhattan College athletics department
BY CAROLINE MCCARTHY

The Manhattan College Jaspers, who entered the Metro Atlantic Athletic Conference playoffs as the No. 3 seed, defeated No. 6 seed Fairfield 2-0 in the first round Sunday at Gaelic Park.

“Firstly, congratulations to Fairfield on a fantastic season, and it was a great game between two teams giving their all,” head coach Jorden Scott told Go Jaspers. “We work every day to be able to play in games like tonight, under the lights, with all our alumni, family, and friends in the stands.

“We are grateful for our school’s campus support and dedication to putting Jaspers soccer at this level of competition. I am proud of my staff and players for believing in the vision. We are not done yet.”

Gunnar Studenhofft crashed the net to score the first goal for the Jaspers in the 19th minute. A Fairfield defender passed the ball back to their keeper, James Anderson, who lost control of the ball when Studenhofft rushed in.

Later in the first half, Studenhofft got control of a long ball and found Da Silva, who scored the second goal for the Jaspers.

Manhattan kept possession for the majority of the match to earn the victory. They will play against second-seed Iona in the semifinals on Thursday in New Rochelle.

The Jaspers ended the regular season by beating Canisius on the road Oct. 22 in a 3-1 win.

Harry Bark scored his first goal of the season off an assist from Studenhofft and Vladimir Lee. Canisius tied the match shortly thereafter, but Da Silva and Henry Hamilton worked to take back the lead. Hamilton then scored a penalty kick for the Jaspers, his fourth such goal this season.

Later in the week, the Jaspers tied Saint Peter’s University in a 1-1 draw. Charles Roodlenscky of Saint Peter’s scored in the first 8 minutes of the match, assisted by teammates Tom Climpson and Reiss Skeen.

Noah Boyce headed in his first goal of the season to even the score off a cross from Hamilton.

The Jaspers finished their regular season with a 0-0 tie against Niagara on Oct. 29.

Manhattan College women’s soccer tied Cansisius last Saturday in a 1-1 draw on Senior Day. Both teams scored in the opening 45 minutes. The Golden Griffins scored first, with Mia Iacona getting control of the ball in the box in the 12th minute. Shortly after, Julia Nicholas crossed the ball into the six-yard box where Ianah Mackey put it in the net for the Jaspers.

In their second tie of the week, the Jaspers finished their regular season with a 2-2 draw against Saint Peter’s University.

“We loved the effort. It was about pride tonight and finishing the season strong. The team did that,” head coach Brendan Lawler told Go Jaspers. “Unfortunately, we didn’t get the win, but we asked them to leave everything on the field and start next season tonight, and they did that.”

Julia Nicholas and Caitlin Alcoba each scored a goal for the Jaspers, respectively. Brooke Zimmer and Mya Daniels tied the game for the Peacocks.

The Jaspers finished their season with a 3-7-5 season record and a 1-5-4 MAAC record.

The swimming and diving team fell to the much larger St. Francis College Brooklyn squad this weekend, with a final score of 163-87. This was the first home meet for the Jaspers since January 2020.

Mackenzie Tuttle came in first in both the 200 and 100-yard freestyle races with times of 1:59.39 and 57.21, earning the Jaspers 18 points. Kyla Guilfoil came in first place for her 29.23 second performance in the 50-yard backstroke race. Abbey Mink and Teddy Segmuller took first and second place in the 50-yard freestyle with times of 22.5 and 25.79.

Tuttle, Guilfoil, Shayna Millard and Mink won the 200-yard relay for the Jaspers with a time of 1:44.66, earning the Jaspers 11 points.

The Jaspers placed third in the 200-yard medley relay. Andrew Lebak, Joe Brennan, Cartagena and Islam Yousri raced a competitive 1:40.65 in this relay.

Volleyball lost 3-0 against Siena on Oct. 22. The Jaspers started the first two sets strong but ultimately lost their lead as the set went on.

“I think the team fought well and knew they gave it their all. [The next game] will be a tougher match because Marist is a more difficult matchup, but in the MAAC, who knows, anyone can beat anyone,” head coach Mauro Miletic told Go Jaspers.

Jasper leaders include Julia Menocal and Camila Gomez with 21 and 15 kills, respectively. Julieanne McKee earned an astounding 39 assists in the match, demolishing her previous record. Menocal and Kelly Markowski led the defense with 10 and nine digs, respectively.

The Jaspers play their last match of the season on Nov. 12 against Iona.

David Mlynek has consistently led the Jaspers. He shot an even par 70 at the tournament, finishing in 11th with an overall score of 218 (+8).

The Jaspers finished fourth at the Metropolitan Intercollegiate tournament with a total score 587 (+27) for the day. Both Mlynek and Lincoln Haymaker shot even par rounds (70). Mlynek finished the tournament at 141 (+1).

The men’s cross country team took seventh at the MAAC Championships, scoring 203 points as a team.

The Jaspers came in seventh at the MAAC Championship race with a team score of 211. Andria and Nicola Scaglione were the first to cross the finish line for the Jaspers, coming in 17th and 37th, respectively.

Bella Cannizzo finished 49th at her MAAC Championship debut, followed closely by Evelyn Gonzalez Valle in 51st and Fiona Mohl who finished with in 24:47.4.