Jaspers basketball team is picked No. 2 in preseason poll 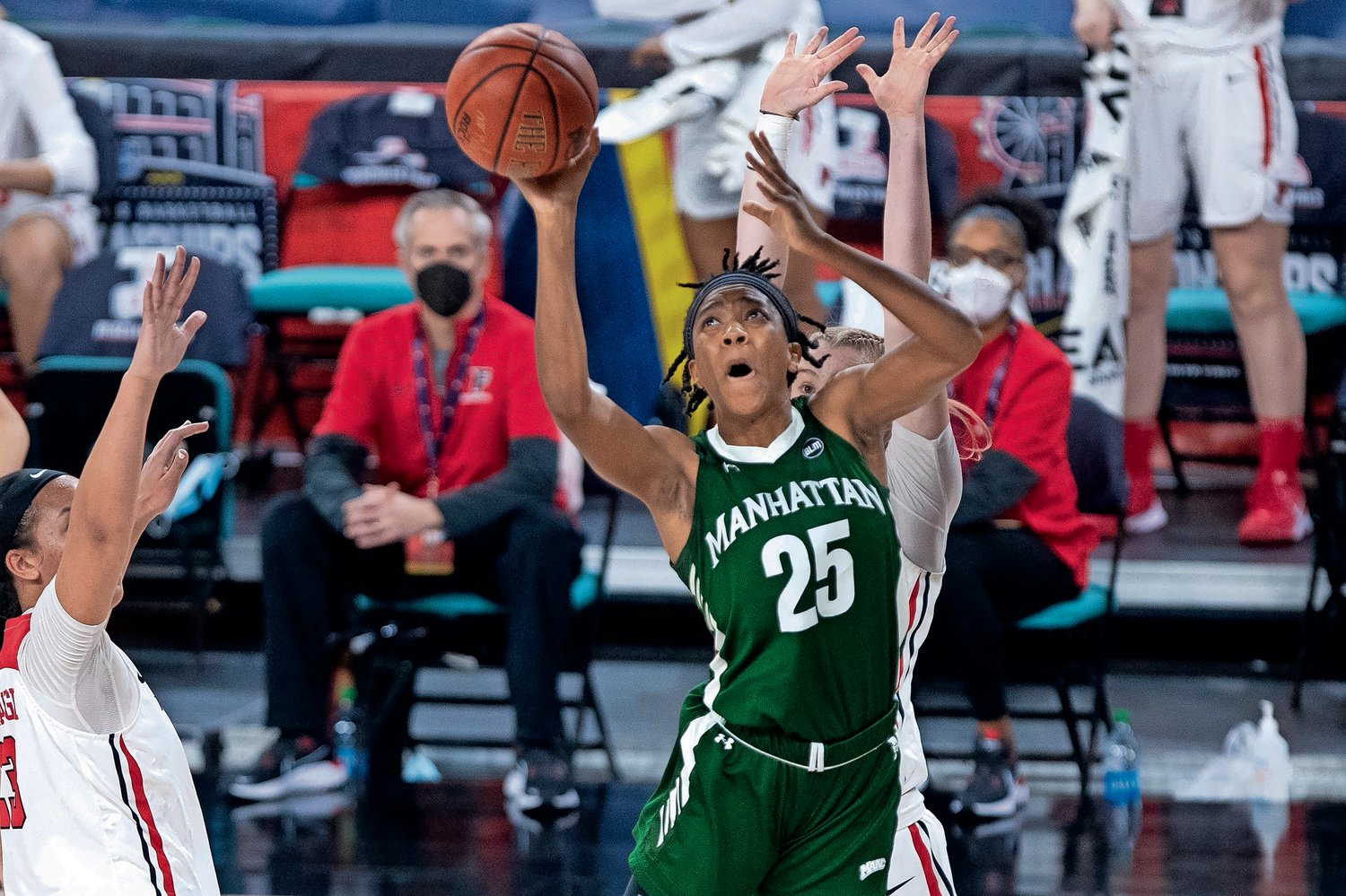 The Manhattan College women’s basketball team has been selected to finish second in the MAAC preseason poll. This year they are led by guards Dee Davis and Brazil Harvey-Carr.
Go Jaspers
By Caroline McCarthy

The Jaspers were edged out by Quinnipiac of Connecticut for the top spot, which received 117 points. Manhattan College received 112, including three first-place votes.

As for Davis, a Bronx product, she is one of three unanimous first team All-Mid Atlantic Athletic Conference selections. Her teammate Brazil Harvey-Carr earned second-team honors.

“I think Dee Dee and Brazil are two of the most dynamic and exciting guards in the MAAC,” said head coach Heath Vulin. “I’m very happy they were recognized for their talent, but knowing both of them the only accolade they want is to hold the MAAC tropy in March. Their talent and leadership to our program is extremely valuable.”

Davis was the second leading scorer in the conference with 18 points per game last season. She also pulled down 4.5 rebounds and dished out 3.2 assists per game.

Men’s soccer improved to a 4-1-1 in the MAAC this week after defeating the reigning champions, Marist College, in a 2-1 match.

Anthony Denis, a junior defender for the Jaspers, scored the game winning goal in the 73rd minute of the match.

After a scoreless first half, Marist’s Demarre Montoute was issued a red card, leaving the Foxes a man down for the rest of the match. Hugo Guerra then scored the first goal of the day to put Marist up in the 52nd minute. Vladimir Lee crossed the ball to Ensa Sanneh for the finish, tying the match before Denis’ goal defined the win for the Jaspers.

Later in the week, the Jaspers tied Quinnipiac in a 0-0 match at Gaelic Park. This puts the Jaspers at a 4-1-2 record for the MAAC season.

Manhattan College volleyball suffered another two losses this week to Iona and St. Peter’s University, putting their record at 1-20 with only seven matches left in the season.

The Jaspers lost all three sets to Iona on Saturday. Manhattan held its own in the first two sets but lost 25-22, 28-26 and 25-12. The Jaspers came back from an eight-point deficit in the first set after a time-out pep-talk from coach Mauro Miletic.

They went on to score the next nine out of ten points to minimize the gap to three points.

The Jaspers took a 14-10 lead in the second set, with seven kills from Julia Menocal and Camila Gomez. Iona tied the game at 23-23 and pulled ahead to earn the advantage with a kill from Jen Soto. Both teams battled for the needed 2-point lead to win, and the Gaels eventually succeeded. Gomez continues to lead the team with 15 kills and 16 points, Julieanne McKee had a new season high 25 assists and digs, and Teresa Garza scored 11 digs.

In a much closer match, the Jaspers lost 3-2 to St. Peter’s on Wednesday. Menocal and Gomez had a combined 44 kills during this match.

The duo won the first set for the Jaspers, battling the Peacocks to gain the ending 2-point lead. Menocal tied the game at 26 with a kill, Gomez scored the next point to give them the advantage, and Menocal won the set with an ace.

The Peacocks kept a steady lead in the next set, winning 25-20 after winning nine of the last 13 points.

Set three saw six kills from Menocal and Gomez each, and 11 assists from Sarah Emmons. Manhattan fell behind 12-7 before tying it at 15.

The Peacocks won the last two sets 25-20 and 15-10 with little resistance from the Jaspers.

Women’s soccer lost 2-0 at Marist this week, leaving them with a 2-3-2 MAAC record this season. Keeper Kim Mains was put to the test with 14 of the Foxes’ 23 shots in the first 45 minutes.

Mains had a season-high 11 saves for the Jaspers.

The Jaspers had a season-high 16 shots, missing multiple opportunities to score but could not execute for the win. Only five of the 16 shots were on-goal. Julia Nicholas and Nicolette Caneda both had shots blocked by the Red Foxes.

Later in the week, the Jaspers fell to Quinnipiac in a devastating 5-1 loss. The Bobcats scored within the first two minutes of the match and never looked back. Kim Mains and Audrey Johnstone each served a half in goal for the Jaspers, each with three saves.

The Jaspers will host senior day at Gaelic Park on Saturday at noon.

In their first event of the fall season, the Manhattan College women’s rowing team won first place in the 4+ race with a time of 15:00.3, defeating the second place team by a full 50 seconds.

The winning 4+ boat will compete next weekend at the Head of Charles regatta in Boston, Massachusetts.

“We definitely identified some areas of opportunity, but all boats had some incredible high points to their races and came off the water happy,” Kate Hickes, head coach for Manhattan, told GoJaspers.com.