Manhattan College men’s program has moved up to contenders 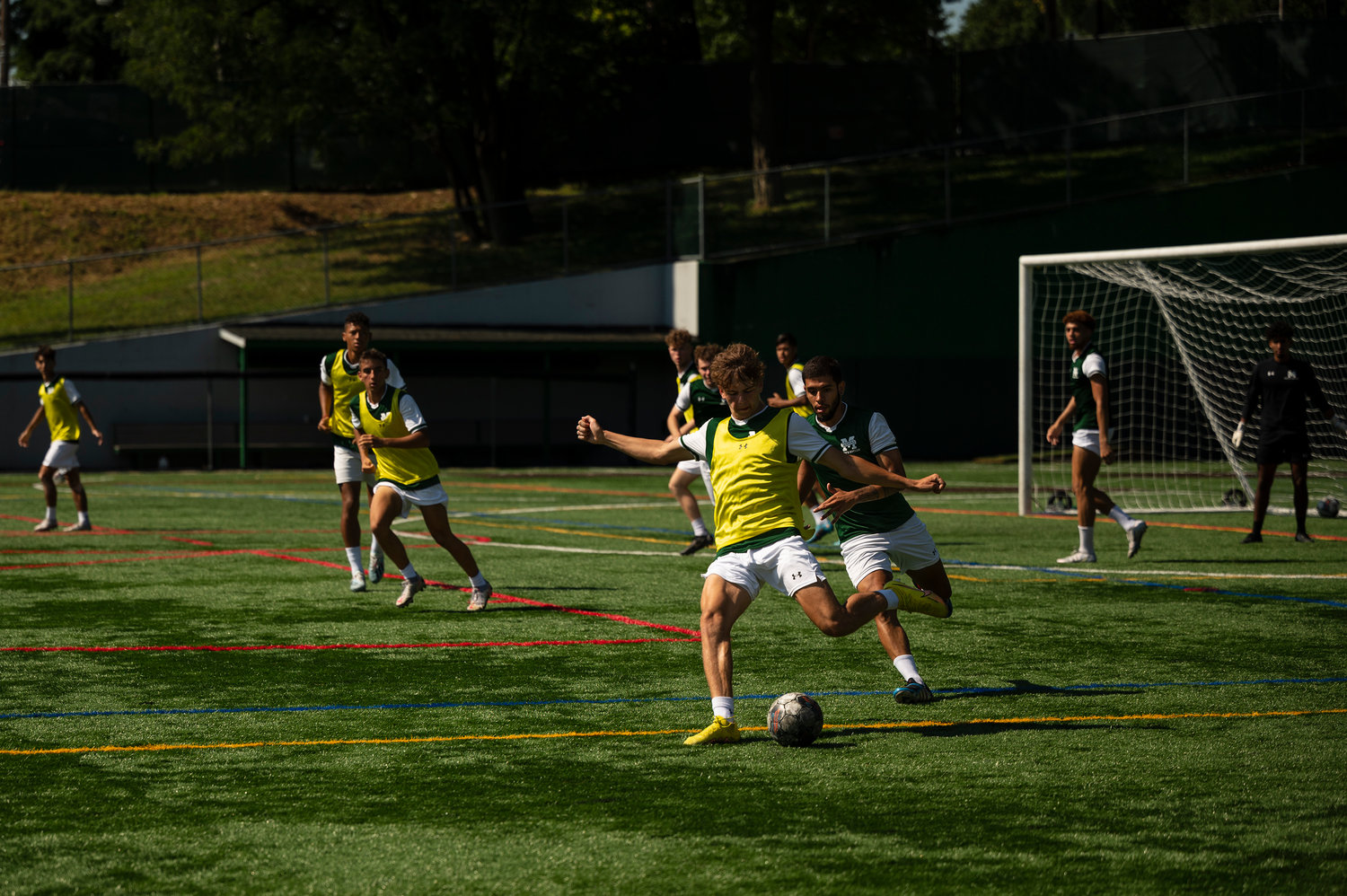 Manhattan men’s soccer is coming off a 6-9-2 record in 2021 and a loss to Marist in the quarterfinals of the MAAC Tournament. Head coach Jorden Scott took advantage of the offseason by assembling a 17-man recruiting class that saw four arrive early for the Spring 2021 semester.
Hiram Alejandro Durán 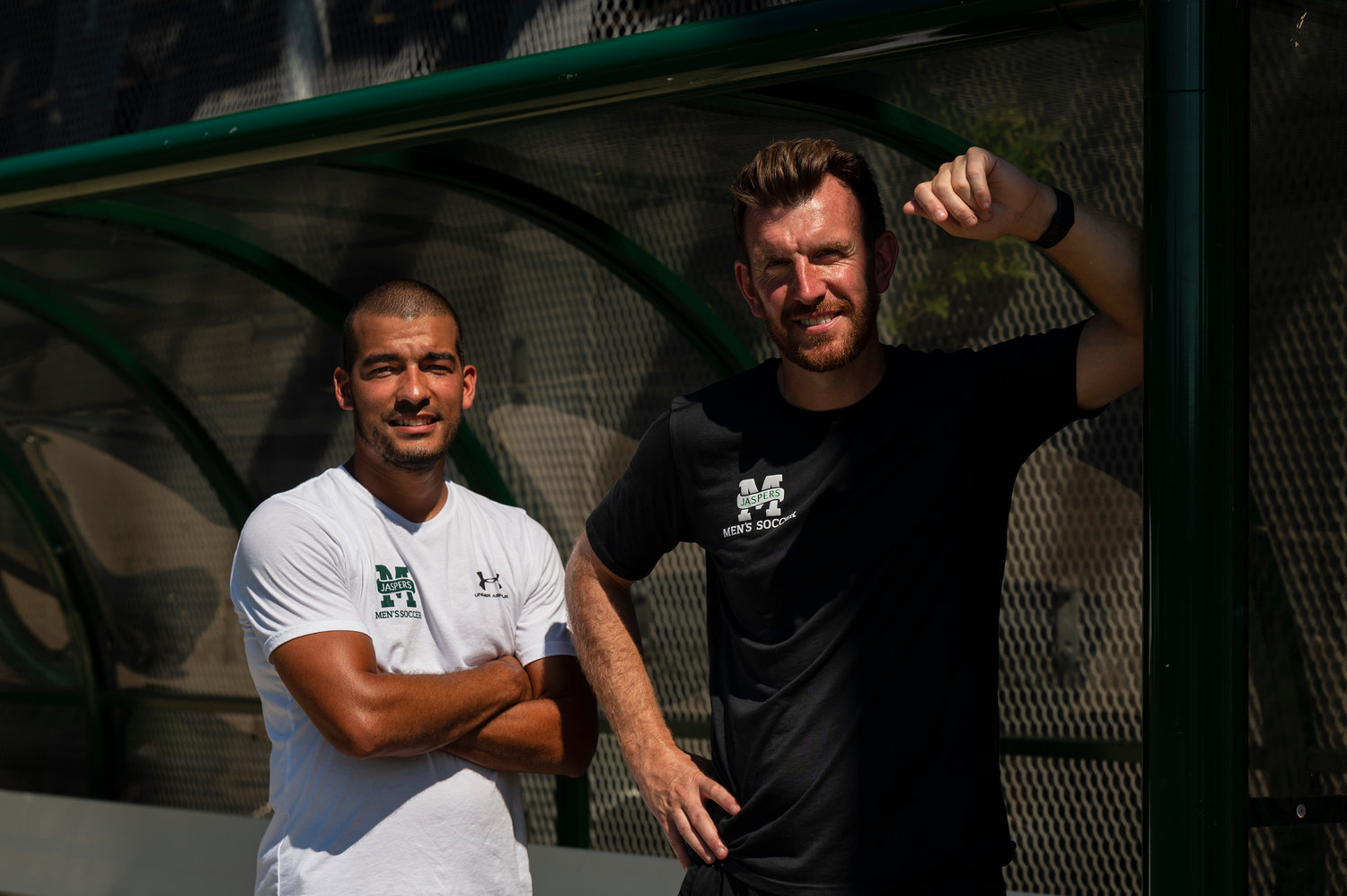 Jorden Scott is starting his 10th season in charge of the Manhattan men’s soccer program. Before the start of the conference schedule in late September, Scott is taking his team on the road to Washington D.C., and Philadelphia to prepare them for longer road trips later in the season.
Hiram Alejandro Durán
Previous Next
By Pete Janny

Championship cultures are not built overnight. Different players come and go but the mark of a winning team lasts forever. It takes a special group to make history.

When Jorden Scott took over the Manhattan men’s soccer program in 2013, the program had reached their nadir coming off a 3-12-1 season. A change in the narrative surrounding the program required Scott and his staff to get to work right away. This rebuilding process technically started when Scott joined as an assistant in 2010 and continued through a Cinderella run in the 2011 MAAC Tournament when the six-seeded Jaspers came one win away from an NCAA Tournament berth before losing to Fairfield in the finals.

In 2018, Manhattan racked up a program record 12 wins and garnered votes in college soccer’s national polls along the way.

Still, that ticket to the big dance remains the top priority. The difference between now and then lies in the significant upgrades made to facilities and the alumni support being drummed up by Scott. In 2019, the opening of the Gaelic Park Athletic Center granted the program one of five locker rooms for varsity sports teams. That addition and the replacement of new turf at Gaelic Park in 2018 has helped the team recruit.

“Every year we’ve made strides forward even if it was tough during the pandemic,” Scott said. “From 2017 to 2019 we made tremendous strides.”

This year’s team has a boatload of new pieces Scott is hoping to make a difference. The steady diet of adding international players continued while also welcoming more than a dozen players from around the country including six from throughout New York City.

“There is a good balance about the group from a tactical point of view,” Scott said. “They are very dedicated to all aspects of recovery, preparation, and dedication.”

There are four players each from France and New Zealand on the roster. Among the new additions is French center back Nassim Akki who is expected to fill a need on the backline after the lost multiple players at the position to graduation.

For Akki, his focus is on getting used to a new team in a new country.

“I have really good teammates who have helped me adapt,” Akki said about adjusting to Division One college soccer in America.

Scott emphasizes the importance of his upperclassmen to help lead the program to their first ever MAAC Championship. The veteran dynamic of the team includes a total of nine seniors and fifth years who have returned in light of the extra year of eligibility offered by the NCAA due to the pandemic. This concession of more eligibility has in turn created a free-for-all in the transfer portal in almost all collegiate varsity sports.

The Jaspers themselves have pounced on what has been made available to them. Having already recruited three players from Wellington Phoenix Football Club based in New Zealand, Scott went out and landed the services of Henry Hamilton, a midfielder who played his freshman season at national powerhouse University of Maryland.

“He has quick feet, is creative between the lines, and allows us to become more dynamic in the attacking phase of our game,” Scott said about Hamilton in a Manhattan College athletics website story. “We expect Henry to quickly become a major contributor on our team.”

The season kicked off on Aug. 25 with a 2-0 home win over the Holy Cross Crusaders of Worcester, Massachusetts, during a time when students were still returning from summer break.

Scott got a firsthand look at his squad in action led by his new starting striker Gunnar Studenhofft of the Cayman Islands. In his Jasper debut, Studenhofft deposited two goals in the back of the net using his speed both times to break down the Holy Cross defense.

“We brought in Gunnar in January,” Scott said. “He is a confident player and that will do the world for him and also help the team.”

With the opener behind them, the Jaspers are now looking to prove themselves as road warriors. In addition to the 4-2 loss at George Washington University in Washington, D.C., over the weekend, the team is headed to Philadelphia to play La Salle on Friday, Sept. 2. They will complete the trip with a match across the borough to renew the “Battle of the Bronx” against Fordham on Tuesday, Sept. 6.

That puts the team at 1-1 heading into La Salle.

“I wanted to take the boys away for some weekend trips to replicate what it will be like going to Siena or Niagara or Canisius,” Scott said. “Obviously get to stop off and see some historic places as well.”

Akki is looking forward to playing against Fordham for the first time in his career. The Jaspers will likely not need any more external sources of motivation for facing the Rams especially having won the last three meetings dating back to 2018.

“It’s a matter of defending our school and showing we are better,” Akki said. “It’s one of the most important games of the season.”

Senior striker Johan Velez broke onto the scene last season with five goals for second most on the team. However, none of that distracts him from what he hopes to accomplish this fall.

“I want to expand on last year and do better,” said Velez, who is from New Rochelle. “I am looking forward to helping the team as much as possible.”

The addition of graduate assistant Ornette Sanchez to the staff has provided a springboard to generating more interest around the program in addition to the momentum already started by Scott and his assistants Andrew Santos and Sean Reilly. Scott says Sanchez has been vital for reaching out to alumni about their upcoming lineup of events.

This season the men’s team has launched their inaugural Jaspers Soccer Supporters Club which offers access to players and locker room sessions after select home games and a discounted rate on apparel. The home match against Columbia on Sept. 9 is tabbed as alumni night when spectators will be joined by interim President of Manhattan College Brother Daniel Gardner.

Scott is grateful for Gardner’s support since he took over as acting president on July 1.

“We had Brother Dan come in to talk to the team,” Scott said. “That really motivated the players and has certainly raised our level of excitement and determination.”

For Scott, realizing how far they have come since 2011 is enough to bring a smile to the face of anyone who has spent time around them.

“Win, lose, draw we are going to do everything together,” Scott said.