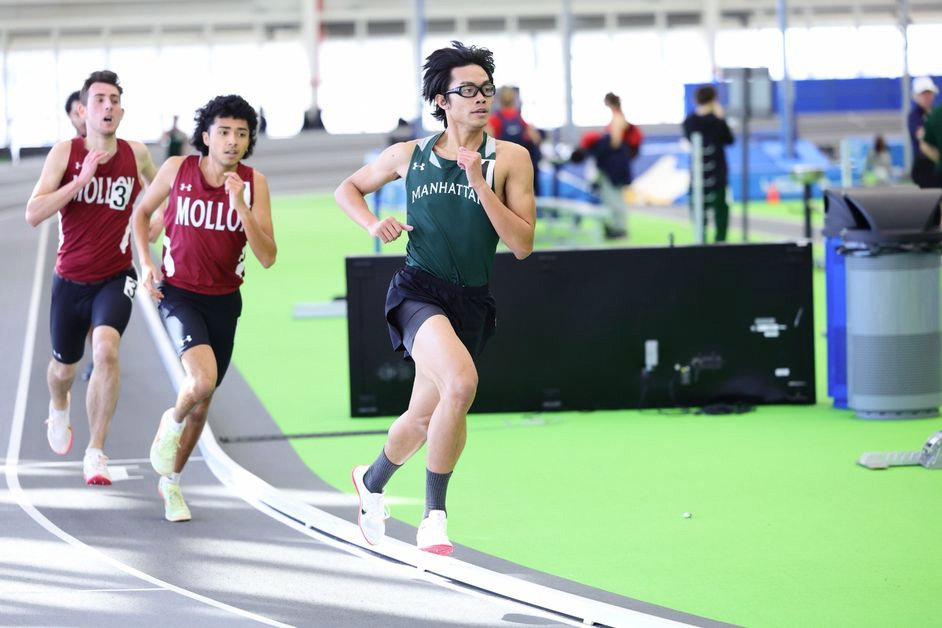 Brendan Chan, of Bronxville and graduate of Riverdale/Kingsbridge Academy, wins the 3000m race with a time of 9:24.24 at the MLK Tribute Monday in Staten Island.
Courtesy of Manhattan College/Vincent Dusovic
By Gary Larkin

After a month-long hiatus, the Manhattan men’s track and field team will return to Riverdale from the MLK Tribute Meet Jan. 16 on Staten Island, having swept the top three spots in the men’s 800m.

Michael Hennelly kept his momentum going from his strong cross-country season and a second-place finish at the Crowell Open, winning the mile in 4:21.71. Jaxon Newton took second in the event, finishing in 4:28.24.

In the field events, David Kema won the high jump with a mark of 1.90m. RJ Decker won the weight throw, topping out at 18.97m. The final results of the event looked the same as the 800m, with the second and third also belonging to the Green and White, with Myron Corpuz (14.63m) and Joseph Pelio (13.95m) taking the other two spots.

The Jaspers race again this week, running in the Ramapo Opener at The Armory on Friday.

Manhattan men’s basketball trailed by eight with 8:44 left before outscoring Mount St. Mary’s 22-9 over the remainder of the game to pick up a 62-57 road win in Emmitsburg, Maryland, Friday night.

“We stayed together,” said interim head coach RaShawn Stores tonight on what he saw from his team in the second half. “I am so proud of this group for believing in one another. That is all you can ask for.”

Josh Roberts gave the Jaspers the lead for good with 92 seconds left on an offensive rebound put-back after Ant Nelson missed a driving layup down the right side of the lane.

Marques Watson started a 10-3 run with an up-and-under layup to tie the game at 54 with 2:22 to play. Roberts’ put-back followed before Nelson scored the final six points for Manhattan.

Logan Padgett scored 12 of his 14 points after halftime. Padgett scored the first four of the second half for the Jaspers. Padgett then tied the game at 52 with a corner 3-pointer from in front of the Jasper bench.

Roberts tallied his second double-double of the season with 14 points and 13 rebounds. The Alabama native added two steals and two blocks. Padgett’s 14 points were a new career-high for the forward.

“Ant and Josh are continuing to lead us,” Stores added. “They have played big games, know what it is about, and are an inspiration to their teammates. We kept believing in Logan and told him to keep his head up after a slow start.”

“We had to get gritty. That was my message to the guys,” said Nelson after the comeback win. “I was able to pick apart the defense tonight and find my teammates, but I have to do a better job of taking care of the ball.”

Mount St. Mary’s was led by George Tinsley with 18 points. The Mountaineers were held to 30-percent shooting in the second half.

The Jaspers forced 17 turnovers and converted those into 21 points.

The Jaspers return to action on Friday, when Iona visits Draddy Gymnasium at 7 p.m.