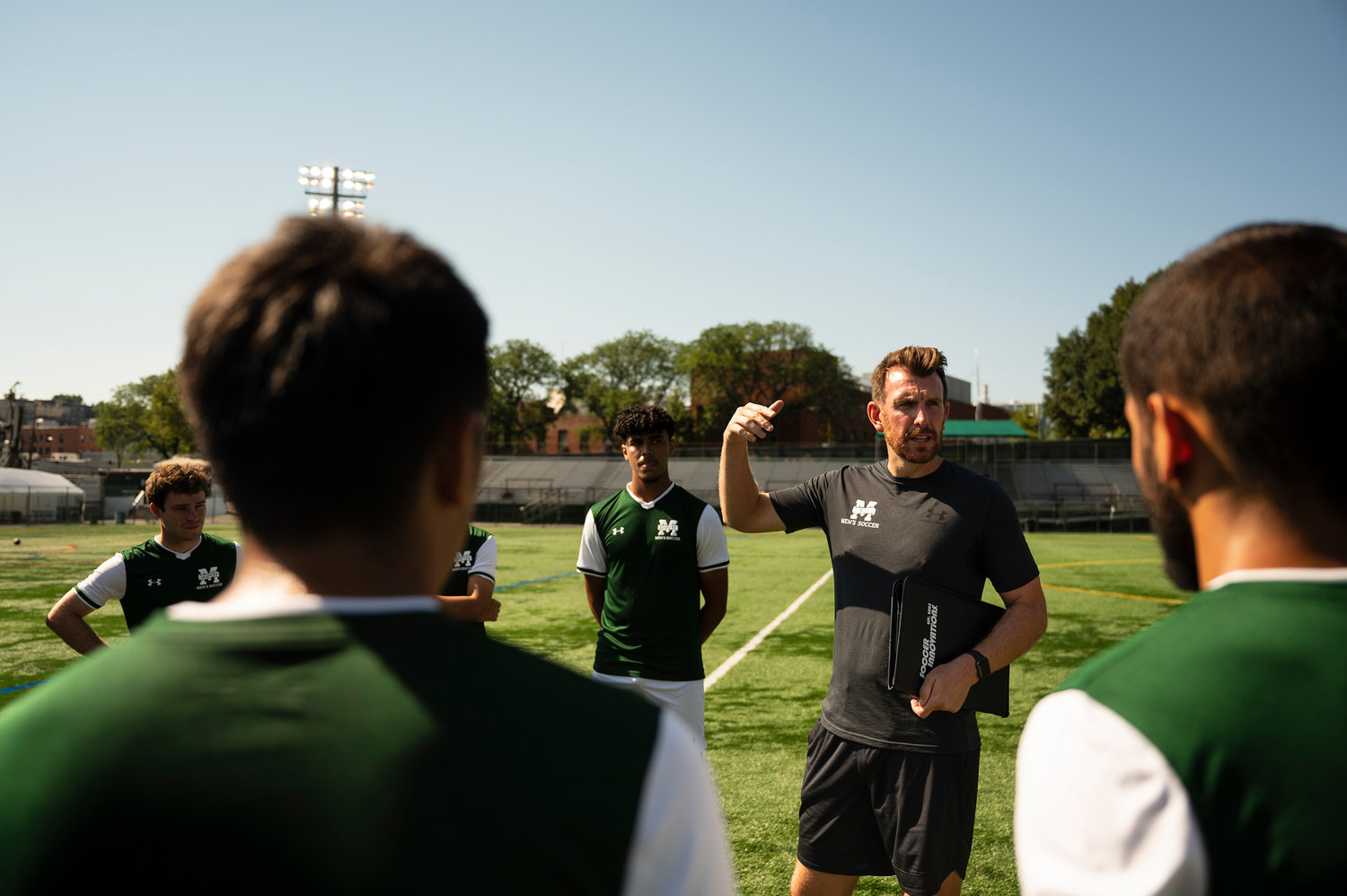 Head coach Jorden Scott and the Manhattan College men’s soccer team have unfinished business this November after suffering season-ending losses to Marist in 2019 and 2021. The Jaspers have secured the third seed in the upcoming MAAC playoffs.
Hiram Alejandro Durán
By Pete Janny

The Manhattan College men’s soccer team has their eyes on the prize. And that wasn’t just the No. 3 seed they earned.

Rather, a postseason run that could crown them MAAC champions for the first time in program history after posting a 7-4-6 record during the regular season.

That journey begins on Sunday at Gaelic Park, where Manhattan is undefeated this season with five wins and three ties. Home field advantage for the Jaspers is real and no one realizes that more than the players. For now, they will take their home field over the bye.

“Our mentality is huge when it comes to playing at home,” said senior striker Ronaldo Da Silva, who netted four goals in the regular season. “We know we are not losing here… it’s just something that is not going to happen.”

After winning four of their first six MAAC games, the end of the conference season for the Jaspers looked closer to how the non-conference started. They tied in three of their last four games, with the other result being a 3-1 win at Canisius on Oct. 22. The regular season finale last Saturday ended in a scoreless draw with Niagara on Senior Day.

Manhattan boasts a skillful line of attackers who used the regular season to develop chemistry on and off the pitch. Whatever is left in the tank from an attacking unit headlined by Da Silva, Johan Velez, Gunnar Studenhofft and Henry Hamilton will look to help build on the 28 goals the team has scored across all competitions. Those four players have combined for 19 goals led by Hamilton’s six, and the high quality they have shown at times has become the standard, but not yet the finished product.

“When we turn up we know no one can handle us,” Da Silva said of Manhattan’s attack. “We know what we have to do.”

The Jaspers defense thrives at nagging opposing offenses for 90 minutes. The Manhattan backline conceded a total of 16 goals in 17 games, which represents the lowest per game rate at preventing goals in the MAAC at a tick under one per contest. Conference opponents scored a grand total of five goals against Manhattan. On eight occasions this season the Jaspers shut out their opponents.

“We know that we are strong and have a good defense,” said junior center back Anthony Denis. “Other teams know it’s going to be tough for them.”

Manhattan was the lone MAAC team not in action on Wednesday night when the regular season officially ended for the 11-team league. Manhattan’s bye coincided with the final week of the season, giving heacd coach Jorden Scott and his team more time to prepare for what Sunday will bring.

According to Scott, the coaching staff won’t speculate whether eight days off is a blessing or curse. They are trusting the process, thanks to the help of a data-driven player technology which helps schedule load management, or recovery procedures, on a daily, weekly and monthly basis.

The data informs their approach to load management and had them prepared to build back up under the scenario of the eight-day break they have or the 14-day layoff they almost had with a bye.

“We were going to be in a really funky period of trying to calculate how we bring the boys down and lift them back up progressively,” Scott says about the tradeoff his team likely favored by not ending up with the bye.

Manhattan is as healthy as they have been over the past few seasons too, which Scott credits to advancements in this player technology. The team is deep heading into the postseason.

“We’re going in with as strong a team as we had all year,” Scott said. “And so that speaks to the training plan.”

The Jaspers remember all too well the memories of losing to Marist on the road in both 2021 and 2019. With the fan support behind them this time on Sunday, Scott can’t help but anticipate something big will happen.

“They know they are good enough to win this whole thing and I believe it too.”

Sunday is the first step of what could be a memorable November. A fourth game, if it comes, would mean a trip to the NCAA tournament.