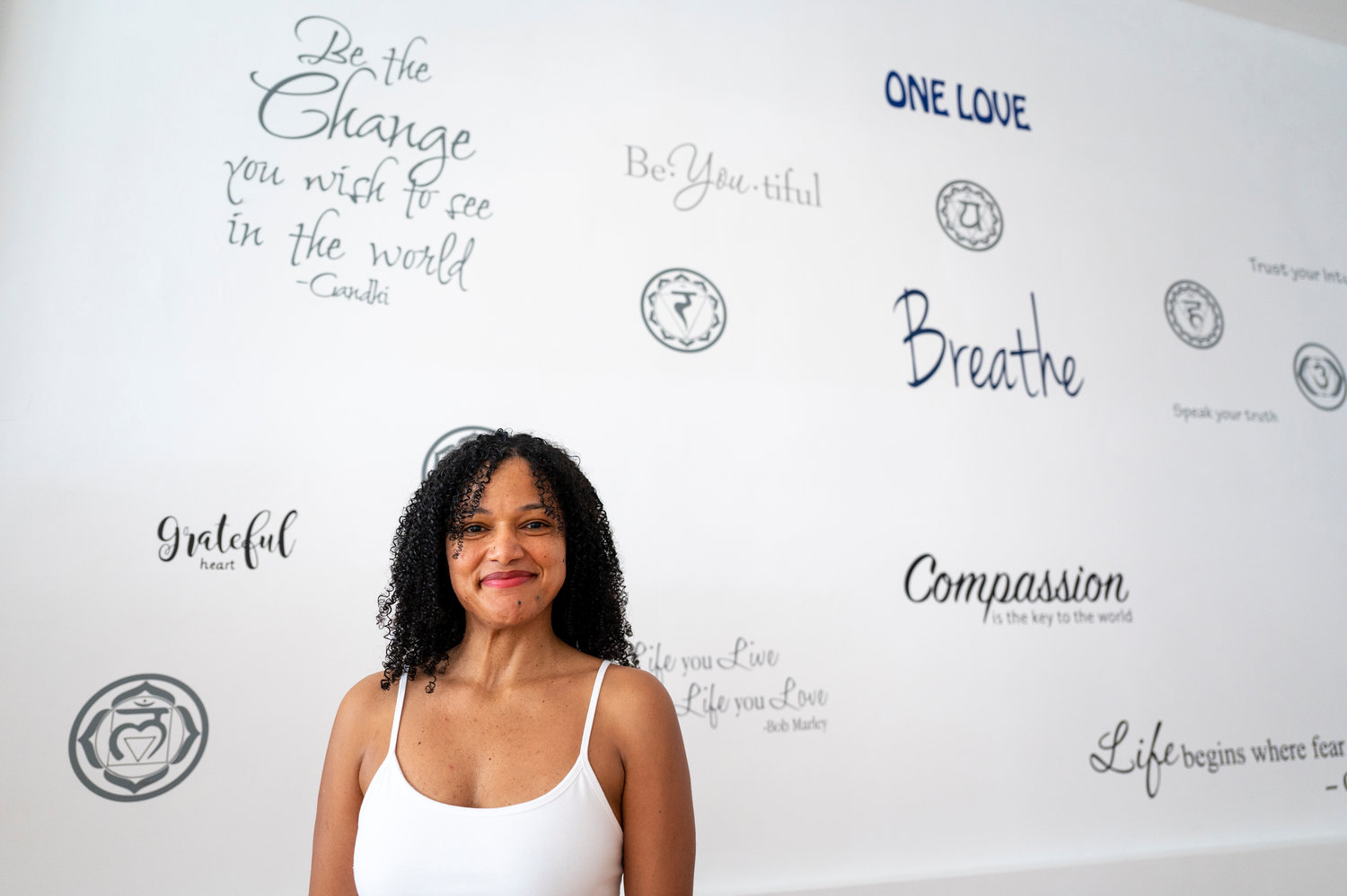 Eduvigis Marmolejos’ business, One Yoga for All, was closed throughout most of the coronavirus pandemic and only reopened this past May. Marmolejos’ pandemic struggle inspired her to start a pop-up market for small businesses and artists in the community she plans to run out of her Johnson Avenue studio once a month.
HIRAM ALEJANDRO DURÃN 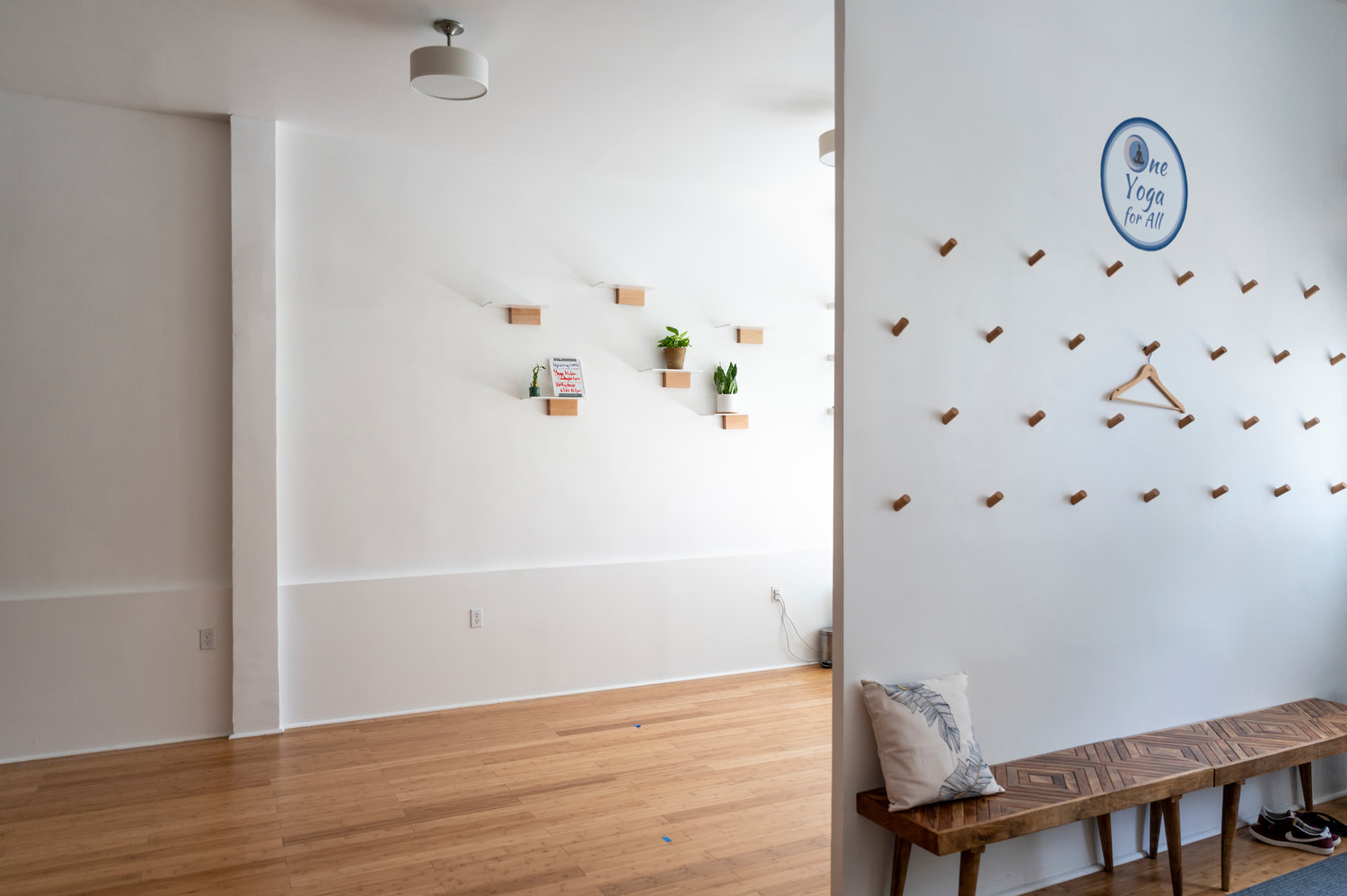 The One Yoga for All studio space on Johnson Avenue will soon be home to a monthly pop-up market for local artists and businesses, says its founder, Eduvigis Marmolejos. The studio can fit up to 10 vendors who can sell homemade crafts like candles and jewelry as well as food.
HIRAM ALEJANDRO DURÃN 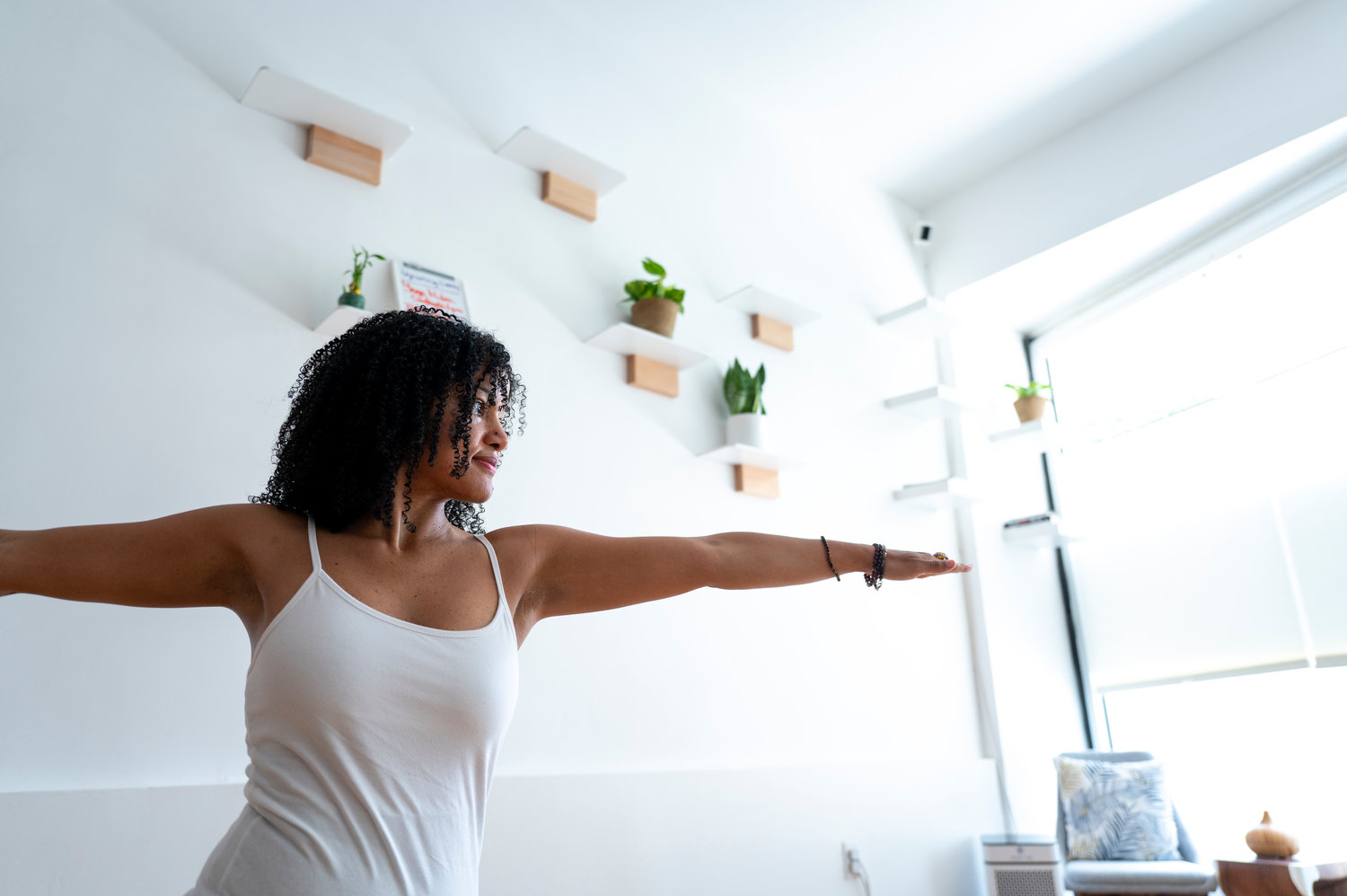 One Yoga for All founder Eduvigis Marmolejos will use her studio space at 3264 Johnson Ave., to host a pop-up market for small businesses and artists in the community. Marmolejos wants the market to be connected to the mission of the yoga studio overall, maintaining a wellness theme.
HIRAM ALEJANDRO DURÃN 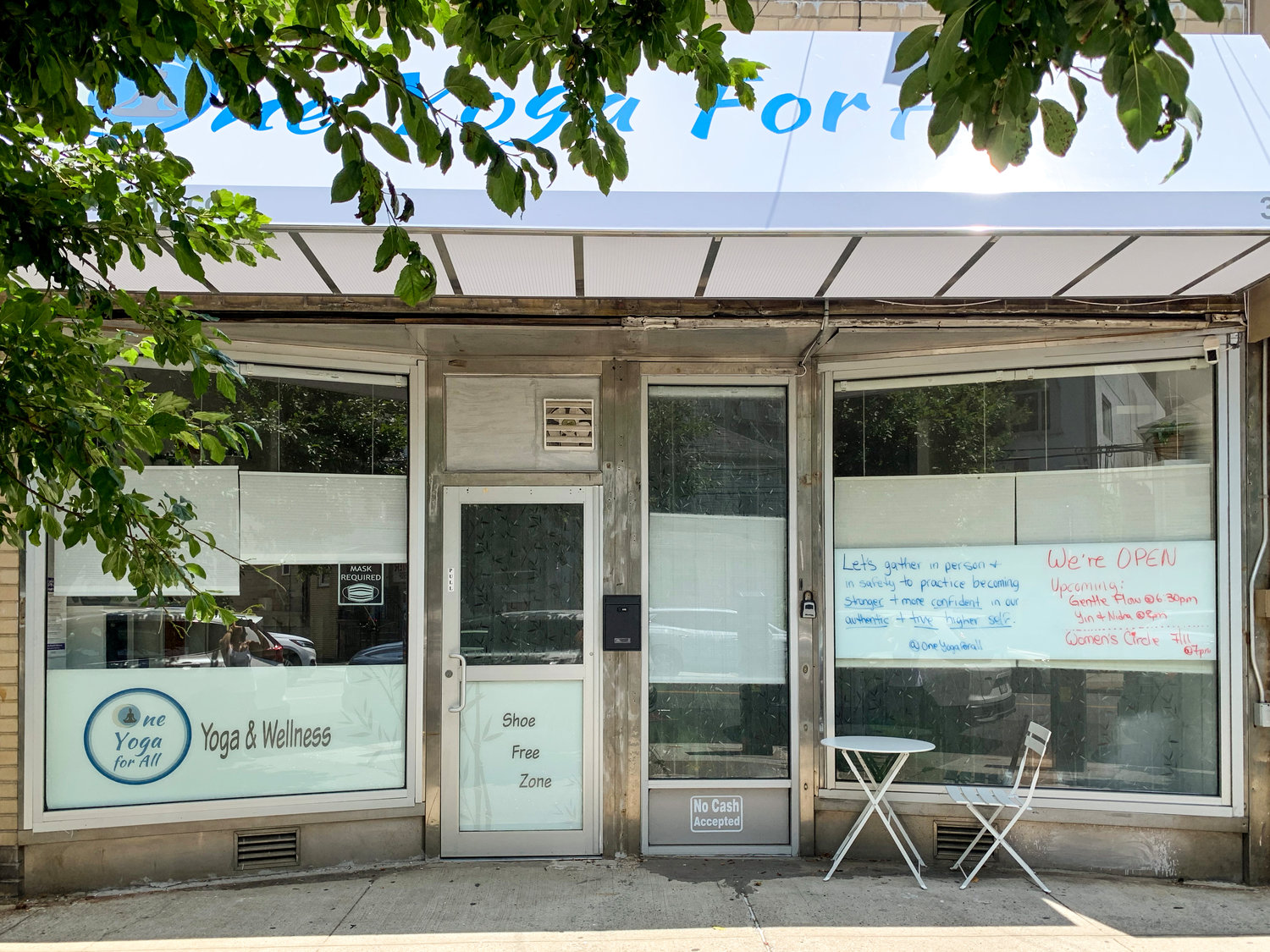 Eduvigis Marmolejos plans to use her Johnson Avenue One Yoga for All studio space to host a monthly pop-up market for area artists and small businesses. At first, Marmolejos will hold the market indoors, but is looking into the city permit process that could allow her to expand onto the sidewalk in front of her studio space.
Courtesy of Eduvigis Marmolejos
Previous Next
Become a vendor

One Yoga for All is organizing a pop-up market in its 3264 Johnson Ave., studio space.

Local creatives, artists and small business owners associated with wellness overall who are interested in participating can email info@oneyogaforall.com with subject “pop up.” Potential vendors should include their name and the product they’d like to offer during the monthly outing.

It wouldn’t be an understatement to say Buunni Coffee had a sizable impact on the neighborhood before shuttering last January. Many saw it as a community hub where they could not only get a cup of joe, but also spend hours connecting with neighbors.

Eduvigis Marmolejos was one of Buunni’s devoted fans. In fact, the owner of One Yoga for All on Johnson Avenue says she was often inspired by the Buunni’s ability to bring the surrounding community together despite their differences. And this really showed when that same community rallied in the weeks before its closing to keep Buunni open — a fight ultimately lost.

“I was always supporting them because they were truly an example of the community — or what community should be,” Marmolejos said. “They were always inspiring.”

After that January rally to save Buunni, Marmolejos realized she, too, could create more of a support network among her fellow businesses. In fact, it was top of mind for her during the pandemic when many of those same businesses — including her own — struggled to survive.

Her idea? Use her studio space to bring together fellow entrepreneurs, creating a monthly pop-up market focused on wellness.

The yoga business in particular took a hit during the pandemic, especially because it’s a practice that generally requires in-person interaction. With her newly expanded studio space closed for more than a year, Marmolejos was forced to teach yoga through the Zoom online videoconferencing app.

As a result, some of Marmolejos’ yoga instructors — and even some of her clients — developed side hustles to bring in some extra cash.

“I know a lot of my clients turned into small business owners throughout the pandemic,” Marmolejos said. “Some of them became candle creators. Some of them sold jewelry. We just talked and chatted a little bit about how to work together, how to be more of a community.”

Her monthly pop-up market idea is to give small businesses who don’t have bricks-and-mortar stores a physical space to sell their products.

“There’s a privilege that I have, having a storefront, with just people walking by,” Marmolejos said. “And I want to give (other businesses) the same opportunity. So, these are people that don’t have a storefront, they probably have an Instagram account, and they’ve been selling it through there. Or perhaps even an Etsy website.”

At least in the beginning, the market itself will be contained inside the walls of One Yoga, located at 3264 Johnson Ave. It’s a space, Marmolejos said, is big enough for up to 10 vendors. Yet, she’s also researching the city’s permit process to see if she can expand the market out onto the sidewalk in front of the studio.

One way or the other, Marmolejos hopes to launch the pop-up market later this month, and continue it every month from that point forward

The market Marmolejos envisions will provide a little bit of everything, from homemade crafts to food stands. She expects she’ll have to rotate different groups of vendors into the market every month, based on her limited space and the large amount of interest she’s already received from potential vendors.

Alexa Rivera is one of Marmolejos’ yoga clients who plans to sell her homemade candles through the pop-up market. The Marble Hill resident started her business — Soy Vida Candles — during the pandemic to distract herself from the stresses of her day job.

That’s because Rivera saw much of the coronavirus firsthand working in outpatient registration at the New York-Presbyterian Allen Hospital just across the Broadway Bridge.

“Working through COVID and seeing all these patients come in and passing away, I just needed an outlet,” she said. “You know, something else to occupy my mind and my time. So that’s how it all started.”

Rivera chose candlemaking because she’s always found lighting a scented candle to be a good way to relax after a stressful day.

Up until now, Rivera’s made her candles at home — a process that takes several hours depending on the size of the batch. And she’s mostly been selling them to friends, family and colleagues at work. So she’s looking forward to the opportunity to sell them in the pop-up market.

“I’m very excited,” Rivera said. “It’ll be another fun experience. A lot of people, I believe, like candles. They like the scents. Some scents bring them memories of their childhood, you know?”

Nyota Nayo works at the yoga studio as an instructor. She also plans to join the inaugural pop-up market this month to sell jewelry. Nayo works as an “independent consultant” for Paparazzi Accessories, which sells — among other things — performance jewelry that dancers and other performers can wear during a show.

Nayo also works as a dance instructor and as a doula — a non-medical birth worker — both professions she said can involve performance jewelry.

Nayo, who lives in Long Island but spends some time in Riverdale, has mostly been selling the jewelry to her clients and through Facebook. Often traveling for work, Nayo said she’s excited for the pop-up market so she can present her jewelry in one physical location.

“I’m so much all over the place,” Nayo said. “So sometimes it’s good to just be in one place. That promotion in one place is very good.”

While these different products may not seem connected, Marmolejos said everything in the market will share a common theme: wellness.