A journey into horror, and the man who survived it all 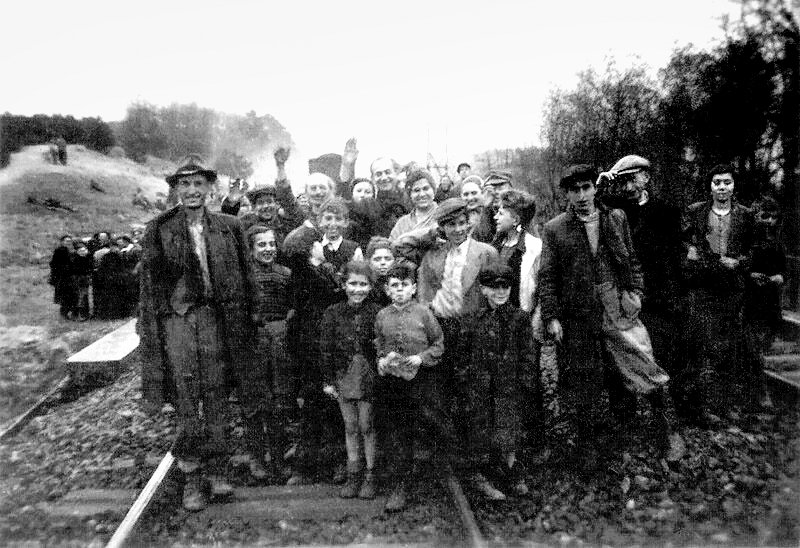 Though many could barely stand because of disease malnutrition, survivors from the train posed happily to show their gratitude to the soldiers who had liberated them.
File photos courtesy of 30th Inf 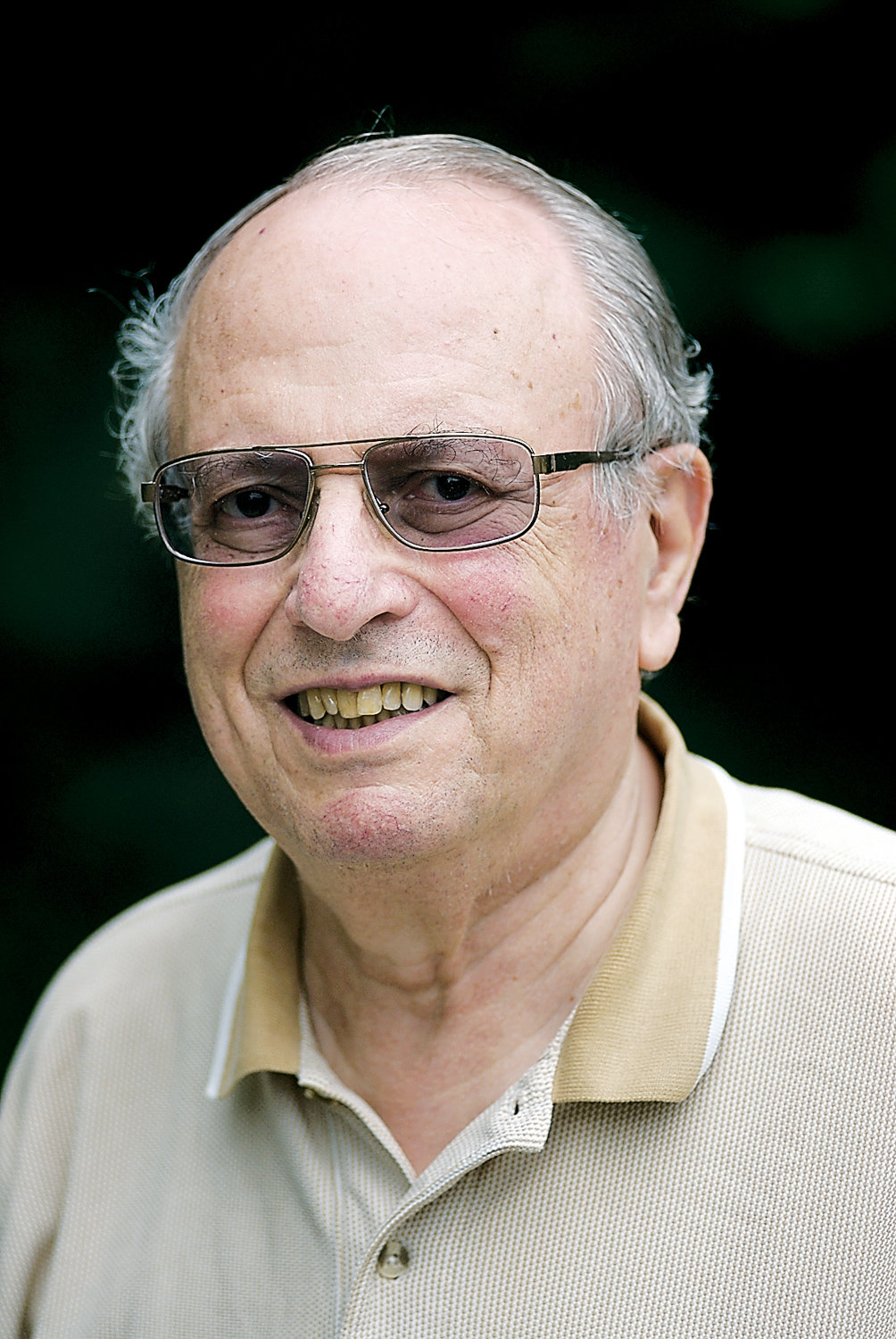 Martin Spett was deeply involved in the Holocaust, Genocide and Interfaith Center at Manhattan College. A Holocaust survivor himself, he painted scenes from his childhood in Poland and later the concentration camps. Spett died Oct. 20. He was 90.

For many years, following the advice of his father, Martin Spett shared little if anything about how he survived the Holocaust in Poland. That changed in the early 1980s when a French academic, Robert Faurisson, began publishing opinions denying the Holocaust actually happened.

After that, Spett joined many others to tell their stories about the Holocaust as a way to provide living witness to what happened during World War II, in the hopes that such atrocities would never happen again in any lifetime.

One of the people he shared his story with was then Riverdale Press editor Jason Fields, who published Spett’s accounts over a two-week period in July 2010 — parts of which we’re including here in honor of Martin Spett in his passing earlier this month. He was 90.

The Germans have come

Martin Spett is hiding in a hastily, secretly built attic in a woodshed. It is 1939, and the men in gray uniforms, in black uniforms have come to Tarnow.

There are 40,000 Jews in the Polish city, and thousands of them have been marched to the Jewish cemetery, of which he has a clear view. His father tells him not to look, but Martin is a child, and the slits between the boards of the shed afford a perfect vantage point of death.

It’s not quick. It can’t be quick. There are too many to kill. It is four days of bullets. Four days of senseless screaming, begging and blood. By dark, Martin’s mother — protected by a slip of paper, her American birth certificate — visits him and his father, bringing what food she can from home, where she waits with his sister.

After four days, the Nazi thirst is sated. More than 7,000 are dead. Many more have been loaded onto trucks, with scarce room to breathe. No one knows where they will go.

A place to hide

Martin’s father, who works in the city’s tax department, has gotten word from a colleague that another deportation is coming. Martin and his father flee to the hiding place that has been prepared under the floorboards of a lumberyard. Right outside, Polish fascists and German troops have gathered men and women from the ghetto and begun to slaughter those not loaded on the trucks.

Two Poles come into the building where the Spetts are hiding, to relieve themselves. They stand above Martin as they urinate, one man saying he wouldn’t bother handing over any Jew he found to the Germans. He would use his ax to do the job himself.

Martin Spett would remember, many years later, that when he emerged from hiding, he smelled like “roses.” His father turns to him and tells him that it is Yom Kippur, the holiest day of the Jewish year.

Years have passed. Years of hunger, fear and cold. Years of being crowded together in small rooms in a ghetto.

There have been many more deportations and deaths. At 13, Martin Spett has watched it all. He is changed, as is everyone. Death is random and comes quickly by the bullet, or slowly by illness and malnutrition.

At this time, Martin is kept apart from his father and sister, living with his mother in Ghetto A, divided by a fence from Ghetto B. In one are those who can still work, who have the strength to continue to support the Nazi war against “inferior” life.

In the other are the young and old, the weak, many of the children, the crippled, the pitiful, those with nothing left to contribute to the German machine of death.

There is a rumor that is stronger than a rumor. The camp Martin’s father and sister are in is to be liquidated. “Liquidated” is a strange word for “death.” It’s a calm word, a bureaucratic word. It is almost clean.

Martin’s mother decides she will sacrifice anything to save them. Martin boosts her up the six-foot fence between the ghettos, and clambers up behind. Finding the place where his father and sister are living, Martin turns over his employment card to his father, and joins his sister at the bottom of a wicker trunk. It is the only way back to the living.

Two strong men are hired, the fare paid in food or a trinket or anything left to the Spett family after so much has been taken.

The lifeboat arrives at a gate, and it’s only the Jewish police who stand between the family and life. When they halt the small caravan, Martin’s mother breaks into wails and screams. She shouts to the guard about her “precious heirloom china.” Her performance, she knows, is the razor’s edge her daughter and son are perched upon.

Perhaps it’s her shrill tone. Perhaps it’s a second of kindness amid the blood and brutality. She is told to take her “heirlooms” and go. Just go.

Martin later calls it a miracle. The police never asked to look in the trunk.

A wicker trunk, unfortunately, would not be enough to stave off the Germans some time later when Martin wakes up early to go to work, and while standing over the multiple people sleeping in his room, glances out the window to the world beyond the ghetto, a place almost forgotten.

There he can see Polish collaborators and German soldiers deploying to the ghetto’s gates and even its boundaries, preventing escape as gray trucks pull in and gray soldiers pour out.

Martin wakes his parents and sister, and the family races to their hiding place, to the two small tunnels dug beneath floorboards in a lumberyard the family once owned.

As they flee, Martin’s family sees a line of Germans making their sweep. Martin knows they will never make it to the lumberyard, so instead they turn toward the courtyard where people have pushed their way into, all looking for escape.

The press of bodies scares Martin’s little sister, Roslyn, who turns back and runs toward death and hell. Her family can do nothing but follow, and catching up to her, Martin’s mother remembers neighbors rumored to have been creating a secret hiding place.

Back to the building, up the stairs, to a door that is padlocked. Martin grabs an ax from the family’s old apartment, and swings it, breaking the lock.

Once inside, however, there is nothing to see. Nothing to hear. Martin’s mother calls out, but the only response she gets is silence. It’s clear compassion will not lead to revelation.

Martin’s mother calls out again, but this time she threatens to start moving furniture and let everyone suffer the consequences.

This time it’s not silence greeting his mother, but instead a voice from beneath a bed. “Climb down under the bed, and through the wall behind. Seal the wall tight.”

The Germans are close, breaking through doors, still shouting, “Juden! Raus!” The make it to the neighbor’s apartment, and seeing the smashed padlock, they can only assume some of their own have already searched the apartment.

So there is no search. They don’t even come into the apartment. And for four days, the two families share meager food rations, and use a single pail as a toilet.

Martin Spett, who shined the light of truth on the Holocaust, dies at 90