Just passing through, but making sure we never forget

Come Veterans Day, a POW/MIA flag will fly thanks to Irving Liebowitz 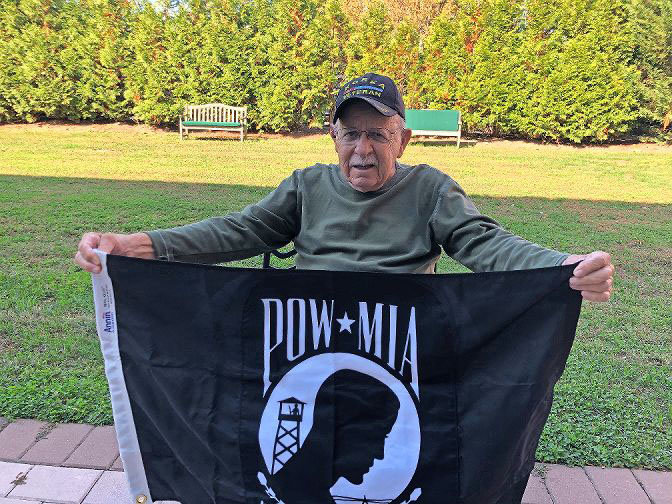 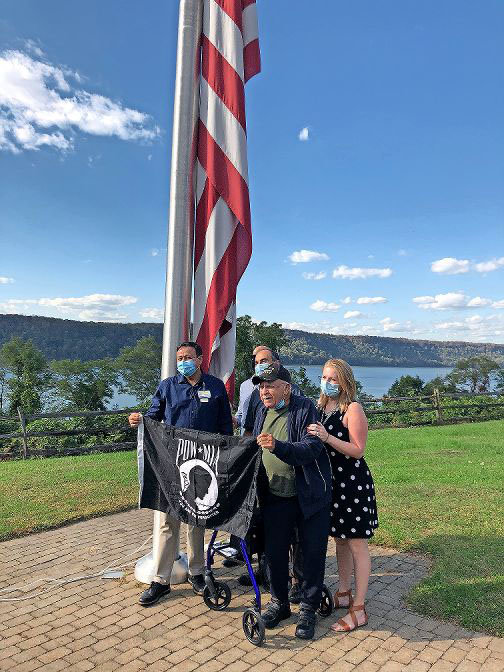 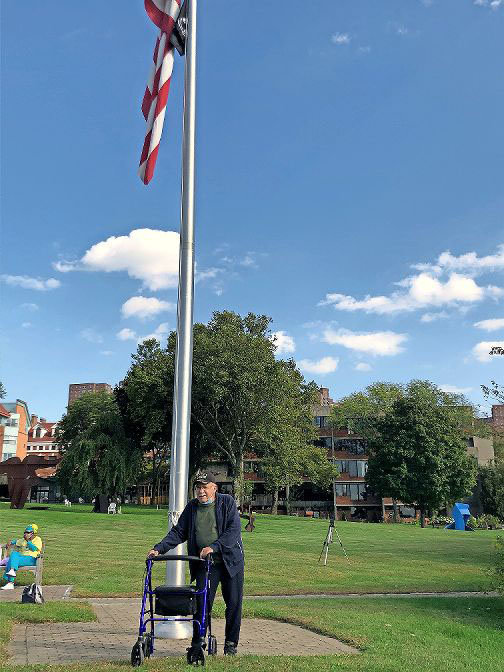 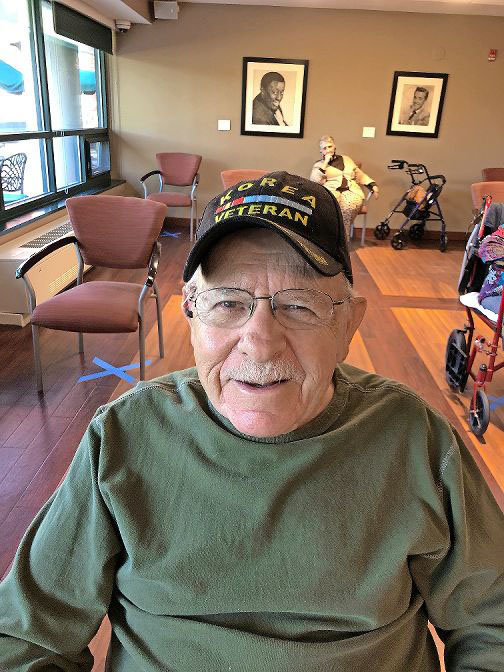 Irving Liebowitz supported troops fighting in the Korean War at a quartermaster station in France, but never forgot the sacrifice so many other soldiers made during that conflict. Although his stay at the Hebrew Home at Riverdale is only temporary, he won’t leave until he has a chance to raise a POW/MIA flag above the Palisade Avenue campus on Veterans Day..
Courtesy of the Hebrew Home at Riverdale
Previous Next

When people think of war, they think of the infantry men on the front lines. But for every infantry man, there are 17 supporting soldiers that are needed to do other jobs.”
Irving Liebowitz
By MICHAEL HINMAN

Irving Liebowitz isn’t exactly fond of change. In fact, the few times he’s endured it was only because life gave him little other choice.

He’s lived the last 58 years in the Long Island hamlet of Merrick, raising his three children, and creating what he hoped was the perfect home for his wife, Claire.

But kids grow up, friends and family grow older, and sometimes life deals the most difficult moments, like Claire’s passing more than a decade ago from breast cancer. Irving has found a way to persevere. Yet, like for many, 2020 has presented its own challenges.

First, the 90-year-old Irving found himself taking up temporary residence inside the Hebrew Home of Riverdale’s RiverWalk community while recovering from a broken hip. And then the coronavirus invaded, cutting off residents from their regular routines, and preventing them from spending time with family members and friends.

“For three months, we were like prisoners,” Irving said. “We had everything we needed in our apartments, but we couldn’t leave. There were all these precautions beginning in March because no one was quite sure what to do. So the safest thing we could do was stay inside.”

But as the world learned how to better battle COVID-19, and the air outside warmed, it became safer for Irving and other residents to at least venture outside. Yet it wasn’t majestic views of the Hudson River or the Palisades that had Irving’s attention. Instead, it was the flagpole where America’s stars and stripes proudly waved high in the sky over the Hebrew Home. Having served his country during the Korean War in the early 1950s, this was a sight he certainly needed after months of being cooped up inside.

Only there was something missing. And Irving felt it was his mission to ensure that by the time he returned to Merrick, the Hebrew Home would be flying a POW/MIA flag.

“I’m pretty active with the Jewish War Veterans post on Long Island, and I think of veterans — and the respect that all of us Americans have had for veterans,” Irving said. “If someone in a family served, and never came home, there should be something to honor them.”

The POW/MIA flag was designed in the early 1970s by the National League of Families of American Prisoners and Missing in Southeast Asia. While the idea to create the flag was a result of the Vietnam War, which was raging at the time, it’s a flag that virtually covers all conflicts — including the Korean War, where more than 7,800 American soldiers still remain unaccounted for, according to the Defense POW/MIA Accounting Agency.

“We, as Americans, don’t have the patriotic feelings that we used to have years ago,” Irving said. “I was not in the second world war, but I remember what it was like. We loved our country, and that’s just not a feeling that many seem to have anymore. But this flag represents the veterans that didn’t make it back. They should be remembered, and this is a way to remember them.”

Irving was raised near the Bensonhurst neighborhood of Brooklyn, and after graduating from high school in 1948, worked with his father selling floor coverings like linoleum and tile — “but not carpet,” he said. By 1951, he was already engaged to Claire when a letter arrived in the mail.

Irving Liebowitz had been drafted into the U.S. Army.

“I wasn’t surprised,” he said. “The mail was sent to me, it came, and I went. Uncle Sam is calling you, and you have to answer that call.”

Irving was sent to Fort Dix near Trenton, New Jersey, in the middle of summer.

“I was never in hell,” he said, “But Fort Dix is probably a very close number two.”

But Irving never got to ship out with his unit. His commanding officer noticed the young soldier had developed a serious rash, and fearing it might be contagious, sent him to the medical unit. By the time he was cleared to return to duty, Irving’s unit had left him behind for Korea, and he was reassigned. Not to Asia, but instead to Europe.

“I ended up going overseas to France to serve in a supporting unit for NATO countries,” Irving said. “When people think of war, they think of the infantry men on the front lines. But for every infantry man, there are 17 supporting soldiers that are needed to do other jobs, to make sure that infantry man has everything that he needs.”

Irving was responsible for distributing weapons through a quartermaster base, and fortunately didn’t see battle himself.

“I know I should thank God because I don’t think I would have survived at that particular time,” Irving said. “We were sending our troops overseas, and a lot of them never got home.”

Every day, he and Claire would exchange letters. And after two years of service, Irving returned home. They stayed in Brooklyn for a few years as they started their family, but eventually relocated to Merrick, hoping to raise their children in the best environment they could.

Irving worked a series of jobs to support his family while attending school at night, eventually earning a degree in mechanical engineering. This helped him work at many of the defense manufacturers that dominated Long Island in those days. When those manufacturers left the island, Irving decided to go into business himself, selling Snap-on tools to car repair shops and gas stations.

Through all of that, he stayed active in veterans causes, primarily with the Jewish War Veterans post in Merrick. In fact, when Irving needed a POW/MIA flag for the Hebrew Home, the post was the first call he made.

They shipped a flag over right away, and Irving plans to raise it above the Hebrew Home for the first time on Veterans Day, Nov. 11.

Then hopefully, not long after, Irving can get home himself.

Being at the Hebrew Home has allowed him to be close to one of his daughters, who lives in New Rochelle. His oldest daughter lives in Jerusalem, while his son and his wife retired to Arizona.

They have expanded the family with grandchildren, and just two months ago, Irving welcomed his first great-grandson, Cole.

“I’m ready to go home,” Irving said. “It’s not that I’m not happy to be here. It’s a beautiful place. But there’s nowhere like home.”