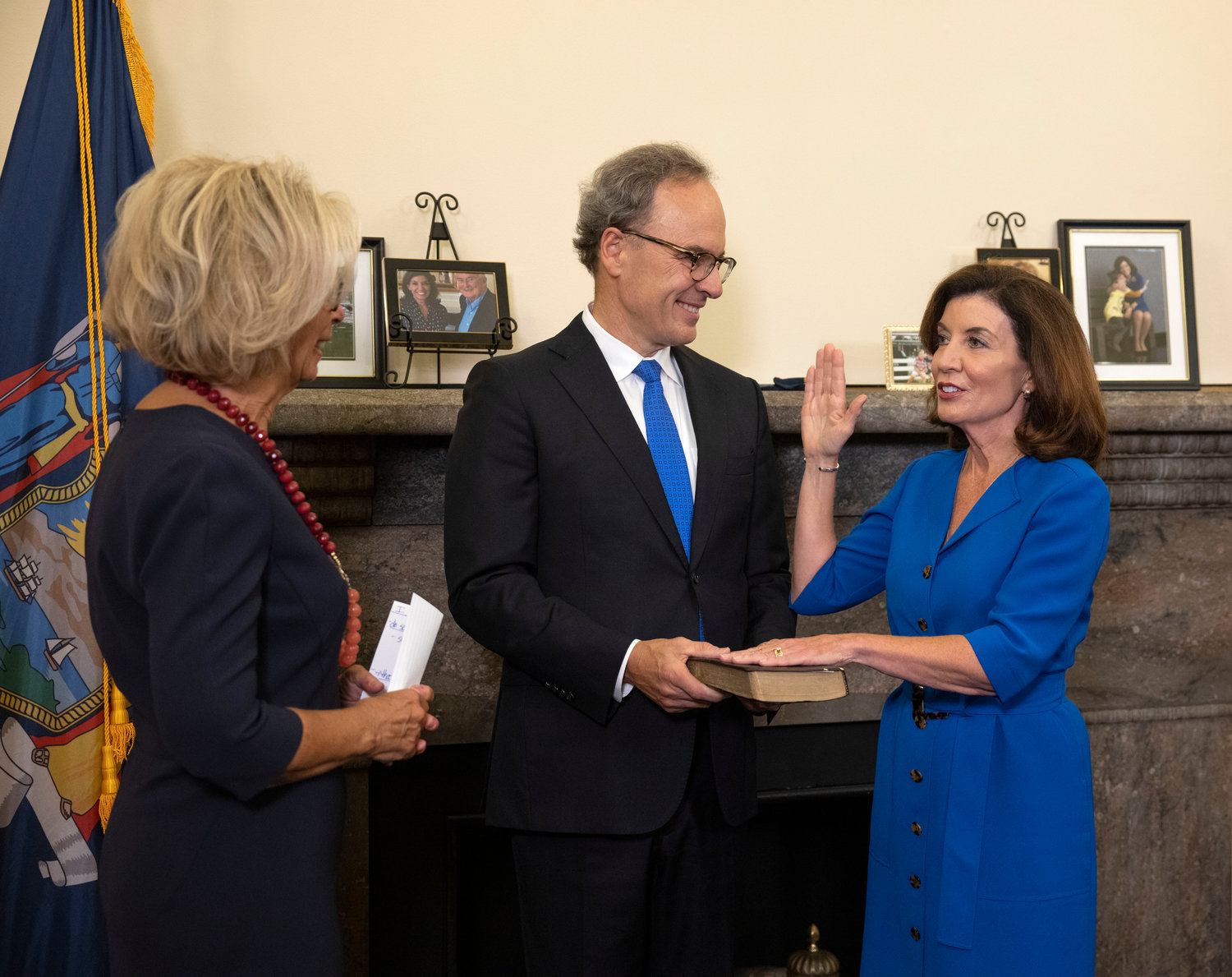 Kathy Hochul is sworn in as New York's 57th governor by chief judge Janet DiFiore while husband Bill Hochul holds the Bible. She will fill out the remainder of Andrew Cuomo's third term, who announced his resignation two weeks ago after a sexual harassment scandal rocked his office.
Courtesy of Gov. Kathy Hochul/Mike Groll
By MICHAEL HINMAN

Just after midnight Tuesday, Kathy Hochul — who started her political career on the town board of a Buffalo suburb nearly 30 years ago — made history. She was sworn in as New York's 57th governor — and the state's first woman executive, succeeding Andrew Cuomo, whose decade-long leadership ended in scandal.

The ceremony was small, with husband Bill Hochul holding the Bible and chief judge Janet DiFiore administering the oath of office. Kathy Hochul will repeat all of that again later Tuesday morning for a ceremonial swearing in, which also is expected to include the new governor's first public remarks.

In the meantime, she shared a simple gratitude through social media: "Honored to be officially sworn in as New York's 57th governor," Hochul wrote.

While the transition at the governor's mansion might take a little bit of time, Hochul's team wasted none of it scrubbing Cuomo from much of the office's official website, including pulling down video and a rush transcript of the former governor's farewell speech that had been included in the "pressroom" section before midnight.

If Cuomo had any remorse over the sexual harassment claims against him, he didn't show it in his pre-recorded speech released Monday, calling state attorney general Letitia James' bombshell report documenting the claims from nearly a dozen women as a "political firecracker."

"I understand that there are moments of intense political pressure and media frenzy that caused a rush to judgment, but that is not right," Cuomo said. "It is not fair or sustainable.  Facts still matter. A firecracker can start a stampede, but at one point, everyone looks around and says, 'Why are we running?' The truth is ultimately always revealed."

The former governor was adamant that "the truth" about the accusations against him "will out in time."

Appearing later on MSNBC, de Blasio told host Aaron Gilchrist that Hochul had already set a new tone before even taking over the state, while seemingly landing his own punches at Cuomo's expense.

"She's a grounded human being who wants to communicate, who wants to work together," the mayor said, according to a transcript released by his office. "It's not this whole painful history we had of everything was a political machination or backstabbing. It's a breath of fresh air. I'm really looking forward to (Tuesday) when I'll be working with a governor who just wants to work together. And I really believe that's who she is."

Hochul was elected to Hamburg's town board in 1994, and remained there well into the early 2000s until she became the Erie County clerk. Just a few years later, Hochul was elected to Congress in a 2011 special election that made her the first Democrat to represent that region in the U.S. House since the 1970s.

But Hochul's time in Congress was short thanks to redistricting that eliminated her seat and sent her back to New York.

At about the same time, Cuomo was seeking re-election, but his then-lieutenant — former Rochester mayor Robert Duffy — decided not to return to Albany with Cuomo. Instead, Cuomo asked Hochul to join him on the ticket, winning re-election in 2014.

Hochul is known to have rather diverse political views, including what some say might be more centrist — and even right-leaning. As a congresswoman, she spoke out against Gov. Eliot Spitzer's work to provide undocumented immigrants with driver licenses. She also was one of just a few Democrats to earn an endorsement from the National Rifle Association.

Hochul will serve out the remainder of Cuomo's term through the end of 2022, and will be eligible to seek re-election then. She is seeking someone to replace her as lieutenant governor — a position she'll be able to appoint without confirmation by the legislature, thanks to a court victory by then-Gov. David Paterson in 2009 establishing that appointment as a power of the governor.

One name that has been bounced around a bit, according to some reports, is state Sen. Alessandra Biaggi — a longtime critic of Cuomo who had called for the governor's resignation or impeachment even ahead of the attorney general's final report.

Hochul has not set up a timetable on when she will announce her pick. But, in the meantime, state senate majority leader Andrea Stewart-Cousins remains next in line for the top spot.