Keeping alive a dream for the street’s best 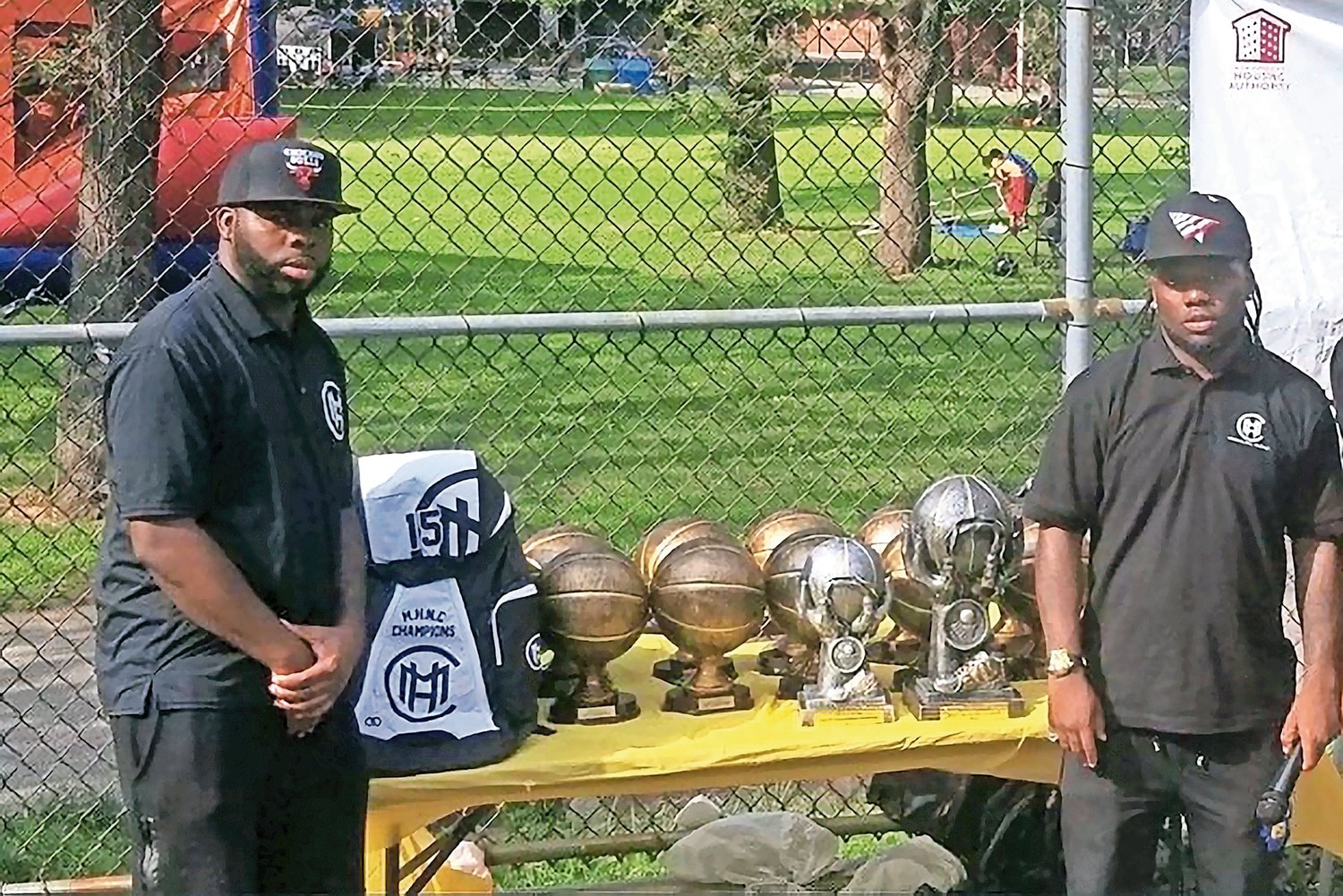 Norman Green, left, and his younger brother Isaiah, right, are co-organizers of the Marble Hill New Era Classic. The brothers assumed head duties in 2015 after the tournament took a two-year hiatus. Now, they are back and better than ever serving their community through the game of basketball.
Courtesy of Isaiah Green 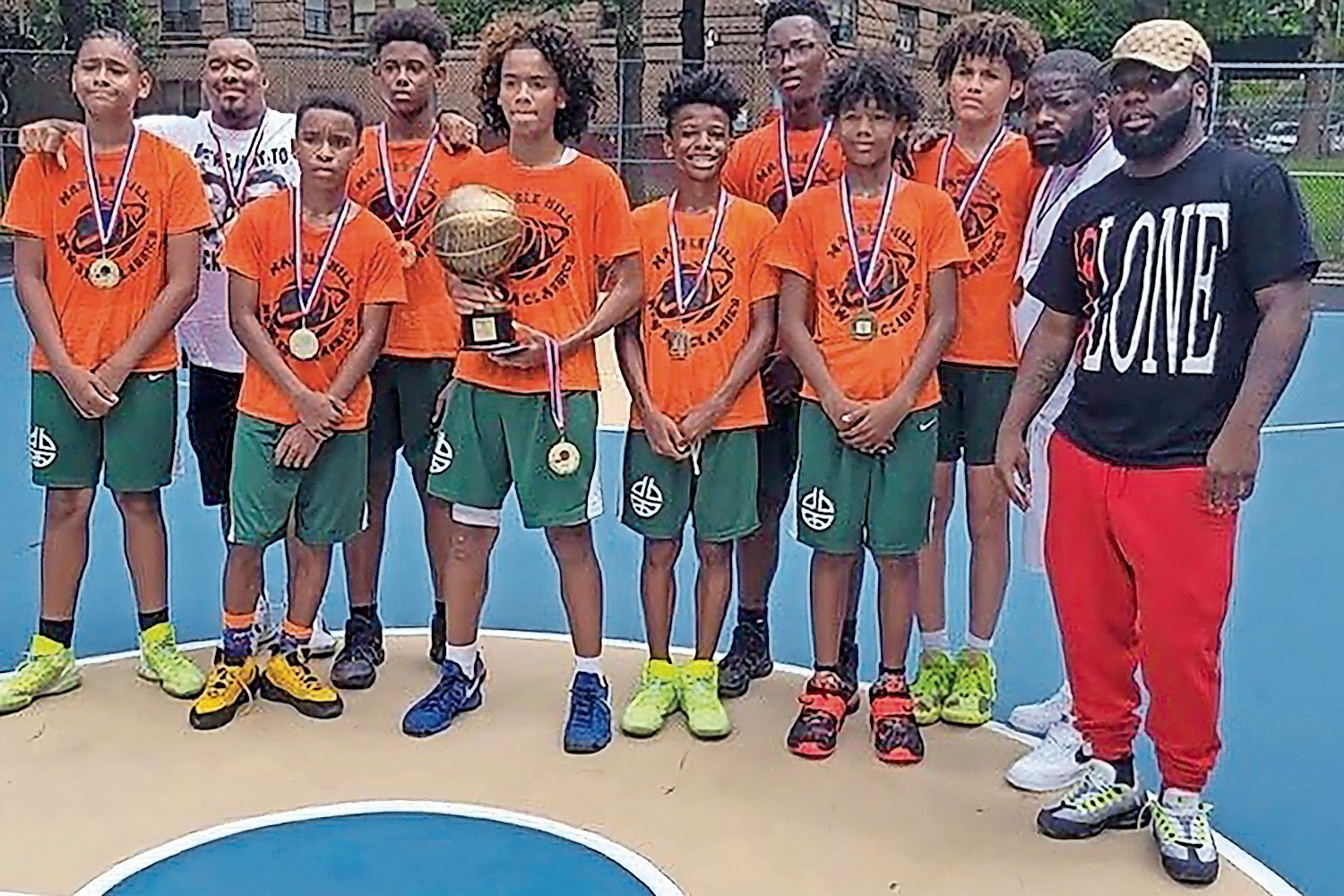 The Castle Athletics took the Under-13 Championship at the Marble Hill New Era Classic in 2021. The games are back up and running this summer and will conclude on Aug. 20 with the championship round.
Courtesy Isaiah Green
Previous Next
By Pete Janny

Summer in New York City offers plenty on the sporting front. Baseball fans flock to the two Major League Baseball ballparks – or whichever Little League diamond their child is playing. Basketball fans, however, behold the spectacle of street ball in the city this time of year. And two brothers in the Bronx are keeping that tradition alive.

At first, the games were simply a fun way for the two brothers to bring together residents they grew up with. By year three, their passion project had evolved into something much bigger, with four separate divisions of play. Then teams started coming from Westchester and Long Island, as well as neighboring states, to round out the under-13, middle school, high school and men’s divisions.

“It started as an in-house situation making teams based on the neighborhood buildings,” Norman said. “Now every year we try to do something different to expand our tournament.”

The history of organized streetball in Marble Hill goes back further, too. Before the Green brothers revived the tournament in 2015, local resident Christopher Riley was the head organizer of the competition. Riley coached Isaiah growing up on his teams that played at Dyckman, which speaks to why the coach and his former point guard were on the same page for this reclamation project.

“He came to me when he first thought about bringing the tournament back and I respect him for that,” Riley said of Isaiah.

The Green brothers helped fill what Riley describes as “gaps” in the long history of Marble Hill basketball. Riley graduated from St. Nicholas of Tolentine High School at the same time Dyckman Basketball was gaining notoriety in the early 1990s. Despite not carrying the same name recognition as Dyckman, Marble Hill attracts a lot of the same players and teams, according to Riley.

“Once I stopped doing the tournament there was maybe a gap… and then Isaiah and Norman took over and they have been doing a phenomenal job,” Riley said. “But it just takes time to build up to something.”

The reboot of the program has gone beyond to include more opportunities for the youth — a top priority for the Green brothers. Even now as more of a distant observer, Riley has noticed a newfound creativity—such as skills training and conditioning workouts—which serves to enhance the quality of the tournament games.

“Norm and Isaiah deserve all the credit for what’s been going on the last several years in terms of Marble Hill Basketball,” Riley said. “From the uniforms with how good they look and the logo and everything.”

But to get to this point, they have had to overcome everything from repainting the court to lobbying for access to one. Now they have settled on two courts, with newly installed glass backboards and a soon-to-be new scoreboard.

“Two weeks ago, the rim broke,” Riley said. “Now in my era, if the rim broke we would probably be shut down for the summer, but they had the tournament running the next day.”

This atmosphere is conducive for NBA players to come play — or in the case of Knicks forward Obi Toppin, provide a springboard to their streetball fame.

“It’s just the fact of the family environment and the element that we bring, some of them (NBA players) actually come,” Isaiah said.

The Green brothers call Marble Hill home, with their earliest memories taking place on the basketball court. That sense of loyalty has reinforced their commitment to helping local kids develop both on and off the court — even if it means going the extra mile to help someone get into college.

“We’re well connected in the street ball industry,” Norman says. “So we helped multiple kids get into prep schools, junior colleges and some through colleges.”

This is only the beginning though for the Green brothers. They have a few other items they would like to check off in order to become even more of a household name in the community.

And in one week’s time, the Junior Knicks Summer Basketball Camp will arrive to do a clinic with young players from Marble Hill Houses. For these players, as it is for anyone who plays a role in the program, it’s about confidence-building and self-growth.

“If you’re not actually up to speed to play in the tournament, we have the Junior Knicks program that’s developing them as well,” Isaiah says.

Everyone has a different role to play. Besides playing, there are opportunities for coaching, officiating and gaining sports management. The Green brothers share in the responsibility of organizing and promoting the budding playground tournament.

The Marble Hill New Era Classic is in good hands under the Green brothers, Riley says. They have set out on this mission together. This year it will conclude on Aug. 20.

“They look at it as a challenge that they can get through and keep going,” Riley says. “It is great for the community as a whole.”