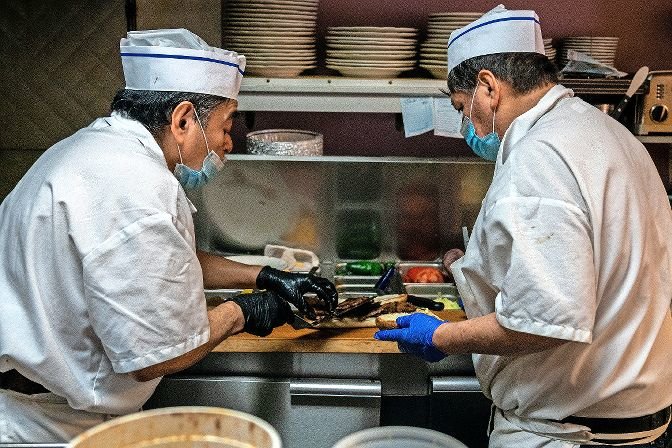 Fernando and Abraham Rodríguez have 40 years of restaurant experience between them, but the two are facing significant hardship as their business, the Kingsbridge Donut Shop, struggles to adapt to a reality shaped by the coronavirus pandemic. With fewer customers and no government relief, Fernando said things are looking grim for the shop.
HIRAM ALEJANDRO DURAN 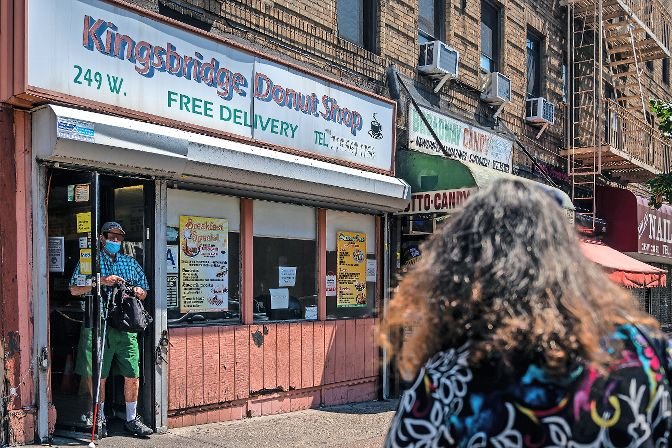 Just one business hit hard by the coronavirus pandemic, the Kingsbridge Donut Shop is struggling to adjust to outdoor seating, and takeout and delivery orders. Their outside seating area is small, owner Fernando Rodríguez says, and they don’t have the funds to purchase umbrellas or build a patio to make it more comfortable.
HIRAM ALEJANDRO DURAN 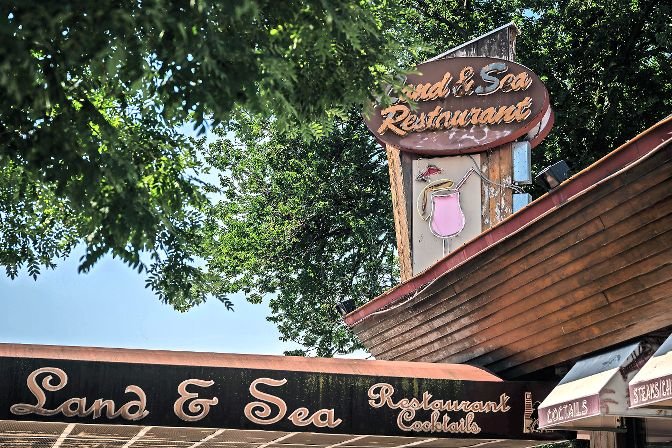 Land & Sea, a staple in Kingsbridge for decades, closed abruptly last month amid the coronavirus pandemic. Restaurants are struggling while fulfilling takeout and delivery orders and constructing outdoor seating areas, and low revenues have forced dozens of bars and restaurants across the city to close their doors forever.
HIRAM ALEJANDRO DURAN 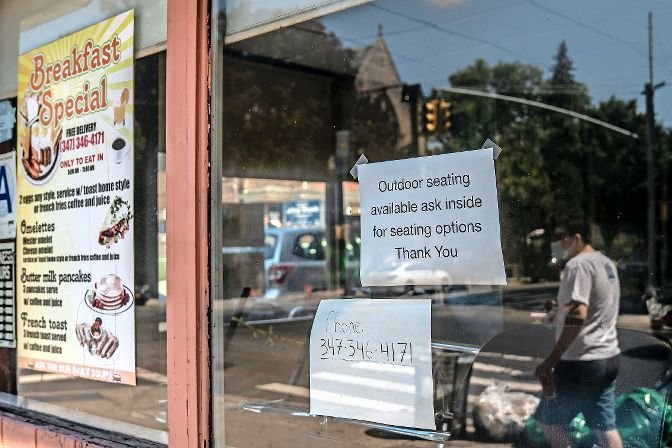 A sign at the Kingsbridge Donut Shop directs customers to outdoor seating if they want to stay at the restaurant with their food. The shop is struggling to stay afloat while serving mostly takeout and delivery orders, as many of their customers love to sit inside to catch up with friends and neighbors.
HIRAM ALEJANDRO DURAN 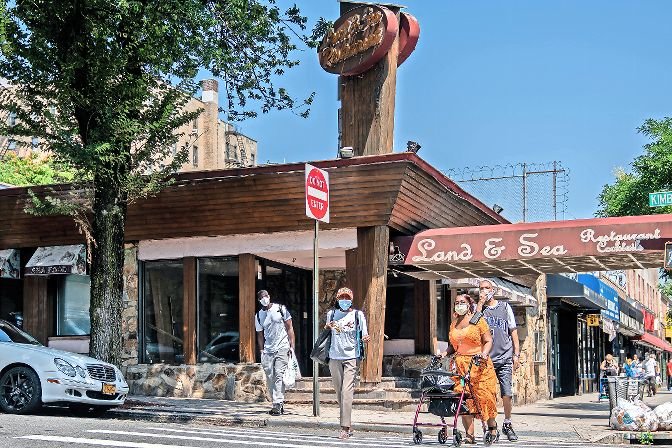 Land & Sea restaurant, a staple in Kingsbridge, was a recent casualty of the coronavirus pandemic. While restaurants are now able to open their doors for takeout and delivery orders and outdoor dining, revenue has slowed down significantly, driving some, like Land & Sea, to close permanently.
HIRAM ALEJANDRO DURAN
Previous Next
By KIRSTYN BRENDLEN

Few remember what the corner of Broadway and Kimberly Place was like before Land & Sea arrived.

For many, the diner-style restaurant was the best place to find mini crab cakes, its seasonal grilled swordfish, or just a classic burger.

Even in some of the city’s most difficult times, Land & Sea opened its doors. But in the wake of the coronavirus pandemic, those doors will open no more.

Without much warning, Land & Sea shut down for good last month at its 5535 Broadway location, the loss in revenue while New York was shut down just too much for the restaurant to bear.

The restaurant’s owner didn’t return requests for comment, but Kingsbridge Business Improvement District assistant manager Jennifer Sproull said the owner was in a unique position: Not only did he own the restaurant, but he also owns the property. He decided to cut his losses with the restaurant, and try renting out the space for something different.

Closing locations has become more and more of a common refrain throughout not just the Kingsbridge BID, but across the city, even though many stores and restaurants have been allowed to reopen in some shape or form for weeks.

Since New York City entered Phase IV of Gov. Andrew Cuomo’s economic reopening plan in late July, many retailers have returned in some capacity, often with shortened hours, social distancing guidelines, and perhaps fewer employees than they had before the pandemic.

One of New York’s most-beloved and hardest-hit industries have been restaurants. Forced to shutter along with everything else, many have tried to keep up with takeout and delivery orders, often taking in just a fraction of their normal revenue. Still, hundreds of bars and restaurants have closed since March, according to published reports, with Land & Sea almost finding itself not much more than an economically depressing statistic.

Land & Sea could return in another location once things settle down, Sproull said. But for now, the iconic restaurant will remain closed.

Sproull has assembled a list of vacant spaces in Kingsbridge in part because many are looking to downsize as they struggle with commercial rent in their current locations.

“Their facilities will still stay in the same neighborhood, they just can’t swing it anymore in the location they’re in,” Sproull said. “Or they might not have the time and everything where they could renegotiate a lease next year for a lower rate.”

Assistance for tenants has been limited, even as calls for eviction moratoriums and rent cancellations grow louder. Help is even more limited for small commercial tenants.

A July survey by the New York City Hospitality Alliance found that of more than 470 restaurants, bars, nightclubs and venues surveyed, 4-in-5 were not been able to pay their full rent in July. Just 17 percent said they expected to pay full rent for the month, while others said they wouldn’t be able to pay at all, or would make a partial payment.

Fernando Rodríguez finds himself in the majority. The owner of the Kingsbridge Donut Shop on Kingsbridge Avenue and West 231st Street, says he can’t pay rent. There just hasn’t been enough business for the past three months, and because of that, there just isn’t enough money to cover rent.

So far, Rodriguez said, the landlord hasn’t said anything about the missed payments — which is both a blessing and a curse.

“It’s a double-edged sword, because tomorrow comes, and he could say, ‘Oh, you’re behind two months, I could close you down,’” Rodríguez said. “‘No excuses.’”

The small shop typically relies on customers who will come in and sit down, many of them taking their time over their coffee and meals.

“I had this lady who comes almost every day,” Rodríguez said. “She used to eat a BLT, and now she does take home the coffee. She wanted to dine in and relax and watch the people around her. Other people she knows would sit down and have a chat with each other, you know.”

Customers have asked Rodríguez when he’ll make seats available again, but he just doesn’t have an answer. And for Rodríguez, opening indoors is just about the only thing he can think of that will make things better.

When Mayor Bill de Blasio indefinitely delayed reopening indoor dining in early July, citing spikes in infections in other cities, outdoor seating areas sprang up around the city as new permits were issued for sidewalk space. Barricaded outdoor eating spaces on sidewalks, on streets, and even in bike lanes and on-street parking spots, have become standard-issue, and Sproull notes several Kingsbridge businesses have set up in parking lots without even getting a permit from the city.

For Rodríguez, though, outdoor dining isn’t cutting it. The sidewalk space outside the café is limited and he doesn’t have the money to buy umbrellas to shield his customers from the summer weather elements. Instead, customers only have the shade from the building to keep them cool. When it rains, the whole operation is off.

Kingsbridge Donut did apply for a loan, Rodríguez said, but they weren’t able to produce their lease — which was locked inside their lawyer’s closed office — in time.

“We’re losing business daily,” Rodríguez said. “Numbers aren’t going that well. I did lay off two workers, unfortunately. But, you know, considering that there are people with families, I’m giving them all three, maybe four days of work. Me, myself, I’m only working four, sometimes five days a week. It’s not really looking good.”