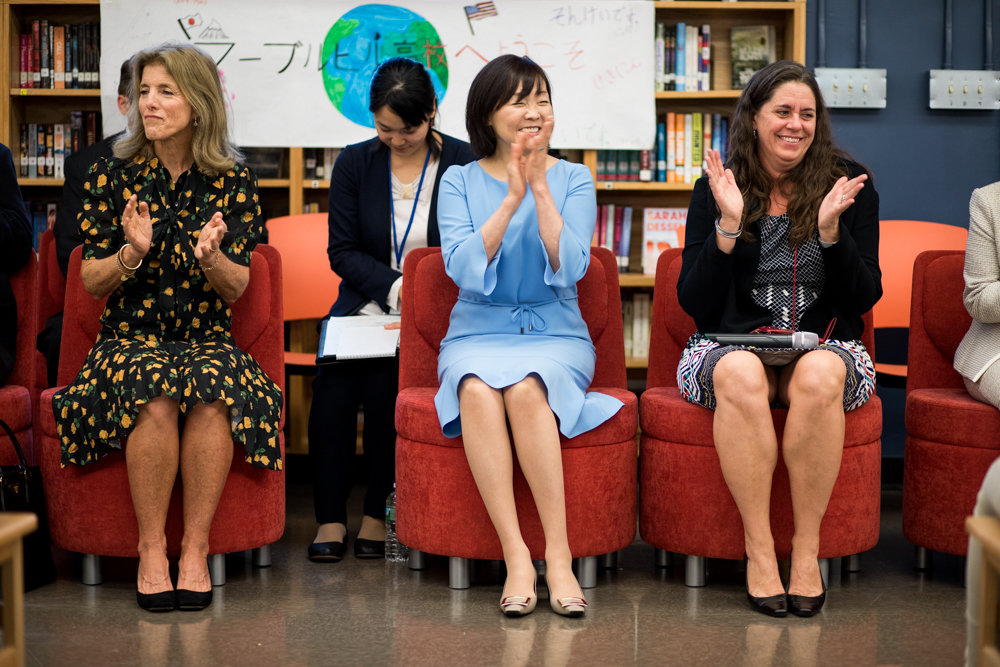 Japanese first lady Akie Abe, center, claps along with Caroline Kennedy, left, and Kirsten Larson, the principal of the Marble Hill School for International Studies, which has a robust Japanese language program and a cultural exchange program with Japan.
JULIUS CONSTANTINE MOTAL 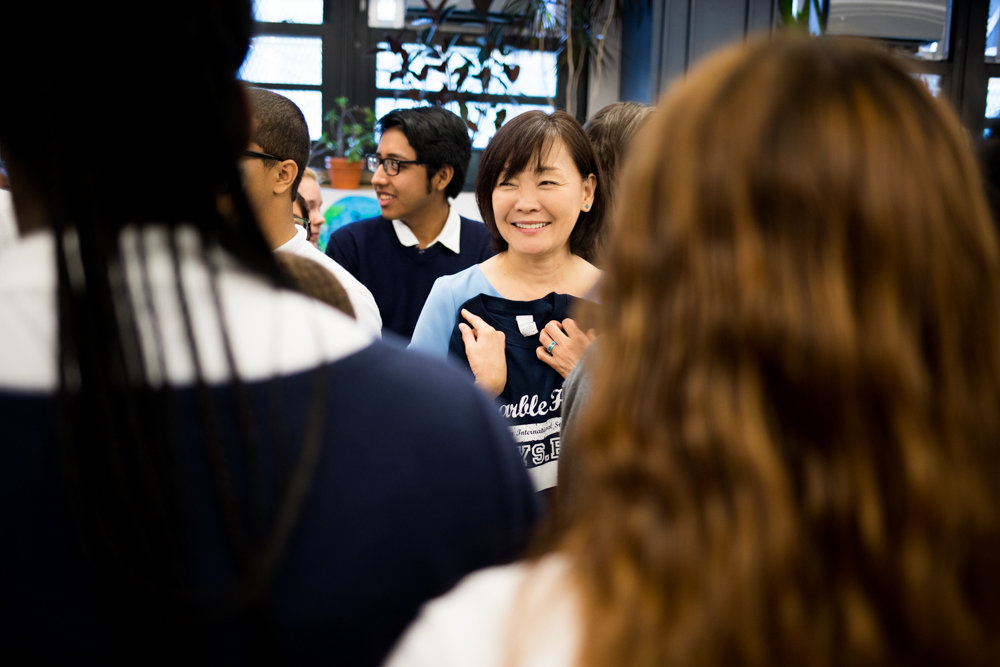 Akie Abe, the first lady of Japan, holds a gym shirt as students assemble behind her for a group photo at the Marble Hill School for International Studies. Abe visited the school in the company of Caroline Kennedy, the former U.S. ambassador to Japan.
JULIUS CONSTANTINE MOTAL 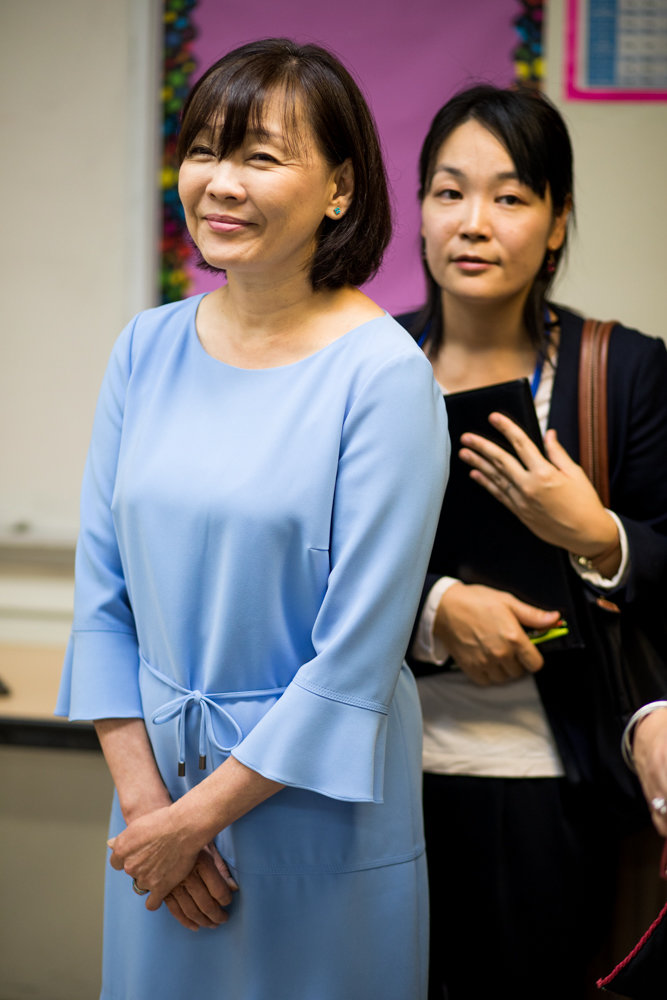 First lady of Japan Akie Abe watches a classroom activity at the Marble Hill School for International Studies. Abe toured the school’s artistic classes and got to interact with students taking Japanese. Kennedy also stopped by the public school to show Abe the DreamYard program, which allows students from Japan to engage in poetry with students from New York City.
JULIUS CONSTANTINE MOTAL 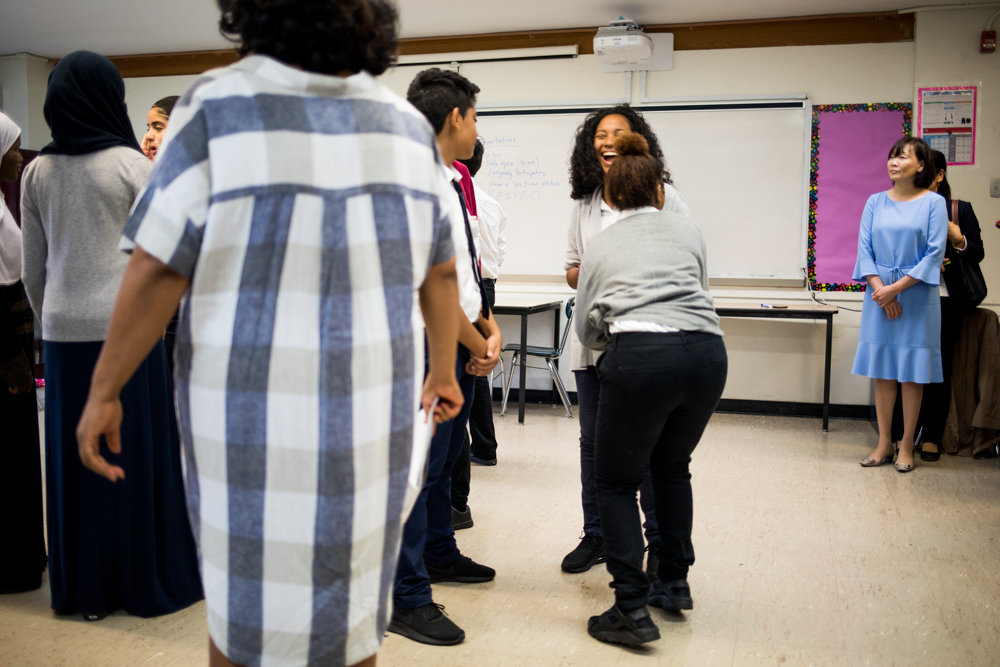 First lady of Japan Akie Abe watches a classroom activity at the Marble Hill School for International Studies. Abe toured the school’s artistic classes and got to interact with students taking Japanese. Kennedy also stopped by the public school to show Abe the DreamYard program, which allows students from Japan to engage in poetry with students from New York City.
JULIUS CONSTANTINE MOTAL
Previous Next
By SIMONE JOHNSON

The United Nations General Assembly was in full swing last week, and it’s not surprising to occasionally see some diplomats and even ambassadors milling about in and around Midtown.

But Akie Abe ventured out of that part of Manhattan last week, making a trip to the Marble Hill School of International Studies at the John F. Kennedy Campus. There, joined by the daughter of the campus’ namesake, Caroline Kennedy, the wife of Japanese prime minister Shinzõ Abe learned more about the school’s poetry program, DreamYard, which not only promotes creativity among the high school students, but uses technology to connect these particular Bronx classes with their counterparts in Japan.

“Mrs. Abe and Ms. Kennedy’s visit validated the value of studying both Japanese and poetry as means to express themselves and learn about other cultures,” principal Kirsten Larson said, adding the school was “energized by this visit.”

Accompanied by security detail and her interpreter, Abe strolled from classroom to classroom, observing various art courses filled with teenagers eager to display their learning. One group of students formed a circle while chanting. Enthused by the rhythm, Kennedy joined in, clapping along with the beat.

Kennedy, a one-time ambassador to Japan, is a long-time supporter of the DreamYard program in Bronx schools, which thrives as part of the Marble Hill school’s extensive Japanese program. Students in the program not only are given the opportunity to learn Japanese and the country’s culture, but can travel to East Asia as well.

Through DreamYard, student poets from Marble Hill have journeyed to Japan, and other countries as well through teleconferences. Using technology, students interact with their counterparts from halfway around the world.

DreamYard started in the Bronx in 1994, and was meant to cultivate creativity through literacy. Today more than 20,000 New York City students participate in the program.

“Our poetry students have learned that regardless of your ethnic background, all teenagers face the same issues,” Larson said, “which makes it easier.”

After hearing the creative works from a number of Marble Hill students, Abe recited her own line.

“There is a beauty in everything that’s different,” she said.

Through her translator, Abe talked with the various DreamYard students not only about their work, but also their feelings toward their craft.

“I’ve become more confident and it’s meaningful to see how people express themselves through culture,” said Kelly Estrella, a junior at the school.

Students also recited poems for Abe, speaking of their experience growing up in immigrant families. They also gave the first lady translated versions of their pieces before they performed. Translations, in fact, are part of the program since it includes students who are not all English-speaking.

One group of students moved beyond poetry and instead performed a dance for Abe inspired by different parts of Africa.

“That was fantastic,” Abe said in Japanese. “Cultural exchange is very important.”

At times, students even showed their skills by communicating with the first lady in Japanese.

Abe left the 99 Terrace View Ave., school with some Marble Hill swag. Even before she left the room, Kennedy had her T-shirt on.

Led and trained by teacher Johanna Yokokawa, the students also sang for their international guest. Yokokawa has been the Japanese teacher at Marble Hill for the past three years, and her commute from Connecticut to work this job, she said, is absolutely worth it.

“It has a lot of meaning for my students because what they’re doing has meaning,” Yokokawa said. “That shows that they care, and it’s worthwhile to have that affirmation.”