More than a dozen employees are rehired at their original hours, pay 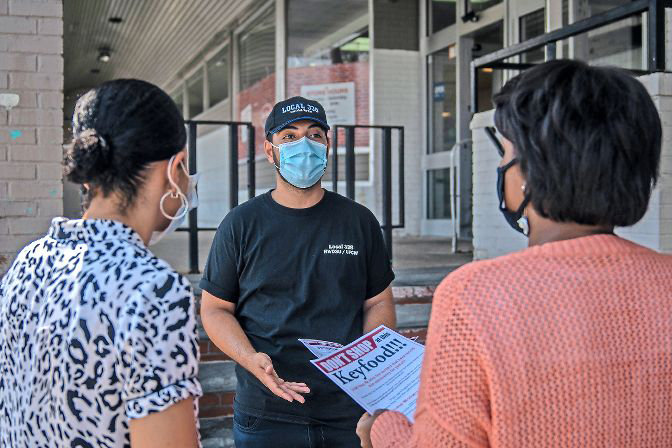 Life is back to normal at North Riverdale’s Key Food grocery store after the location’s new owners settled with a retail store union and the city over the dismissal of protected workers. Back in August, union representatives like Luca Negrino handed out flyers in front of the store protesting the firings.
HIRAM ALEJANDRO DURÁN/ File 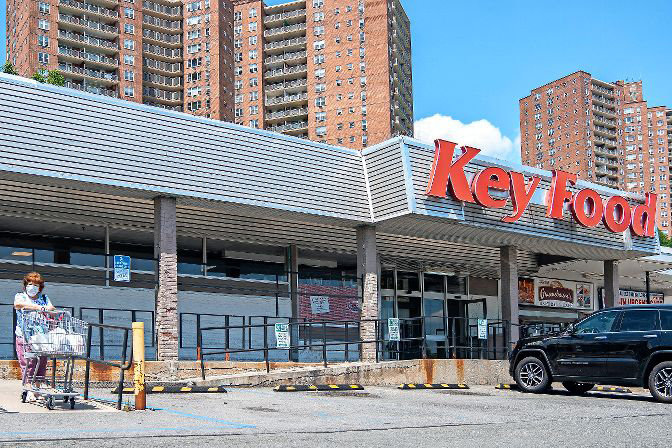 It’s business as usual again at the North Riverdale Key Food after its new owner settled a dispute with a retail store union and the city over the firing of 19 protected workers last summer.
HIRAM ALEJANDRO DURÃN/ File
Previous Next
By MICHAEL HINMAN

Key Food likes to bill its grocery stores as “fresh,” and indeed, it’s a fresh new day for the chain’s North Riverdale location after its franchise owner settled a union dispute with the city’s consumer affairs department, restoring the jobs of more than a dozen employees let go last summer.

NR Shop, the faceless limited liability corporation that bought the location from the Luna family last year, agreed to pay $90,000 in lost wages to 19 workers it fired last summer, and rehire more than a dozen of them.

“We’re glad we could find a resolution that not only put the money back into pockets of essential workers during these difficult times, but also get the jobs back for those who decided to return,” consumer and worker protection department commissioner Lorelei Salas said, in a release. “It was just wrong that the same community heroes who risked their lives to go to work while many of us stayed home were the ones left jobless.”

The payout was significantly less than the more than $200,000 the city originally sought from the store, located inside the Skyview Shopping Center just south of West 259th Street. Salas and the city claimed NR Shop violated the law when it fired the employees soon after changing hands, citing laws that protect union workers in such a sale.

“This law was created to protect grocery store workers from historically volatile employment, and that is more important than ever during these challenging economic times,” Salas said, when the city first sued last July. “These workers deserve better than abruptly being left unemployed in the middle of the pandemic, and we will fight for their rights.”

One of the workers who returned to Key Food was Christopher Casey, who has worked at this particular grocery store location for 35 years. In fact, Christopher’s brother — Craig Casey — told The Riverdale Press the store’s management has given him a much more flexible four-day schedule of five hours each.

“His managers at Key Food have been very kind and accommodating to him,” Craig Casey said.

“As an example, Chris really enjoys going to the movies, so I try and take him once a week. And thanks to his manager giving him a new schedule, that has helped out greatly.”

NR Shop did not respond to a request for comment, but last summer told The Press in a statement that “we’ve been attacked by local politicians and the media, trying to destroy a small, family-run business. Our focus is to build a better shopping experience for the Riverdale community, but it’s been halted by the assault on our ability to conduct business.”

Salas accused NR Shop of violating the Grocery Worker Retention Act, which states a former owner of a grocery store must notify workers about a change in ownership and their employment rights 15 days prior to the sale. After that, the new owner is required to keep all eligible existing employees working at the store for at least 90 days.

The dozen or so workers affected by the ownership change were let go almost immediately, according to representatives with Local 338 of the Retail, Wholesale, Department Store Union. John Durso, the union’s local president, called the settlement a testament to the city’s “vigilance” in enforcing the act and keeping “essential” workers employed in the wake of the coronavirus pandemic.

“What happened to the Local 338 members working at Key Food was entirely unacceptable after they spent months putting their lives on the line to ensure that their community had access to food and the critical supplies they needed during the park months of the pandemic,” Durso said.

Under the new agreement, NR Shop must keep the 13 employees who agreed to return at least 90 days under their original pay and hours. After that, the franchisee is free to keep the workers, or let them go.

Eric Dinowitz, a local educator and candidate for city council, was one of many who stood with the union workers in front of Key Food last summer, telling The Press in a statement he was “thrilled” that a settlement was reached.

“Our workers were able to have dignity and financial security because they have a union and a community that has their back, and protections that give workers the legal tools to stand up to selfish employers,” Dinowitz said. “It was inspiring and encouraging to see my brothers and sisters from the picket line back in the store, and great to see such strong support from the neighborhood.”

Craig Casey couldn’t be more happy for his brother getting back to a store he’s been a part of through many owners, and even several names like A&P, Food Emporium, and even Daitch Shopwell.

“In his own way, he’s a North Riverdale institution,” Casey said. “And our family — 62-year residents at Netherland Gardens — are very proud of him.”