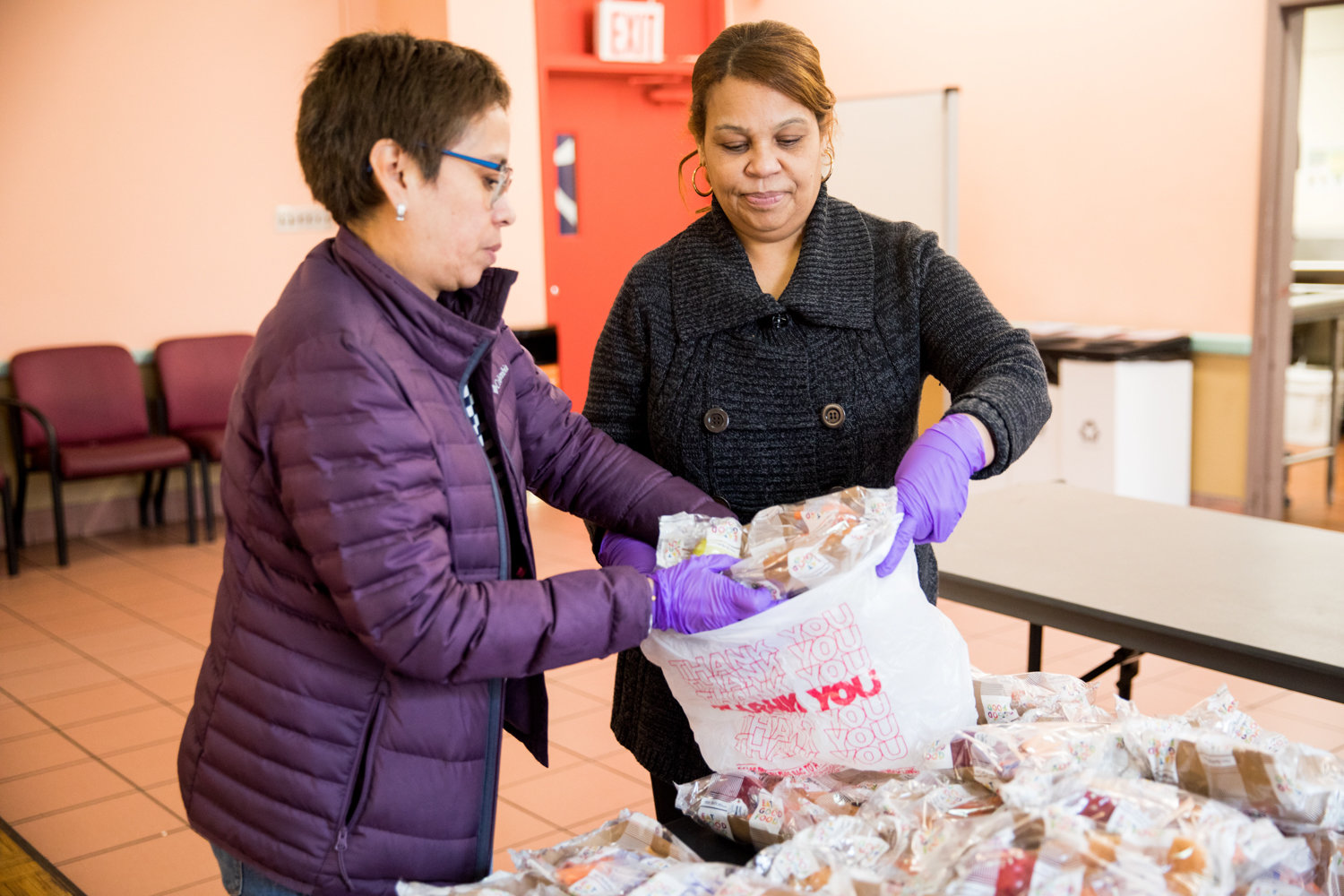 Norma Collado, left, and Carmen Morel pack food for a neighbor at the Kingsbridge Heights Community Center. The organization partnered with celebrity chef Jose Andres’ World Central Kitchen to serve as a food distribution center in the neighborhood. KHCC has moved quickly to adapt its services to meet the needs of the community during the coronavirus pandemic.
JULIUS CONSTANTINE MOTAL 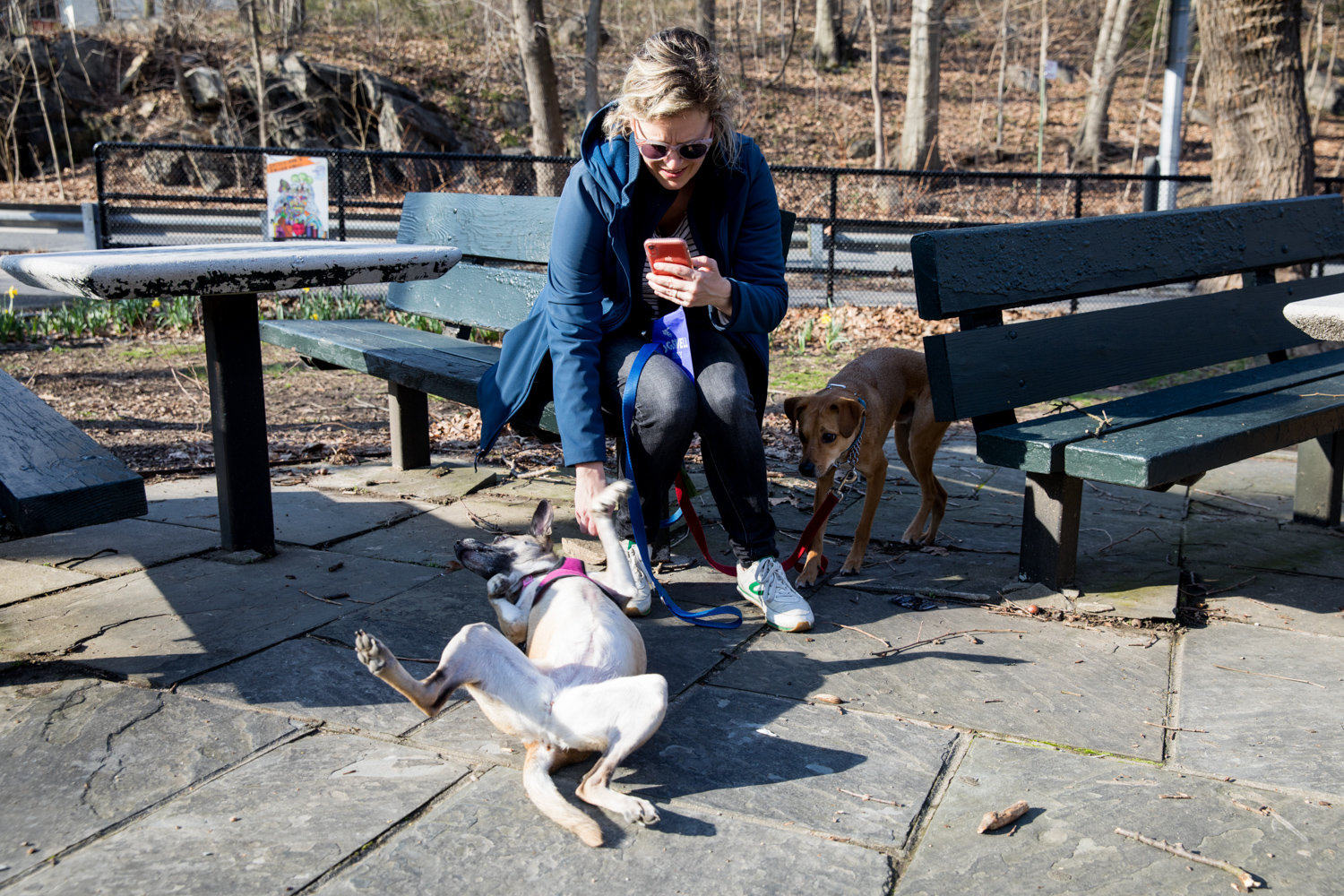 Kingsbridge Heights Community Center executive director Margaret Della gets her 5-year-old dog Lluvia to roll over before giving her a treat. Della live-streamed her walk to several of her colleagues as a way to boost morale after the organization moved to working from home in response to the coronavirus pandemic.
JULIUS CONSTANTINE MOTAL 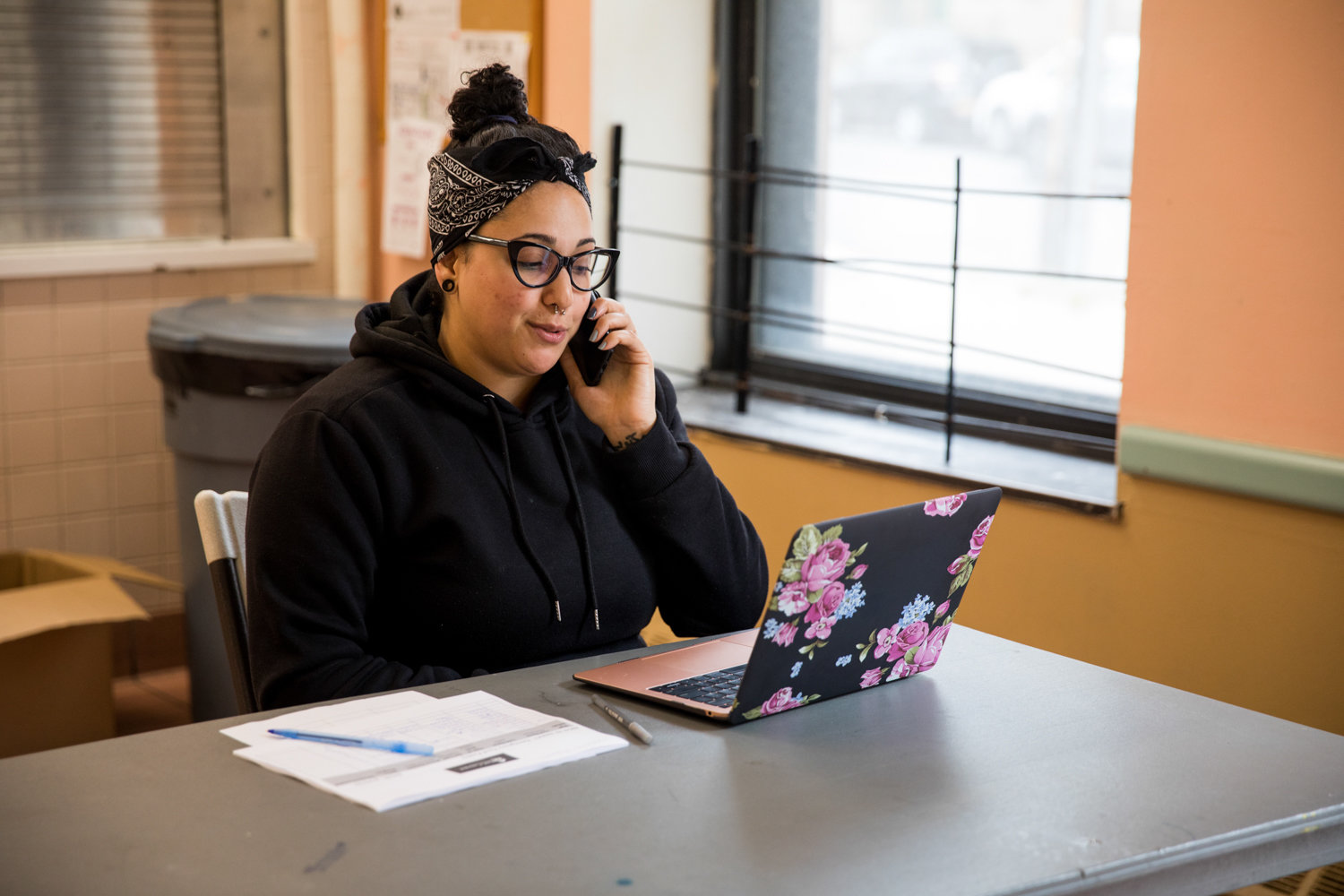 Roz Rodriguez, program coordinator for KHCConnect, calls to check in on a neighbor. Rodriguez was part of a skeleton crew at the Kingsbridge Heights Community Center, which has become a food distribution center in partnership with celebrity chef Jose Andres’ World Central Kitchen in response to the coronavirus pandemic.
JULIUS CONSTANTINE MOTAL 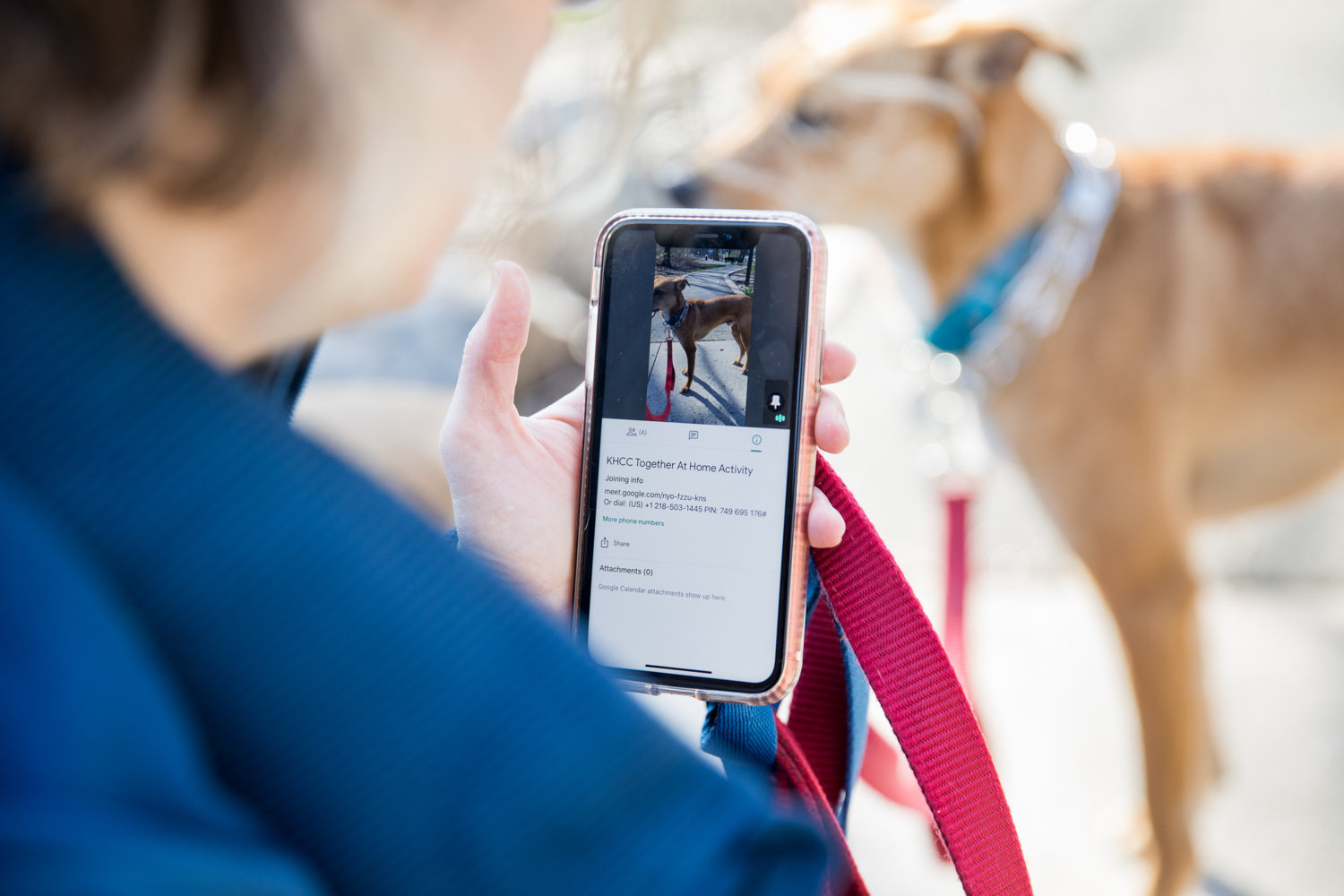 Kingsbridge Heights Community Center executive director Margaret Della live-streams her afternoon dog walk to several of her colleagues as a way to boost morale after the organization moved to working from home in response to the coronavirus pandemic.
JULIUS CONSTANTINE MOTAL 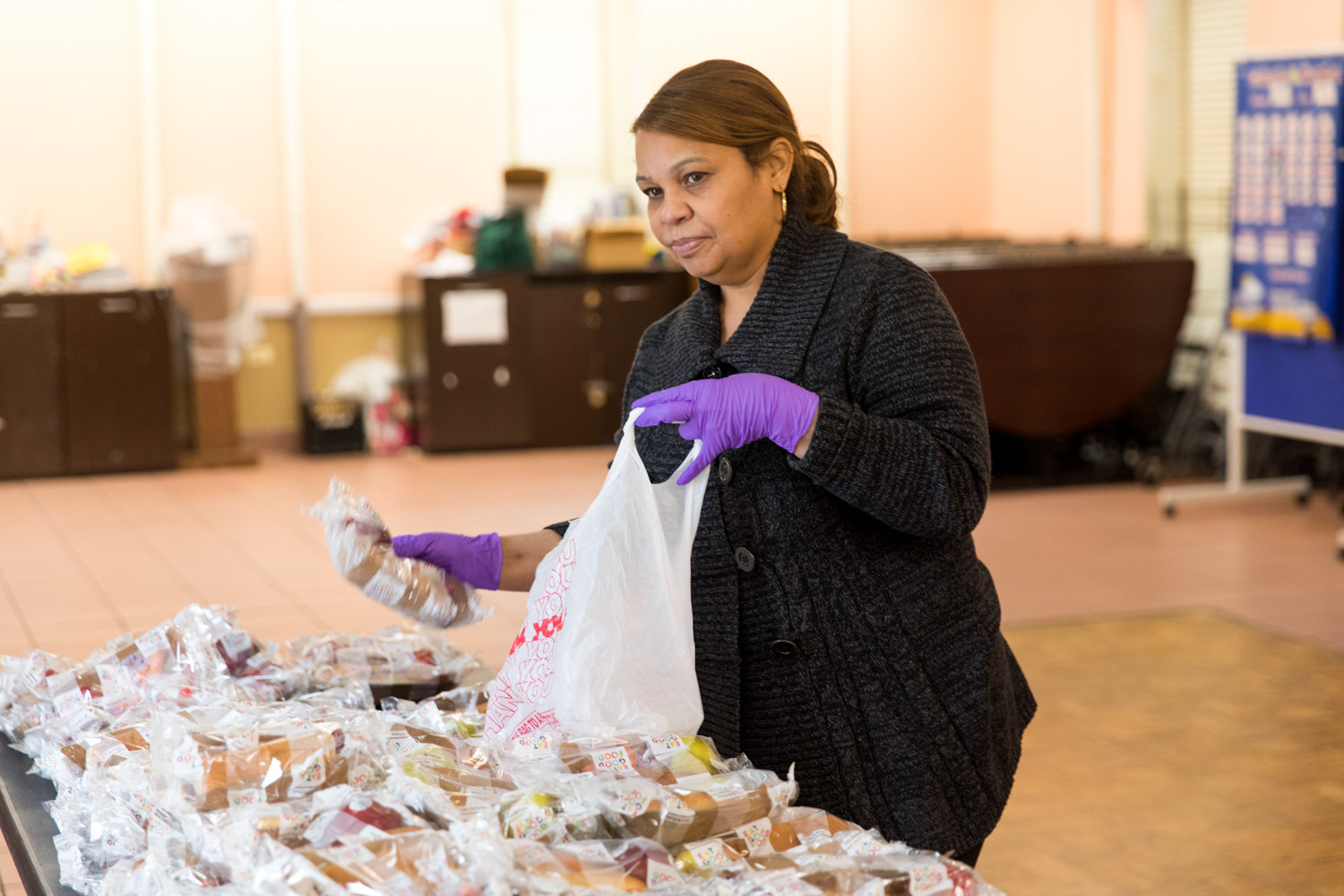 Carmen Morel packs food for a neighbor at the Kingsbridge Heights Community Center. The organization partnered with celebrity chef Jose Andres’ World Central Kitchen to be a food distribution center in the neighborhood. KHCC has moved quickly to adapt its services to meet the needs of the community during the coronavirus pandemic.
JULIUS CONSTANTINE MOTAL 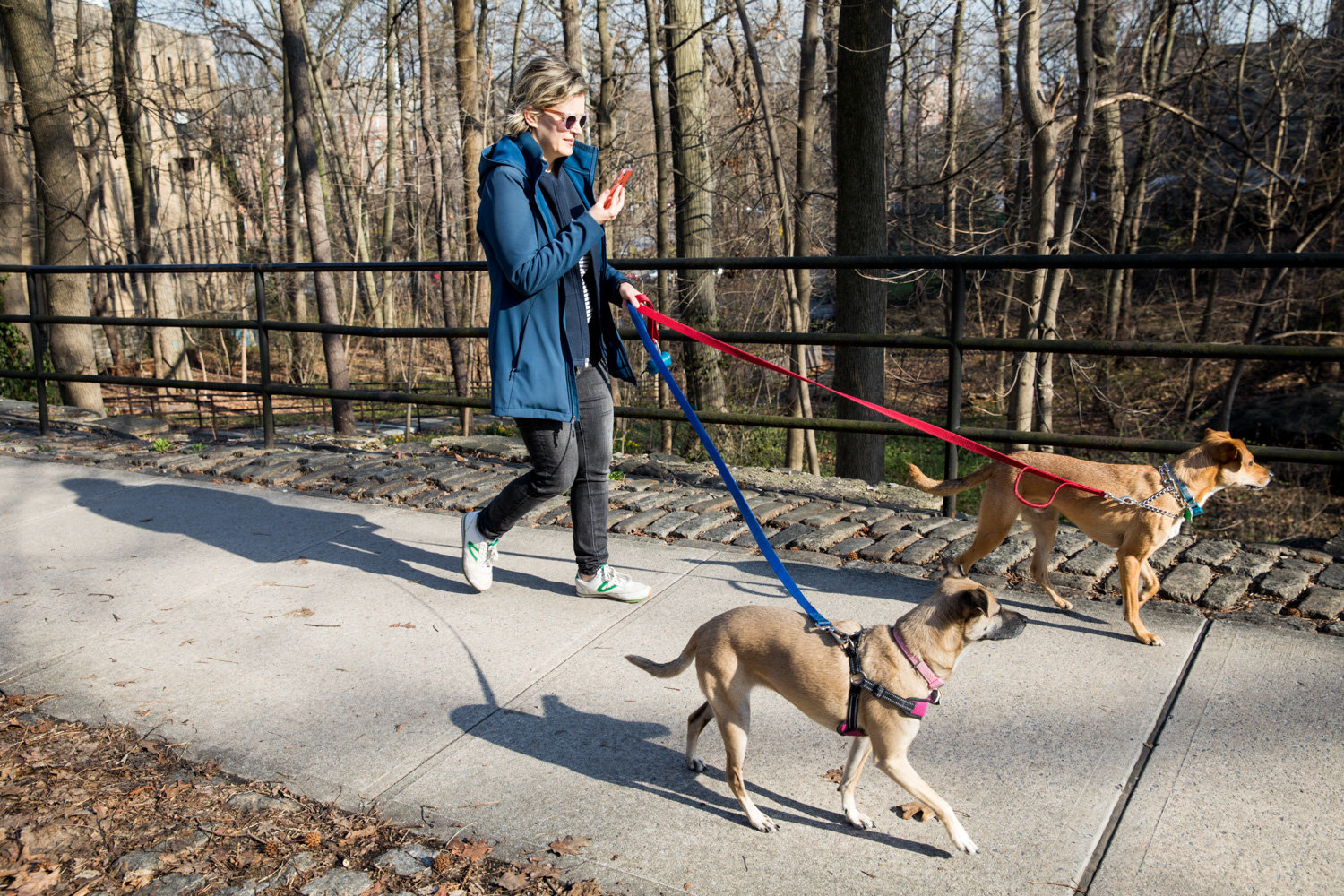 Kingsbridge Heights Community Center executive director Margaret Della walks her dogs along Manhattan College Parkway, which she livestreamed to several of her colleagues as a way to boost morale after the organization moved to working from home in light of the coronavirus pandemic.
JULIUS CONSTANTINE MOTAL 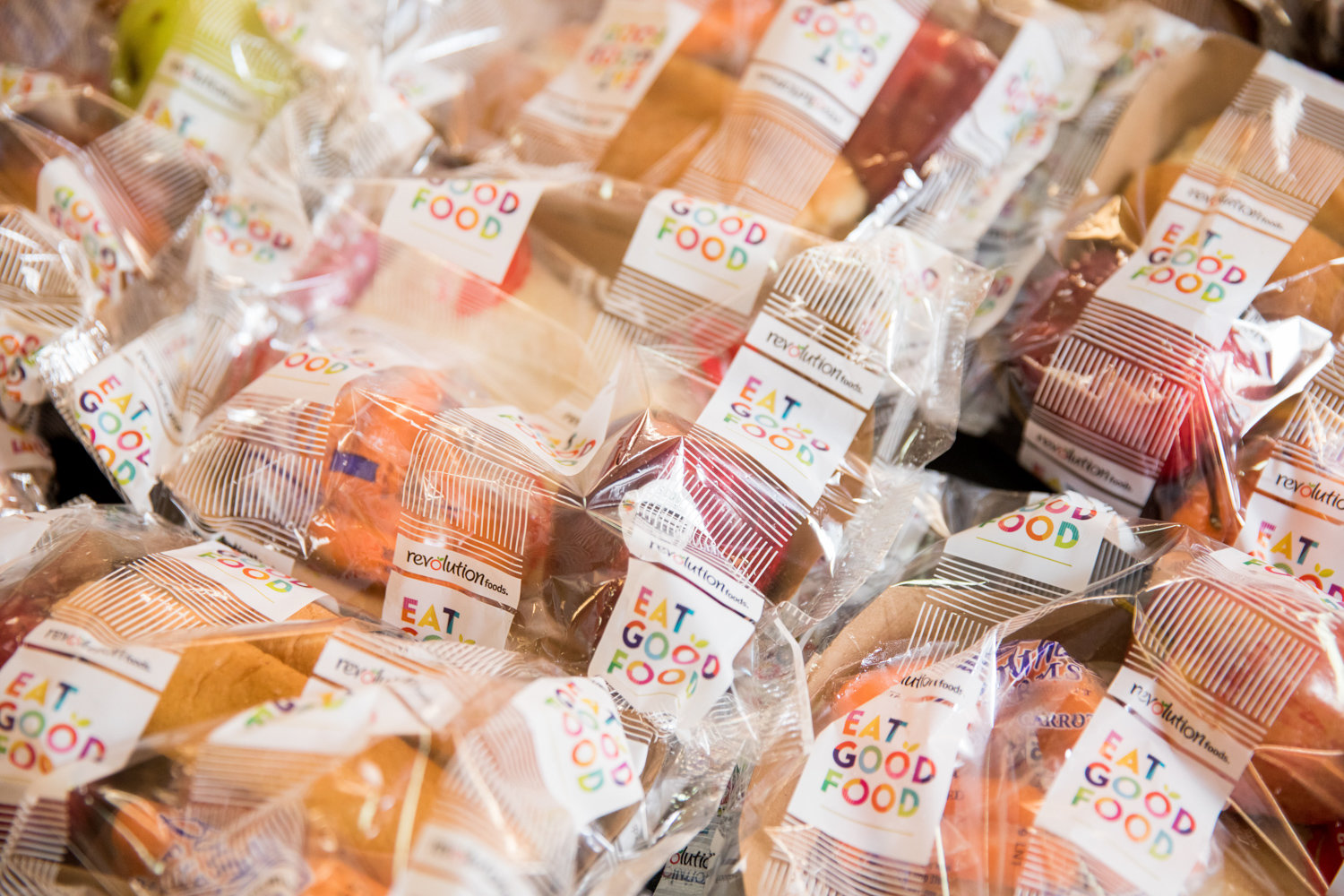 In a life before the coronavirus pandemic, the Kingsbridge Heights Community Center teems with life from young and old and everything in between.

Yet, as the virus that causes COVID-19 tears through the city, it became increasingly clear that things would soon change at the Kingsbridge Terrace center. Soon after Mayor Bill de Blasio announced the public school system was closing until at least April 20, KHCC followed suit, moving quickly to meet the challenge the pandemic posed.

On-site staff was reduced to a skeleton crew, as most of the center shifted to a work-from-home model. And Gov. Andrew Cuomo’s stay home edict meant that KHCC’s halls and rooms would be largely empty.

It is unclear when things will return to normal, but in the interim under the direction of executive director Margaret Della, the center works to meet the needs of the community remotely, as well as in-person in a very limited capacity.

“All things considered, we are carrying out our mission in the craziest of circumstances,” Della said.

Part of that mission involves a collaboration with celebrity chef Jose Andres’ nonprofit World Central Kitchen, turning the organization into a distribution center. On a recent Friday, a table was set up just inside the entrance to the 3101 Kingsbridge Terrace facility, where people could find packaged meals.

Between walk-ins, Rodriguez called neighbors on the phone to make sure they were doing all right, given the circumstances, and to let them know the center would be there for them through the uncertainty. Each walk-in was like a joyous reunion, and arrivals were staggered, so as to minimize crowding and contact between people.

“It’s a good feeling to be able to assist people even if it is just with a meal,” Rodriguez said.

Food distribution is the extent of the center’s in-person offerings. Everything else is remote, including its mental health and early childhood programs, which began March 23.

“The main focus is to be ready as soon as the city says it’s time to go back to your buildings,” Della said.

With the rapid pace of the pandemic, there was next to no time to adapt to the nearly complete erasure of public life — from restaurants and bars to theaters and libraries. Over the course of a week, the city barreled toward a total shutdown, under the combined auspices of de Blasio and Cuomo, though it was the latter who sealed the state’s fate with a March 20 executive order that shuttered all “non-essential businesses,” moving many of them to a work-from-home model, among other things.

KHCC is considered an essential business, but it still has pared back its on-site staff as a precautionary measure.

Each workplace has its own rhythm, and it isn’t often that a cataclysmic event like a pandemic upends life in such a seismic way. The one-two punch of isolation at home and a global crisis is debilitating, and to that end, Della and members of her staff have collaborated to boost morale.

“We’re trying to advise self care,” Della said. “We’re doing something that we call ‘KHCC Together at Home.’”

On March 20, the second day of spring, that took the shape of a dog walk through Brust Park. Della walked her own canines, Lluvia and Yankee, livestreaming it to several of her colleagues. Della narrated the walk, giving her colleagues the opportunity to suggest tricks that would then earn her pups treats.

It was a few days before the shutdown, and there was a smattering of people enjoying the balmy weather. With the world in the grip of uncertainty, Della offered a small respite with two dogs eager for treats.

At the end of the walk, one of her colleagues suggested “roll over” as the last trick. They’d already had success with “sit” and “paw,” but this was an order of higher magnitude.

“We’ve never attempted a trick of this proportion before outside,” Della said as she sat on the edge of a bench in the upper section of Brust Park.

Under the light of a warm spring sun, it was almost possible to forget about the pandemic, and for the briefest of moments, the lives of Della and a few of her colleagues hinged on what Lluvia would do. First, Della told Lluvia to sit, which she obliged. Then to lay down, which took a few tries.

Lastly, Della told her to roll over. And to the delight of everyone, that’s exactly what Lluvia did.