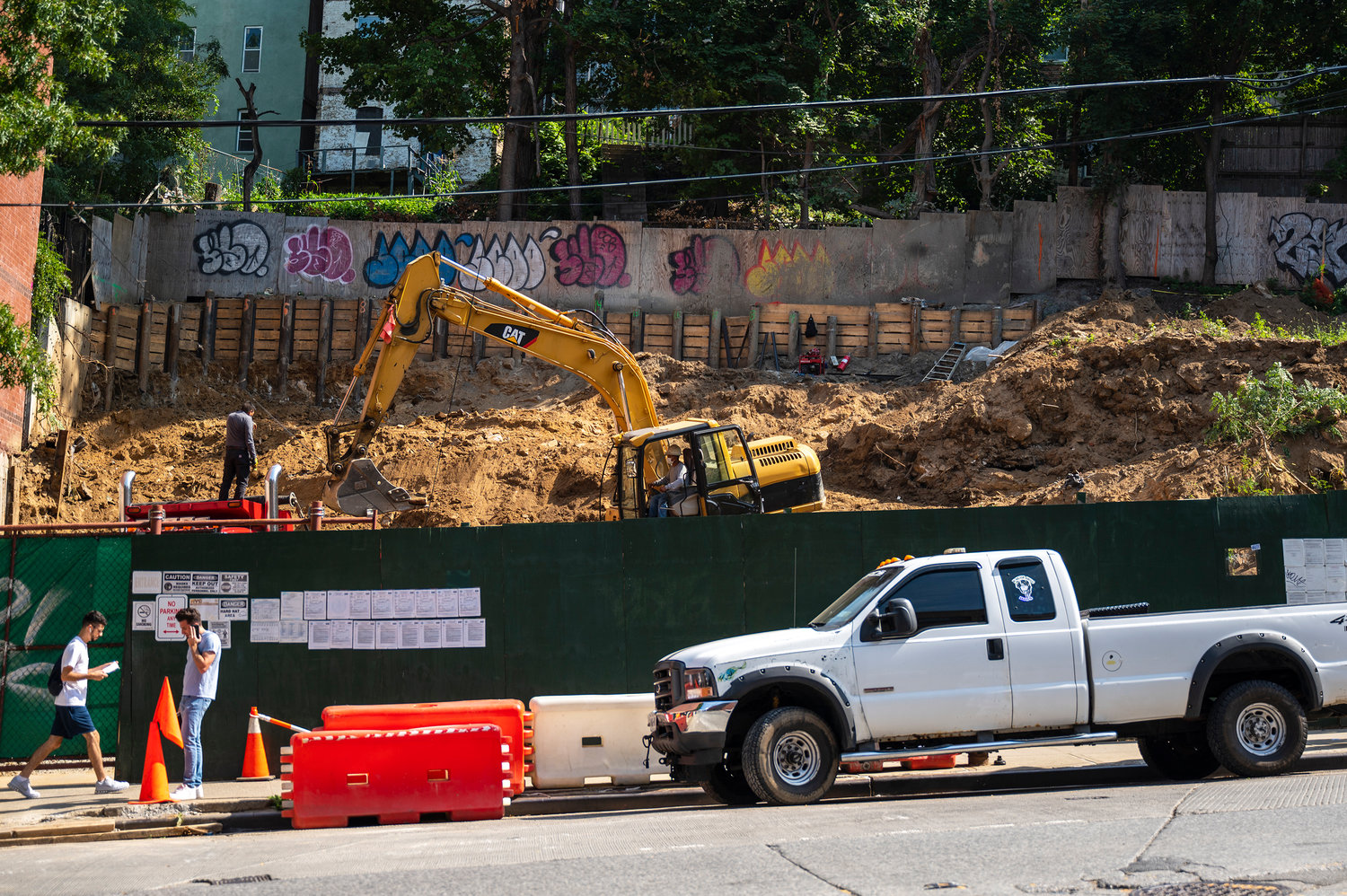 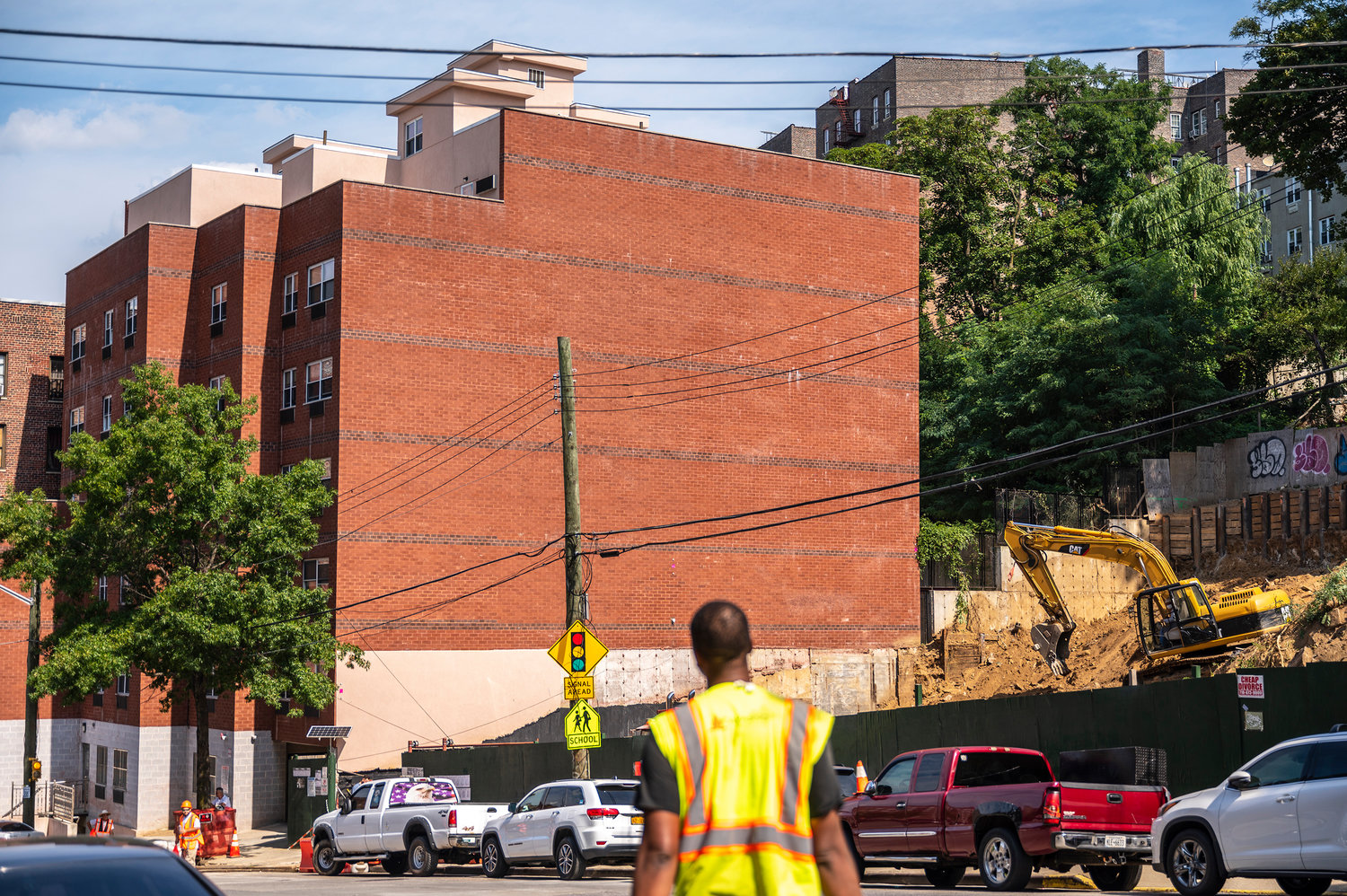 Paul Durgaj purchased 235 West Kingsbridge Road in 2015 — his first investment on the block — and has since erected a seven-story residential building on the lot, completed in 2017.
Hiram Alejandro Durán
Previous Next
Gunshots shatter peace on W. Kingsbridge Road

A public information officer for the NYPD confirmed that an unknown male fired from a car at another unknown male on the sidewalk in front of 201 West Kingsbridge Road at 1:40 p.m. No injuries were reported, the spokesperson said. An investigation is ongoing.

“I was there with a few guys. Everybody was scared,” said developer Paul Durgaj, who heard the gunshots ring out while he was working alongside his crew at the excavation site where he plans to construct two new mixed-use residential buildings.

“There were two or three young kids in a car. They shoot at this guy on the sidewalk,” Durgaj said. “The bullets went very close to 235 W. Kingsbridge.”

The shooting happened a day after Durgaj appeared at Community Board 8’s land use committee meeting to respond to concerns about his construction permits and complaints stemming from the existing building, which is part of the city’s shelter system but is not a hotspot for crime.

Police have responded to domestic incidents at 235 West Kingsbridge Road but “there are no reports on file based on the other types of criminal activity,” a spokesperson said.

“That means it was a family or domestic incident, so it’s invasive for us to get into it. It happens all over the city. It doesn’t mean that crime is up because of activity at that address necessarily,” the spokesperson added.

Reached by phone Monday, a spokesperson for the property manager of 235 W. Kingsbridge Road said. “There is absolutely no drug activity in that building.”

She said there are cameras throughout the building that provide 24-hour security. There are social service providers on-site, and residents also have access to off-site mental health and substance abuse counseling and preventive services that provide training in topics like independent living and parenting, she noted.

“There’s a lot of activity on that corner near the pediatric medical office,” she said.

“If you pass by you will see a lot of individuals hanging out there. I know the community has had issues on that corner, but if you look at the precinct activity, you will see that that activity was going on before that building existed.”

The last of a row of boarded-up Queen Anne style homes disappeared last summer to make way for two mixed-used buildings at 215 and 229 West Kingsbridge Road — the brainchild of developer Paul Durgaj.

Together they will bring 60 new market-rate apartments around the corner from P.S. 310, where traffic zigzags past a series of step streets on its descent towards Heath Avenue and the Bruckner Expressway.

Durgaj has a mixed record with the city’s buildings department. He has already erected a seven-story residential building at 235 W. Kingsbridge Road in 2017.

The building is part of the city’s shelter network and provides temporary emergency housing to families and single adults, according to the current property manager, who was reached by phone. The Bronx Parent Housing Network will take over as the site’s service provider Oct. 6, she said.

Durgaj also owns about two dozen residential properties in the Bronx ranging in size from three to 40 units, according to city property records. He is a general contractor and also holds a Realtor’s license.

The steep grade and billion-year-old bedrock of west Kingsbridge Heights gives many developers pause. Manhattan-bound traffic flows heedlessly past the commercial zone sprouting along West Kingsbridge Road as the road makes its way into the valley where Tibbetts Brook is buried. Rentals abound in this square mile grid of six- and seven-story walk-ups and two-family homes.

Five years ago, Kingsbridge won the top slot in StreetEasy’s ranking of the city’s next hottest neighborhoods, beating out Fort Greene and Astoria on key indicators like annual change in median rent and sales price, population growth, and page views on its website.

It seemed like a good omen for homeowners like Noel Gonzales, who works in television and invested in a home on Kingsbridge Terrace in 2011. But Gonzales has been less than impressed by Durgaj Properties Corp.’s craftsmanship. The concrete steps at the ground level of 235 W. Kingsbridge Road appear to have been improperly poured, he noted, and there’s paint splattered at the lower level.

“That building is a major eyesore,” Gonzales said. “They clearly cut corners. As a homeowner, it was exciting to see that change is coming, and hopefully for the better.

“But where is the buildings department? How did they get their certificate of occupancy with the building looking like it does?”

In fact, in 2017 and 2018 the buildings department issued several class 1 summonses to contractors at 235 W. Kingsbridge Road — then a construction site — for immediately hazardous conditions. Civil penalties for this type of violation begin at $2,500 and accumulate daily until the issue is rectified.

Since it was completed, Community Board 8 has received a number of quality-of-life complaints about 235 W. Kingsbridge and the adjacent demolition site.

Reached by phone Monday, a spokesperson for the nonprofit provider that manages the building noted that she often sees people sitting on the corner of West Kingsbridge and Heath Avenue who have no connection to 235 W. Kingsbridge Road.

“235 W. Kingsbridge has 24-hour security seven days a week,” the spokesperson said. “There is absolutely no drug activity in that building.”

In a hearing before the land use committee Sept. 6, Durgaj agreed to take action to address the complaints and will appear again before the committee on Oct. 3.

“This has all the earmarks of a problem,” land use committee chair Charles Moerdler said forebodingly.

A summons is currently open at 215 W Kingsbridge Road pending certification of correction. Reached by phone Friday, Durgaj said the summons is a remnant from a structure that has since been demolished.

“The DOB, they always go back and forth,” Durgaj said. “But I want to improve the neighborhood. These are going to be regular market-rate buildings. I’m not like Tishman Speyer putting in 340 units. Anybody who stops by, I’m there all the time. I have cameras in the front and back and basement. I have security there and I’m at the construction site every day.”

Construction permits at 215 and 229 W. Kingsbridge Road cannot be approved until Durgaj and his designer, Node Architecture, Engineering, Consulting PC, make corrections to their pavement plan.

“It was disappointing when developers came in and knocked down these beautiful homes and New York allows just any building to go up there,” Gonzales said.

“I get that people need housing. With all of this attention, maybe his next building will be better.”