Kingsbridge on brink of recovery? Not so sure 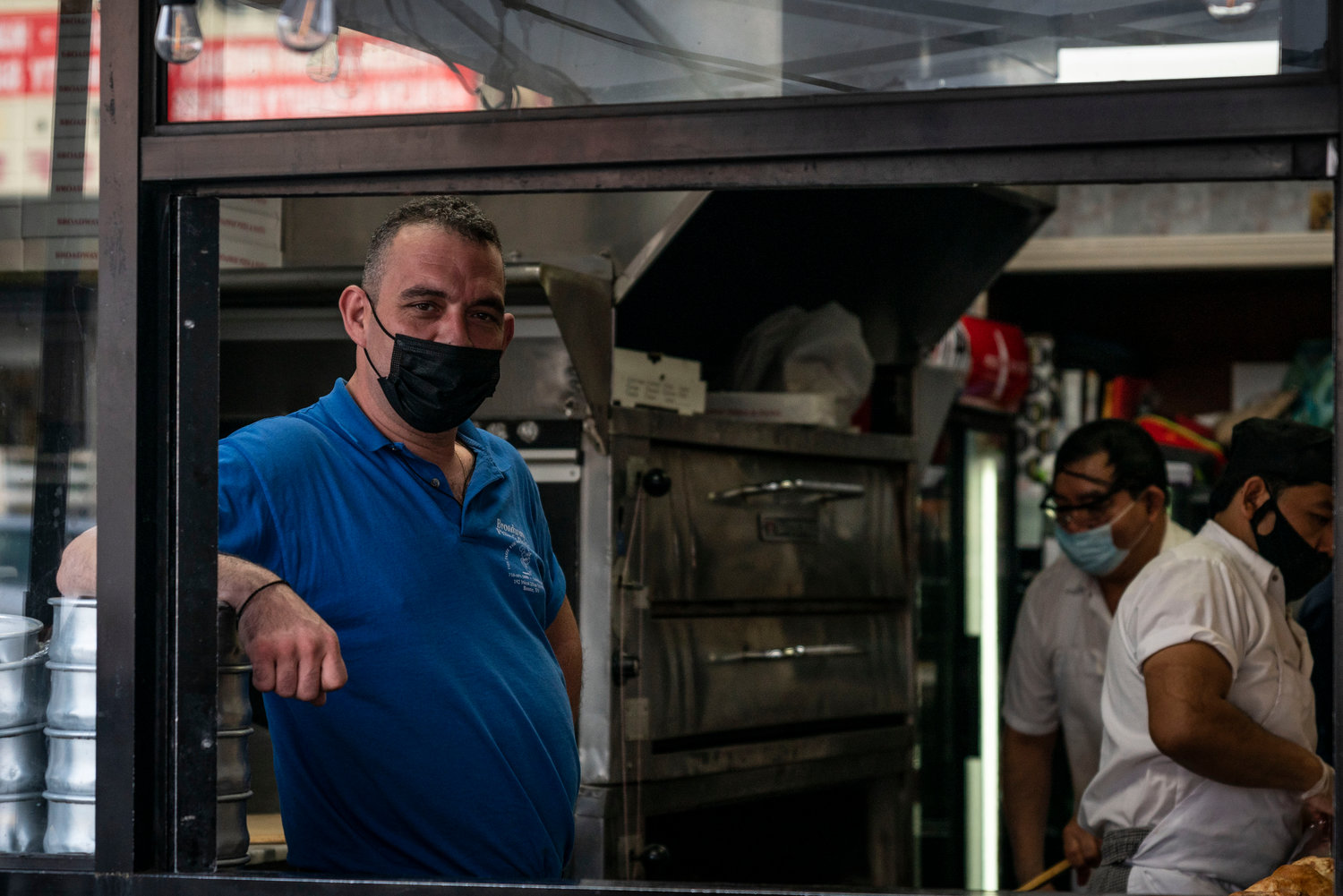 John Kambouris has owned Broadway Pizza and Pasta for 20 years, but the business is struggling after months of closures, and being limited to just takeout and delivery. Even so, the city’s planning department has found Kingsbridge’s businesses have fared well compared to other city corridors in weathering the coronavirus pandemic.
HIRAM ALEJANDRO DURÁN 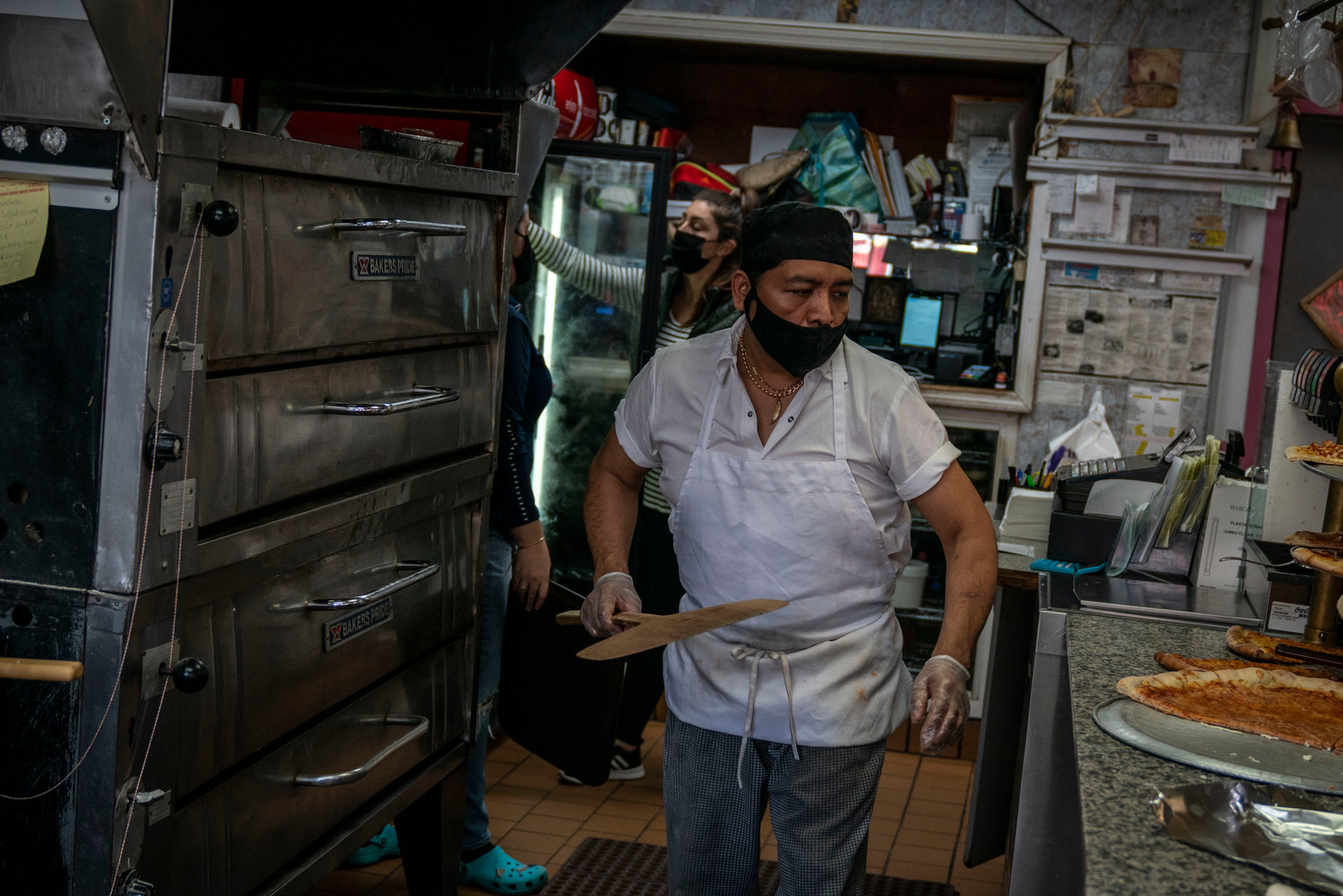 A survey by the city’s planning department found Kingsbridge had fared particularly well among business districts in the city, with 83 percent of businesses staying open compared to 2018. But for John Kambouris, owner of Broadway Pizza and Pasta, staying open isn’t enough.
HIRAM ALEJANDRO DURÁN 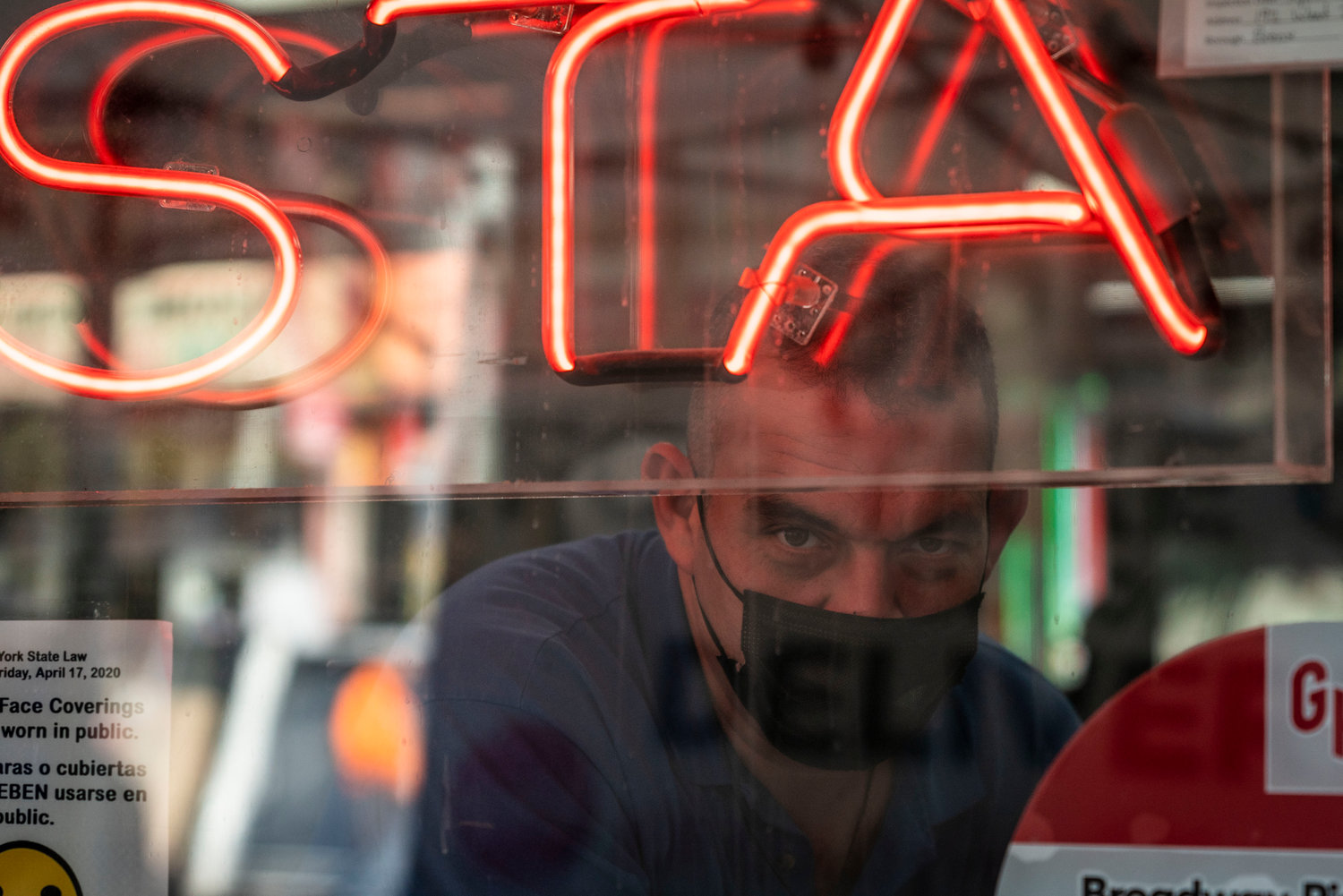 Staying open is important, but it’s not quite everything. A study by the city’s planning department found 83 percent of Kingsbridge’s businesses managed to stay open through the coronavirus pandemic compared to 2018. John Kambouris, the owner of Broadway Pizza and Pasta, says he and other local business owners are struggling — and they’ll need help to make it through the winter.
HIRAM ALEJANDRO DURÁN 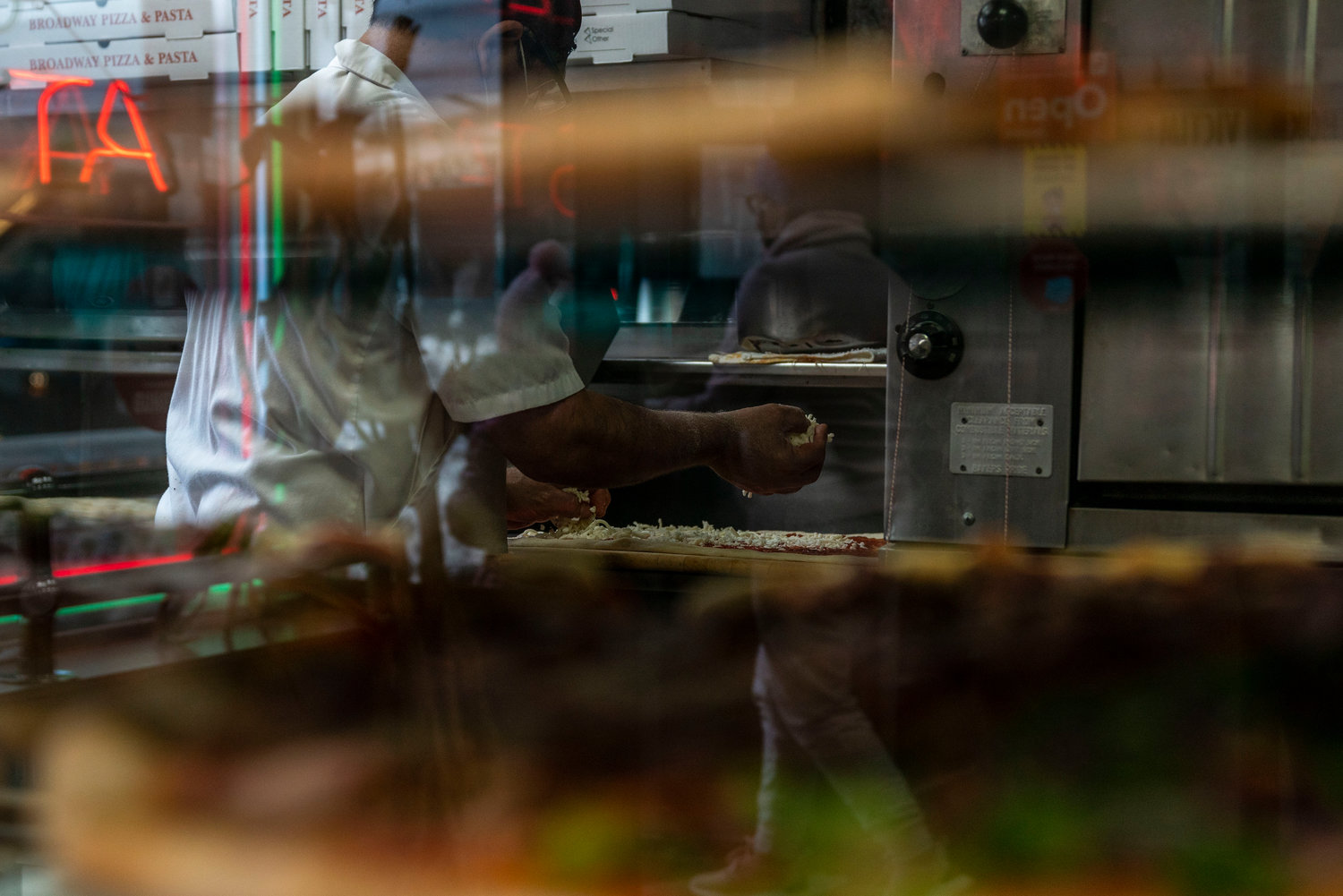 Paying employees, rent, and trying to turn a profit have all become more difficult for small businesses this year. But while a majority of Kingsbridge businesses have stayed open so far, it’s getting harder to keep that momentum going.
HIRAM ALEJANDRO DURÁN 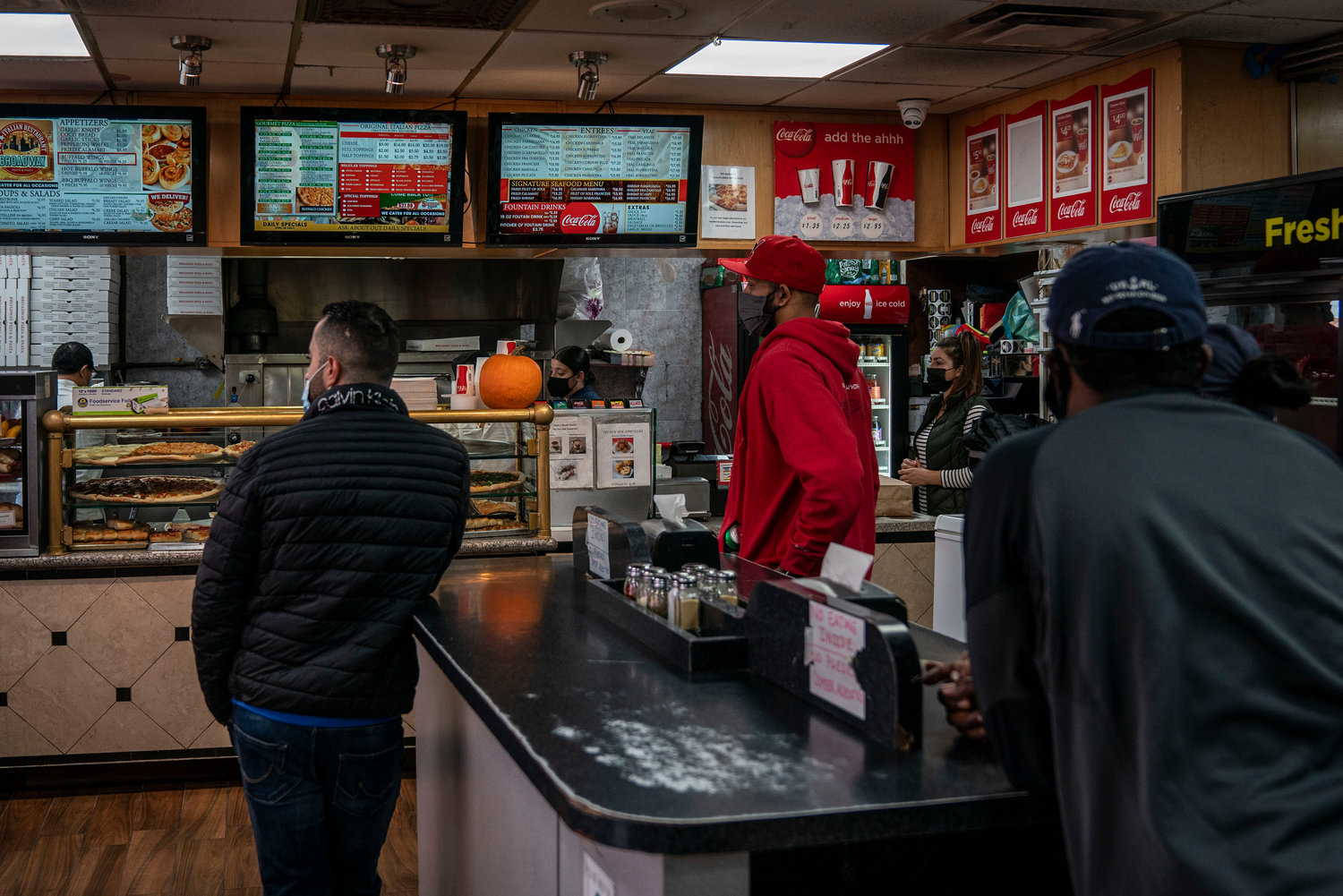 A report from the city’s planning department has found good things for Kingsbridge’s small businesses, which have stayed resilient through the coronavirus pandemic. John Kambouris, owner of Broadway Pizza and Pasta, says while his business has stayed open, it hasn’t been easy — and hard days are still ahead.
HIRAM ALEJANDRO DURÁN
Previous Next
By KIRSTYN BRENDLEN & MICHAEL HINMAN

It’s been a long, hard year for businesses. But you don’t need to hear that from us.

With seemingly never-ending closures, fewer customers, and a coronavirus pandemic-induced recession on top of that, keeping the lights on and employees paid has been a struggle for many. Vacant signs have cropped up all over the city as businesses shutter, and it could be quite some time before new tenants move in.

But how bad is it? That was the question the city’s planning department hoped to answer — and it already had a head start. Planners had partnered with mapping company Live XYZ to study retail activity across 24 New York City business corridors back in 2018. Revisiting those corridors this past July could, if nothing else, give city officials a snapshot had how hard the virus has hammered business.

The result? Pretty hard. Where a little more than 13 percent of businesses in these corridors were either closed or vacant in 2018, that number jumped to 32 percent last summer as New York City entered the fourth phase of its economic reopening.

Bad news for everywhere — except Kingsbridge. The stretch of Broadway near West 231st Street was one of three Bronx corridors studied by city planning, and the only one in this part of the borough. Of the more than 250 businesses surveyed in Kingsbridge, 210 were opened.

That accounted for 83 percent of businesses in the corridor — a change of just 7 percent over 2018 — which was far better than every other area except Brooklyn’s Fulton Mall. Pandemic impacts ranged from as little as 10 percent change in the Upper West Side, to more than 36 percent closing since 2018 in Manhattan’s Flatiron and Union Square neighborhoods.

“We were cautiously, sort of optimistic about the proportion of businesses that had reopened,” said Dylan Sandler, a senior planner who was one of five people administering the survey.

“What this doesn’t tell us, however, is more information about sort of the health of the businesses that are open. So there’s a lot more about how much revenue businesses are bringing in, and sort of how they’re faring. That may impact how this number changes over time.”

That’s not how it feels on the ground

The report paints a rosy picture for Kingsbridge — one that surprised John Kambouris, owner of Broadway Pizza and Pasta. His family has owned the West 231st Street restaurant for 20 years, but the pandemic has not been kind.

“We’re still struggling,” Kambouris said. “Things really didn’t get that much better. My business depended on my catering orders and all the schools in the area.”

In fact, catering accounts for half of Kambouris’ business, serving meals for events, schools and local hospitals. With large events non-existent — and city schools fluctuating whether students can actually return to campus — outdoor dining allowed in later economic phases was a step up from takeout and delivery only, but it still wasn’t enough to keep business open.

On top of that, their outdoor dining area presented its own challenges. People would stop by with food from other restaurants, Kambouris said, and sit down to eat at his tables. It was a constant struggle to keep the space clear for his own paying customers.

“I don’t know how people could say they’ve recovered well when there’s a lot of places that can really barely pay their rent,” Kambouris said. “So, if you call that recovering, at least 40 percent of the businesses that I know around here are literally shut for good.”

While city planning found Kingsbridge was mostly stable as far as keeping business open, a study by the Association for Neighborhood & Housing Development was less optimistic. According to its report, Kingsbridge had only received 430 small business loans in 2017, compared to a citywide average of 1,623 loans per business corridor that year.

In a borough where nearly 60 percent of households pay more than a third of their income on rent, businesses aren’t exempt from struggles with landlords. The association’s survey found 89 percent of business owners felt “overburdened” by their rent.

A lot of normalcy has returned in Kingsbridge, but with some coronavirus cases rising across the country — and in closer hotspots like Brooklyn and Queens — Kambouris has yet another fear: dropping temperatures. He could buy heaters for the outside area, he said, but it might not be worth it. And the 25 percent indoor capacity currently allowed only gives him a chance to fill a few tables — not enough to turn a profit.

“They want us to be working on 25 percent capacity, maybe they should do our sales taxes 25 percent, our real estate taxes 25 percent,” Kambouris said. “Because if you’re not having revenue, how are you expecting us to pay for it?”

Depending on community rather than commuters

These corridors have something in common, Sandler said: they don’t depend on commuters to survive.

“They’re not commuter hubs, and they’re not relying on a lot of office workers who just aren’t coming in at the moment,” he said. “We saw this trend a lot. Midtown and Lower Manhattan seemed to have fewer businesses that were open in July, then a place like Kingsbridge, that really is serving a residential population in the vicinity.”

That might look like good news from a macro perspective. But much closer to home, that optimism isn’t shared. Not even at Broadway Pizza, which is literally just steps from the 1 train’s West 231st Street stop.

“I’ve been here a little over 25 years, and we’ve never seen this,” Kambouris said. “This is just depressing. You come to work to barely make ends meet, and then put yourself in the hole.

How much of a hole can you put yourself into before you say, you know, enough’s enough?”