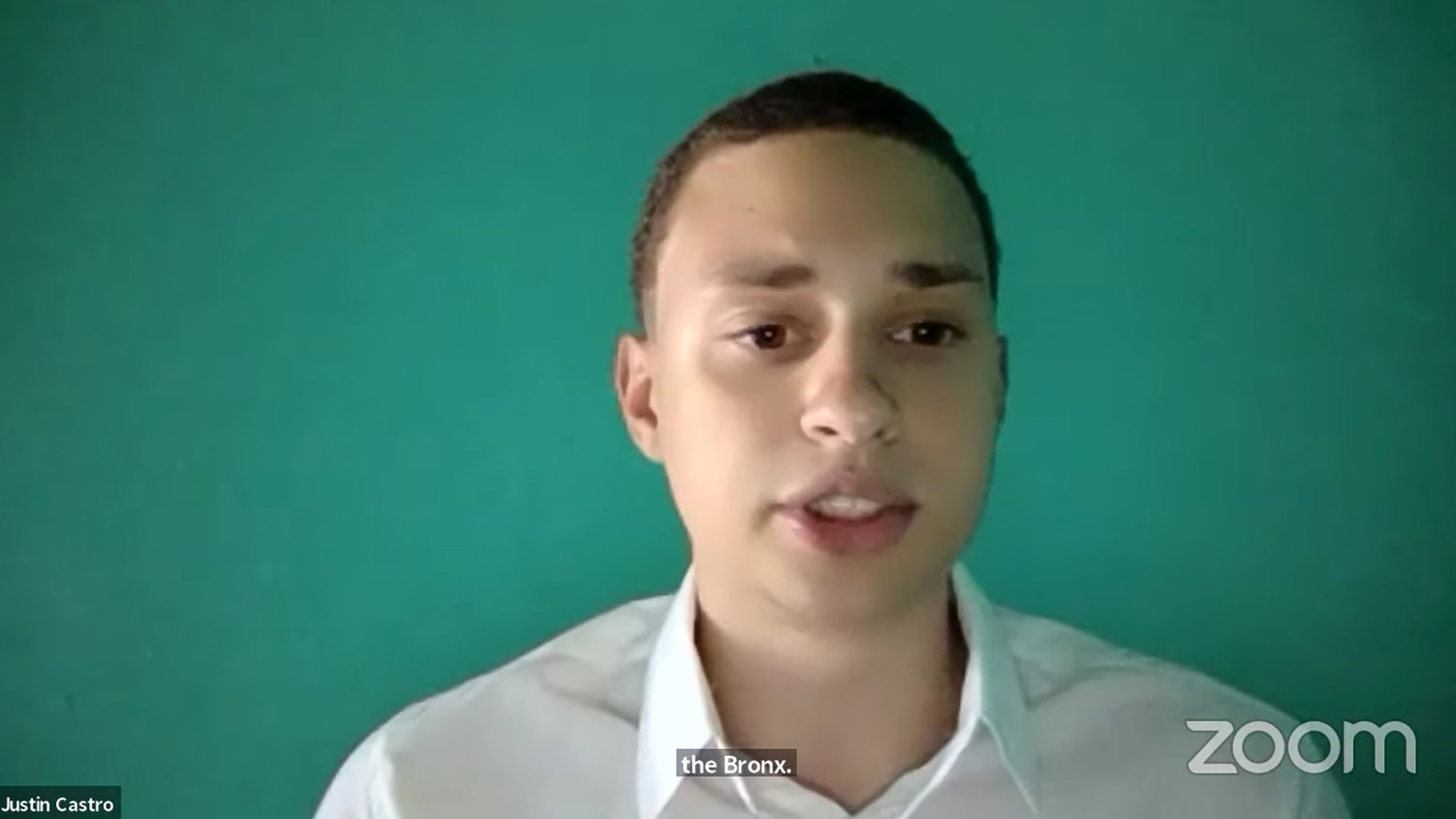 Marble Hill Houses resident Justin Castro called on the commission to unite all buildings in the housing complex under one district.
Courtesy of the New York City Districting Commission 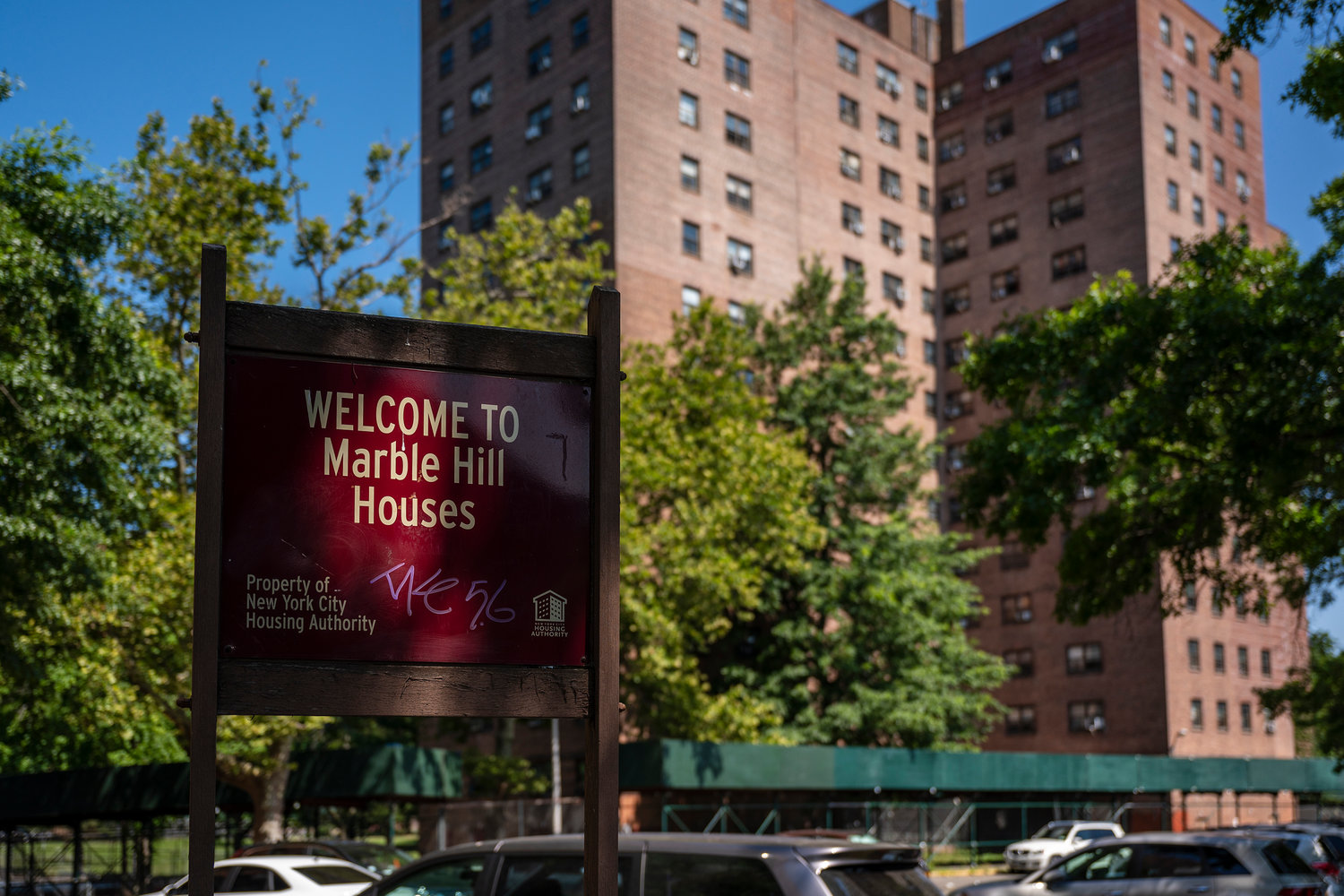 At a public city council redistricting hearing last Wednesday all talk regarding the northwest Bronx had to do with unifying the Marble Hill Houses into one district.  Yet a law written to ensure that all council districts are apportioned in a fair manner may be the one thing preventing that from happening.

Right now, the majority of residents in the 11-building New York City Housing Authority residential complex live in district 10, which covers the northern tip of Manhattan. The district “has historically been a part of the Marble Hill political identity. Yet more than a technical identity, many residents of Marble Hill have strong ties in Manhattan,” Justin Castro, who lives in the complex, said at the meeting.

Then the residents who live in the three buildings along Exterior Street fall into district 14, which mostly covers parts of Kingsbridge Heights and University Heights. Finally, one building falls into district 11, currently represented by Eric Dinowitz.

“Just 10 percent of that population is split in two different ways,” Castro said. “There’s no rhyme or reason for this configuration, other than viewing these communities as dispensable scraps to make up the population in the neighboring districts.”

While in theory having multiple council members could yield more resources, most of the speakers argued that it actually weakens the community’s voting power. “This is yet again the wonders of the political world in New York City where Marble Hill residents’ voices are divided and their electoral strength diminished,” said Fulvia Vargas-De León, a senior counsel at LatinoJustice PRLDEF.

To right this wrong, the majority of the speakers urged the commission to draw the entire complex within council district 10.

Unfortunately, Marble Hill’s geographic eccentricities don’t stop with the council lines. While the property falls on what is seemingly the Bronx side of the Broadway Bridge, the 16-acre complex actually straddles the border between Manhattan and The Bronx.

That split creates quite the sticky wicket for the commission. Although the city charter discourages drawing districts across borough lines, it does allow it. But there can only be one district that crosses over into the same two boroughs. In other words, the commission cannot draw two districts that include both the Bronx and Manhattan.

So if district 10 were to comprise all of Marble Hill Houses, then it would have to cross over into The Bronx.

Yet there is already another Manhattan-Bronx crossover district. Council district 8, represented by Diana Ayala, starts in East Harlem, jumps over the river into Mott Haven and then travels up along the Major Deegan Expressway — with a more-or-less even split between the two boroughs.

In order for that district to fall into just one, the commission would have to significantly rework its lines. Whereas to unify Marble Hill, the new district 10 would only have to creep just ever so slightly into the Bronx.

“That’s not going to be the place, I don’t think, where the commission is going to choose to spend their one ticket to cross the Manhattan-Bronx boundary,” said Jessica Haller, the current executive director of 21 in ‘21, an organization that aims to achieve gender parity in city council.

As part of her work, Haller has been looking closely at the redistricting process and submitted written testimony to the commission earlier this year.

“With three councilmembers, the (Marble Hill) residents have diluted power and much more onerous and complex communications needs to make requests of their councilmembers,” she wrote. “They are both on everyone’s radar and no one’s ultimate responsibility. Given the challenge of limiting districts that cross borough boundaries, and the fact that the Marble Hill Houses themselves cross between The Bronx and Manhattan, I’d ask the commission to consider reducing three districts to two — one in the Bronx, and one in Manhattan.”

There are several other factors the commission has to also juggle — all of which are ranked in order of importance — when drawing the new lines. First and foremost, the districts must have an equitable population distribution — one person, one vote.

If all districts were apportioned equally, they would each have 172,631 people. According to 2020 census data, Dinowitz’s district, which covers most of the greater Riverdale area, has a population of 163,918 — just about 5 percent shy of that golden number.

The second most important factor: racial and ethnic minority communities cannot be split up so as to dilute their voting power. Other remaining guidelines include making sure districts remain compact and contiguous while still following neighborhood borders, as well as ensuring lines are not drawn in an effort to split up voters registered to the same party.

Given all of these other mandates, the commission is limited in its ability to redraw the new lines. Often these constraints work to weed out partisan gerrymandering and other discriminatory practices.

But in this specific case, the charter, in combination with Marble Hill’s unique geographic makeup, creates a roadblock to achieving voting equity — or at the very least complicates the matter.

The commission is expected to drop drafts of the new council maps on July 15.