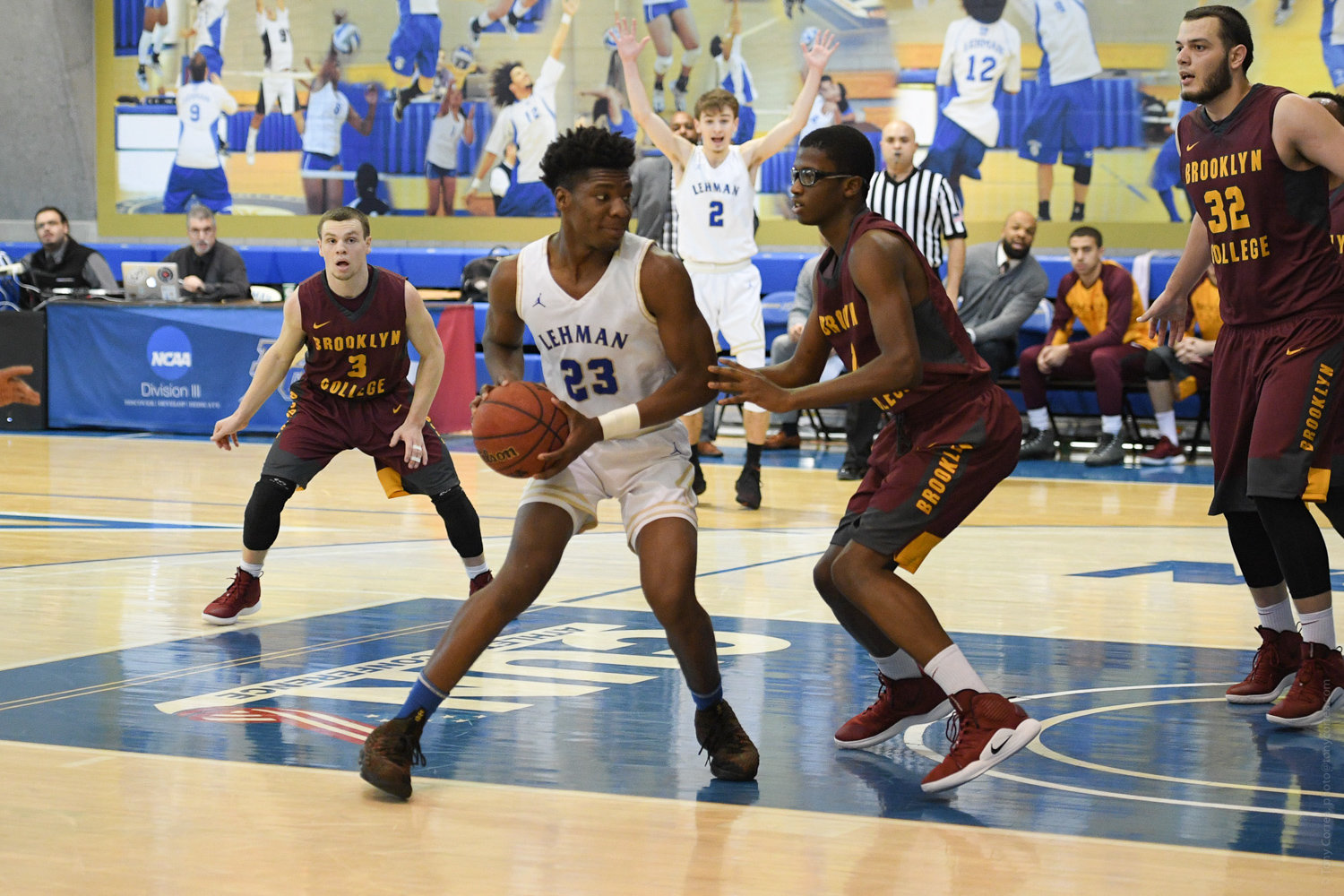 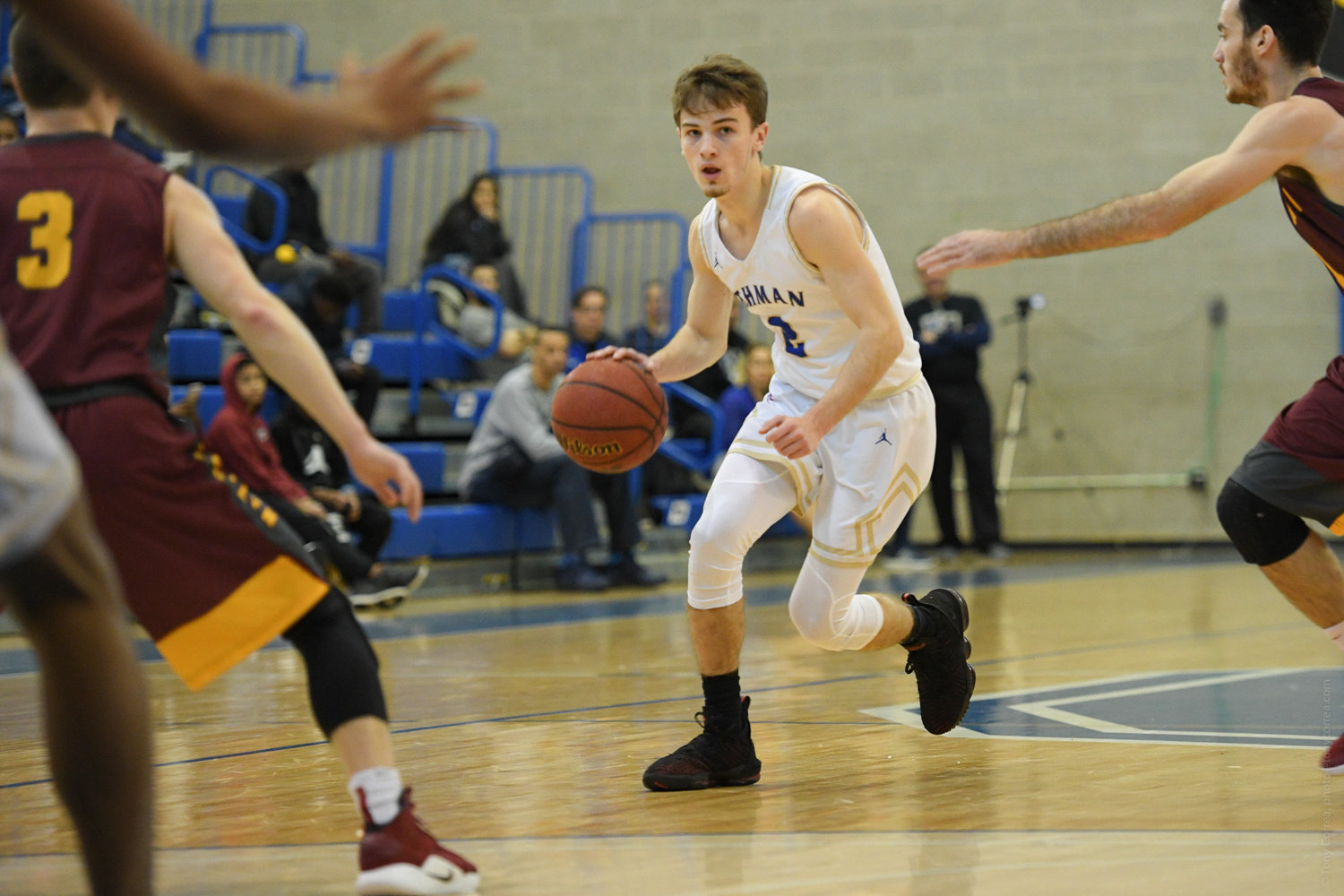 Lehman College sophomore guard Will Feldman makes his way up the court during the Lightning’s overtime win over Keystone College last week.
Courtesy of Lehman College
Previous Next
By SEAN BRENNAN

Last year was a rarity for the Lehman College men’s basketball team. Like spotting a unicorn in Van Cortlandt Park sort of rarity.

That’s because the 2018-19 season was a forgettable one for the Lightning, a year that saw them win just nine games overall, post a sub-.500 record in the City University of New York Athletic Conference, and be a one-and-done team in the conference tournament.

All this came after five straight seasons that saw Lehman post 17 or more wins, reach the conference semifinals four times, and the championship game once as the Lightning were regular contenders for the CUNYAC title.

Last season’s mediocrity was expected after the Lightning graduated eight seniors, including stars Luis Hernandez and Andrew Utate. But this season, a turnaround could be on the horizon as many players on Lehman’s roster now have at least one season of experience under their belts.

“I think we’re going to be way better,” said sophomore point guard Will Feldman, who starred in high school at Riverdale/Kingsbridge Academy. “All the guys that we have returning, they all witnessed what we went through last year, and this year we’re looking for something way bigger and way better.”

Key among the returners Feldman points to are junior Isaiah Geathers — who is second on the team in scoring at 14.2 points a game — and senior Tommy Batista and his 10.3 points per outing.

“But we also picked up a couple of new guys who came in and went to work and are looking good for us this year,” Feldman said.

And one of those guys is junior guard Gian Batista.

Batista — no relation to Tommy Batista — put on a show in his first game at Lehman last week when he scored 27 points as the Lightning knocked off Keystone College 87-84 in overtime in their home opener at the Apex. Geathers was also a major contributor as he scored six of his 15 points in overtime.

It’s early in the season but Feldman already has a high opinion of Batista.

“He’s probably the best player I’ve ever played with,” said Feldman, who had a game-high seven assists in the win over Keystone. “Just his will to win is amazing. He’s just a really good basketball player.”

Another of the newcomers that has Feldman excited is Alex Hanson, a 6-foot-5, 225-pound bruiser from Columbus High School. Hanson posted a double-double in the win over Keystone with 10 points and 12 rebounds.

“He’s a big man and a beast on the boards,” Feldman said. “But Sybri Traore (a 6-foot-3 forward) and Ocean Scott (a 6-foot-3 guard) are both going to be really good ballplayers, too.”

The Lightning is off to a 1-3 start after dropping a 77-58 decision at St. Joseph’s College of Brooklyn last Saturday. But Feldman said Lehman will use the non-conference portion of its season to continue to build team chemistry and fine-tune itself for CUNYAC play. That opens with a pair of home games versus John Jay and York College on Dec. 3 and Dec. 6 before picking up again in January.

“Coach (Steve Schulman) thinks highly of us this year,” Feldman said. “I think he thinks we could possibly go all the way. But he just wants us to get better in practice every day. He told us the best teams he’s ever had always came into practice every day and competed, and that’s what he needs from us.”

Lehman was picked fourth in the CUNYAC Preseason Poll, not bad for a team coming off a nine-win season. But it’s clearly not where the Lightning sees itself in the conference.

“I don’t think a lot of people know about us yet, what we’re all about,” Batista said. “But we’re going to show them what we’re about.”