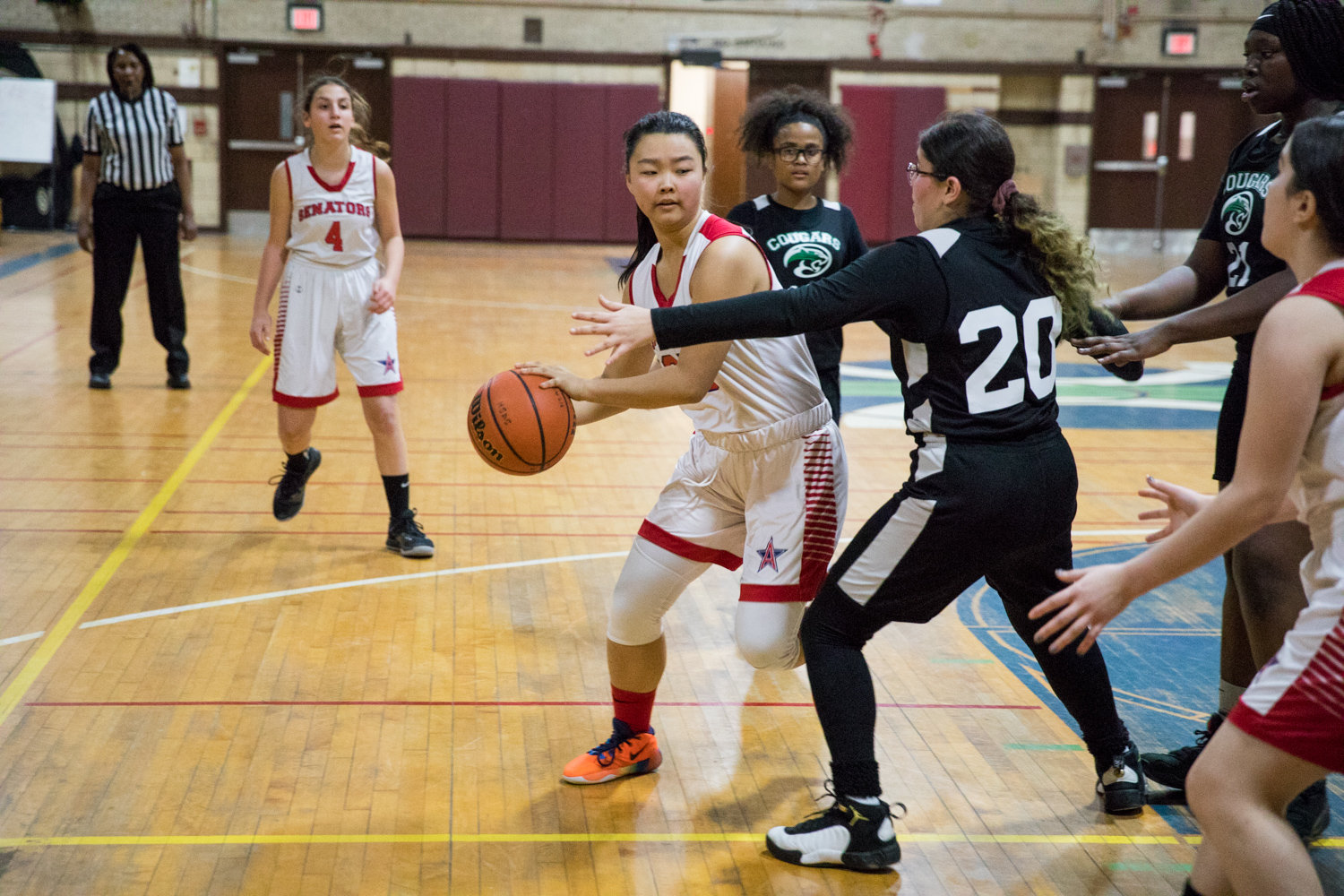 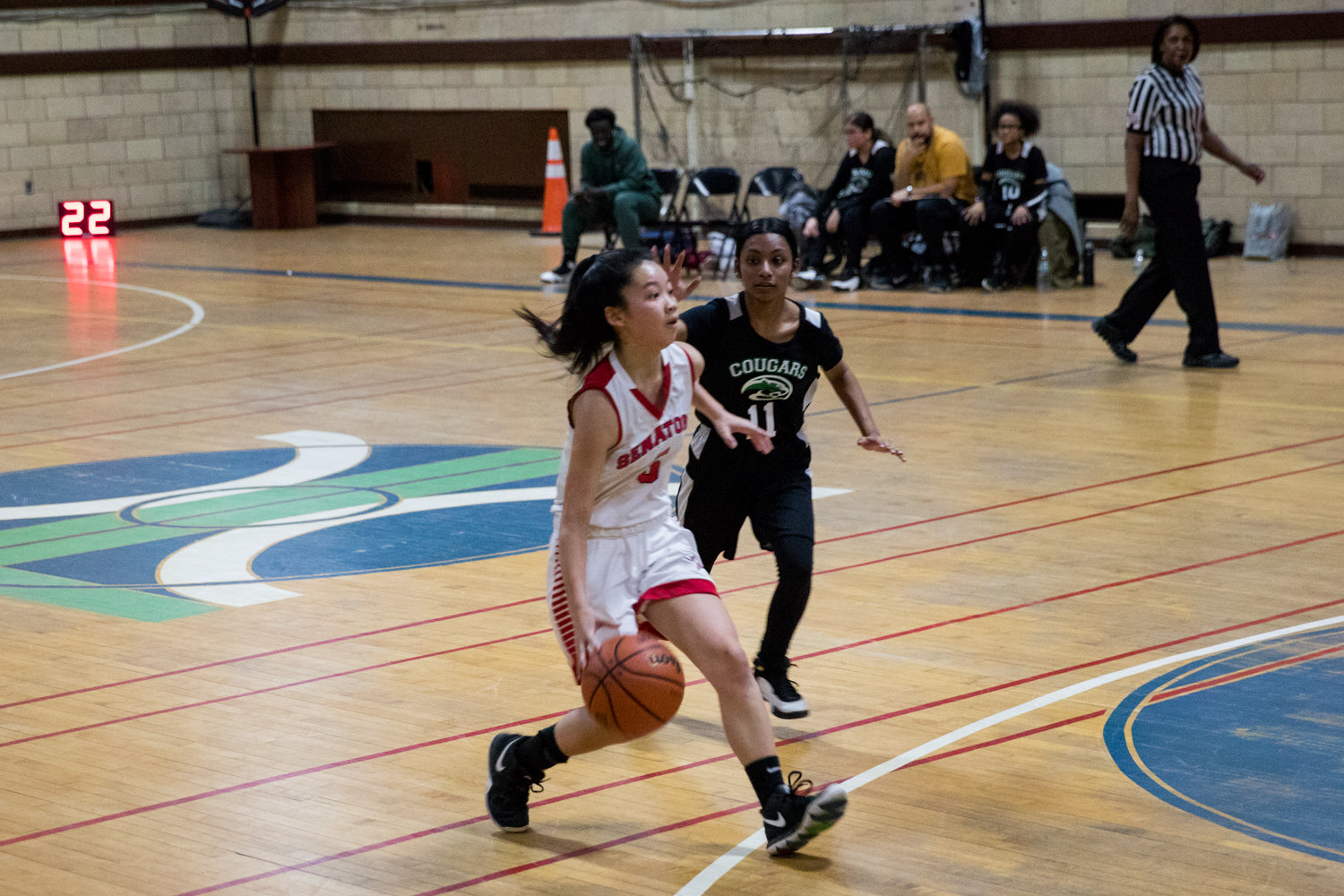 American Studies knows the final two weeks of the girls basketball regular season will be pivotal ones for the Senators. This week will feature games at neighborhood-rival Riverdale/Kingsbridge Academy before a home game against Tuitt — one of only two teams to defeat the Senators this season.

After that, in the final week, there are road games at Taft — a “gimme” win — before the regular-season finale at Gompers, who handed American Studies their only other loss this year. So focus, execution and attention to detail will be vital.

But none of that was necessary last Friday when the Senators hosted an overmatched and overwhelmed Marie Curie team. And despite some dicey play in the game’s opening quarter, the Senators barely broke a sweat, steamrolling Curie 47-14 at the Old Gym Building at Lehman College.

American Studies wasn’t sharp in the early going, missing several layups and putback attempts. And while that may have buried the Senators in an early hole against a higher-quality outfit, it was not the case versus Curie, which trailed 16-2 after the first quarter, and 28-2 by halftime.

This coming with most of the Senators’ starters sitting for a good portion of that.

“I thought our first five (starters) came out a little soft,” Senators’ head coach Ryan Hondorf said. “I was expecting a little bit more out of them. But we were just working on some things. We were focusing on getting the ball inside more and not taking as many outside shots. And we wanted to get some of our bench players some time to develop and get some experience, too.”

The Senators’ usual main contributors — Emily Eljamal, Jackie Harari, Alexis Guberman, Emma Bartolazo and Cayla Klein — combined to score just 23 points, spending big chunks of their afternoon watching others take down Curie. Tops among those who saw a lot of court time was junior Suzuki Lin, who led all scorers with 17 points.

By the time the third quarter ended with the Senators up 37-6, Eljamal, Harari, Guberman, Klein and Bartolazo were relegated to the bench to relax and firm up their weekend plans, while Lin and company mercifully finished off Curie.

But now it gets a lot more serious for the Senators, a two-week span that will see them looking to avenge a pair of four-point losses to Tuitt and Compers in their first meetings this season. If American Studies has designs on claiming the Bronx B West Division crown, winning both games is a must as currently American Studies and Tuitt sit tied for second place with 12-2 records. Gompers is alone in first place at 13-1.

The matchup with the Lady Panthers Friday afternoon will come on a special occasion for Eljamal, Harari, Klein and Bartolazo. Something that will give a little extra sizzle to the game.

“Tuitt is on our senior night, so we’ve been working really hard toward that game,” Harari said. “We hope there’s a huge crowd here for that one so it can put some pressure on them.”

The Tuitt game will also mark the final home game for the Senators quartet of seniors, with the exception of a possible home playoff game, of course. Still, it’s not a favorite topic of conversation.

“Someone always makes a comment about that, and we’re all like, ‘Don’t say that. You can’t say that,’” Harari said. “It’s definitely in the back of our heads, but we try not to think about it.”

Instead they think about the task at hand — winning the division title and snagging a top seed in the upcoming playoffs.

“The goal is still there, 100 percent,” Hondorf said. “We know where we are right now, and we’re going to try and continue to achieve that goal.”