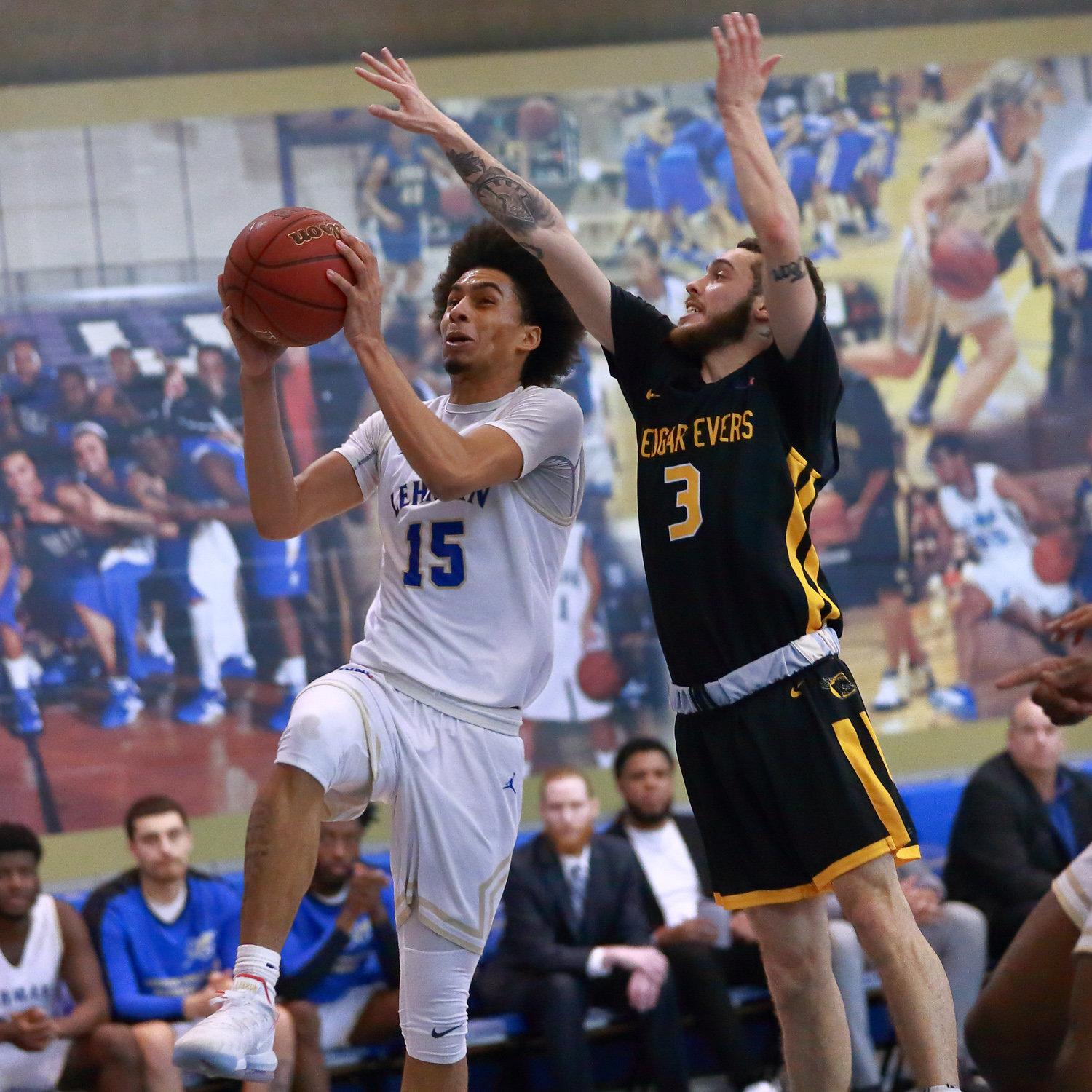 Some hot shooting down the stretch by Gian Batista helped fuel a late Lehman rally and lead the Lightning to a win over Medgar Evers.
Courtesy of Lehman College 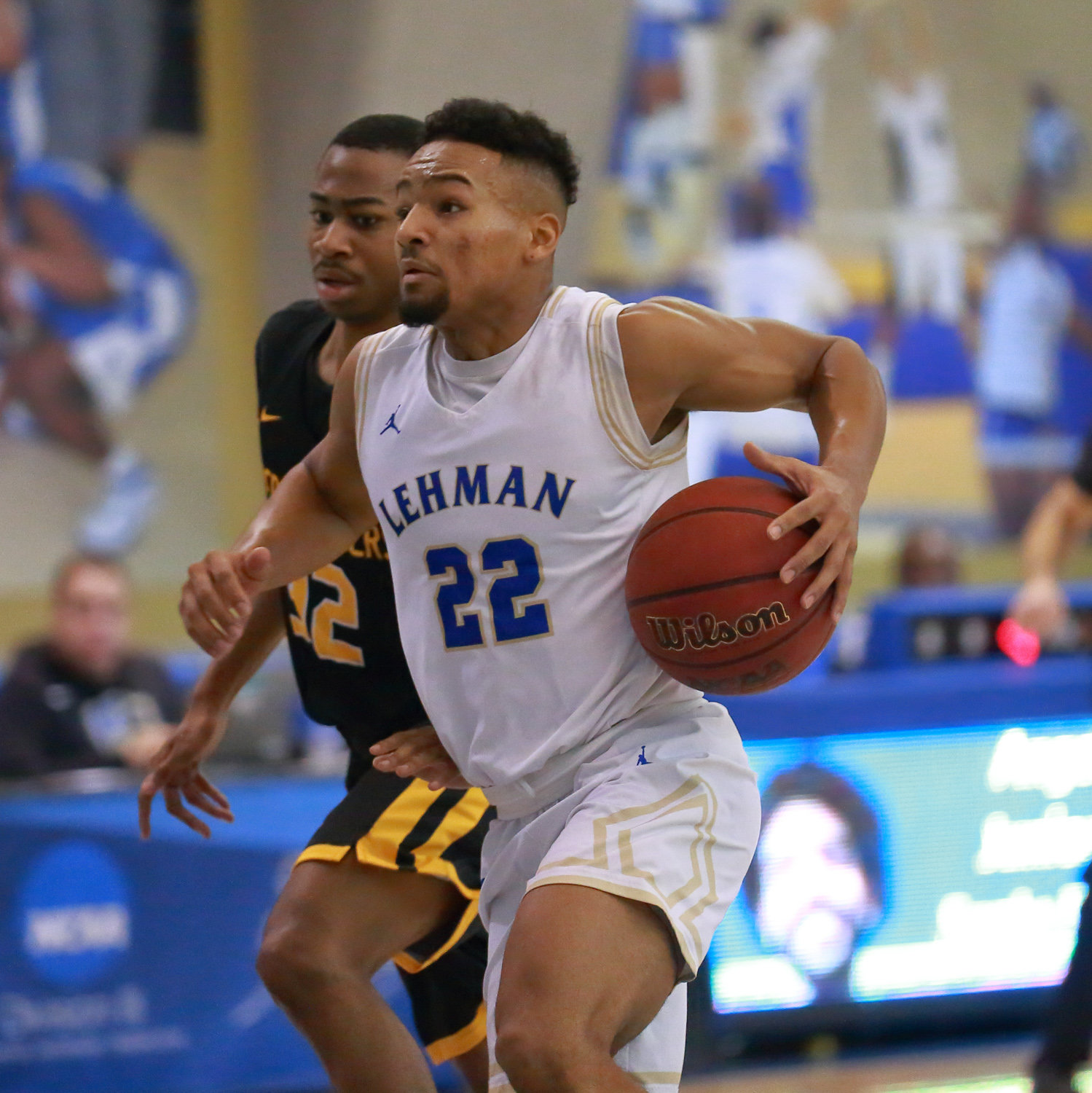 It was Homecoming Day at Lehman College last Saturday, and the atmosphere was a decidedly festive one.

With a large crowd on hand one which featured members of both the 1973-74 and 1974-75 CUNY champion men’s basketball teams. To help keep that  ‘70s theme going was a trivia session at halftime as well as vintage ‘70s-era music played during timeouts (gems such as the Temptations’ “Papa Was a Rolling Stone” and the Allman Brothers’ “Jessica”). There was most definitely a ‘70s vibe in The Apex.

The final ingredient to the feel-good afternoon was the presence of Medgar Evers, a perennial CUNY Athletic Conference doormat, as Lehman’s opponent. So the plan was for the Lightning to smoke the Cougars, run their record in the CUNYAC to 6-2, and put a bow on a fun day for all the Homecomers.

But Evers made Lehman work for that happy ending.

Trailing by one at the half and leading by just two points with 9 minutes to play, Lehman was finally able to put some distance between them and the pesky Cougars when Gian Batista scored nine of his 24 points down the stretch to help the Lightning pull away for an 83-70 victory.

“We don’t take any team for grante,d even though we had beaten them already,” Batista said, referring to the Lightning’s 95-85 win over the Cougars on Jan. 4. “Any team can come in here and win, so we can’t look past anybody. We take every game seriously.”

Lehman started taking Evers seriously after the Lighting found themselves leading only 58-56 and the end of the game in sight. A loss the lowly Cougars would certainly dampen the party at Lehman.

Mo Idrissou got the offensive fireworks started, however, with a three-pointer. And after a free throw by senior Tommy Batista, Gian Batista (no relation) scored five straight points, and just like that the Lightning had its biggest lead of the day at 67-56. Evers never got closer than eight points the rest of the way as Lehman scripted the happy ending to its day.

Isaiah Geathers led the Lightning with 27 points while Idrissou finished with 18. Lehman won for the fifth time in six conference games since returning from Christmas break.

“We play as a team very well,” Gian Batista said. “Anybody on the team can go off at any minute. We just try and stay positive every second of the game, throughout the whole 40 minutes. We just fight through all the negative things that come to us, and just keep fighting for 40 minutes.”

Lehman head coach Steve Schulman admitted he had a little agita coming into the game despite Evers’ dismal 5-12 record.

“We had to get this game,” the coach said. “In our conference, if you get blown out in your (previous) game, that means you’re getting that team’s best game. Medgar Evers got blown out in their last game (a 101-74 loss to Hunter). That first half was maybe their best first half all season, and we didn’t really respond that well. But in the second half, we did.”

Schulman pointed to Idrissou’s breakout performance as something the Lightning will need if their hopes of capturing their first CUNYAC title since 2004 are to be realized.

There are just six league games remaining on Lehman’s schedule with only two of those at home. So it was crucial for the Lightning to grab this home win as it sits just one game behind first-place John Jay in the CUNYAC standings.

And as for winning that elusive CUNYAC title, could this be the year Lehman gets to hang a long overdue championship banner at The Apex?

“Oh, definitely,” Gian Batista said. “We have a lot of guys on this team who can contribute to the game, so we have faith in our team and coaching staff that we can go really far this year.”