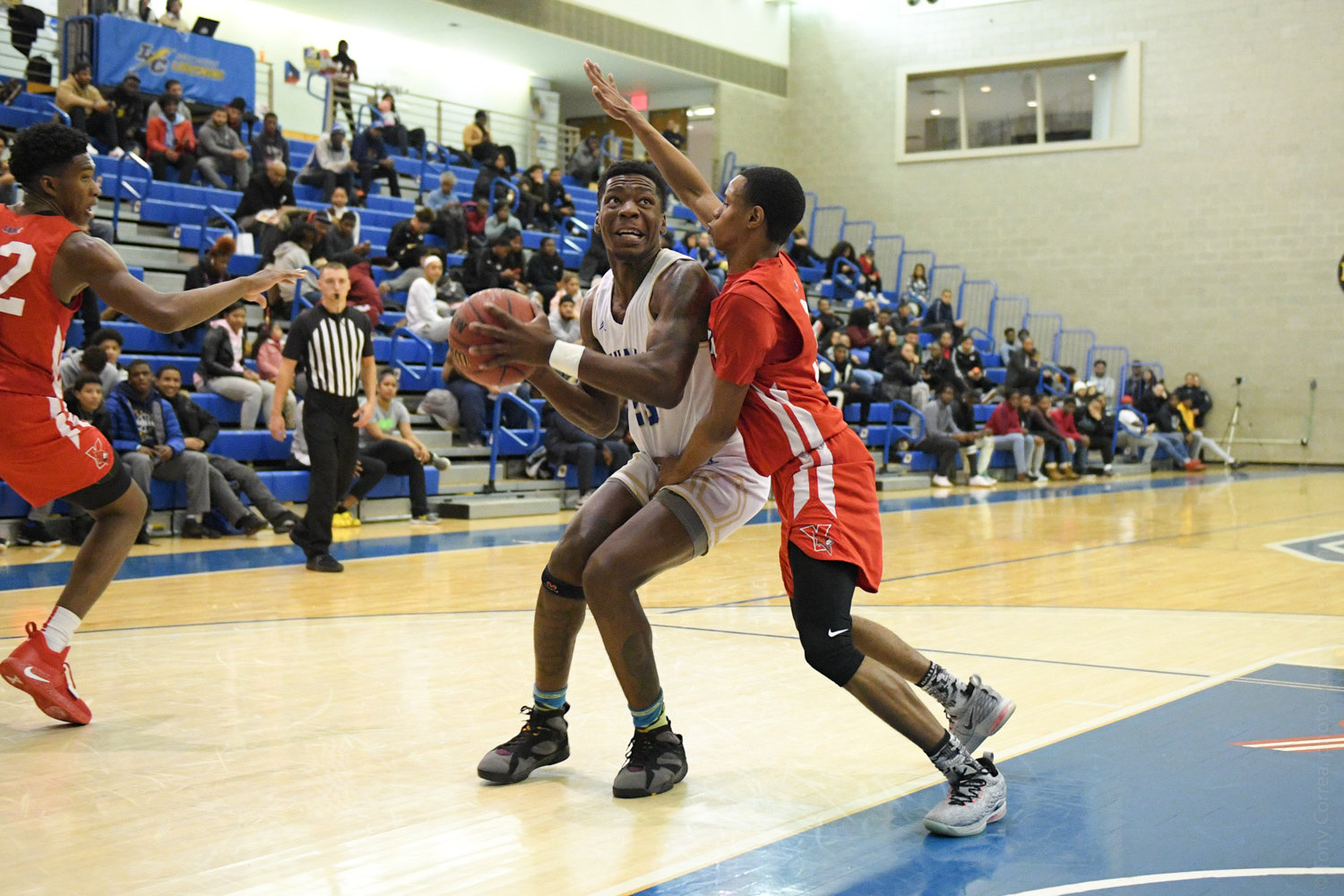 Lehman junior Isaiah Geathers put on a clinic last weekend posting a combined 45 points and 19 rebounds as the Lightning knocked off St. Joe’s of Long Island and Vassar to capture the Coaches vs. Cancer Tournament title.
Courtesy of Lehman College 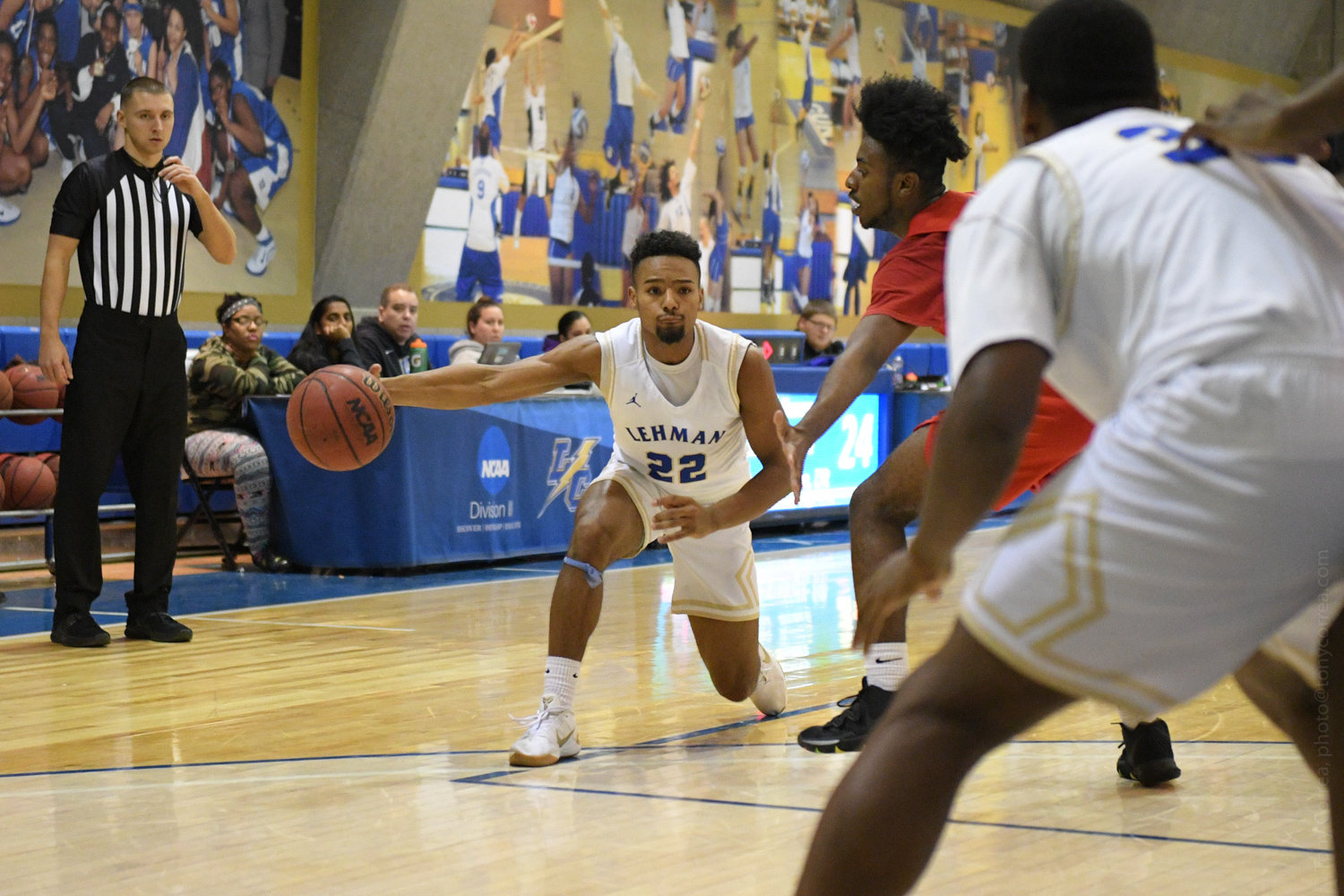 The Lightning began the month losing its CUNY Athletic Conference opener to John Jay, saw starting point guard Will Feldman go down with an ankle injury that night, and with a 1-5 record, the season could have spiraled out of control.

But surprisingly, pretty much everything has gone the Lightning’s way since that night as they have reeled off five straight wins, saw the blossoming of junior guard Gian Batista, and this past weekend captured the Coaches vs. Cancer Tournament title for the first time since 2014.

“After the John Jay game, I said I thought we were a pretty good team, but we just needed to get a win for our confidence,” Lehman head coach Steve Schulman said. “We were playing a tough schedule. We had to play Purchase on the road, St. Joe’s of Brooklyn on the road, and Rowan on the road. But then we finally got some home games and things turned around.”

What followed the John Jay loss were wins over York, Mount Saint Mary’s and Sarah Lawrence before this past weekend’s tournament which saw the Lightning knock off St. Joseph’s of Long Island 82-66 in the semifinals before claiming the title with a convincing 94-68 victory over Vassar on Sunday. That confidence Schulman was looking for is no longer a problem for the Lightning.

“We just needed one win to give us some confidence,” Schulman said. “Now we have that confidence, and we’re playing pretty well.”

And no one was better than Isaiah Geathers this past weekend as the junior guard lit up St. Joseph’s for 17 points and 12 rebounds before erupting for 28 points in the championship game win over Vassar to claim tourney MVP honors.

It was a nice tune-up for Lehman as it heads back into CUNYAC play beginning this weekend.

“I think talent-wise we’re in the upper half of the league,” Schulman said. “There’s not a lot of experience in the league this year, so I think man-for-man we can play with anybody. But we also haven’t been battle tested on the road yet. So we’re going to play both Medgar Evers and Brooklyn College on the road, and I think that will give us a good feel for how we are.

“I always tell the guys the Brooklyn trips are the hardest.”

More good news for Lehman comes with the return of Feldman, who Schulman expects back for the Medgar Evers game.

“Will probably could have played this weekend, but he wouldn’t have been at 100 percent,” Schulman said. “The doctor said with one more week he would definitely be at 100 percent, so he’ll practice this week, and when we play Medgar Evers, he’ll play in that game.”

One of the players who came up big in Feldman’s absence was Gian Batista, who is averaging a team-best 18.5 points a game.

“We knew he was really good, and he’s just getting better each game,” Schulman said. “He’s a coachable kid. He really listens and he just got his grades back and he has a 3.5 (GPA). He’s the real deal.”

Hosting the annual Coaches vs. Cancer Tournament is something special on Lehman’s calendar, Schulman said. It not only raises money for a worthy cause, but it’s also a time when old friends and family gather at Lehman.

“The thing that we really like about it is that on Saturday we had a really big crowd and there were about 12 or 13 of my former players there,” Schulman said. “And then (on Sunday) my whole family was there. And that happens with all the players, their families come to the games to see them play, too. That’s what makes it so special.”

With the non-conference season now virtually over — except for two non-league games against Staten Island — the Lightning’s focus turns to a critical month to start 2020 where most of Lehman’s game will find them on the road.

“January is going to be a really difficult month for us,” Schulman said. “We only have three home games the whole month, so we’ll see how we come out of it.

“Six on the road and three at home. We just got to survive it. We just have to make it through, but we’ll be ready to go.”