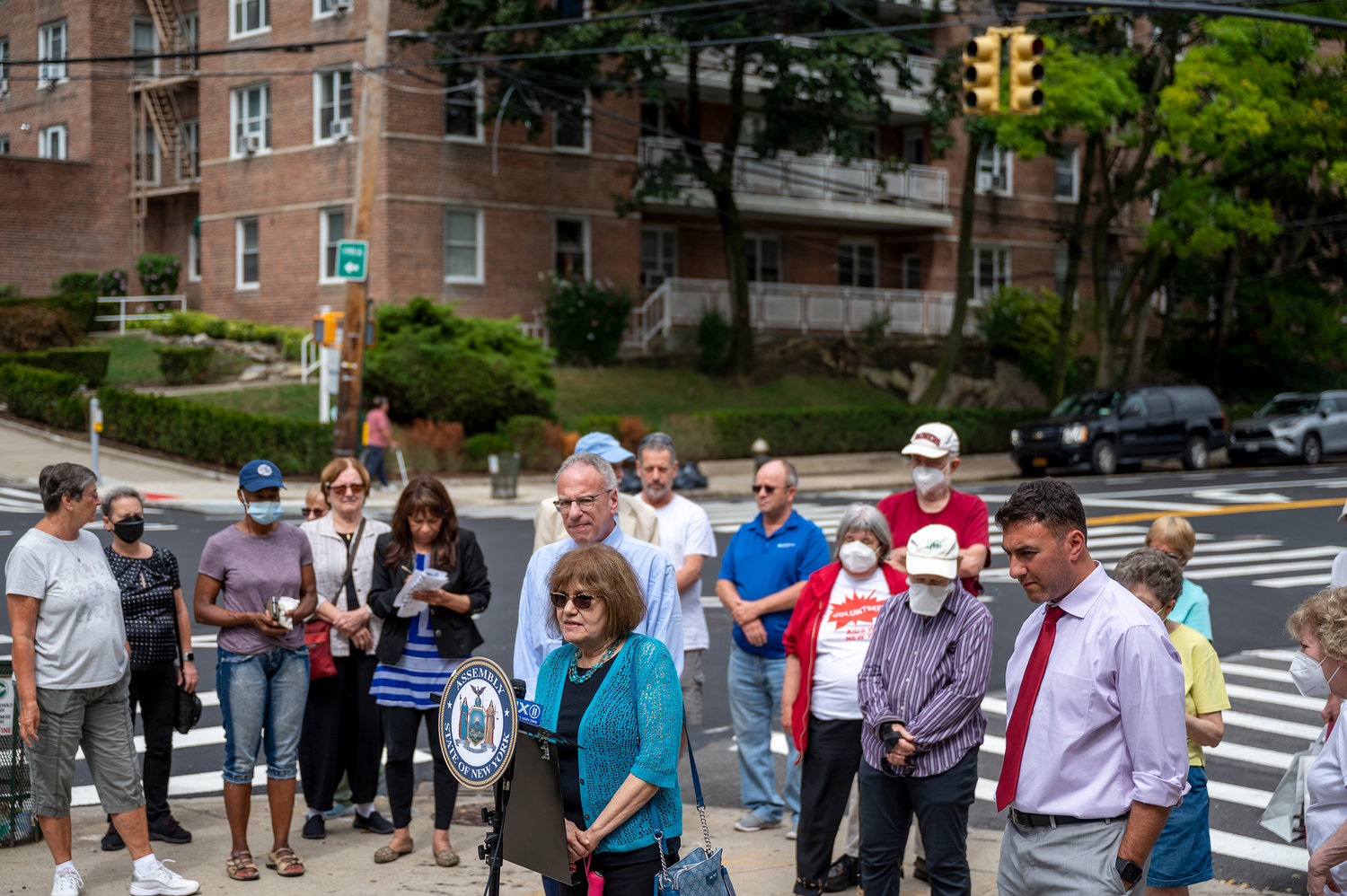 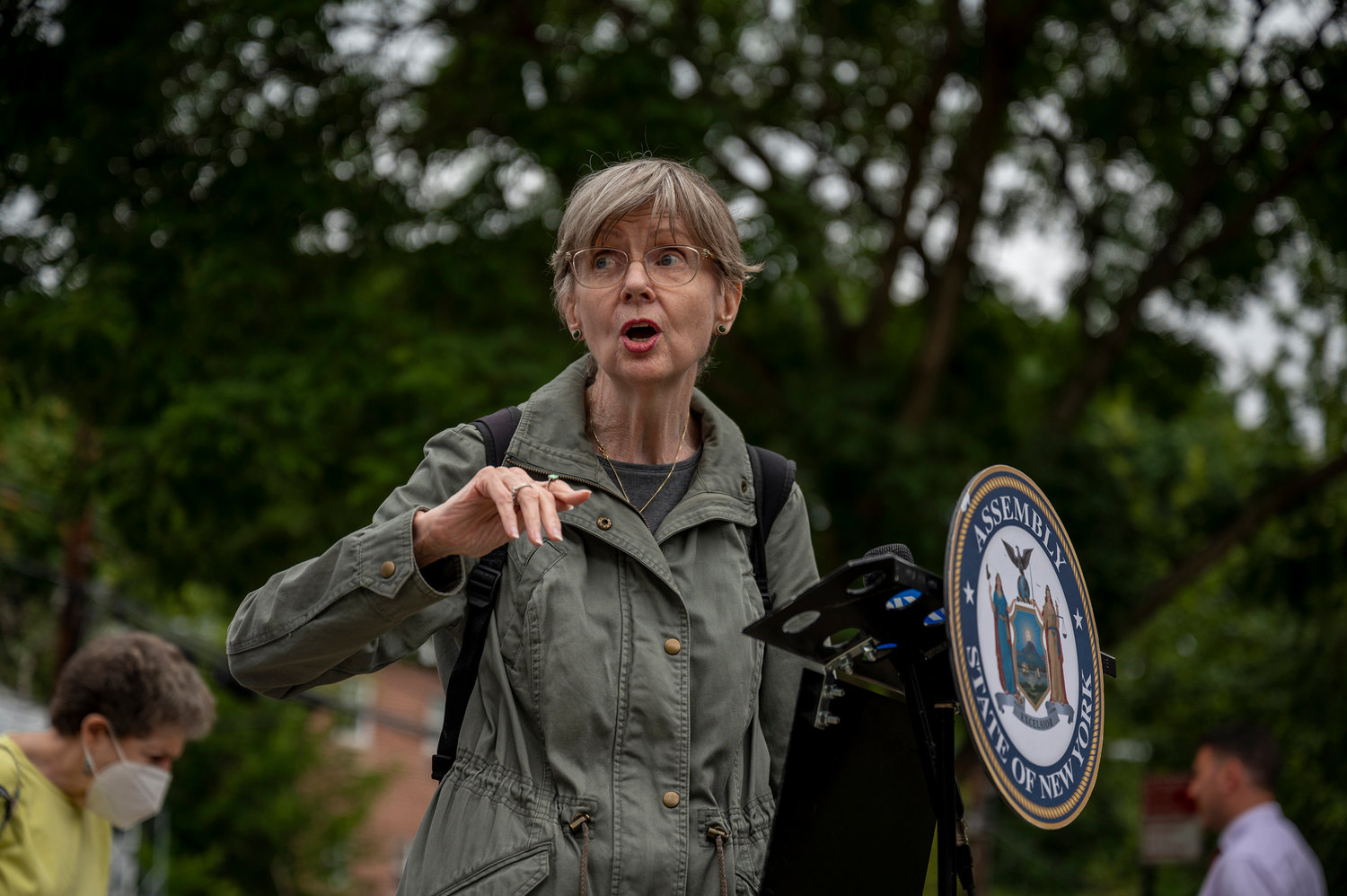 Barbara Connolly, president of Riverdale Avenue Gardens, expressed her concerns regarding the new redesign. Her worry is pollution from cars, as traffic slows, that affects residents who many allegedly have asthma.
Hiram Alejandro Duran 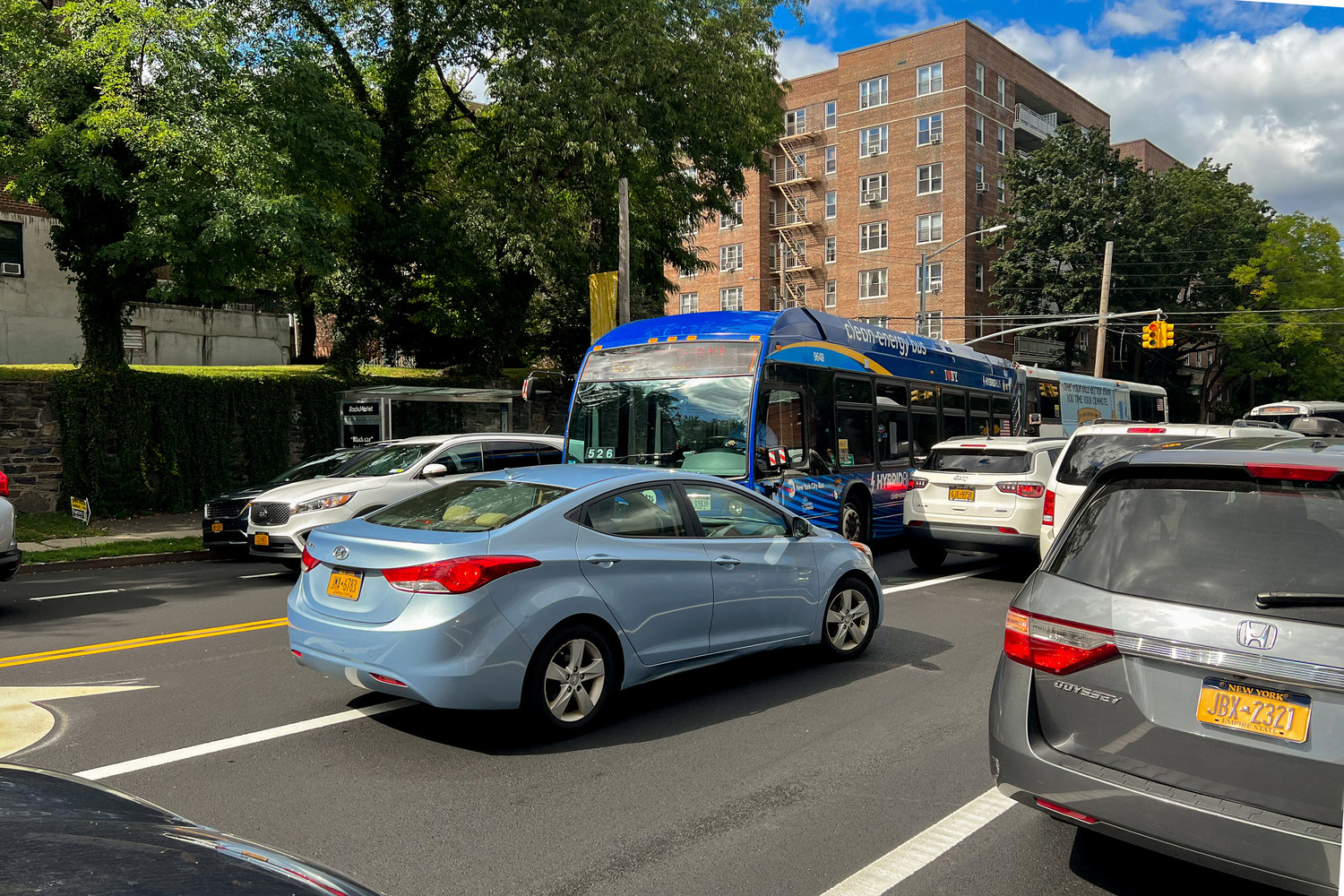 As the first day of school began, Assemblyman Jeffry Dinowitz's fear of congestion became a reality as cars double park north and southbound on Riverdale Avenue. Meanwhile, buses try to weave their way through the thoroughfare.
Stacy Driks
Previous Next
By Stacy Driks

Not to be an “I-told-you-so,” but Assemblyman Jeffrey Dinowitz was. “I hate to say it, but I told you so.”

That was the Assemblyman’s comment made during a video he made during dismissal about the “dangerous” northbound and southbound traffic at P.S. 81 Robert J. Christen on the first day of school Sept. 8.

Dinowitz has fought tooth and nail against the transportation department’s recent completion of the so-called “road diet” plan for Riverdale Avenue.

The Assemblyman and the traffic and transportation committee of Community Board 8 failed to persuade the DOT to change its mind on the project it completed in less than two weeks culminating with the final painting of the street over Labor Day weekend. In response, the Assemblyman set up a press conference on Sept. 7.

The public school appeared to be the most severe case of the traffic problems that Dinowitz had on his plate. He told The Riverdale Press that he wouldn’t be as mad if the project took place further north.

St. Margaret of Cortona School is on West 260th Street has no more than 300 students compared to more than 700 students at P.S. 81.

Theresa Fleming, who lives in Riverdale Park and serves as the board treasurer, sometimes looks out the window that faces Riverdale Avenue with fear. What happens if an emergency vehicle can’t pass through the double-parked cars? she thinks.

“In the morning, it isn’t too bad because parents drop their kids off. But in the afternoon, around two o’clock, they start lining up,” Fleming said. “God forbid there is a fire. Where does the fire truck go?”

For a while now, elected officials and CB8 members who opposed the new redesign warned the DOT that this would force congestion starting as early as 2:30 p.m., which is just before dismissal.

“It has always been like that,” Craig Sachs, a Riverdale resident who is in support of the narrowed lanes. “The buses needed to go around double-parked cars.”

Prior to the coronavirus, P.S. 81 was a congestion magnet during pick-up and drop-off. Yet, specifically at drop-off, parents would double park on the southbound side and even triple park on the north.

During the press conference, ambulances often interrupted Dinowitz and he carefully pointed it out. The Assemblyman used the opportunity to visually express in person that an emergency vehicle was forced to drive on the center median strip or towards southbound traffic.

“I don’t think it’s okay for cars to go on pavement markings or the opposite lane, I sure hope the city doesn’t think its okay,” the Assemblyman said.

According to Councilman Eric Dinowitz, during his conversation with the DOT the agency allegedly said northbound traffic should swerve around the double-parked cars.

“We have been asking for months about collaboration; every single time I met with the DOT I asked have you met with the schools? The councilman said.

The DOT allegedly met with P.S. 81 at the end of the summer, around the time the work on the road was taking place. But the school had little time to prepare a strategic plan for safer pick-ups and drop-offs.

Sachs told The Press that traffic seems to be slowing down as a result of the project.

If cars are encouraged to drive around double-parked cars and onto the median, it can cause a jam when someone needs to make a left-hand turn, some residents said.

“He (Jeffrey) has a valid point about turning signals,” Sachs said.

The Assemblyman has been pushing for left-turning signals for a while now and feels discouraged that the agency is ignoring his ideas.

However, since this project has been completed, the department’s chances of changing the road are quite slim.

Despite his best efforts to prevent double parking, he was attacked on Twitter the following day of the press conference regarding his comment about sitting behind a bus.

There are several lines: Bx7; Bx10; BxM1 and BxM2 that includes the Rail Link service. The Assemblyman defends himself, claiming that it is perfectly normal not to want to sit behind the smell of diesel. He says if there were two lanes of traffic, he would drive around the bus to avoid the smell.

Riverdale Gardens president Barbara Connolly was concerned about diesel and automobile gasoline pollution. During the winter, during a pick-up, parents don’t wait outside like they usually would in the warm weather.

Parents would be inside their vehicles, with the heat turned on unaware that residents of Riverdale Garden can smell the fumes.

It is city law by the environmental protection department that a person should not idle their car for more than three minutes while parking, standing or stopping.

In addition to this code, there is another law that steps over it as the location. The three-minute rule is reduced to one minute around public and private schools.

People couldn’t help but realize the bus pads on West 256th to West 263rd, which were not touched during the work.

In an email conversation between Keith Kalb, the interim Bronx borough commissioner to the transportation department, and the Assemblyman’s office, Kalb ensured that the bus pads work eventually would be completed.

Since the project began, one accident caught everyone’s attention. People began to question if it was the new fresh redesign was painted days prior. But this time, it was not.

A woman was making a right-hand turn and lost control of her vehicle. It is in no connection to the road diet, officials and residents said.

There will still be a CB8 traffic and transportation meeting on Sept. 15 at 7 p.m. located at St. Margaret of Cortona School. There, residents will have the opportunity to provide feedback on the redesign.