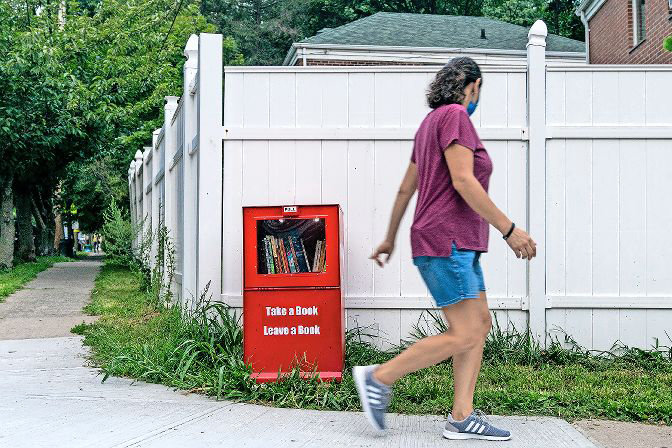 Home from college during the coronavirus pandemic, Daniella Needleman and Eliana Padwa came up with an idea: Installing a free library in Riverdale, so their neighbors could find new books even when the New York Public Library remained closed.
HIRAM ALEJANDRO DURÁN 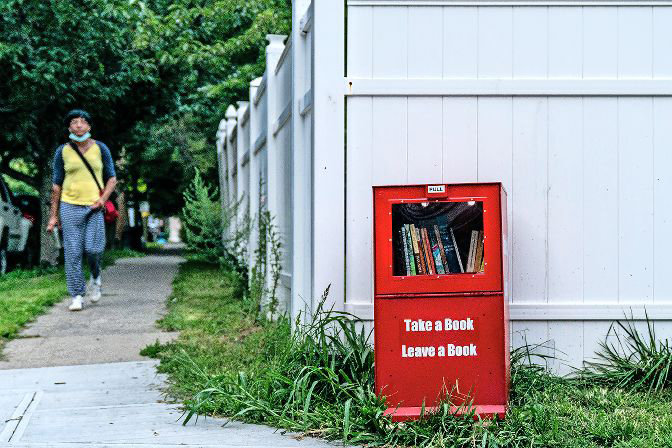 Sitting on the corner of West 256th Street and Mosholu Avenue, Riverdale’s newest library doesn’t require a card or even a trip inside. Passers-by are invited to take and leave books as they please, and can even keep a book they particularly like.
HIRAM ALEJANDRO DURÁN

Libraries are reopening for grab-and-go service, but Daniella Needleman and Eliana Padwa were ahead of the curve, using donations to purchase and set up a little free library across the street from the then-shuttered Riverdale Library.
HIRAM ALEJANDRO DURÁN 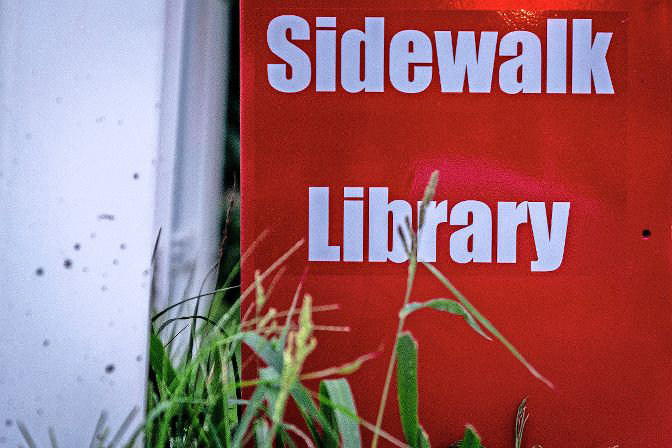 The sudden end of in-person college classes meant Eliana Padwa and Daniella Needleman were bored, and alleviated that by looking to help out their hometown. Missing the library, Needleman had an idea: Raising money for and install a sidewalk library for readers to visit.
HIRAM ALEJANDRO DURÁN 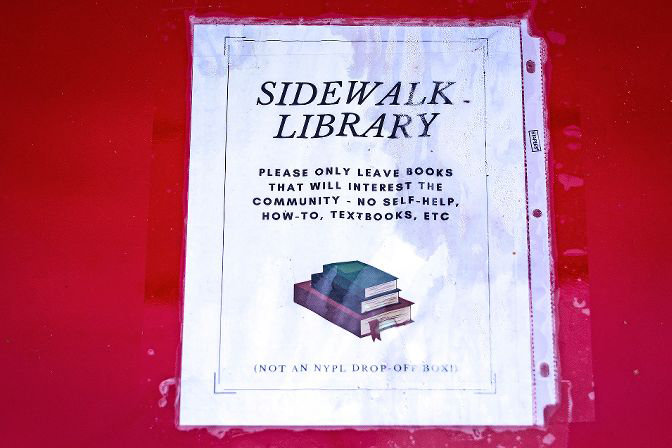 Anyone can take and leave books from Riverdale’s new sidewalk library, but organizer Daniella Needleman has some restrictions: Leave only fiction or good nonfiction, and keep your textbooks and self-help books at home.
HIRAM ALEJANDRO DURÁN
Previous Next
By KIRSTYN BRENDLEN

As the country searched to get a handle on the coronavirus pandemic, college towns emptied out as students were sent home in an effort to avoid further outbreak.

But as the dorms at Lehman College, Manhattan College, and the College of Mount Saint Vincent were vacated, childhood bedrooms were becoming reacquainted with their now-older occupants, many wondering if life would ever return to normal.

One of those students was Daniella Needleman, a behavioral biology major whose sophomore year at Johns Hopkins University was interrupted by the pandemic. Returning to Riverdale, Needleman found herself without much to do. Sure, there were online classes, but without on-campus meetings, dinners with friends, and extracurriculars, she had a whole lot more time on her hands.

That issue was compounded by the city shutdown. About the same time schools shuttered, so did everything else, and guidelines about what was safe were changing every day. But if there was just one thing Needleman wished she could do through all that, it was to simply head out to the library and pick up something new to read.

That was out of the question, though. While branches of the New York Public Library dot local neighborhoods like Kingsbridge, Spuyten Duyvil, Van Cortlandt Park and Riverdale, they were all closed. Sure, the Kingsbridge Library has reopened for grab-and-go materials, but others are just now starting to follow suit.

“I used to read a book a week, at least,” said Needleman, who took a liking to book series led by famous literary characters like Harry Potter and Percy Jackson.

“I would always get it from the library, because if I didn’t like it, I didn’t have to own it. I could just get it and return it.”

But it wasn’t simply showing up, grabbing books and leaving for Needleman. “I also just liked sitting in the library and reading.”

With that now impossible, Needleman wasn’t sure what to do — until she took a trip to Bristol, Rhode Island, finding the community filled with small newspaper box-like kiosks known as Little Free Libraries. Many were constructed as Boy Scout projects or just by book lovers, but for each the concept was the same — leave a few books for neighbors, and they’ll do the same for you.

That allowed many to find their next read, all within walking distance of home and without a library card.

It was then Needleman decided: One of those little boxes would be right at home in Riverdale.

“I was thinking about having it on a public space,” she said, “but I knew it would take a lot of time to have it approved by the city.”

A successful Little Free Library is all about location, and soon Needleman realized she had just the piece of real estate she needed. Needleman’s friend, Eliana Padwa, happened to live just across Mosholu Avenue from the Riverdale Library. Her front lawn would be perfect, providing a public good on private property.

With the location secured, Needleman and Padwa then set out in search of a suitable container to protect books from the elements. Many of them are nothing more than small enclosed wooden boxes on posts anchored into the ground. But that would take more time than they had.

Instead, the two settled on a converted newspaper box — bright red with a little plastic window in front.

Such a box wasn’t free, however. In fact, it cost nearly $400 — money Needleman raised on Facebook. It was an effort met with comments and posts of support.

“It was really positive,” Needleman said. “I think everyone really liked the idea. I got the donations really quickly. A lot of people were saying they wished they had had this, and that they were thinking about it.”

Two weeks later, the box was carefully installed on Padwa’s front lawn facing the Riverdale library. It was stocked with some children’s books left over from Padwa’s childhood along with some her parents had enjoyed but didn’t need anymore.

Within a few days, neighbors filled the rest of the shelves.

“It was also pretty fun to organize it, and hear the response from the community,” Needleman said. “But I also ended up raising a lot more money than I needed, so I’m planning to try to get a second one approved for a public space in a different part of Riverdale.”

It was nice to have a meaningful project to do while she was home, Needleman said — not just to fill her own time, but to do something nice for her neighbors. As the box fills with some new favorite books, Needleman hopes area children make new memories of walking to the library box during a time when their regular neighborhood library couldn’t open its doors.

“It was nice to feel like I was making a little difference and doing something that brought a little more positivity to the community,” Needleman said. “Because I think it’s a really hard time for everyone.”