Looking for just the right thing to say over the holidays 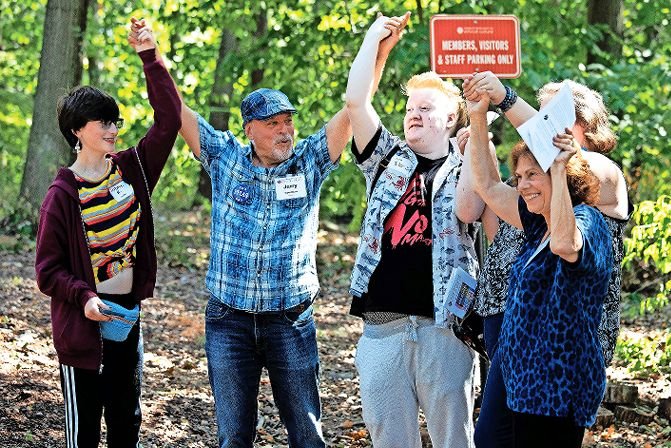 Jerry Goodman, second from left, and wife Mimi Goodman on the far right, have worked hard to bring better understanding and acceptance of the LGBTQ community into this part of the Bronx. They continued that with a seminar sharing the best ways to interact with LGBTQ family members and friends over the holidays.
HIRAM ALEJANDRO DURÁN / File 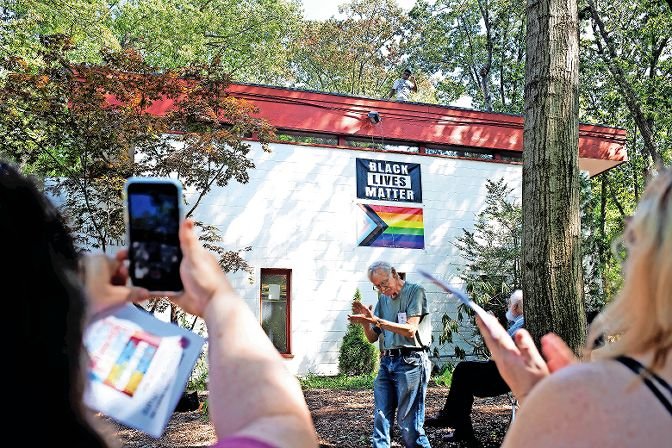 The Riverdale-Yonkers Society for Ethical Culture proved how diverse its beliefs were last year when it unveiled flags of support not just for the Black Lives Matter movement, but also for the LGBTQ community. But openness doesn’t come easy, and one speaker shares the best ways to interact with LGBTQ family members and friends over the holidays.
HIRAM ALEJANDRO DURÁN / File 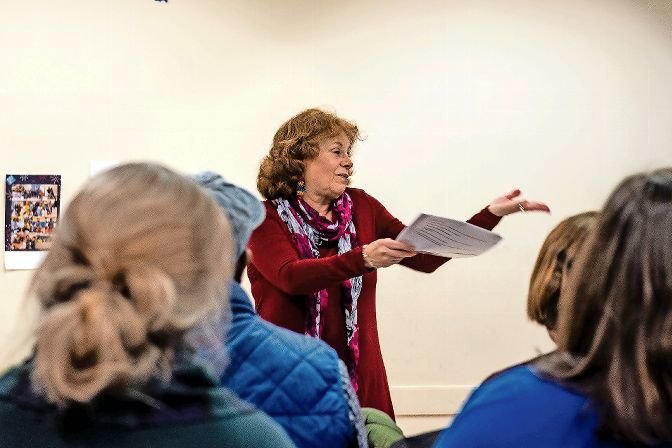 Mimi Goodman knows what it’s like to face new situations with familiar faces around the holidays — especially after a child comes out as part of the LGBTQ community. But what are good things to talk about with someone from the LGBTQ community? What should be avoided? Mimi and husband Jerry had some of the answers.
NOAH BENUS / File
Previous Next
By MICHAEL HINMAN

We’ve all been there. Holiday dinner with the extended family, and one member you’re just not the most comfortable interacting with.

Not that you have any issue with that person. It’s just that you’re overcome with fear: Fear of saying the wrong thing.

That happens a lot, especially when it comes to the LGBTQ community. Jerry and Mimi Goodman know that first hand. More than two decades ago, their daughter came out to them. Not long after, their son said he, too, was gay.

Of course, their children were the same daughter and son they raised — but how would the conversations have to change?

They don’t, says Eva Dolgin. She is the youth pride initiative program director at CANDLE in New City — the Community Awareness Network for a Drug-free Life and Environment. While getting to know someone who is gay, lesbian, even queer or transgender may form a lot of questions that must be asked, it’s also important to remember that while sexuality and gender expression are important aspects of who people are, it’s not the only thing that defines them.

“What we need to do is honor where folks are and what they share with us,” said Dolgin, who uses the she/they pronouns. “Language is a tool that we use to describe who we are in our world.”

Dolgin joined a recent online discussion hosted by the Goodmans and their group, Bronx Parents of Pride. Created last year, Parents of Pride is exactly as its name sounds: A support and advocacy group for parents, family, friends and allies of those in the extended LGBTQ community.

While normal times would have had Dolgin visit the group’s home at the Riverdale-Yonkers Society for Ethical Culture meeting house in Fieldston, the coronavirus moved it into a Zoom discussion instead.

Then again, the internet has become a great place to help open doors within the community that might not have opened well in the past, Dolgin said. That’s especially true for those who identify as transgender and gender-queer.

It seems every day someone publicly joins that community — most recently “Umbrella Academy” actor Elliot Page.

For those new to seeing such a public face on this part of the community, questions certainly abound, Dolgin said. But knowing what to ask — and when, if ever — is important.

“I ask you a question, you answer it. You ask me a question, or we start reminiscing, right?” she said. “I want you to have questions, I want you to remain curious and open. That doesn’t necessarily mean I want you feeling like you can ask any question.”

People who are genuinely curious about someone, especially in the transgender community, might feel that asking questions is a way to express that curiosity and support, Dolgin said. Yet many times, those questions become overly personal and outright inappropriate.

One way to think about whether a question is appropriate or not is if you would ask it of any other person, especially one who identifies as heterosexual. Would you be comfortable asking them questions about their anatomy, for example, or have them ask detailed questions about yours?

“I don’t mean stop asking questions entirely,” Dolgin said. “I just want you to be able to recognize the pause.”

The best questions? What’s going on right now? What are you proud of? Anything new? Have you read something fun?

“Like all the stuff we talk to everyone in our lives about, especially in pandemic land,” Dolgin said. “I have lots of conversations about how I ‘need a new show, do you have any suggestions for me?’

“Ask all the things that show someone you’re interested in who they are beyond their gender identity,” Dolgin added. “If all we ask about is somebody’s gender, that’s exhausting. That is one part of who any of us are. And folks want the rest of who they are to be honored and seen and cared about, too.”

And most important? If someone has asked you to call them by a particular name, or using specific pronouns: honor it, Dolgin said. Even if you’re not used to it. It’s the best way to show love and support, and keep the holidays joyous.