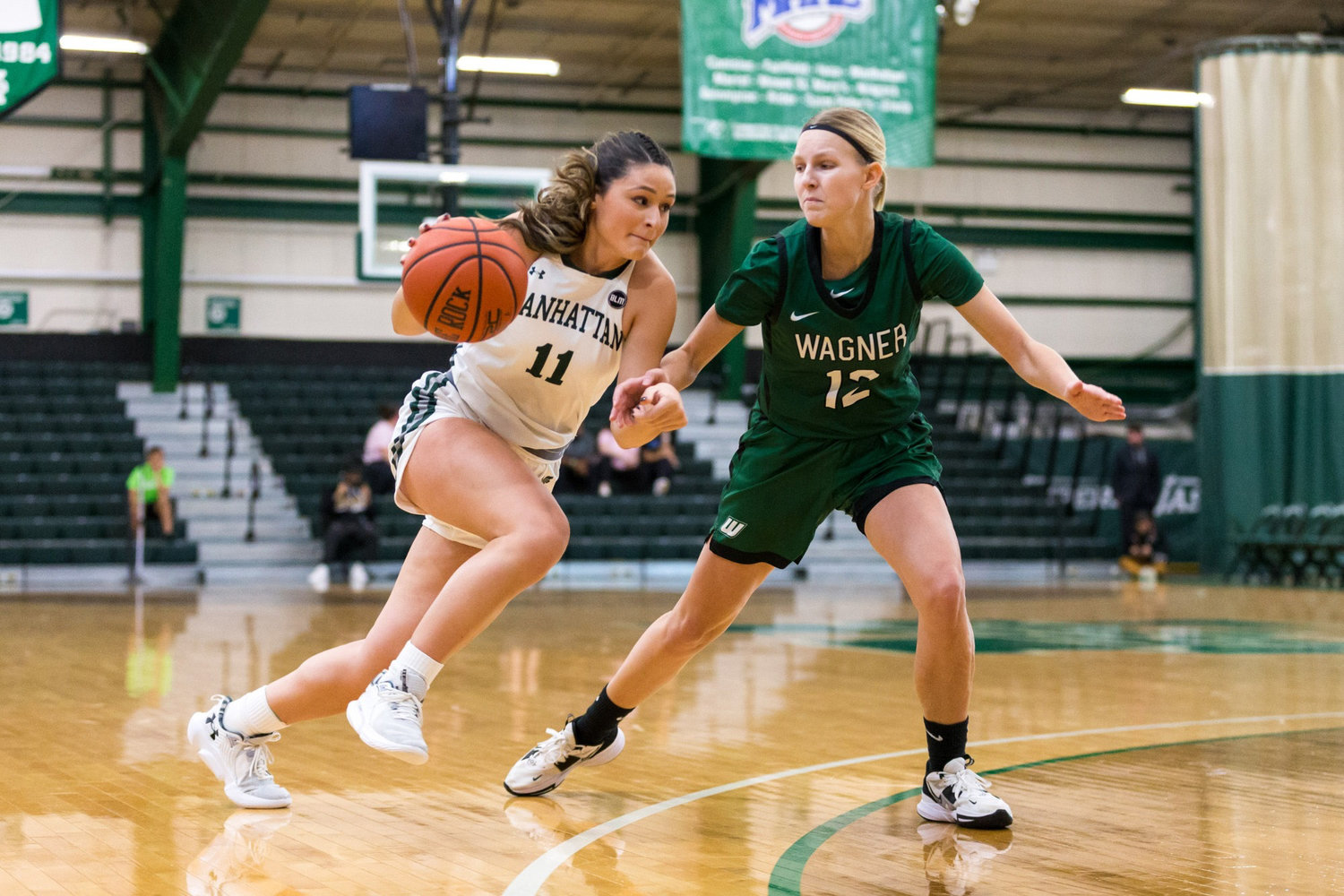 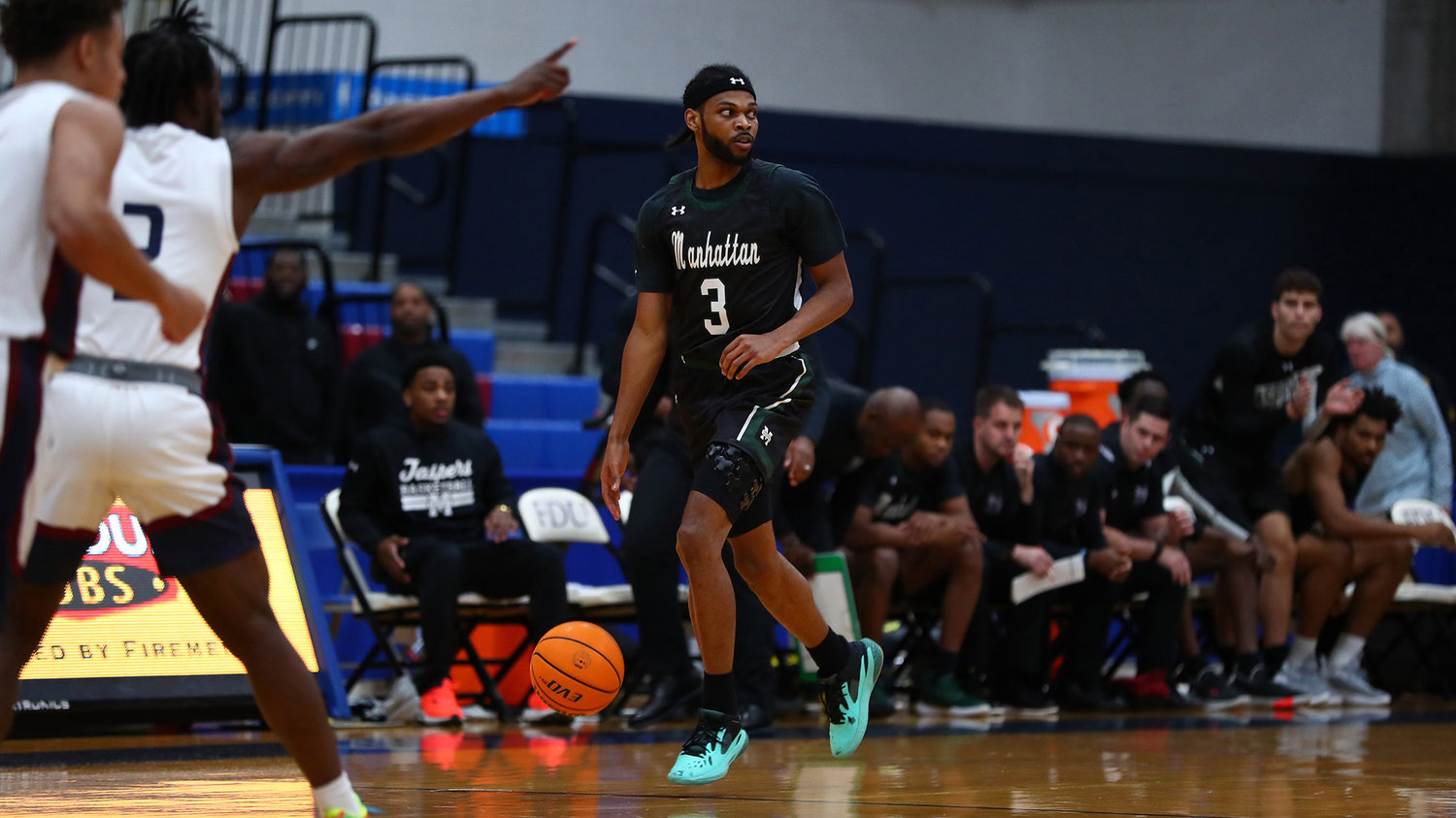 Ant Nelson of Manhattan College looks for a teammate to pass to as he dribbles mid-court in the team’s opening week. The Jaspers are off to an 0-2 start under new coach RaShawn Stores.
Courtesy of Manhattan College athletics department
Previous Next
BY CAROLINE MCCARTHY

Manhattan College basketball is off to a slow start to the 2022-23 season. The women’s team, ranked second in the Metro Atlantic Athletic Conference Coaches’ Preseason poll, fell three times this week to Wagner, Stony Brook, and Duquesne.

The men’s team lost its season opener to Virginia Commonwealth University on Nov. 7. They then lost on the road to Fairleigh Dickinson on Nov. 13 after having to postpone the home-opener against Central Connecticut State University on Friday due to unplayable court conditions during a rainstorm.

The women’s season opener at Wagner was an overtime battle as the Jaspers fell 63-60 in 45 minutes of play. Emily LaPointe scored the first basket of the season for the Jaspers and finished the game as the leading scorer with 18 points. MAAC Preseason Player of the Year Dee Dee Davis was right behind her with 17 and Leyla Ozturk followed suit with 9.

In the first few seconds of overtime, the Seahawks’ Lina Loconeice gave Wagner the lead with a three-pointer. They controlled the lead until 1:48 when LaPointe scored two free throws, tying the score at 60. Wagner scored on a fast-break layup, and a missed lay-up by Davis gave the Seahawks a last-second shot on the line, to nail down the win.

Davis was the Jaspers’ MVP at Duquesne despite the 67-46 loss. At the end of the first quarter, the Jaspers were down 22-11 — Davis scored all 11 of the Jaspers points. She finished the game with her first ever collegiate double-double, scoring 28 points and 11 rebounds in just 37 minutes.

At Virginia Commonwealth University, the men’s team outshot VCU from the field, 3-point range, and free-throw line, but still fell 73-56 in their season opener.

“It was great to be back out there with our young men and start our process and journey,” said interim head-coach RaShawn Stores. “As long as we continue to grow day-by-day and game-to-game, that is all that matters. I was proud of how we stayed together after the adversity over the last two weeks.”

This was Stores’ first game as head-coach for the Jaspers after former coach Masiello was let-go two weeks before the start of the season.

Lead scorers in the game were Elijah Buchanan with 16 points, and Josh Roberts with 14.

On Friday night at Draddy Gymnasium, fans packed the stands for the men’s home opener. However, while spirited squads and announcers getting ready to for the Jaspers’ fight song, the public address announced said the game would be postponed due to playing conditions on the court.

Riverdale received almost an inch of rain on Friday night, causing humidity to build up in the gymnasium and condensate on the court. Allegedly, the fans that prevent such condensation were not turned on early enough to compensate for the rainfall.

“Due to unplayable court conditions and a concern for student-athletes safety, both schools decided to postpone the game tonight tentatively, we’ll announce at a later date when the makeup is,” said Phil Paquette, assistant athletic director at Manhattan.

One Jasper fan described the event as “embarassing” after the events of the past few weeks.

“After the last few weeks this is just terrible,” he said. “It’s like a third-world country.”

In a close-game against Fairleigh Dickinson, Manhattan fell by three with a final score of 77-74. Ansley Almonor earned double figures for the Knights with 22 points. Grant Singleton followed closely behind with 20 of his own.

Five Jaspers finished in double-digits. Roberts led the Jaspers with 17 points, with Buchanan close behind with 16. Ant Nelson and Nick Brennan scored 13 and 12 points respectively, and Marques Watson finished with 10.

The men’s team returns to Draddy Gymasium on Nov. 18. The women will play on Nov. 19.