Making something simple as eating possible again for some 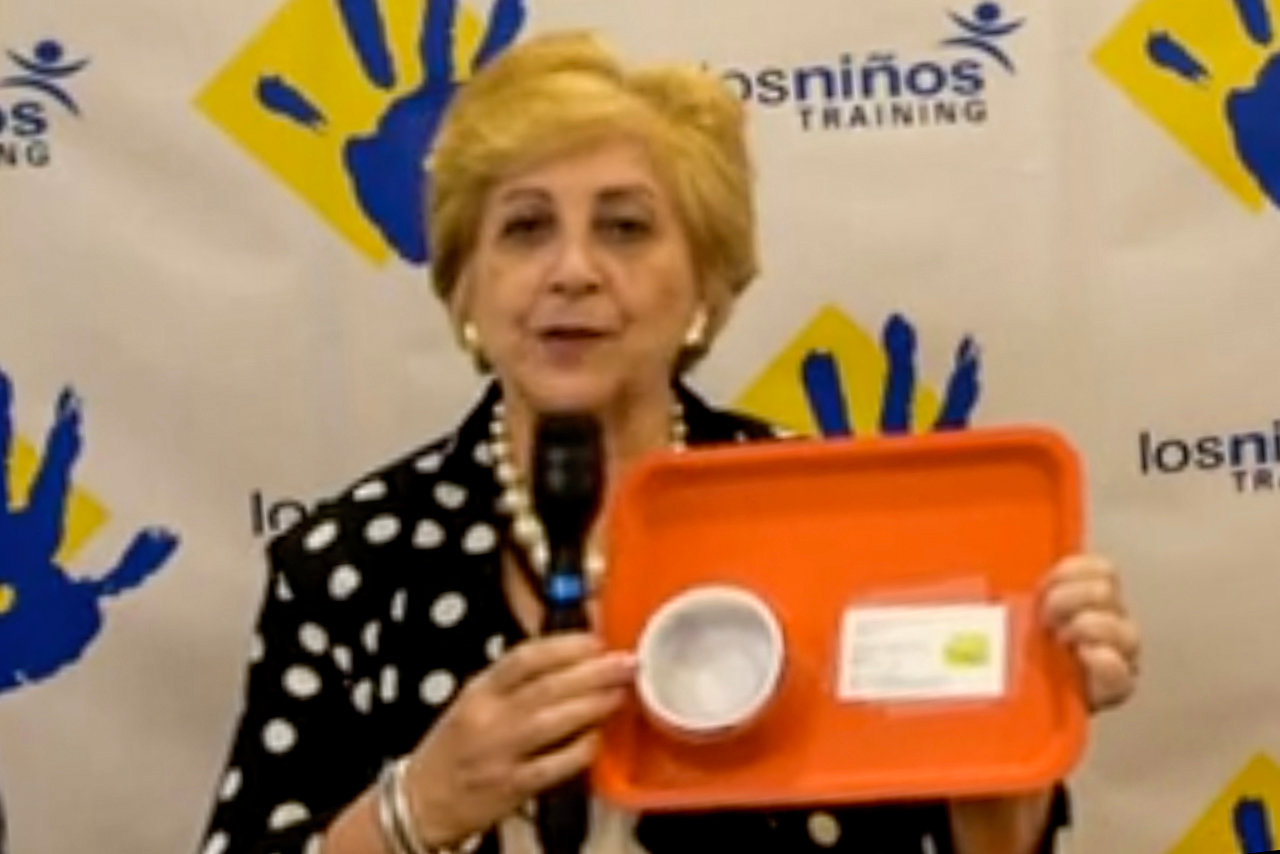 Ilana Herman plans to release a children’s model of her invention, the independent feeding tray. But first, the adult version needs to get established in the health care market. The inspiration for the concept came from Ilana’s 40 years experience working as a speech pathologist with senior citizens. Seeing her clients struggle to eat independently prompted her to develop the tray.
Courtesy of Ilana Herman 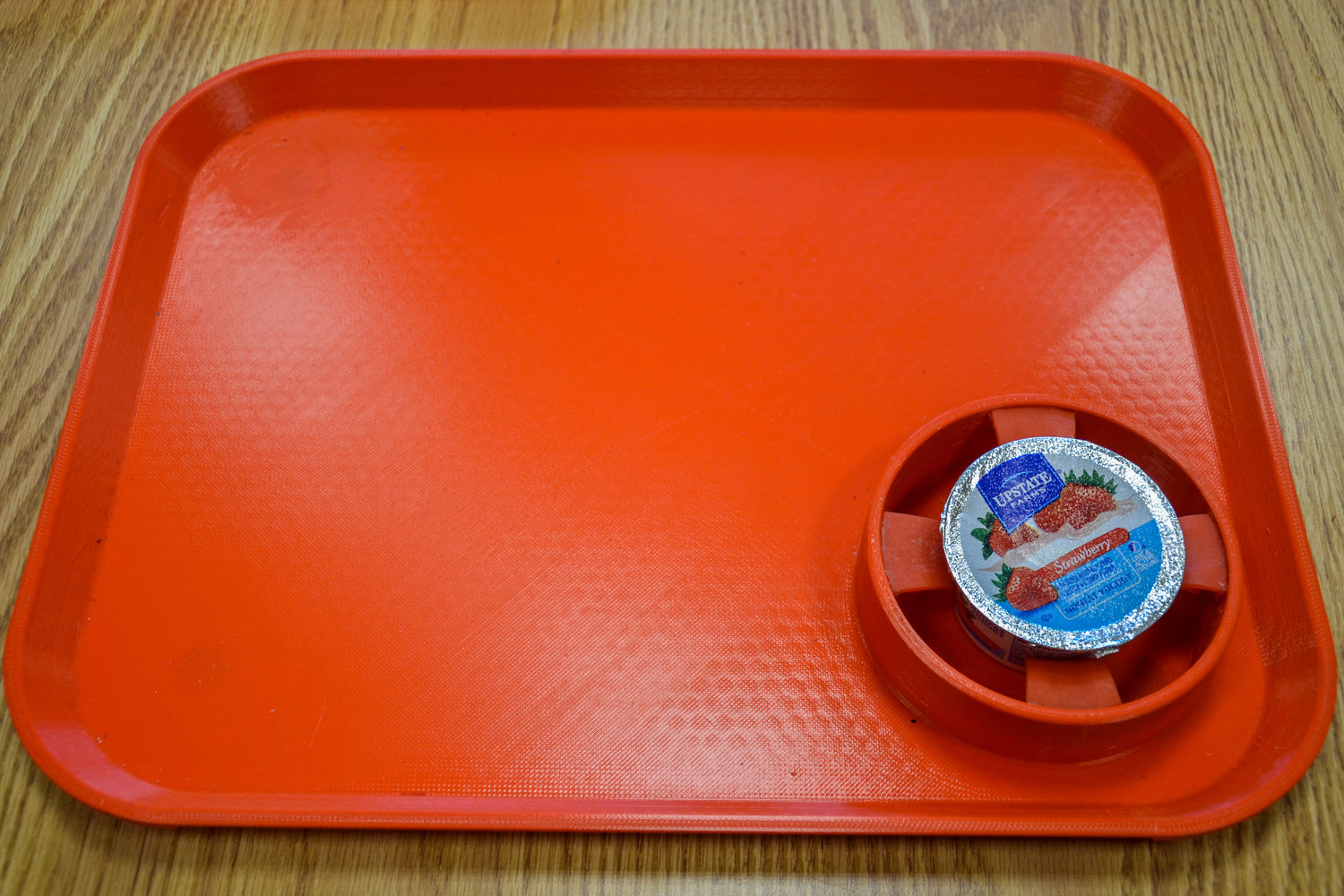 Designed by speech pathologist Ilana Herman, the independent feeding tray features four flaps attached to a molded cup and is meant to help those struggling with neurological and orthopedic injuries eat independently. The tray is still in development. .
Courtesy of Ilana Herman 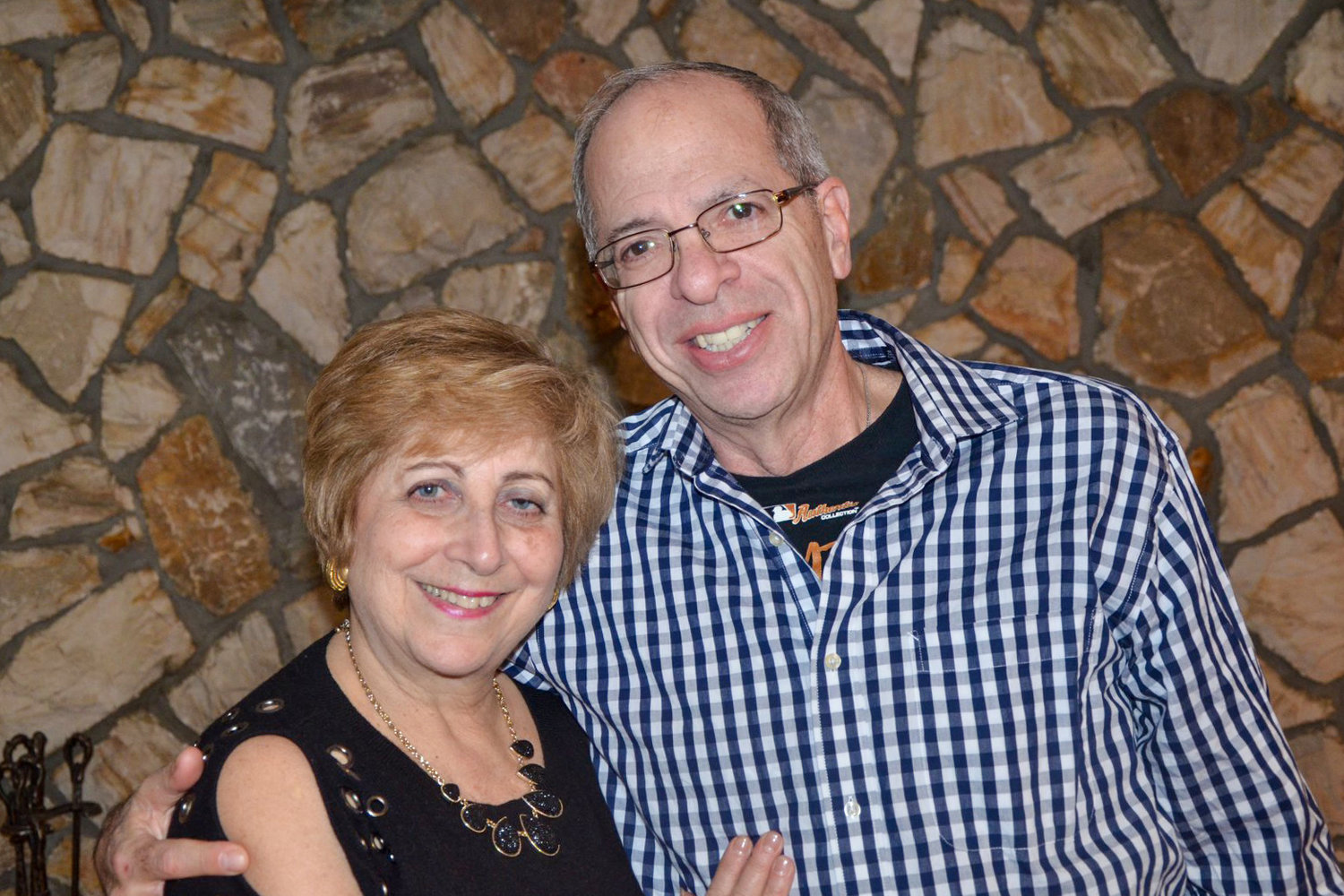 Isaiah and Ilana Herman have lived in Riverdale for the past 42 years, and it’s where Ilana developed what she calls the independent feeding tray. It’s the result of more than four decades in the health care industry. Isaiah took a different route career-wise, working as a business consultant before taking on a role overseeing the business dealings for Ilana’s tray.
Courtesy of Ilana Herman 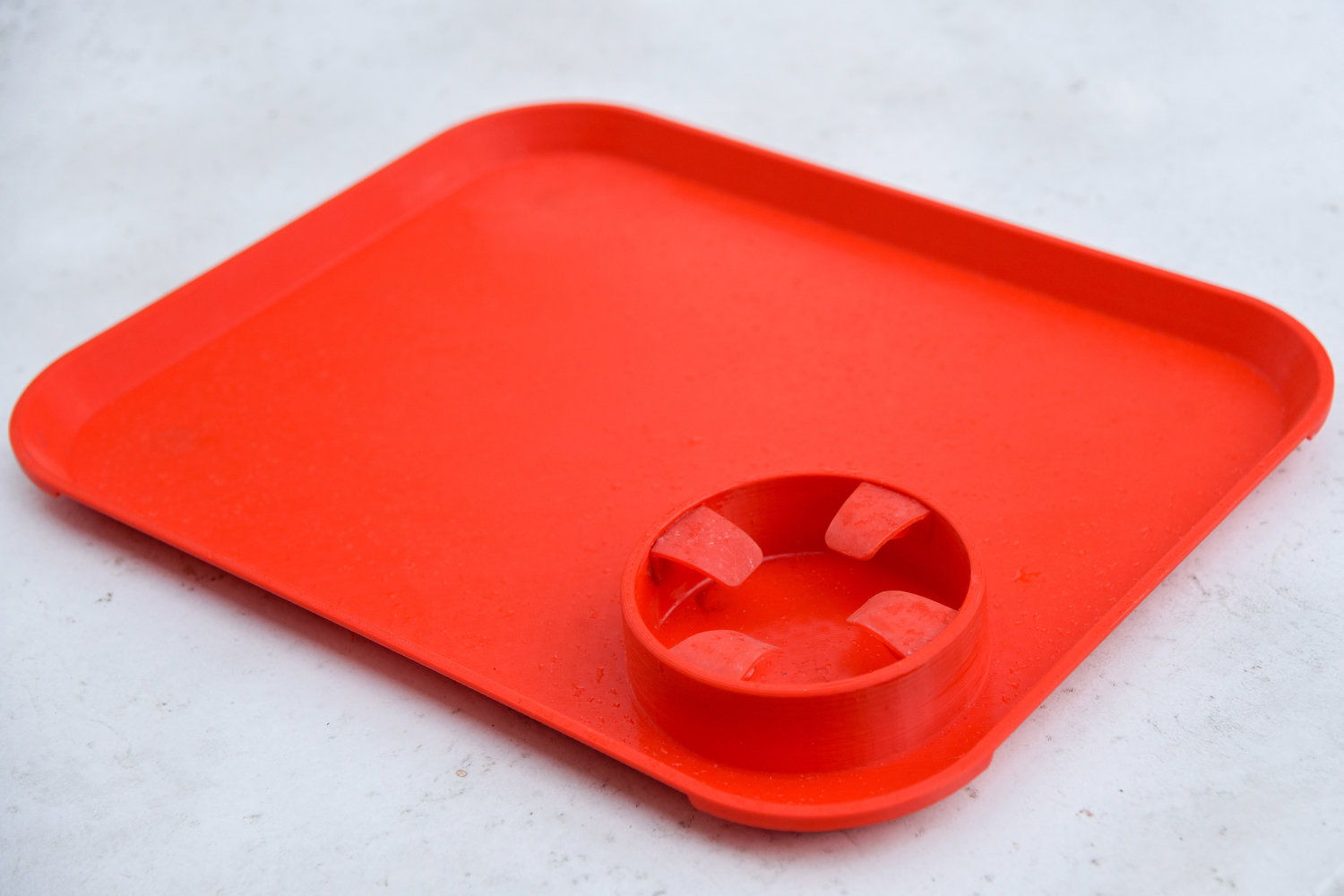 The independent feeding tray prototype features a molded cup with four flaps, intended to help stabilize the tray for those suffering from neurological conditions.
Courtesy of Aaron Herman 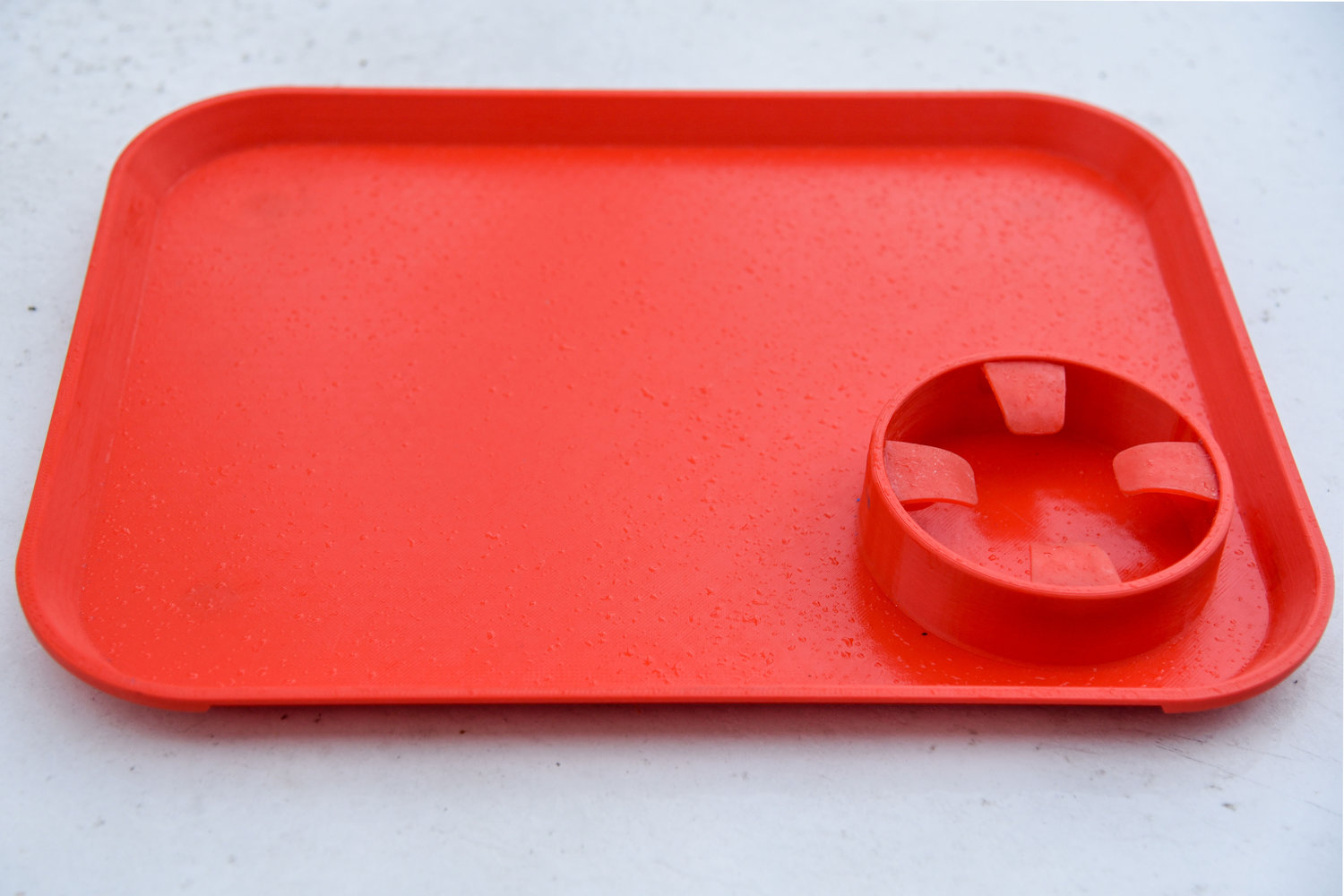 Ilana Herman’s independent feeding tray originated as a simple design with the potential to change the lives of those with neurological disorders or orthopedic injuries.
Courtesy of Aaron Herman
Previous Next
By PETE JANNY

The coronavirus has upended the lives of many people around the world. But even during such gloomy days, there are plenty of good deeds and intentions to rise above those struggles.

One couple in particular is trying to do their part to not just make days better, but meals, too, for those suffering from neurological disorders and orthopedic issues.

Isaiah and Ilana Herman have taken great pride in calling Riverdale home for the past 42 years. It was here they raised two sons — Aaron and Josh — and led successful careers, both in health care and the business world. But in a quest to make their own mark on the world, the Hermans have developed a tray they say could be a game changer for those who struggle to eat meals by themselves otherwise.

They call it the independent feeding tray, a product Ilana was inspired to create because of her patients.

The Washington Heights native has made her living as a speech pathologist, first for the Hebrew Home at Riverdale, and later for United Hebrew of New Rochelle. Ilana has a wide range of experience working with patients with neurological injuries — such as a stroke or Parkinson’s disease — as well as orthopedic problems, such as bone dislocations or fractures. The sight of watching her patients struggle to eat was especially heartbreaking.

“I would be so frustrated when they tried to eat,” Ilana said. “I had many patients say to me, ‘I can’t do this with one hand.’ The dessert is sitting there, and the patient has to feed themselves.”

It was enough to inspire Ilana to create her independent feeding tray. At first glance, it looks like any other standard tray someone might find in a cafeteria, but this one is different — beginning with a cup molded into the tray itself. The cup’s interior includes four flaps built from thermoplastic elastomers meant to hold a food cup in a stable enough position to enable patients with a debilitated arm to eat independently.

“The whole purpose of this innovative technology is to allow patients to maintain dignity and independence when eating,” Ilana shared in a video posted on her company’s website.

Isaiah is the business strategist working behind the scenes generating interest in the tray among those in the health care industry. His wife’s tray isn’t the only thing keeping him busy. He still consults other business, and serves as board president for Kinneret Day School in Spuyten Duyvil.

“I am helping her in the marketing and development areas,” Isaiah said. “We knew it is step by step, and everything takes time. Nothing happens right away.”

The couple’s short-term focus is to raise enough funds — $35,000 to be exact — to get manufacturing under way. While there are many ways of accomplishing that — business loans or venture capital — the Hermans instead decided to use online crowdfunding. So far, raising funds have been slow going — just a little more than $1,100.

The couple are confident they can raise the funds, to the point they’ve even found a factory in India ready to get started. They’ve also received certification from NSF International, a Michigan-based product testing, inspection and certification organization.

“The certificate is required by the New York State health department,” Isaiah said. “Anything food-related needs to have that certificate.”

While the prototype is geared toward older patients, Ilana hopes the next version can focus on younger people who also struggle to eat independently.

“It’s a simple concept, which is very important,” said Aaron Herman, the couple’s oldest son, who also is involved in the venture. “Our goal is to give the patients independence and dignity.”

Getting a business off the ground is difficult enough. The coronavirus pandemic, however, hasn’t done the Hermans any favors. It’s created some delays in the development of their tray, however they say they’re still looking forward to the day when they can transform the lives of those wanting to regain some independence — even if it’s simply at the dinner table.

“Our goal,” Isaiah said, is for the tray “to enhance the quality of life, independence and dignity of patients.”

Ilana can only smile as she hears those words. “My husband has always been my No. 1 supporter in everything that I do.”