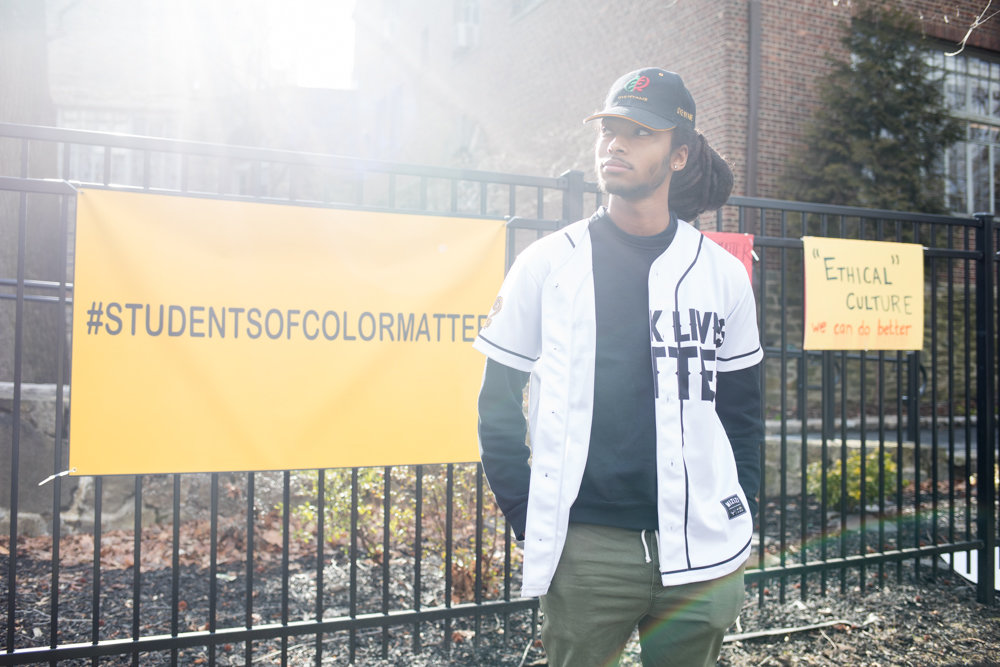 Fieldston senior Malakai Hart and his family are suing the school over alleged systematic racial discrimination. Hart and his family demand not just changes in the way Fieldston operates, but they also want school leader Jessica Bagby to step down.
JULIUS CONSTANTINE MOTAL 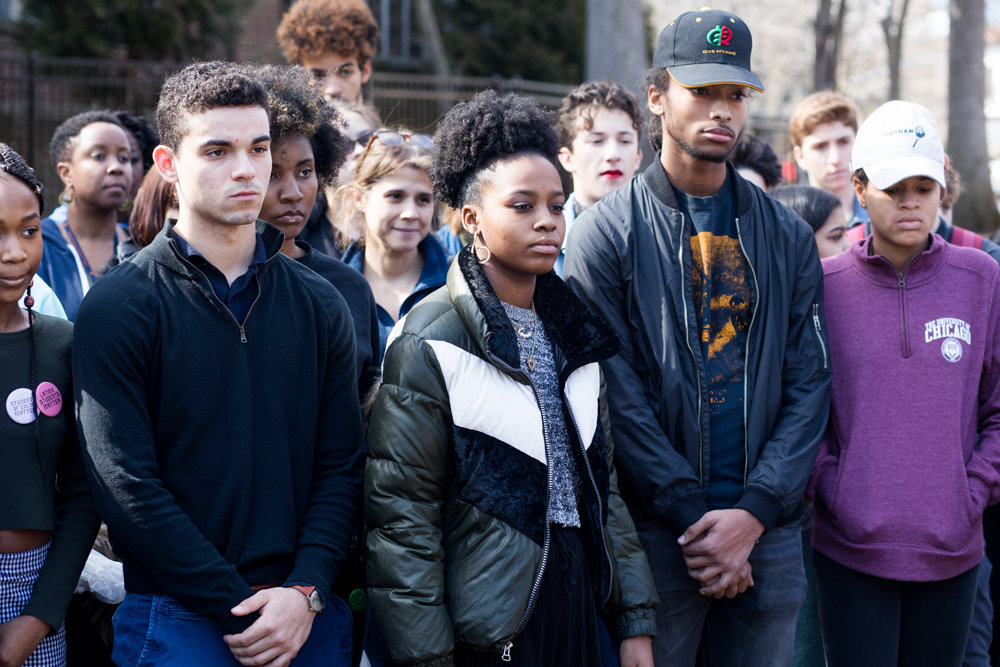 Malakai Hart, second from right in the front row, stands at a press conference on March 14 outside Ethical Culture Fieldston School following a multi-day occupation of the school’s administrative building. During the lock-in, students demanded administrators take stronger steps toward addressing what some students decried as systemic racism.
JULIUS CONSTANTINE MOTAL / File 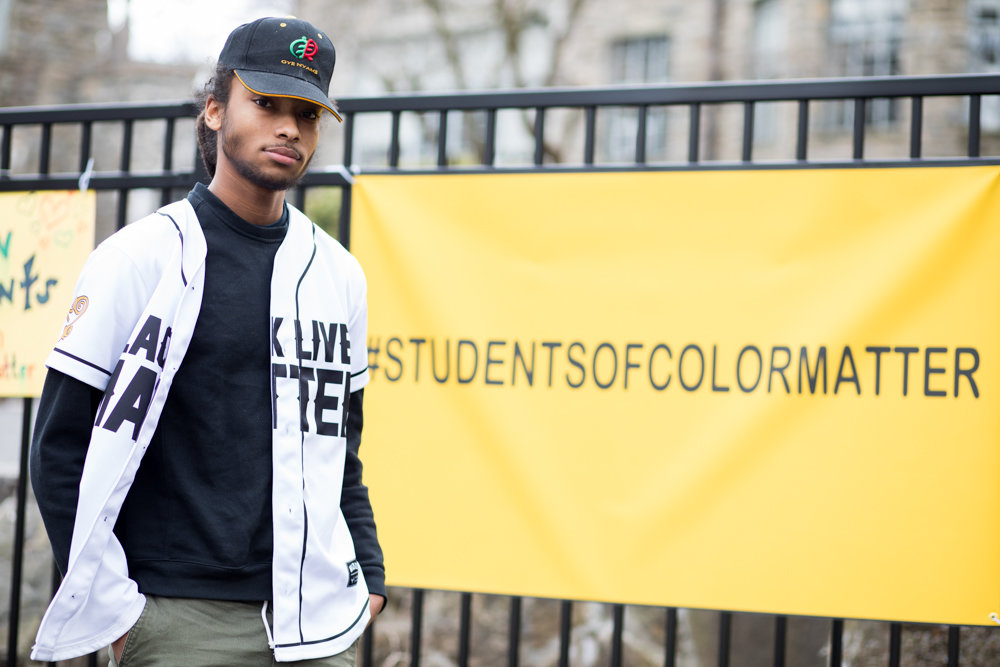 Malakai Hart was one of approximately 100 students who participated in a lock-in protest at Ethical Culture Fieldston School that started March 11. The lock-in followed weeks of mounting tension stemming from what some students felt was the administration’s inadequate response to a years-old video many have described as racist.
JULIUS CONSTANTINE MOTAL 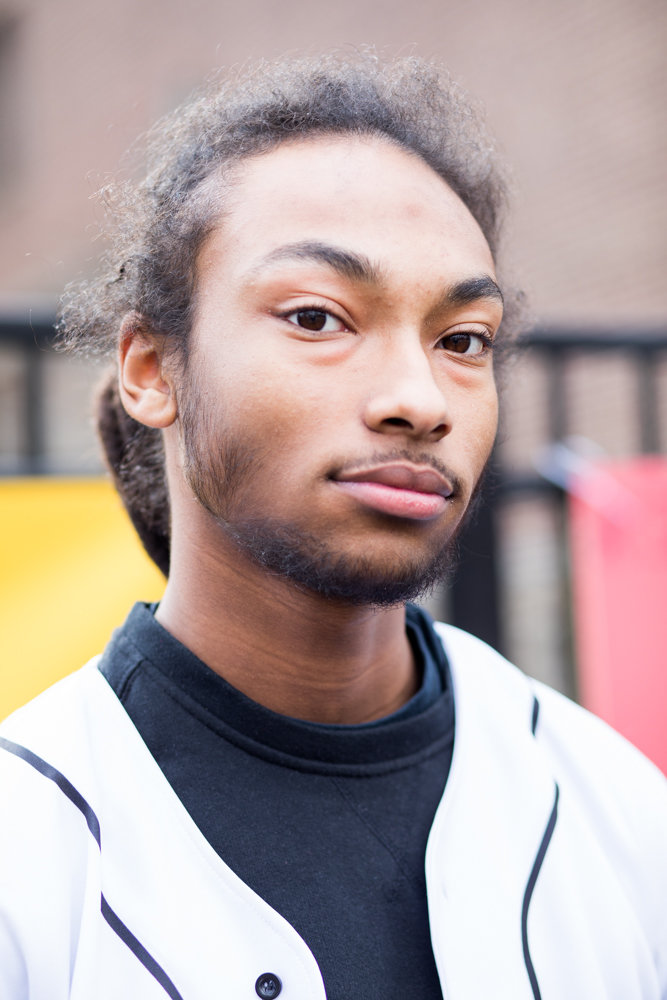 Malakai Hart and his family are suing Ethical Culture Fieldston School over what they say is systemic racism and discrimination against non-white students. Hart, who’s spent his entire academic life at Fieldston, is set to graduate in a few months.
JULIUS CONSTANTINE MOTAL
Previous Next
By ZAK KOSTRO

Malakai Hart never really felt like he fit in at Ethical Culture Fieldston School. From the very beginning when he was a kindergarten student up through his teenager years growing up in Yonkers after living in Marble Hill, something just never felt right.

It all seemed to come to a head during an English class when Malakai was in eighth grade. Eric Garner had died in 2014 after a New York City police officer, Daniel Pantaleo, wrapped his arm around the man’s neck while he and other officers wrestled him down on a Staten Island street.

One of Malakai’s classmates said Garner “deserved to die,” citing his alleged crime of selling untaxed, or “loose,” cigarettes on the street.

“Malakai was upset, and actually protested the fact that nothing happened to” the student who made the comment, said Derek Sells, an attorney representing Malakai Hart and his family in their racial discrimination suit against the prestigious private school. That student “wasn’t confronted. He wasn’t stopped.”

And it was, by no means, an isolated incident.

“Later on, it comes full circle,” Sells said. In February — four years after the discussion in Hart’s eighth-grade English class — that student allegedly is calling Malakai one of the most derogatory racial slurs in the English language, in a video circulated among other Fieldston students.

For Malakai and his family, this is a prime example of why they took Fieldston to court over what they call systemic racism and discrimination that has endured far too long, and that the school has utterly failed to address.

In the days following protests over another video some have deemed egregiously racist, the Hart family hired the Cochran Firm — founded by famous O.J. Simpson attorney Johnnie Cochran Jr. — to sue Fieldston, accusing the institution of systematic racial discrimination against black students and their families. The suit, filed March 18 in the U.S. District Court’s Southern District of New York, demands not just changes in how Fieldston operates, but also the removal of the school’s leader, Jessica Bagby.

The complaint alleges racial discrimination, retaliation, aiding and abetting unlawful practices, and negligent hiring, training and supervision, according to Hart’s attorneys. It cites numerous examples of how Fieldston administrators allegedly systematically discriminated against African-American students or looked away when white students made racially insensitive comments.

Fieldston spokesman David Goldin didn’t respond to multiple follow-up questions addressed to Bagby regarding the lawsuit’s allegations and what the school is doing to address some of the issues it raises, but instead referred to a previous statement.

“One day we’ll have a better understanding about why this particular lawyer finds it productive to file frivolous lawsuits against Fieldston,” the statement said.

“But for today, we can say — without reservation — that this is meritless and does not reflect the truth about our school. Jessica Bagby is not going anywhere, and does not deserve to be blamed or scapegoated for whatever this family’s concerns may be.”

A fear to speak out?

But one retaliatory incident in particular stands out, Malakai’s lawyers said. When parents of a 12-year-old student voiced complaints about racial discrimination — and ultimately filed a lawsuit against Fieldston — the school fired back by making what the Cochran Firm described as false allegations to the state’s Child Protective Services office that the parents abused and neglected their child. Bagby also made a public statement calling the lawsuit “baseless,” while accusing the family of “profiteering” off of the incident, thereby putting money “ahead of students’ safety.”

Fieldston has come under fire recently for multiple racially motivated incidents, including two separate videos of students using racial slurs, and other issues that have roiled students, parents and the administration.

Students organized a sit-in the week of March 11, protesting these incidents and what some have described as disparate treatment of black and other non-white students there.

Bagby, meanwhile, has publicly acknowledged the school’s “current situation arises out of multi-year racial trauma” and maintained she, along with the board of trustees and administrative council, take responsibility for addressing “cultural and systemic concerns” to better serve Fieldston students and faculty of color.

The Hart lawsuit claims the collective discriminatory actions and practices by Bagby and other school leaders created a hostile educational environment for black students, denying them equal rights and benefits afforded non-black students there.

Still, despite the academic culture the Harts described, “Malakai has been an active participant at the school throughout” his years there “in terms of helping the school live up to the Ethical Culture sort of mission,” his father, Carl, said.

And yet, by the time of that defining moment in eighth grade — long before controversy exploded in February over the slur-laced videos and the culture they allegedly speak to — it already had become clear to Hart what he was up against.

“At that point, I really just felt like we, as black students at Fieldston, didn’t really matter, and that kids were able to just say whatever they wanted about us, and (that) that was fine,” Malakai said. “After being vocal about that, and saying my complaints to the school constantly, and sort of getting silenced — it’s tiring.”

But it also doesn’t help, Malakai added, he and other black students are glaringly in the minority at Fieldston.

The school is “definitely predominantly white,” Malakai said. “I don’t think segregation and separation is really the problem here, because I think with that many white students, the best thing for students of color — particularly black students — to do is stick together.

“And that’s sort of what we’ve done throughout the years. It’s not a matter of separation. It’s a matter of survival.”

Fieldston officials and other plaintiffs are expected to be served with the lawsuit this week, according to court filings. The case has been assigned to Judge John Koeltl, a Clinton appointee probably best known for ultimately sentencing civil rights lawyer Lynne Stewart to 10 years in prison after she was accused of providing material assistance to a terrorist, working with 1993 World Trade Center bombing planner Omar Abdel-Rahman, and allegedly passing messages to his followers in Egypt.

Koeltl also is presiding over the Democratic National Committee’s lawsuit against the Russian Federation, WikiLeaks and the Trump campaign over alleged Russian interference in the 2016 presidential election.