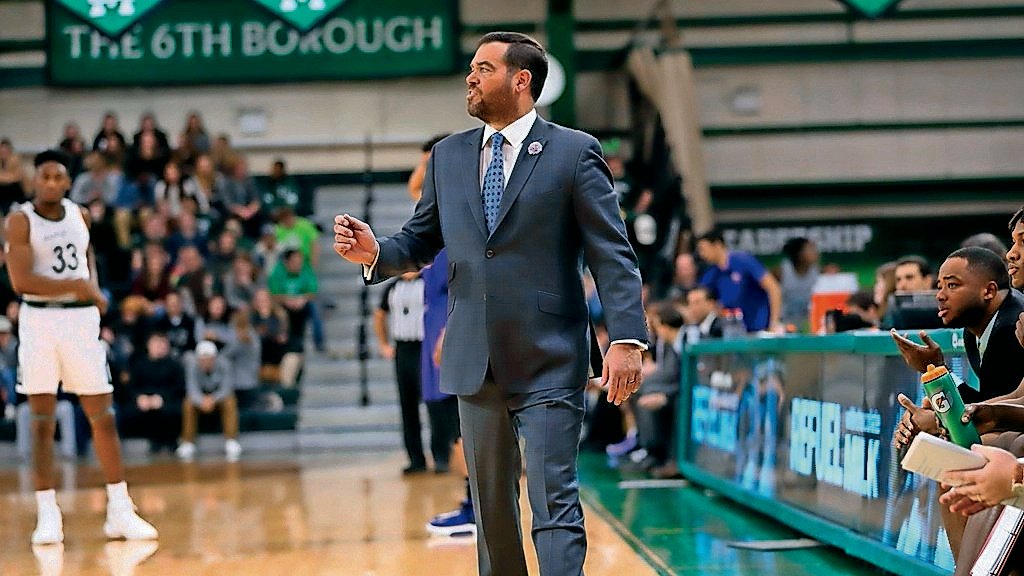 The college basketball world was taken by storm Oct. 25 over the firing of Steve Masiello less than two weeks before he was set to start his 12th season on the sidelines for Manhattan College. The aftermath of the shocking report has bumped up associate head coach RaShawn Stores to interim head coach, while star player Jose Perez has opted for the transfer portal for a new opportunity.
Courtesy of Metro Atlantic Athletic Conference
By Pete Janny

The afternoon of Oct. 25 marked the end of an era for the Manhattan College men’s basketball program.

What began as a normal day as the men’s college basketball moved closer to opening day suddenly changed with the virality of a couple tweets: Steve Masiello was out as head coach after 11 seasons at the school. And associate coach RaShawn Stores was elevated to interim head coach.

Ironically, the news broke a week after the college received great news about the men’s basketball program. On Oct. 18, the Metro Atlantic Athletic Conference announced Manhattan as its preseason pick to finish second place in a poll voted by the league’s 11 head coaches. The Field of 68 podcast network — composed of college basketball writers — tabbed Masiello as their MAAC Coach of the Year pick in a preseason college basketball almanac.

The sudden departure of Masiello has had other consequences for the Jaspers as well. So far, three players have transferred out of the program, led by the Preseason MAAC Player of the Year Jose Perez who committed to play his final season at West Virginia. Meanwhile, Hofstra transfer Omar Silverio and Samba Diallo are also exploring their options to play at a new school this season.

There is belief among the players themselves and other college basketball experts that the ex-Manhattan players will have immediate eligibility elsewhere due to Masiello being fired this late in the calendar year. Perez told Jon Rothstein of CBS Sports that he expects to be eligible this season at West Virginia, while Silverio tweeted out telling coaches who are interested in him to contact Masiello first. Multiple sources have confirmed to The Riverdale Press that Masiello is indeed helping his former players transfer out.

As it stands, the Jaspers are already down three would-be starters on the 2022-23 team, with the possibility of more players joining them. Losing all three players is expected to have huge implications on the MAAC rankings after Manhattan was picked to finish second by the coaches.

The shocking development came from a Twitter account named @FrankInGeneral, and set off a series of tweets confirming the report to be true. Zach Braziller of the New York Post and Adam Zagoria of The New York Times were among the journalists to break the story before the Manhattan College Athletics Department released its own statement:

“We thank Coach Masiello for his service and wish him well. As we look to building successful teams for the future — and with the signing period approaching — we determined that it is time to begin rebuilding from the top down,” said Manhattan College athletics director Marianne Reilly.

The press release from Reilly stirred up a wave of criticism from those weighing in on the situation.

“I refuse to speculate, so if this is the real reason for the firing then this paragraph is baffling,” tweeted one user.

“Focused on recruiting season… they’re a contender to win the conference,” tweeted another user.

When asked for comment, a source from the Manhattan Athletics Department told The Press: “We are not going to comment on personnel matters due to privacy and confidentiality reasons.”

Yet, others were not opposed to the administration’s decision to move on from Masiello with the start of the season only days away. Some were quick to highlight the fact that Manhattan hasn’t had a winning season since Masiello led the Jaspers to the second of back-to-back MAAC Championships in 2015.

“Everyone thinks this is a mistake, but they haven’t spent the last seven years watching this team,” mentioned one Twitter user.

Braziller reported the decision to fire Masiello came after he asked the school for a contract extension that would have kept him in Riverdale past the 2022-2023 season.

The Press has also learned of a reported rift between Masiello and Reilly, whose contract was extended over the summer by former longtime Manhattan College President Brennan O’Donnell. It happened before O’Donnell was officially replaced by interim president Brother Daniel Gardner on July 1. The Press reached out to Masiello earlier this week but he declined to comment on the situation.

Now, with the season only a couple of days away, Masiello will no longer be coaching the team and RaShawn Stores, 30, has been promoted from associate head coach to interim head coach, according to the same press release.

Since capturing MAAC Championships in 2014 and 2015 with the Jaspers, Masiello did not record a winning record in any of his last seven campaigns. Overall, he was 162-177 and departs as third all-time in number of wins for a program that began play in 1904. No Manhattan coach had more victories in Draddy Gymnasium than the 80 games won by Masiello there.

Besides his early success in Riverdale, Masiello received widespread publicity in 2014 when the University of South Florida rescinded their offer for him to become head coach after discovering a discrepancy on his resume. It was revealed that Masiello did not graduate from the University of Kentucky like he claimed to have, even though Manhattan hired him three years earlier. Manhattan then offered Masiello the chance to come back on the condition that he would complete his degree — which he did in August 2014.

In February 2020, Reilly came to terms with Masiello on a contract extension that ran through the 2022-23 season.

Stores was a star point guard at the school from 2011 to 2016 before joining Masiello’s coaching staff in 2017. In fact, Stores was a walk-on for the Jaspers out of All Hallows High School in the Bronx, making him no stranger to underdog circumstances. In the press release announcing his promotion, Stores called Manhattan “my school” and it’s where he earned two degrees — a bachelor’s in business management in 2015 and a master’s degree in organizational leadership 2017.

He will now lead the Jaspers into their season opener on Nov. 7 at Virginia Commonwealth University.