Manhattan Jasper runner is chasing down a dream 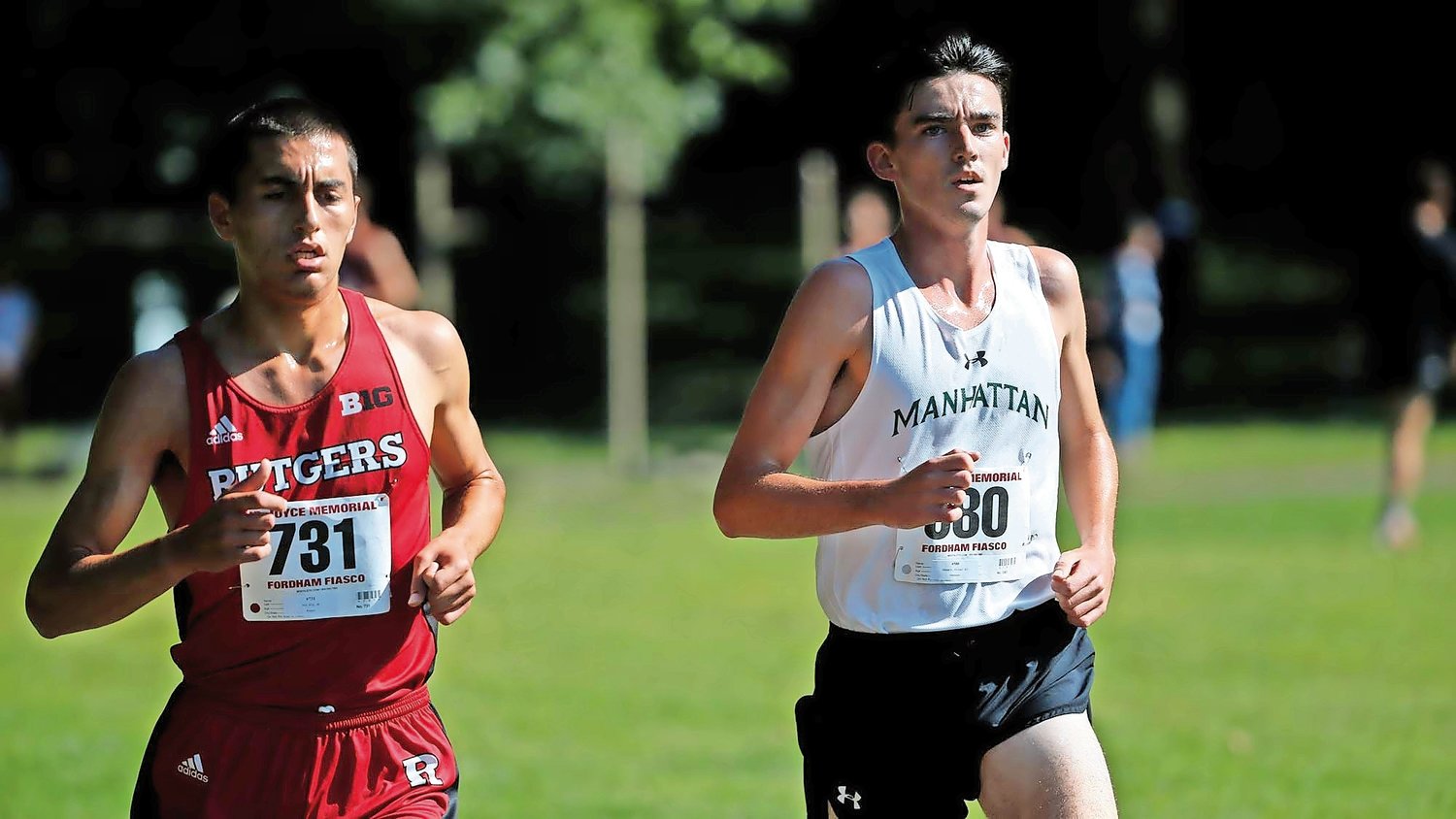 Michael Hennelly, right, is entering his fifth season for the Manhattan College cross-country team. For one weekend this summer, Hennelly traded Riverdale for Utica where he won the famed Boilermaker 5K.
Courtesy of Manhattan College Athletics
By Pete Janny

There seems to be a pep in his step in everything he does. He’s a force always on the move, running around the Parade Grounds at Van Cortlandt Park, up Manhattan College Parkway, migrating to the bustling hills of Riverdale Avenue and over the Henry Hudson Parkway overpass.Michael Hennelly is perfectly comfortable in these surroundings as he prepares for his final season running on the Manhattan College cross-country team.

For one weekend this summer, Hennelly substituted the urban corridors of Riverdale for the quaint springs of Utica to do what he does best.

It started with the idea of traveling upstate to spend time with his girlfriend and fellow cross-country standout at MC, Rory Graham, and her family, which overlapped with one of their family traditions. And for a family that loves running, there is an annual buzz that comes with the 5K Boilermaker Race in Utica.

Hennelly recalls the calm before the storm leading up to the noise of the starting pistol at the Burrstone Road Bridge in Utica. Hennelly and Graham stayed at her grandparents’ house the night before the race in anticipation of the long race day ahead.

It didn’t take long for Hennelly to notice the excitement in the air. It was the type of race every runner dreams of having felt the momentum of the fan support and the extra boost from the weather conditions.

“The conditions were great. We were the first race of the day and it was still cool,” Hennelly said. “The crowd was great and gave me all the energy I needed.”

The end result was a 30-second margin of victory. Hennelly won by doing many of the same things he normally does — which mostly means simplifying his approach. Instead of music sessions or eating certain foods, that weekend’s preparation routine only called for a practice run alongside Graham the day before.

“It was a great way to keep my mind off of the race leading up to it,” Hennelly said.

Kerri Gallagher, the director of cross-country and track & field at Manhattan, was unaware Hennelly ran the race until he had already won it. Gallagher says the runners have more freedom with their offseason workouts, and so Hennelly took matters into his own hands to create the biggest headline of the summer for the program.

“Summer running should be about getting some volume and building a base, but it’s also important to have some fun with it and challenge yourself,” Gallagher said. “I was really happy for him.”

Gallagher and the rest of her coaching staff at Manhattan are happy to have Hennelly back for a fifth season to help chase down a MAAC Championship with his teammates. Gallagher signed off on Hennelly’s request to use his fifth year granted by the NCAA due to the pandemic.

“I’m thrilled that finishing his eligibility fit with Mike’s academic and athletic goals,”

Gallagher said. “His leadership will be really beneficial for our team this upcoming season.”

The priorities of both sides aligned like they did when Hennelly committed during his senior year at Suffern High School in Rockland County as he followed in the footsteps of his older brother Patrick.

“As long as all the boxes checked for academics and attitude, it was going to be an easy decision to bring another Hennelly onto the team,” Gallagher said.

It provided a full circle moment for Hennelly and his family. Now the focus turns to capturing the elusive championship ring from the 11-team conference, which would be the icing on the cake for Hennelly’s career and the program’s first since finishing in a tie with Iona in 2001.

“I really felt like there was a lot more that I could accomplish as a collegiate runner,” Hennelly said.

“I believed that I had a lot left in me and that I couldn’t pass on an opportunity to continue to do what I love.”

It made perfect sense for a career in accounting, too. He’s been building up toward that with his experiences with internships and involvement with clubs on campus.

“Completing the MBA program will really help me be successful in the future with whatever I decide to do,” Hennelly said. “The decision wasn’t solely based on athletics.”

The Jaspers season opens with the Marist Opener at Vassar Farm in Poughkeepsie on Sept. 3. Hennelly will also have another chance to make a statement across the street at Van Cortlandt Park where he had a third-place finish and personal best 8K time last season.

“I’m extremely grateful for the people who have made this a great experience thus far,” Hennelly said. “I have made lasting friendships.”