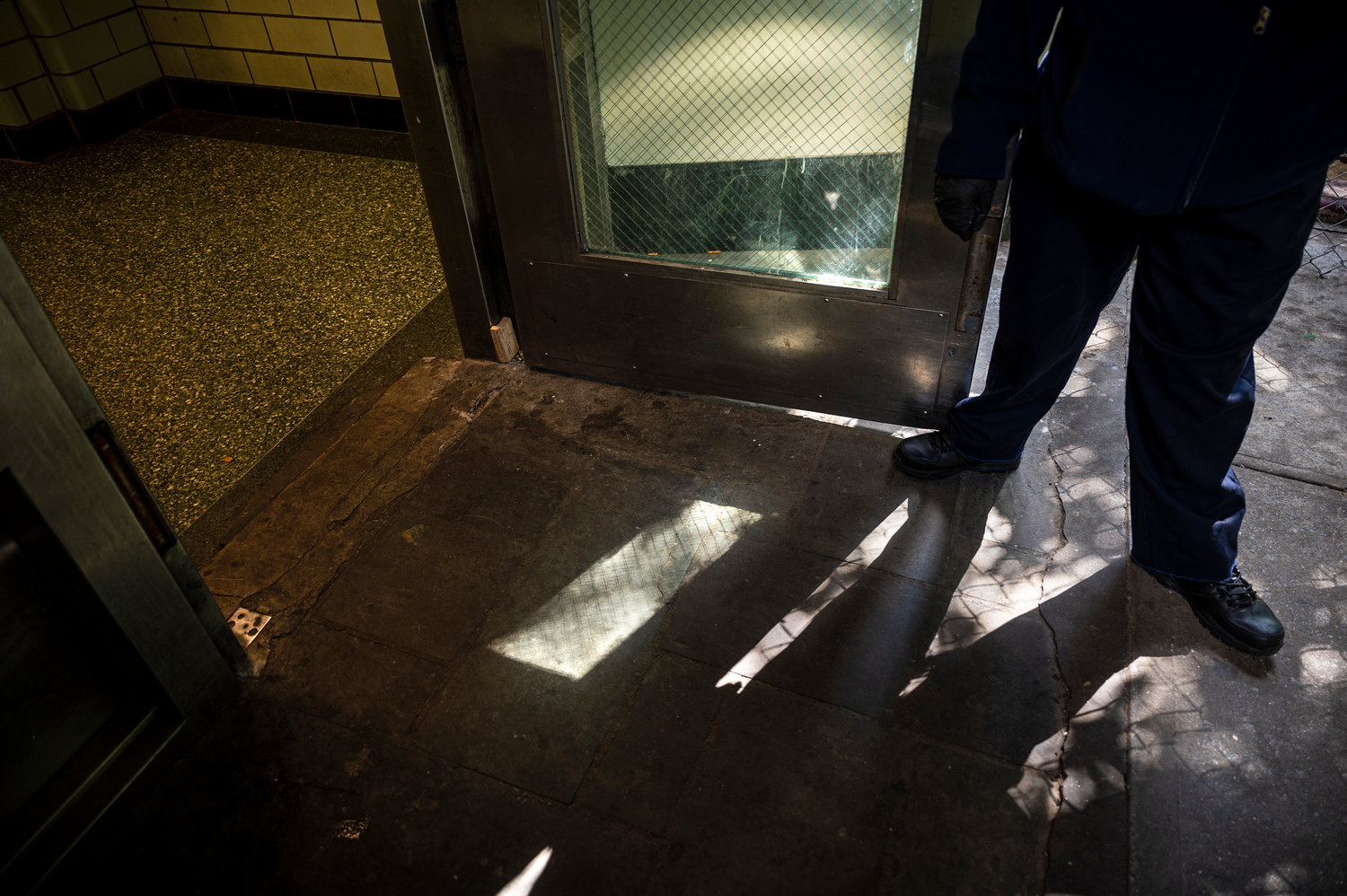 Custodial workers at Marble Hill Houses wedge a wooden block into the hinge to keep the door propped open at Building 6 on Exterior Street on Monday.
Hiram Alejandro Durán 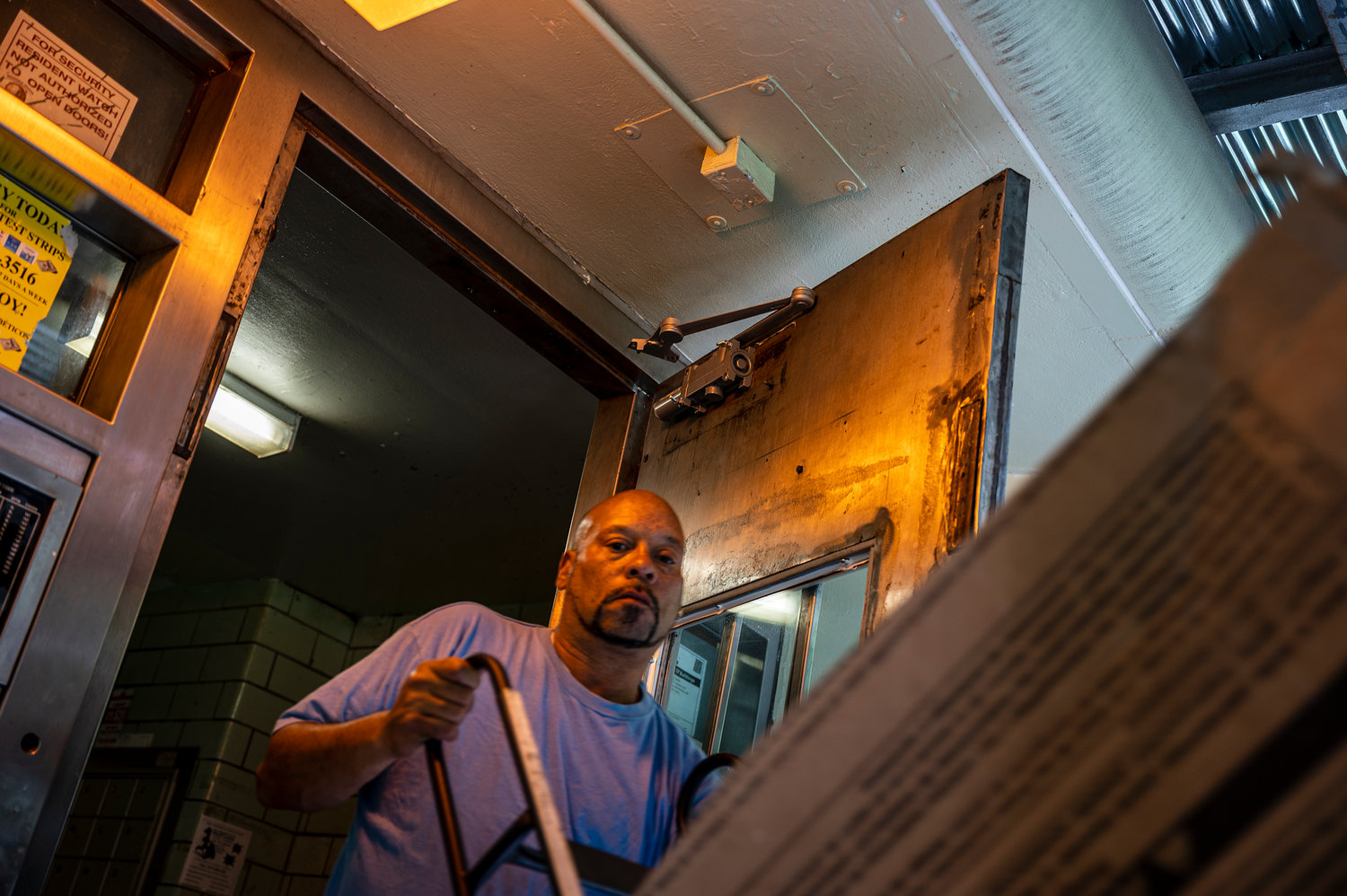 An automatic closing mechanism was completely separated from the door jamb at Building 3 on W. 225th Street.
Hiram Alejandro Durán 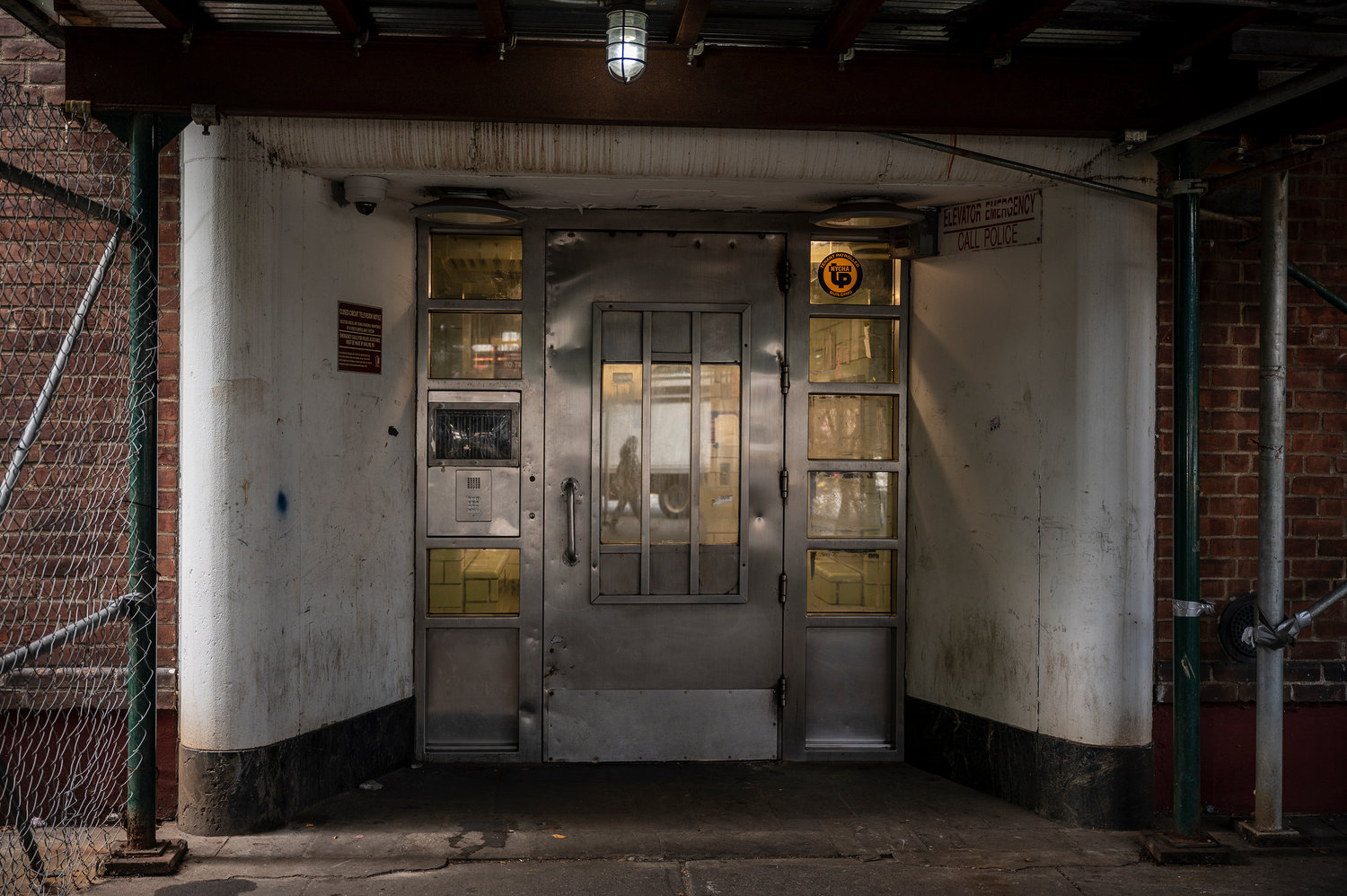 Building 11 at the Marble Hill Houses has a functioning main entrance.
Hiram Alejandro Durán
Previous Next

Quite a few are broken. As soon as NYCHA comes by and fixes it, another issue comes up.”
TONY EDWARDS Marble Hill Resident Association
By Abigail Nehring

The majority of front doors are broken or unlocked at the city’s nearly 300 public housing developments, field surveyors found in a review conducted this summer by comptroller Brad Lander’s office. The findings reveal a profound lack of security affecting nearly one in 15 New York residents — a city within a city — who live in New York City Housing Authority buildings.

Their front doors have become significantly easier to breech since former city comptroller Scott Stringer conducted a door survey in 2018 and provided a list of security recommendations.

This summer’s field survey found that 57.9 percent of NYCHA entrance doors are unsecured citywide, with higher rates in Brooklyn and the Bronx.

The rate of unsecured entrance doors in NYCHA buildings increased 34.4 percent in the four years from 2018 to 2022.

Security upgrades have come in fitful bursts over the decades at Marble Hill Houses, built in 1952 on land separated from Manhattan a century ago when engineers rerouted the Harlem River and joined it with the mainland.

At the 11 buildings that make up Marble Hill, auditors this summer observed 73 percent of doors were open, and 36 percent of the front entrance locks were broken. Fully 91 of the development’s doors were unsecured, they found – a dramatic increase from 36 percent four years ago when the comptroller’s staff last visited.

Their method of entry apparently varies by council district, too, with flat Medeco keys for the eight buildings in districts 10 and 11, and key fobs for the three buildings on Exterior Street in District 14.

District 14 constituents received the upgrade in 2013 thanks to discretionary funding former Councilman Fernando Cabrera allocated. All 11 buildings also gained 53 new CCTV cameras the same year at a cost of $625,000 to monitor the building entrances, elevators, and equipment rooms.

Nearly a decade later, few of the electronic fobs are still in use. On most days, the majority of doors are unlatched or propped open in inventive ways.

A custodial worker on her way into Building 6 Monday afternoon said she had wedged the door open with a block of wood herself because she didn’t have a key fob. She would leave it that way until about 4pm, when she finished her shift, she said. “Then they’re on their own.”

Marble Hill Residents Association president Tony Edwards said even when doors are closed, he’s seen people strong-arm their way through by pulling the door forcefully enough to overpower the magnet meant to seal it shut.

“Quite a few are broken,” Edwards said. “A lot of people are strong enough to actually circumvent the mechanism. As soon as NYCHA comes by and fixes it, another issue comes up.”

In past years, NYCHA has placed security staff in building lobbies where doors were temporarily broken or unsecured. Edwards said he doesn’t see the guards anymore, likely because those discretionary funds have now expired.

“Residents like myself want to live in a secure environment,” Edwards said. “It concerns everyone when the doors are not functioning properly. Even when there’s an easy fix, it can take a week to be rectified. Everything is at a snail’s pace.”

Over four years,
a rapid decline

NYCHA’s lobby security has deteriorated dramatically since 2018 when the comptroller’s office last conducted a review of entrance doors. At that time, surveyors provided a list of repairs and made specific recommendations for the authority to tackle the issue and begin regularly inspecting exterior doors and locks.

The problem is now “large, systemic, and apparently worsening,” deputy comptroller Maura Hayes-Chaffe wrote in a letter to NYCHA’s interim CEO Lisa Bova-Hiatt Sept. 20. “It appears that NYCHA did not implement all of the above-listed recommendations.”

“We are bringing our observations to your attention because of the obvious safety risks to residents.”

Broken locking mechanisms may put NYCHA in violation of city statute that calls for “automatic self-closing and self-locking doors” at the entrance to all multiple-family residential buildings.

“We know that there are many urgent repair and maintenance needs facing NYCHA at this moment,” Hayes-Chaffe wrote. “Securing building entry doors must be a high priority among them.”