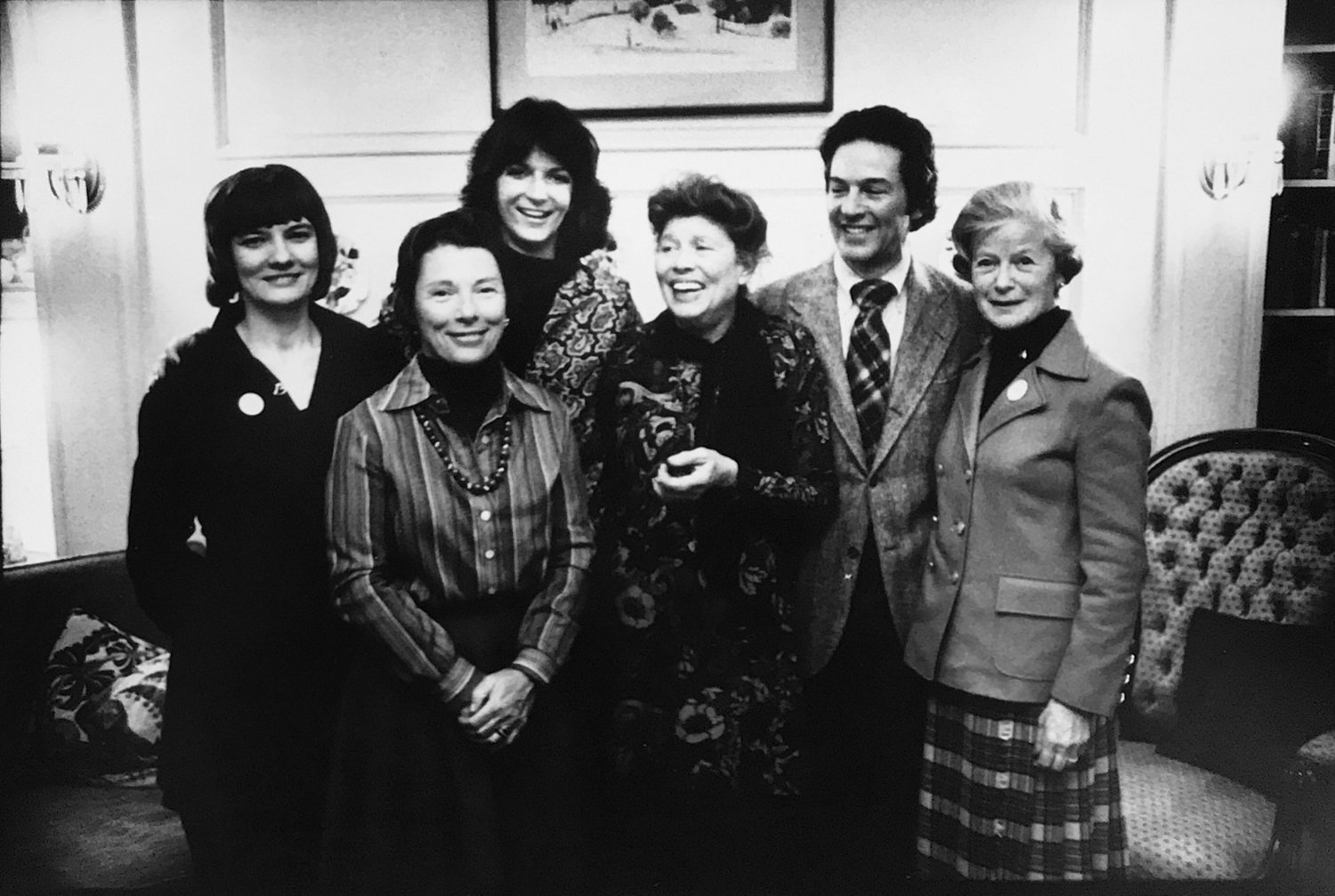 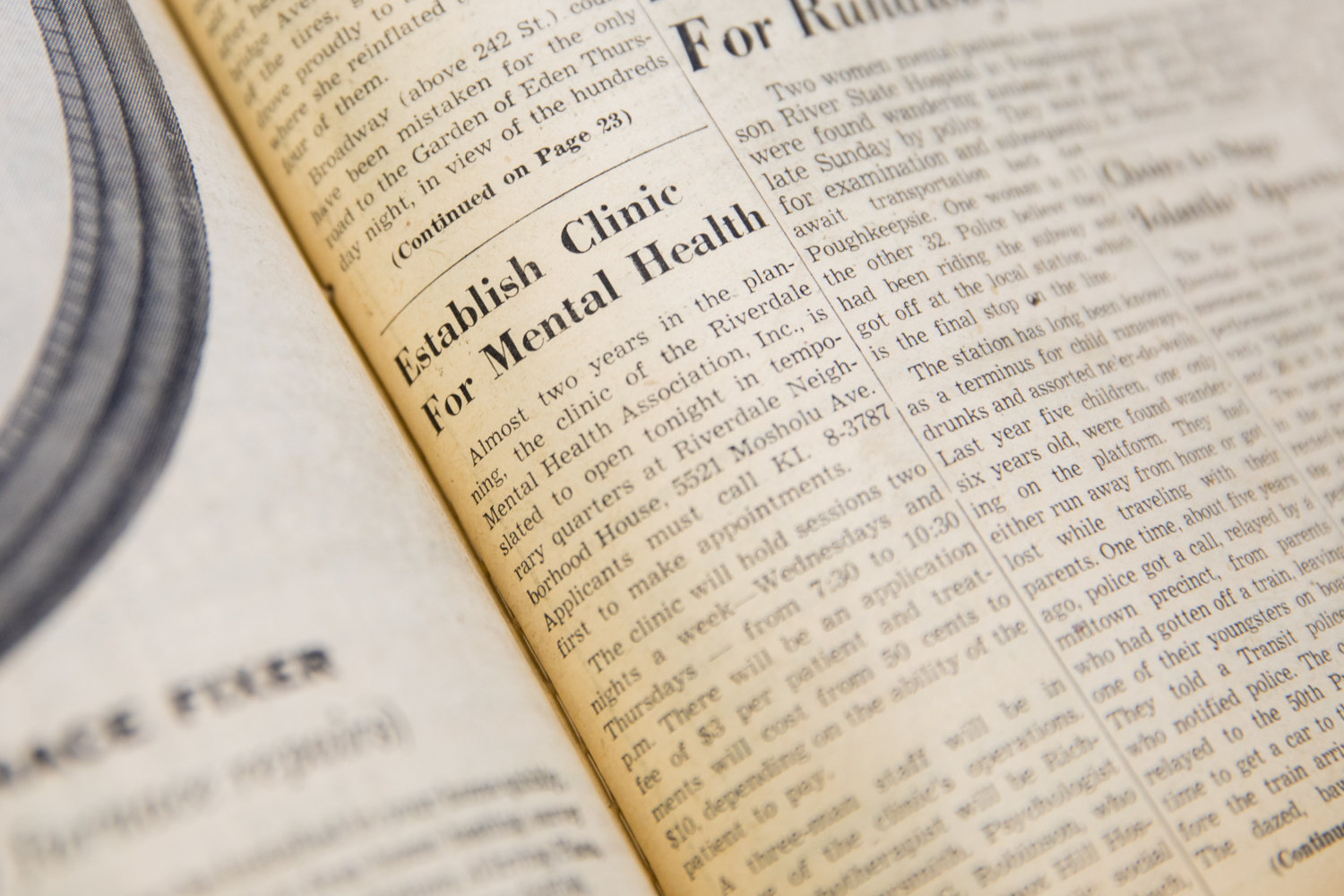 The Riverdale Mental Health Association opened its doors on March 10, 1960, at Riverdale Neighborhood House on Mosholu Avenue. Its arrival received a small write-up in that week’s edition of The Riverdale Press.
JULIUS CONSTANTINE MOTAL 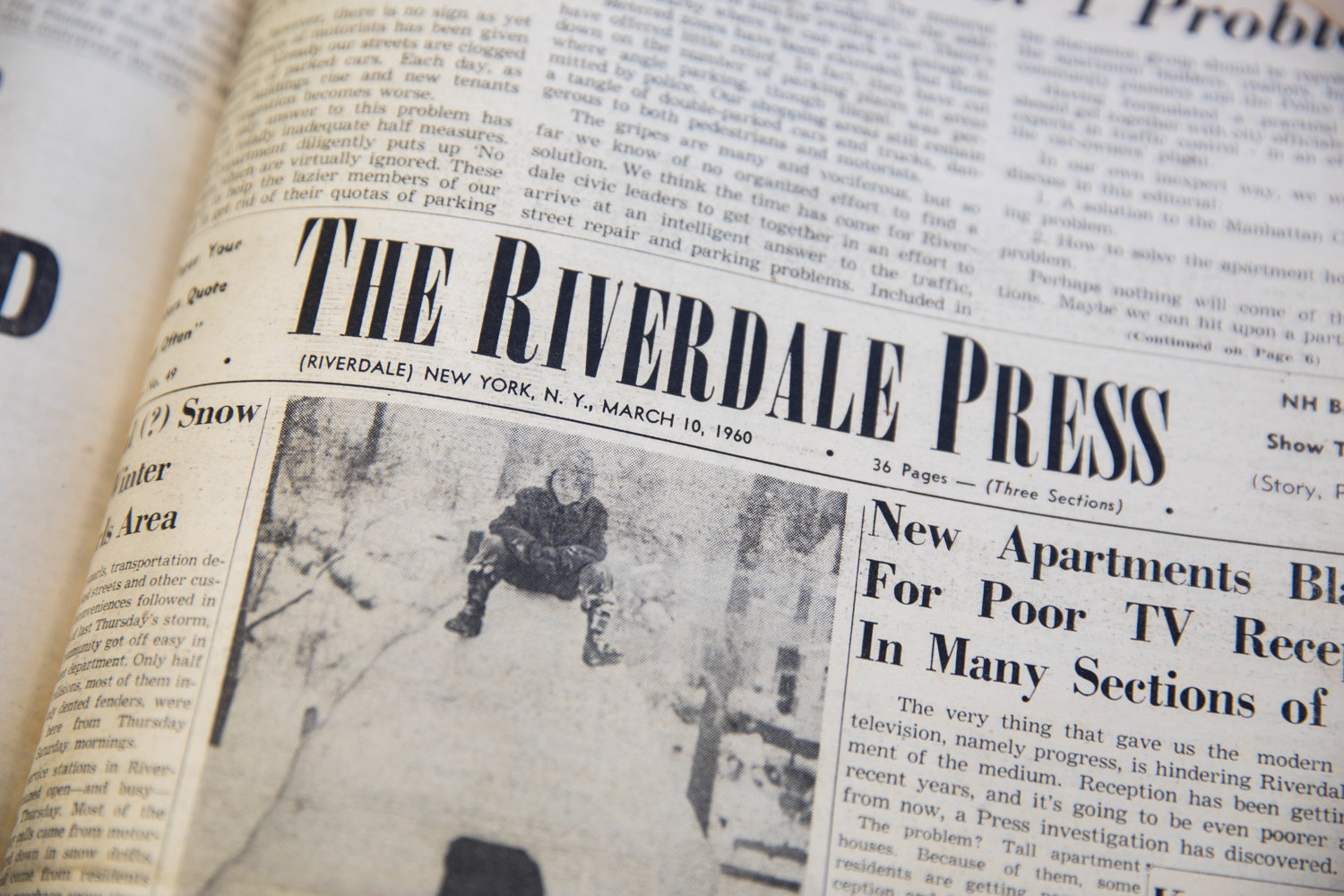 The March 10, 1960, edition of The Riverdale Press included a mention of the opening of the Riverdale Mental Health Association, which has since rebranded to Mosaic Mental Health.
JULIUS CONSTANTINE MOTAL 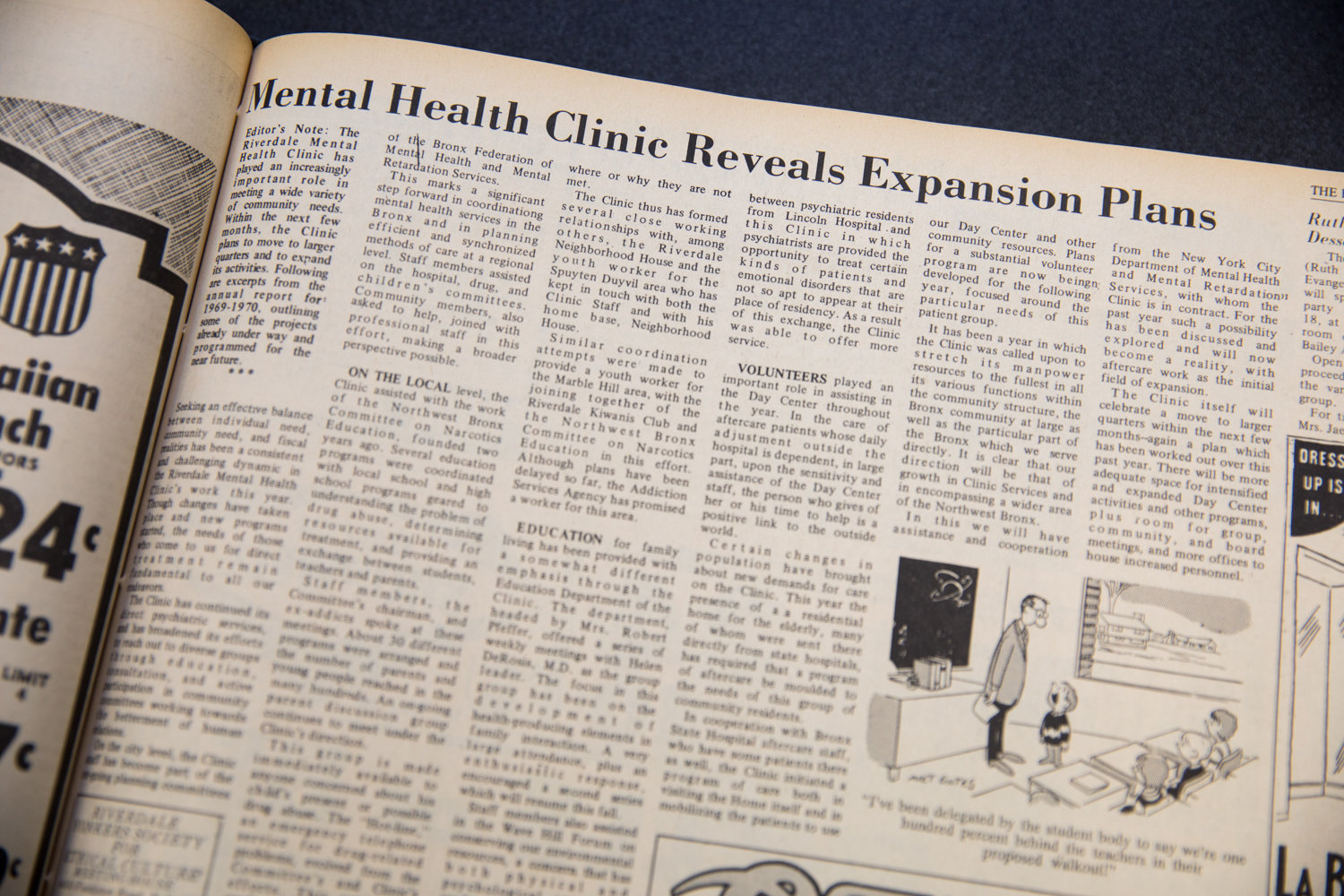 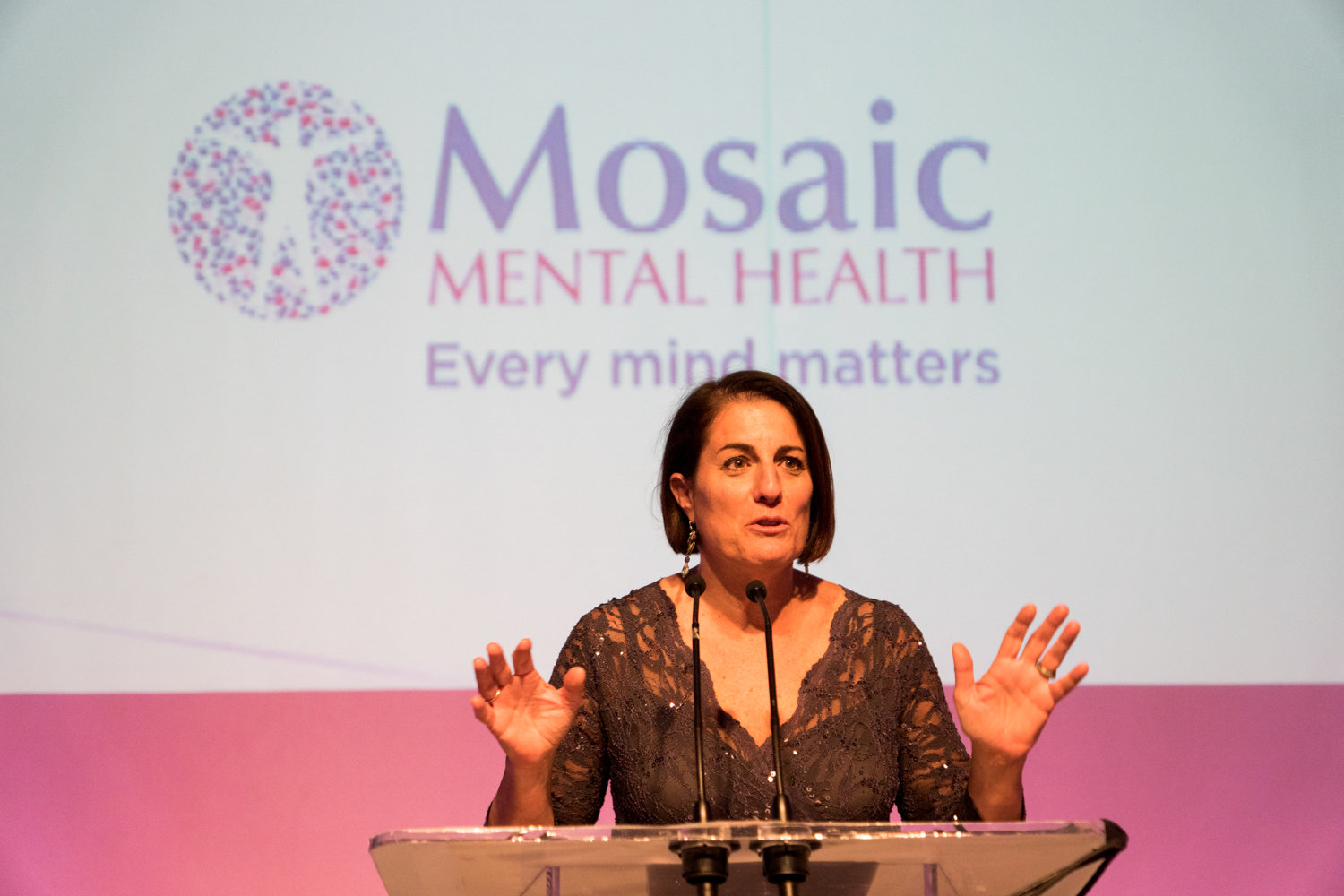 Activists striving to destigmatize mental health and improve access to treatment might seem like a recent endeavor — but the northwest Bronx was paving the way in improving mental health services starting some 60 years ago.

It was March 1960 when the Riverdale Mental Health Association opened its doors at the Riverdale Neighborhood House. With just three staff members — a psychologist, psychotherapist, and a psychiatrist — the organization ran twice-weekly therapy sessions, charging between 50 cents and $10, “depending on the ability of the patient to pay,” according to a Riverdale Press story chronicling its opening.

Mental health services were scarce in the northwest Bronx, and with the community vying for some local help, the Riverdale-Yonkers Ethical Culture Society did the ethical thing, stepping in to play a major role in helping the association get off the ground.

At the time, even what mental health services did exist were under-funded and abusive. According to a 1983 New York Times story, the population of “mental hospitals” in New York state peaked in 1955, with a total population of 90,000 people.

By 1962, the association had struck a deal with the state’s department of mental hygiene. They would start treating patients who had recently been released from those state hospitals in an intensive outpatient programs aimed at reducing the rate of re-admittance to psychiatric wards, which was quite high at the time.

State funds kept flowing into the program, and according to a 1970 story in The Press, those funds were “contingent on continued support from the community.”

By the clinic’s 10th anniversary in the middle of the Nixon era, RMHA had expanded with five psychiatrists, two psychologists, seven social workers, two art and occupational therapists, and a psychiatric nurse. Community volunteers helped staff the clinic and run workshops in the community, guiding parents through child development classes, and partnering with the Northwest Bronx Committee on Narcotics Education.

The community hosted a series of drug education seminars in 1970, and some issues are still the same: A letter to the editor from that spring broaches the question of legalizing marijuana, while parents across the community worried about what they’d do after their children graduated high school and moved away from home.

One answer provided at a seminar? “Pray.”

On the eve of the “war on drugs,” the Riverdale Kiwanis Club launched an emergency narcotics hotline. Staffed by volunteers and run out of RMHA’s offices, anonymous callers sought help for addictions and emergencies.

The hotline later received a $25,000 fundraising boost — the equivalent of more than $171,000 today. That boost came from the Alan Ader Fund, which was started after 20-year-old Riverdale native Alan Ader shot himself while high on LSD.

By some accounts, mental health resources were booming in the northwest Bronx, yet then-U.S. Rep. Mario Biaggi fought against closing public hospitals and outpatient clinics after losing federal funding under Richard Nixon.

“The president announced his magnificent plans last week to improve the health prospects of Americans,” Biaggi said at the time. “But at the same time, he was planning to phase out eight public health service hospitals and 30 outpatient clinics.”

Biaggi noted that rather than allocate a necessary $140 million to improve those facilities, the president would close them, forcing more patients into the city’s already overcrowded hospitals. An ad placed in The Press that same month called for readers to “join Operation Drug Alert” as Odyssey House, a drug treatment facility, struggled without government funds.

So where are we at now?

The Riverdale Mental Health Association rebranded in 2017 to Mosaic Mental Health, and now works out of some slightly smaller offices at 5676 Riverdale Ave. While the office might be a little smaller, their range of services is enormous — they’ve continued providing the family and parent support that started way back in the 1970s, and now help with transitional housing, job assistance, and offer couples and group therapy that hark back to those public sessions that kicked off their help.

Other developments are a little more grim. The community has fought for years against the closure of the in-patient psychiatric unit at Allen Hospital across the Broadway Bridge from Marble Hill. It’s the only hospital that offers intensive psychiatric services this close to the northwest Bronx.

The Kiwanis Club’s narcotics hotline was phased out long ago. While a search turns up a Spuyten Duyvil-based drug hotline, the Archer Drug Rehabilitation Hotline, their website notes that their facilities are based in southern California, not the Bronx, leaving Mosaic as the only local source of assistance.

The Bronx regularly leads the five boroughs in opioid deaths as heroin and fentanyl kill thousands nationwide. According to the city’s health department, the Riverdale-Kingsbridge area is the 15th worst of 42 health districts citywide, with about 18 of 100,000 people dying from overdoses each year.

In spring 2019, northwest Bronx residents and elected officials soundly rejected proposals for a “holistic” drug treatment facility on Broadway. Electeds — including Mario Biaggi’s granddaughter, state Sen. Alessandra Biaggi — worried that the private insurance model that Ekawa Holistic Medicine proposed would only take advantage of struggling people, rather than truly helping them. At present, Mosaic is the only place for people struggling with addiction or similar issues in the northwest Bronx.

John Saunders, the clinical director of Arms Acres, a drug treatment facility in Norwood, told The Press last September it was difficult to reach out to the community.

“We need to find out what we can do to reach the people when they need us the most,” Saunders said.

That may look a little different than it did in the ‘60s and ‘70s, with the legalization of marijuana on the horizon. But hopefully, as long as the community refuses to abandon those who need help, there are many who believe that future may get a little brighter.

CORRECTION: Andrea Simon was one of the members of the Riverdale Mental Health Association’s $1-A-Week committee back in 1977. The Feb. 20 edition listed an incorrect first name.