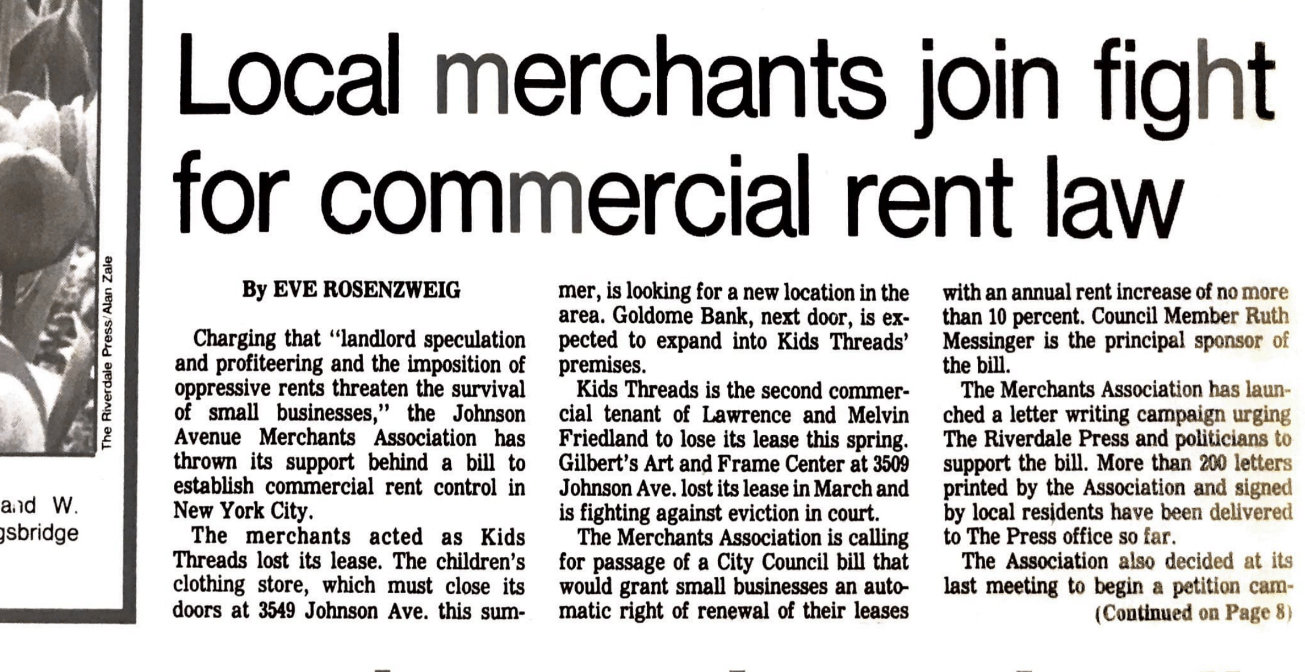 Originally published in The Riverdale Press on May 10, 1984.
By EVE ROSENZWEIG

EDITOR'S NOTE: This story was originally published on May 10, 1984, and was reprinted as part of the 70th anniversary of The Riverdale Press.

Charging that “landlord speculation and profiteering, and the imposition of oppressive rents threaten the survival of small businesses,” the Johnson Avenue Merchants Association has thrown its support behind a bill to establish commercial rent control in New York City.

The merchants acted as Kids Threads lost its lease. The children’s clothing store, which must close its doors at 3549 Johnson Ave., this summer, is looking for a new location in the area. Goldome Bank, next door, is expected to expand into Kids Threads’ premises.

Kids Threads is the second commercial tenant of Lawrence and Melvin Friedland to lose its lease this spring. Gilbert’s Art and Frame Center at 3509 Johnson Ave., lost its lease in March and is fighting against eviction in court.

The merchants association is calling for passage of a city council bill that would grant small businesses an automatic right of renewal of their leases with an annual rent increase of no more than 10 percent. Councilwoman Ruth Messinger is the principal sponsor of the bill.

The merchants association has launched a letter-writing campaign urging The Riverdale Press and politicians to support the bill. More than 200 letters printed by the association and signed by local residents have been delivered to The Press office so far.

The association also decided at its last meeting to begin a petition campaign to convince city and state legislators of the need for commercial rent control.

Representatives of more than a dozen Bronx merchants associations, meeting at the Kingsbridge Armory last Wednesday, also decided to back the Messinger bill. This group will print 15,000 postcards to be mailed to Mayor Ed Koch on June 1, “to empower the mayor,” said Cathy Montgomery, spokesman for the group.

A representative of the Central Riverdale Avenue Business Association attended the armory meeting. While CRABA is in sympathy with people who are being harassed by their landlords, the group has not taken a position on commercial rent control, according to the representative, who did not want his name used.

“Small business people must have protection from unscrupulous rent-gouging practices,” said Councilwoman June Eisland. But she called the Messinger bill “totally unrealistic,” because the city administration is “unalterably opposed” to it.

Seeing little hope for passage of a commercial rent control law, Ms. Eisland is calling instead for negotiations “with the mayor’s office and other movers in the city, to try to establish some protections for hard-pressed merchants.”

When a business like Kids Threads closes, it is a loss to the whole community, said Doris Stone, owner of Stix and Stones. Her business has picked up, but without commercial rent control to keep small businesses in the neighborhood, this new mood of young people with small children shopping on Johnson Avenue  can’t continue.