Miss dining out? It’s coming back — just outside 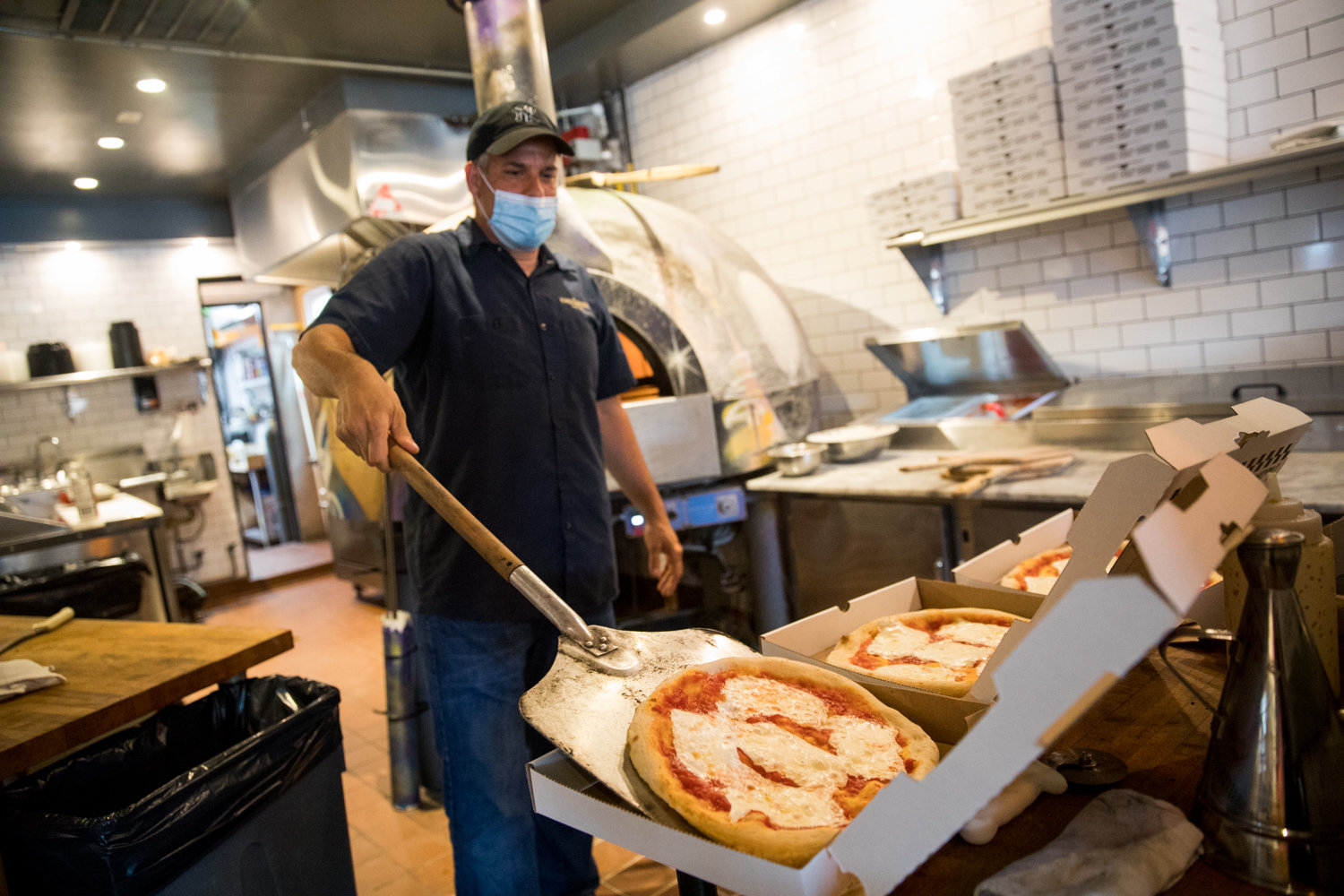 Christopher Giudice, co-owner of Kingsbridge Social Club, boxes a pizza for a customer’s order. The Kingsbridge Avenue pizza joint is planning to offer more robust outdoor seating when the second phase of the state’s reopening plan goes into effect for the city.
JULIUS CONSTANTINE MOTAL 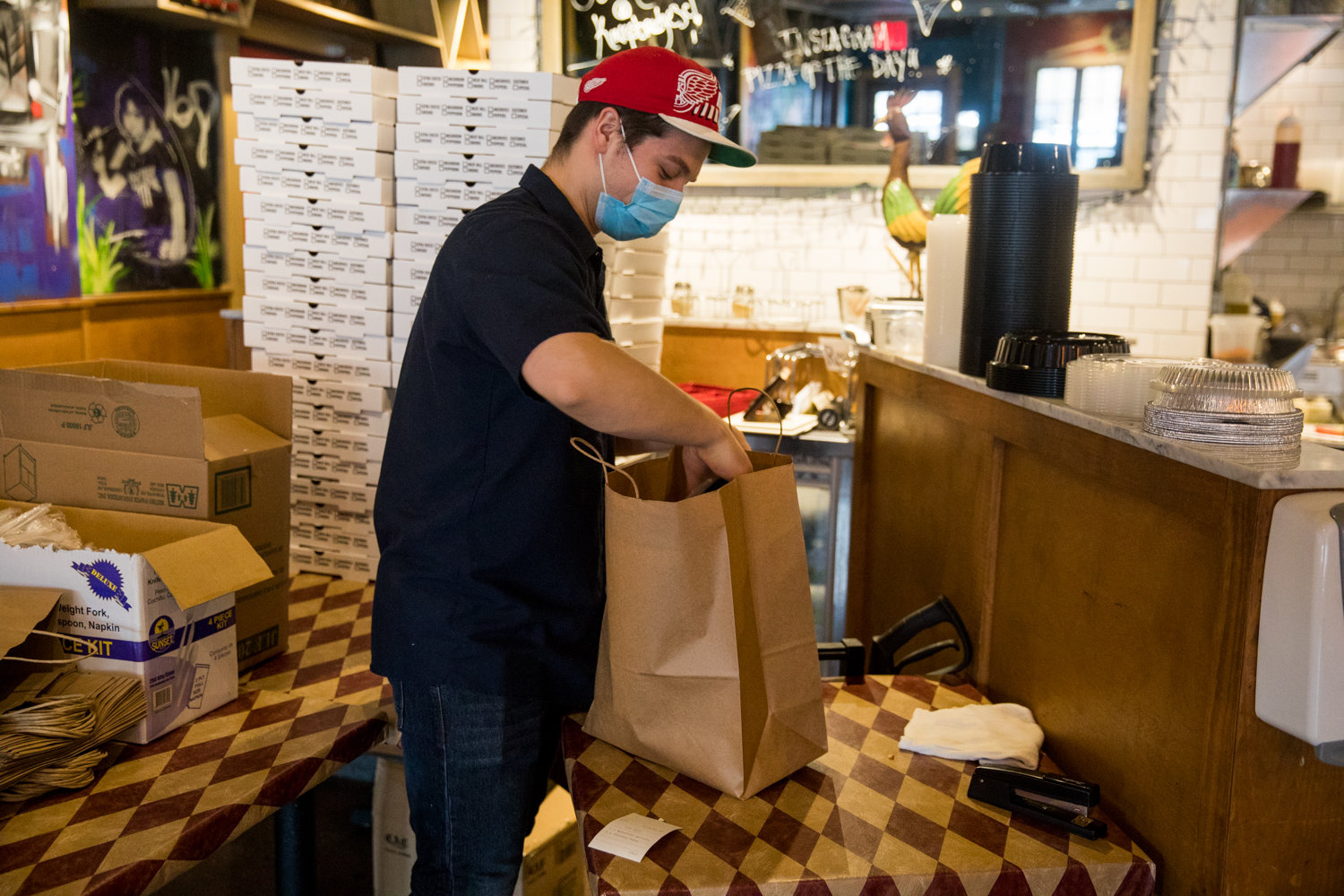 Ben Avery bags a customer’s order inside Kingsbridge Social Club, which has managed to stay in business despite the coronavirus pandemic. Restaurants have been moved up to the second phase of the state’s reopening plan for the city, but that will require outdoor seating.
JULIUS CONSTANTINE MOTAL 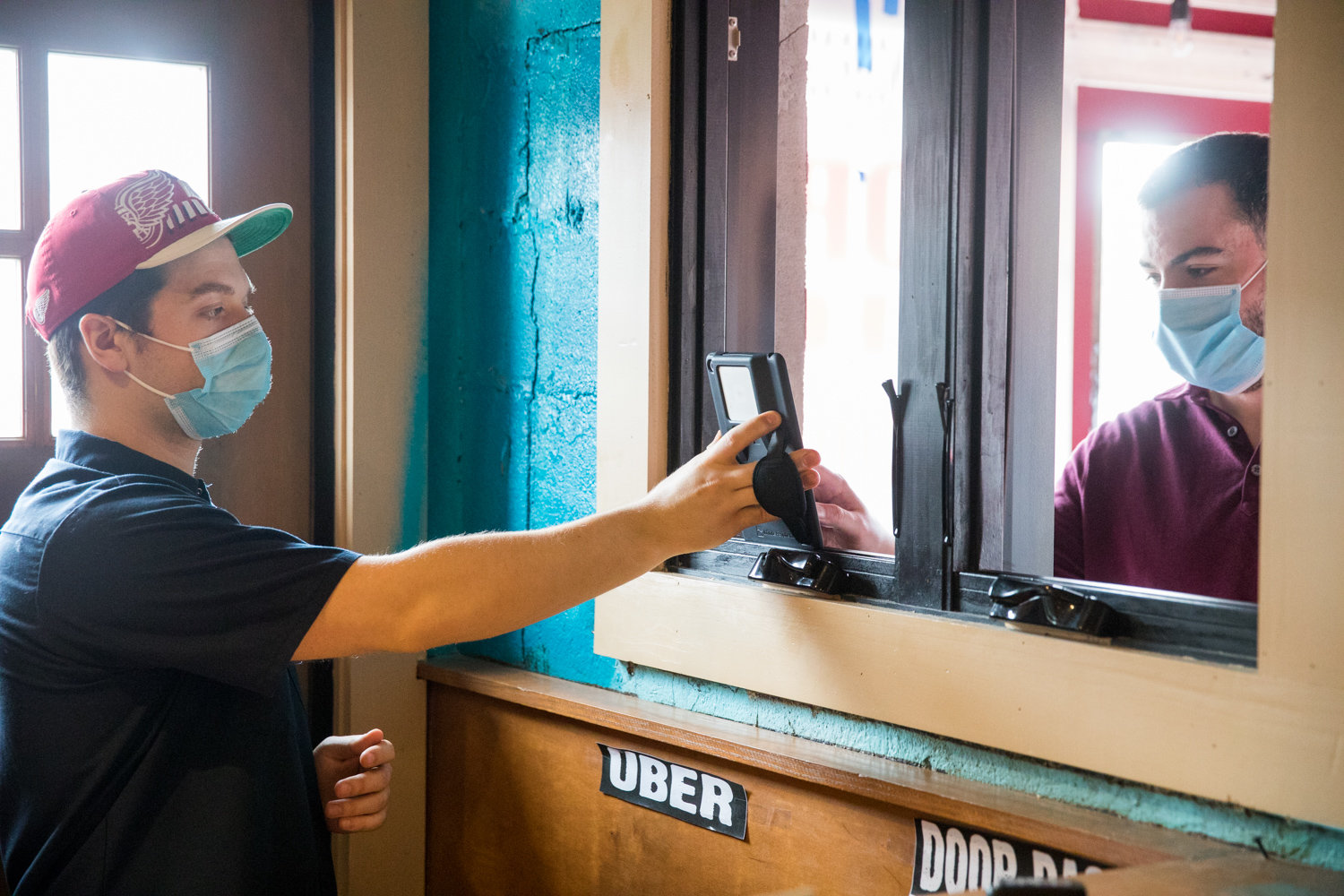 Ben Avery helps a customer pick up his order at Kingsbridge Social Club, which is planning to offer more outdoor seating when the second phase of the state’s reopening plan goes into effect for the city — possibly as early as June 22.
JULIUS CONSTANTINE MOTAL 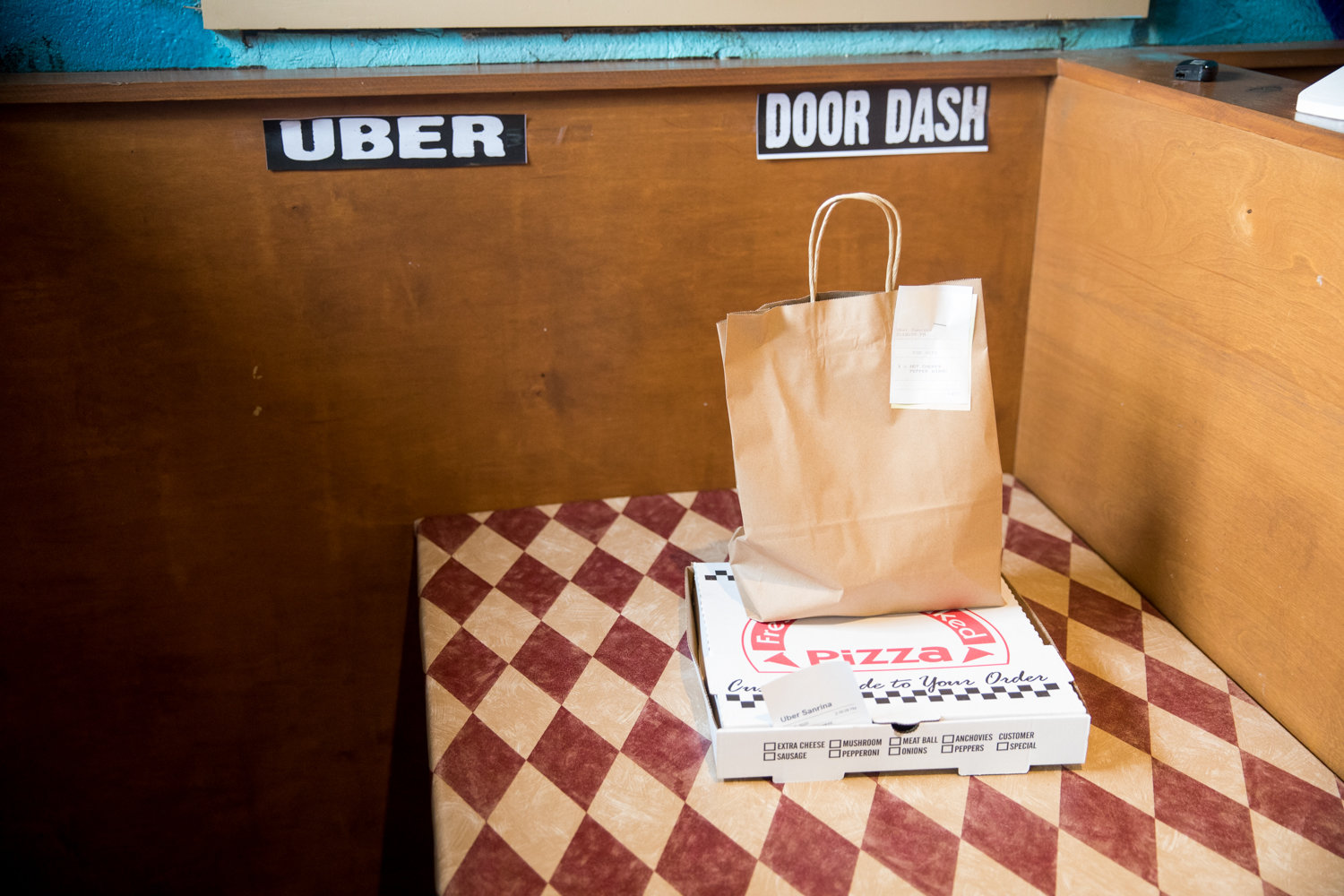 An order awaits delivery inside Kingsbridge Social Club, which has beefed up its takeout and delivery options in the wake of the coronavirus pandemic. When the second phase of the state’s reopening plan goes into effect for the city — which could happen as early as June 22 — restaurants like the Kingsbridge Avenue establishment will be able to offer outdoor seating for patrons.
JULIUS CONSTANTINE MOTAL 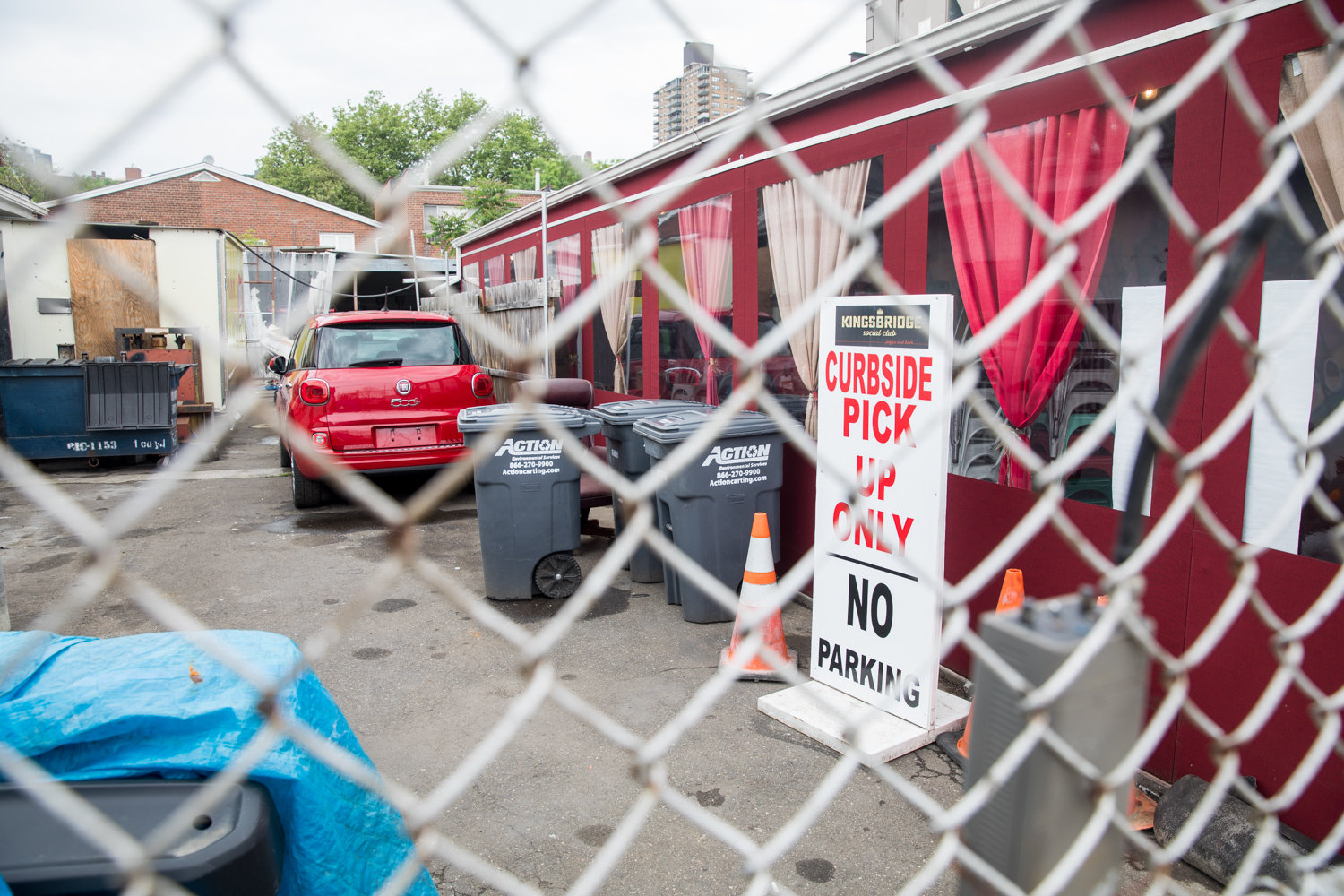 When the second phase of reopening goes into effect for the city, restaurants like Kingsbridge Social Club will offer more outdoor seating. That phase could begin in New York City as early as June 22.
JULIUS CONSTANTINE MOTAL
Previous Next
By PATRICK LINDO

There’s always that special pleasure of eating at home — even if it’s a dish prepared by a local restaurant. But nothing beats sitting down and having someone else serve you, prepared in a kitchen that’s literally just steps away.

Eating at restaurants is practically a distant memory at this point, with the coronavirus pandemic and all. But there is good news — dining in is returning as early as June 22, so long as you don’t mind sitting outdoors.

New York City started the first phase on Monday, meaning the earliest it can move to Phase II is two weeks from that point.

Still, infection rates and hospitalizations based on COVID-19 complications have fallen to their lowest point since the crisis began. And because of that, the governor hopes he can open that economic spigot just a little more by moving re-opening restaurants from the third phase up to the second.

“This is outdoor dining space,” Cuomo said during one of his daily briefings earlier this month. “This is not a restaurant with the doors open.”

Outdoor space needs to be adjacent to a restaurant or bar, but tables still need to remain six feet apart. Face masks must be worn by the wait staff, and also by patrons — except when they’re seated and eating.

Chris Giudice is ready to go, even if there isn’t necessarily a lot of sidewalk space in front of his Kingsbridge Social Club. Still, the manager of the popular Kingsbridge Avenue restaurant already has reached out to an architect to help plan tables and seating.

“We’re kind of waiting for some guidance,” Giudice said. “We’re looking at other states (to) see what they’ve done.”

Down the street, at 5668 Broadway, Silhouette is making plans to reopen as well. With more room to work with because of a parking lot in front, the Latin American restaurant already has applied for outdoor seating permits, according to general manager Natasha Collado. She hopes to process moves quickly so Silhouette is ready to go when the state gives the green light for outdoor seating.

That’s forced them to cut many from its staff, especially on the wait side. But now, they’ll have a chance to rebound with the limited dine-in options.

Tin Marin doesn’t have to wait for a sidewalk permit. The 3708 Riverdale Ave., eatery already offers outdoor dining. So for them, it’s more just waiting for the word from Albany.

“We are ready to go,” said Kenya Castillo, the owner of Tin Marin.

Tin Marin has room to expand, and so does Silhouette. Kingsbridge Social Club? Not so much. The sidewalk there is far narrower than typical city sidewalks, so the restaurant will have to open up patio space and maybe even extend into a neighboring parking lot.

The city council appears to be ready to help as well, pushing through more local legislation allowing restaurants — under the supervision of the city’s transportation department — to stretch their legs onto sidewalks, plazas, streets, parking lots, or any public and private space. With proper approvals, of course.

Mayor Bill de Blasio touted portions of this legislation as part of what he’s calling his “open restaurants” plan.

It “will help these businesses maximize their customer base while maintaining the social distancing we need to beat this crisis once and for all,” de Blasio told reporters during a June 4 news conference.

Open restaurants incorporates a lot of what the city council proposed, but ties it into the city’s “open streets” initiative, which has turned currently underutilized public streets — like a stretch of West 238th Street near Manhattan College — into pocket recreational areas.

The city already has closed more than 45 miles of streets, with an ultimate goal of reaching 100 miles before the pandemic’s end. Any restaurants located adjacent to these designated streets can expand dining into that space during the hours city officials close the roadway off to vehicular traffic.

“New York’s restaurants are part of what make us the greatest city in the world,” de Blasio said. “They’ve taken a hit in our fight against COVID-19, and there’s no recovery without them.”