Montefiore out, but Stagg moves right in 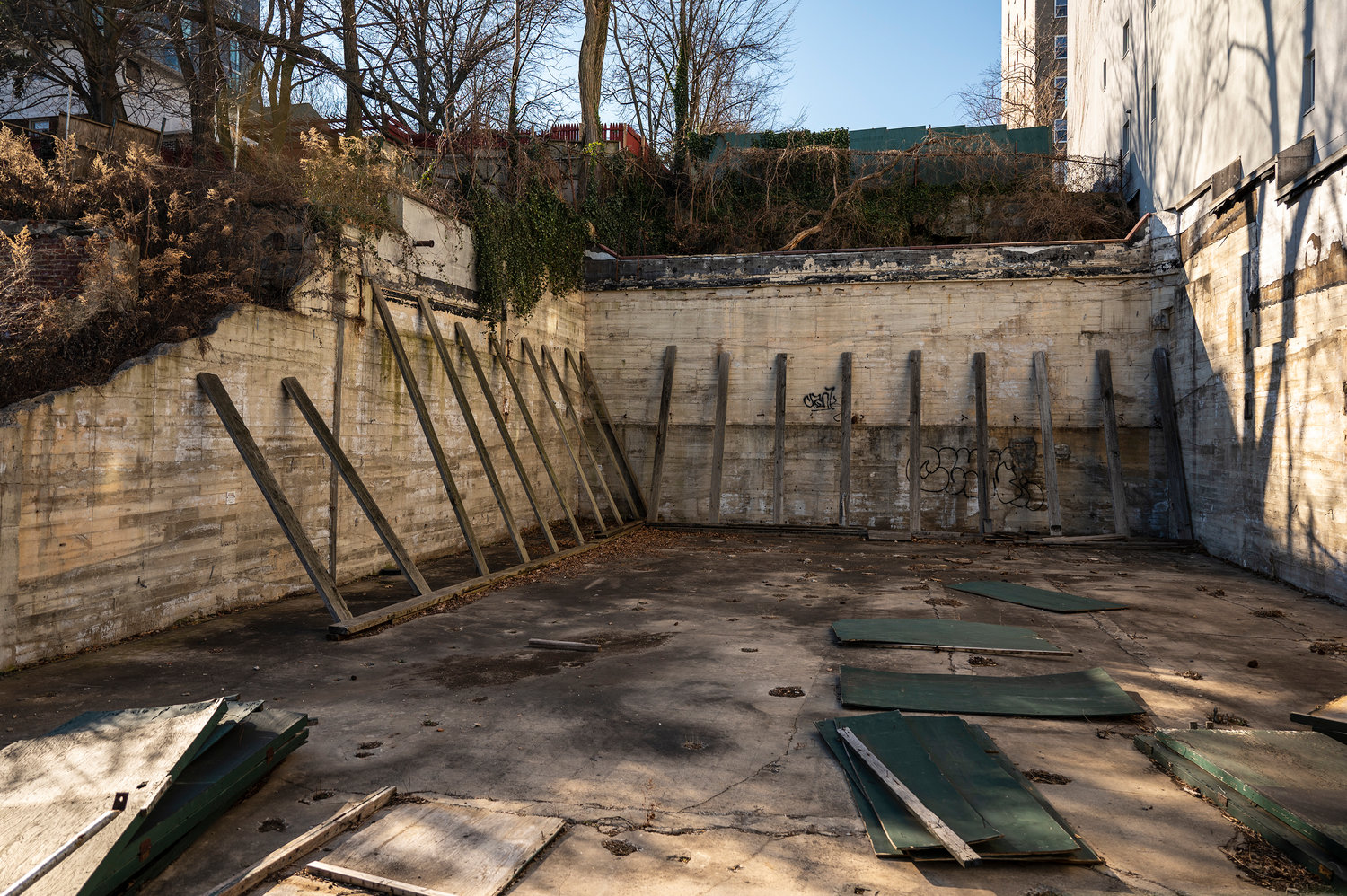 A vacant lot at 3745 Riverdale Ave., is finally going to be filled, but with exactly what is why neighbors are bracing. Stagg Group — one of the most active apartment builders in this part of the Bronx — has taken over the site that was once the center of a showdown between Montefiore Medical Center and the surrounding neighborhood.
HIRAM ALEJANDRO DURÁN 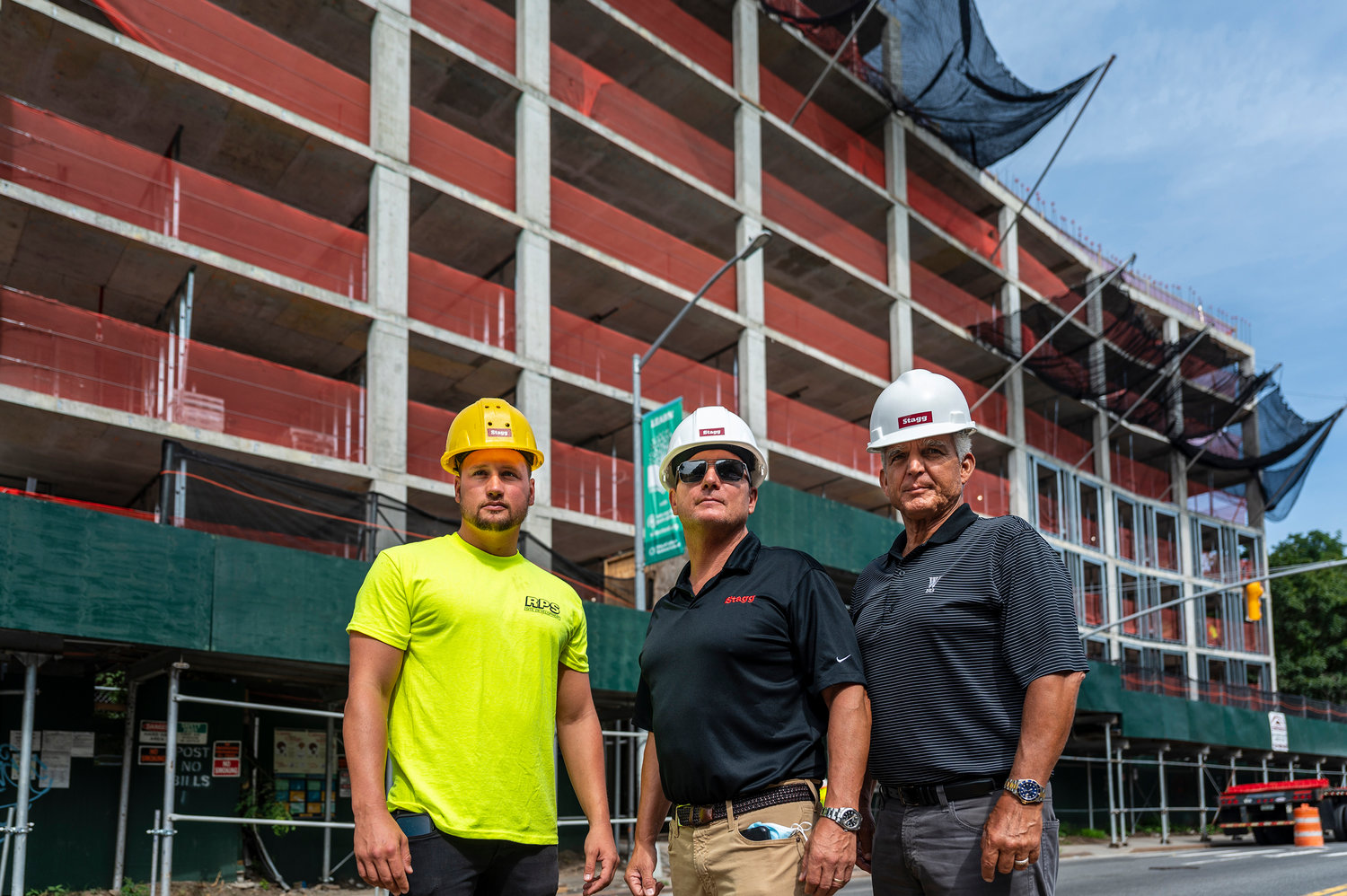 Ryan Stagg, left, joins Mark Stagg and Jay Martino from the balcony of their 5278 Post Road apartment construction project last year. The Stagg Group has been one of the most active developers in this part of the Bronx for the last decade, known for rescuing other development projects that just never came together. The group is poised to do that yet again — this time at 3745 Riverdale Ave. — which they hope to build an apartment complex where Montefiore Medical Center once planned to build medical offices.
HIRAM ALEJANDRO DURÃN/ File
Previous Next
Support journalism

It was a gaping hole in the middle of a Riverdale retail district between a medical office building and a Greek restaurant that seemed to memorialize that neighborhood’s most prolific battle.

At one time, Montefiore Medical Center was keen to build a 10-story health care facility there. But many of the neighbors would have none of it, ultimately convincing Assemblyman Jeffrey Dinowitz and then-state Sen. Jeffrey Klein to legislate such plans out of existence.

It was a victory that left an empty lot as spoils. But it’s a victory no more.

Stagg Group has taken over the prime real estate at 3745 Riverdale Ave., but it’s not a 10-story medical building it wants to build. Instead, neighbors are about to see a 15-story residential tower — complete with 71 units — rise from the dirt.

For Mark Stagg, the developer’s founder and chief executive, it’s about time for a change in the heart of Riverdale.

Of course, it’s not what everyone wants. And Stagg says he’s well aware of the ongoing objections to development there from neighbors like Jim Grossman. Yet, he’s ready for the pushback his company may have to deal with in the face of opposition.

And it’s already started with excavation. To build his tower, Stagg would need to remove a significant amount of bedrock from the site’s foundation. And that could be problematic.

“There won’t be any blasting,” the developer said. “We’re going to drill it, and we’re going to hammer it. Just like we did on Broadway.”

That is, 6299 Broadway — where the road meets the Henry Hudson Parkway — that required Stagg’s team to remove what seemed like a mountain of rock within weeks last summer.

Knowing how controversial this Riverdale Avenue lot has been in the past, Stagg hopes his record of adding more homes to the community will help him gain trust and confidence from his neighbors. Especially since many may not be happy with anything he does on the site.

“We know it’s an inconvenience no matter what,” Stagg said. “Rock removal can be inconvenient for everybody, so our idea is to get in and out as quickly and professionally as possible.”

For Grossman, the whole ordeal is déjà vu all over again. That’s because Grossman previously led the organized effort to stop the previous owners, Simone Development, from building the Montefiore tower back in 2016.

Grossman and his neighbors had succeeded in at first reducing the structure from 14 stories before erasing the project all together.

His complaints were simple: traffic, traffic, traffic. Especially when it was time to leave at the end of the day, and the only exit from the parking garage was onto Riverdale Avenue.

Traffic remains an important component of his opposition to the Stagg project — but Grossman has other concerns, too. Concerns he hopes to bring up with Community Board 8’s land use committee next week.

“What does affordable housing exactly mean in terms of the rents?” Grossman asked. It’s a question the land use committee chair Charles Moerdler would like to know himself.

Moerdler points out that particular neighborhood already has a high volume of traffic thanks to another nearby residential building, The Loft, which uses a parking lot where people come in and out all the time.

Moerdler’s also concerned about how construction would impact surrounding businesses, most of which are restaurants — a commercial vertical that has suffered in recent years.

“You have a bunch of very active restaurants that are not doing great in the pandemic,” Moerdler said. “We’ve got to make sure that we do nothing to exacerbate their problem.”

But Stagg says times have changed over the last several years. The sentiment about building on the property is different now.

“I think the overall temperature of the community is that we can’t have an empty lot with construction boards,” Stagg said. “That doesn’t do anybody any good.”

Like many of Stagg’s buildings, the Riverdale Avenue site is expected to feature luxury apartments — with 30 percent of them intended to be affordable — which will allow Stagg to take advantage of the city’s 421a tax abatement program. That’s a total of 21 apartments the developer says will be available for lower-income families.

“In the end, new housing units are always a positive thing,” Stagg said.

And that positive is something he hopes will win out with neighbors, and not turn into the same mess it did several years ago — all beginning with Monday’s land use committee meeting, which starts at 7 p.m.

“We have to grow as a community,” Stagg said. “This will create jobs and we’re always excited to create jobs.”