MTA heralds what it calls a faster bus service 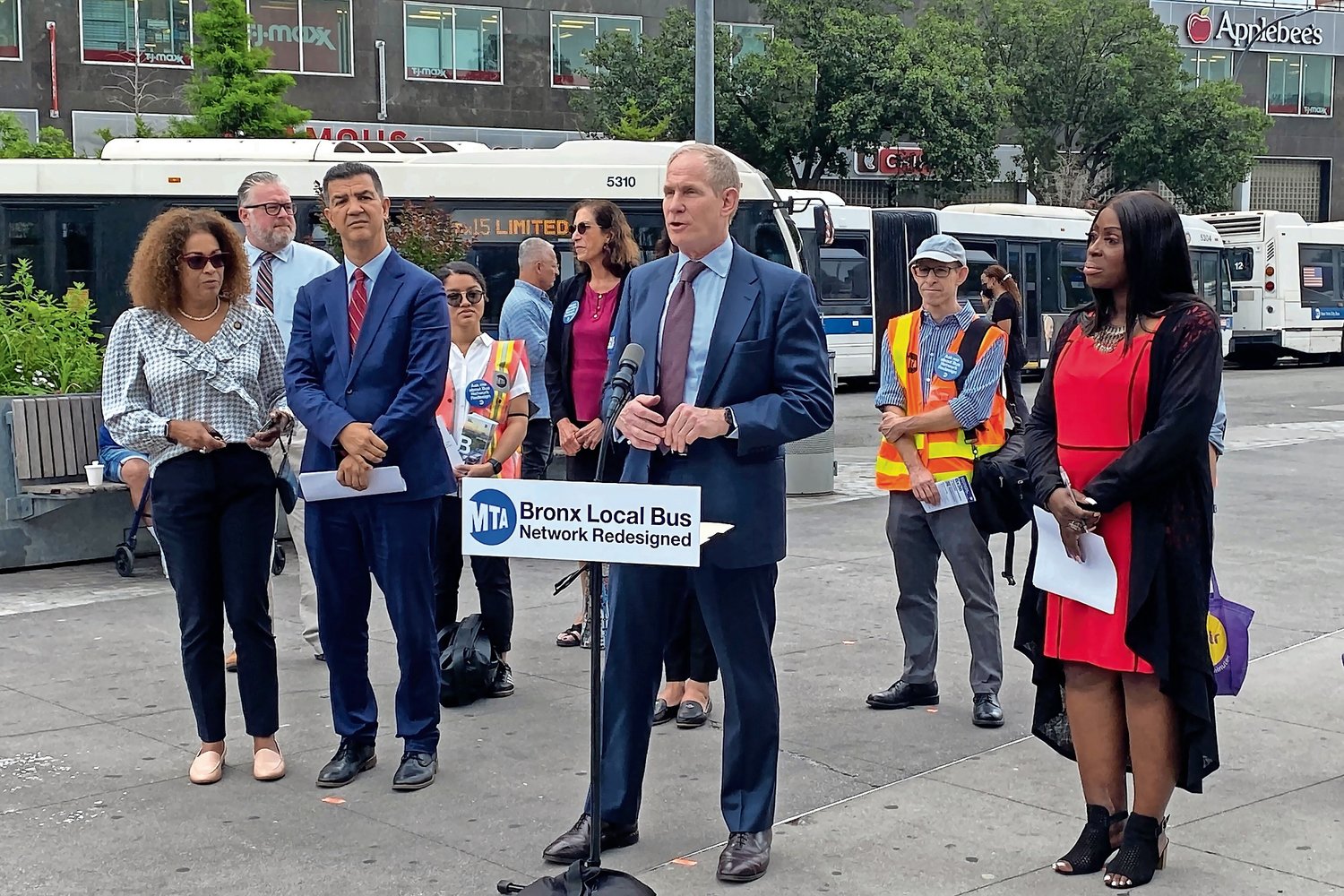 Faster buses in the Bronx. Can you imagine it?

Most riders might have seen a change in their commute last Sunday as Metropolitan Transportation Authority’s buses finally took themselves out of the slow lane.

However, the only change riders in the northwest Bronx saw was fewer stops as the MTA cut a small percentage of them. Its purpose? It hopes to increase ridership by increasing the average distance between stops.

That is what MTA chair and chief executive Janno Lieber promised New Yorkers during a June 21 news conference. The MTA calls the plan the “Bronx Local Network Redesign.”

According to a MTA summary — bus ridership dropped on the average weekday from 2.1 million in 2019 to 1.1 million in 2020. The BX1 and 2 dropped nearly 40 percent in the same amount of time.

However, in May the MTA reached a post-pandemic milestone as nearly 24 million rode the subway or a bus citywide in a workweek.

But this is not enough to keep the ridership steady. And that’s why the MTA has an official new bus map.

The MTA changed 13 routes and launched two new ones. Maybe now most commuters will arrive at work and school on time, if not earlier.

“We do have this challenge because there’s a lot of people who might be on a bus that didn’t lose a lot of stops,” said Deb Travis, chair of Community Board 8’s traffic and transportation committee.

Commuters in the northwest Bronx won’t have trouble finding their bus stop with the new timetable.

Local and limited will not change since the line is already a straight and direct route that connects several destinations.

Four of the 92 stops have been dropped.

Six Broadway stops were dropped going north and southbound along with one “move” on West 185th Street northbound  West 168th Street on St. Nicholas Avenue will be dropped southbound towards George Washington Bridge.

There is one less stop, which gives an extra 13 feet of distance between East Mosholu Parkway and Bainbridge Avenue going northbound. Van Cortlandt Avenue East is southbound on this route.

The MTA map shows that stops primarily close together were a target of removal. Stops were once hundred several feet away from each other.

“That’s not a lot, but they’re still fairly close,” Travis said. “They’re about four blocks away from each other. If you’re in a wheelchair or a senior, yeah it’s a lot.”

Buses are vital, especially for seniors who rely on them when they don’t live close to the subway, which was the purpose of the redesign.

Lieber said in a press conference on June 21 that this plan ensures commuters have equal access to the subway and reliable transit.

In order to accomplish this, the MTA re-examined every local, limited and express bus route.

The MTA inherited a bus network that had not changed since the early 1900s, when trolley lines and bus companies existed.

Danny Pearlstein, a spokesperson for the transit advocacy group Riders Alliance, says he is excited to experience improvements from the MTA. The alliance is an organization that consists of riders of the bus and subway to fight for better transit.

“Our buses are the slowest in the country,” Pearlstein said.

MTA data shows the agency’s rate of “service delivery” remained steady at 98 percent since March during peak hours in the Bronx. Bus speeds were on a rocky road from 2021, going 7.6 mph to 7.5 mph in 2022.

“The more we (the city) can put buses ahead of cars, we can get riders home, and” reclaim all that valuable time for bus commuters.

The city’s transportation department partnership with the MTA is designed to speed up bus lanes. New protected bus lanes are in the works as enforcement to keep cars out of those lane increases.

“The purpose of bus cameras are not to make money for the MTA and the city, it’s to keep bus lanes clear for riders,” he said.

To catch drivers who use the bus lanes the DOT and MTA has two cameras for each bus lane.

They can be at fixed locations and mounted on a bus.

If a vehicle is parked, driving, or standing in a dedicated bus lane, the bus takes a picture of the vehicle and its license plate number. The vehicle has up to five minutes to move until another violation is given from another bus.

One of the DOT’s bus priorities is to build protected bus lanes that would prevent or drivers who try to drive in the bus lane.

“Residents seem positive and optimistic about this,” Pearlstein said. “I’m a Bronx bus rider, and because I live in Manhattan, I’m looking forward to this, too.”