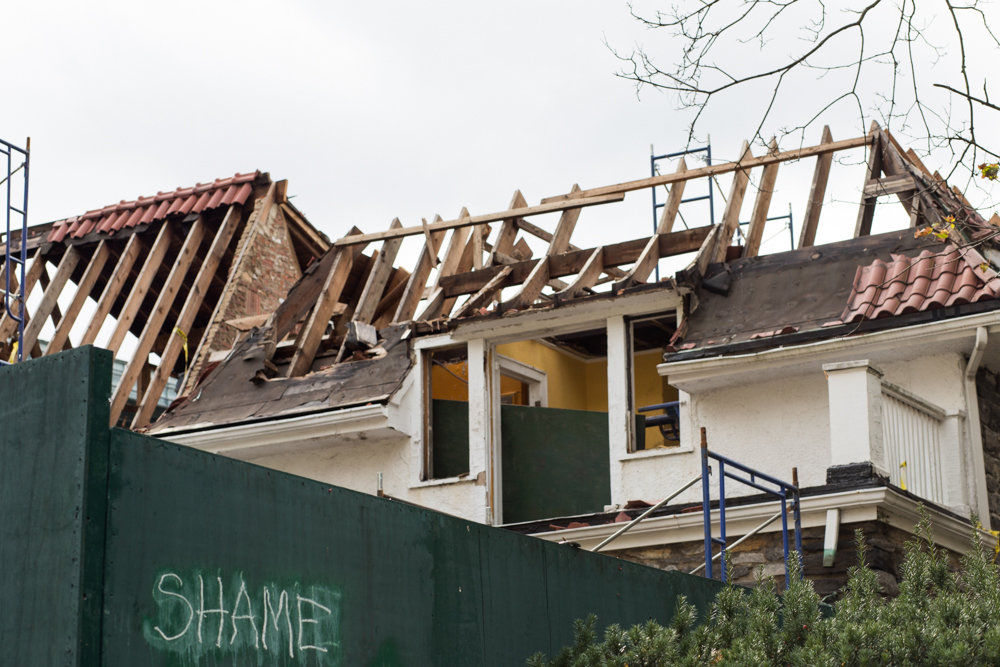 Many have called for major changes to how New York City approaches new development — especially when such development comes at the cost of existing structures, like Spuyten Duyvil’s Villa Rosa Bonheur. Yet, many on Community Board 8 aren’t convinced city council Speaker Corey Johnson’s ‘Planning Together’ initiative is the right way to go.
JULIUS CONSTANTINE MOTAL / File 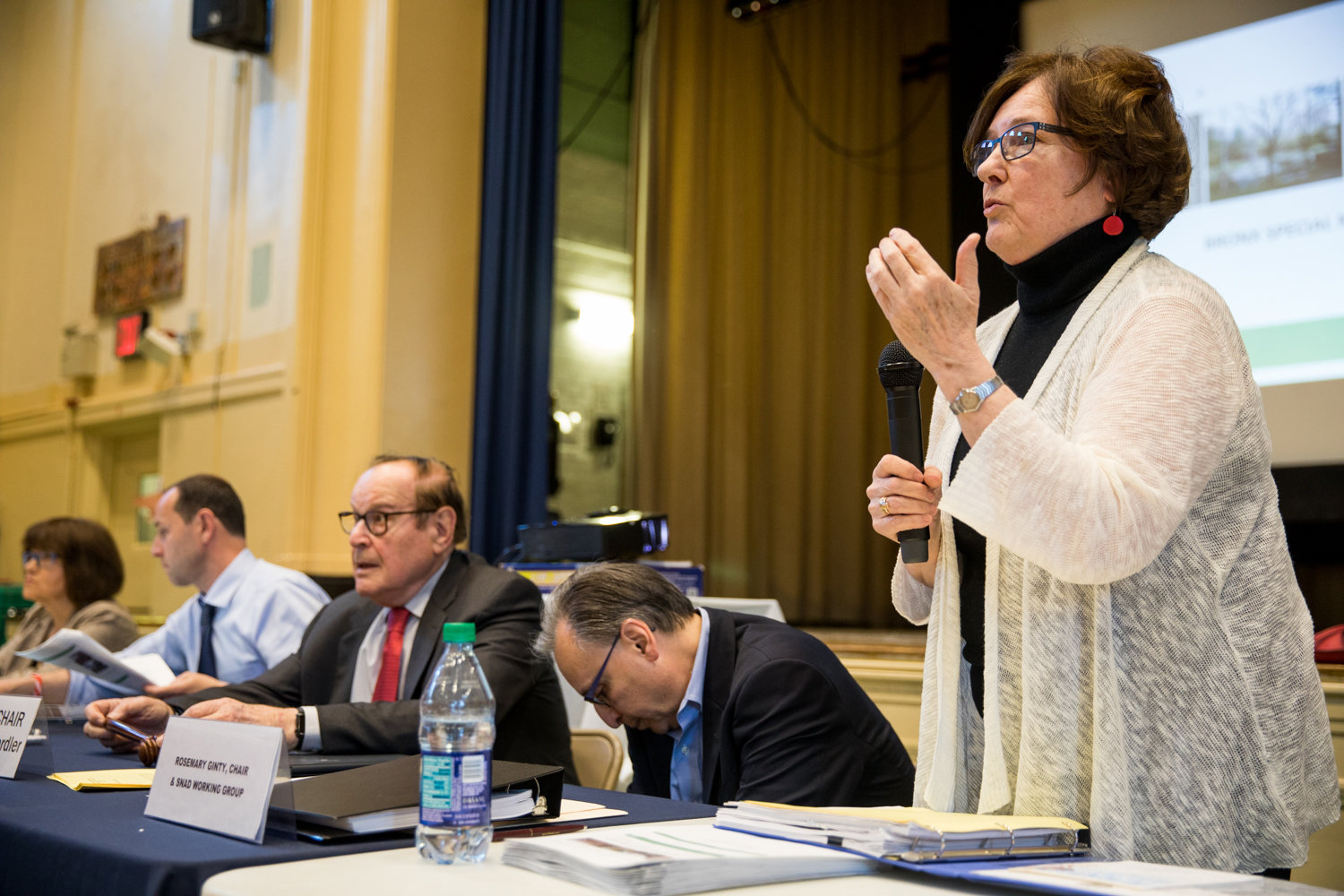 Former Community Board 8 chair — and former attorney with the city’s planning department — Rosemary Ginty decries city council Speaker Corey Johnson’s ‘Planning Together’ initiative because she fears it puts decision-making power in the hands of the city council, rather than with the mayor.
JULIUS CONSTANTINE MOTAL / File
Previous Next
By MICHAEL HINMAN

Charles Moerdler has never considered himself a “top-down” kind of guy. At least when it comes to government at the hyperlocal level.

So why anyone would think he’d support city council Speaker Corey Johnson’s bill he says would overhaul community planning from the mayor’s office on down is beyond him. And Annie Levers, an assistant deputy director of the council’s strategic initiatives office, would certainly have her work cut out for her trying to convince Moerdler and the rest of Community Board 8’s land use committee otherwise.

Yet, Levers tried to do exactly that Monday night in her pitch backing Johnson’s “Planning Together” initiative, also known as Intro 2186. Community planning is a mess, she said, and an overhaul like this is exactly what New York City needs.

“The city’s planning mandates, in our opinion, are insufficient,” Levers said. “They’re scattered. They’re confusing. And this leads to inefficiencies on how the city sort of operates, and a lack of coordination between city agencies. Our planning regime is purely reactionary, and there are few meaningful opportunities for communities to proactively plan their futures together.”

The legislation would help New York City have what virtually every other major metropolitan area has depended on for years — a full-scale comprehensive plan, deciding what kind of construction goes where. Because of that, Levers said, there’s no real strategy to create affordable housing, to rebuild deteriorating infrastructure, and even to deal with climate change. Many coastal neighborhoods could be flooding every day at high tide by 2100 because of sea-level rise.

Of course, many community boards — including CB8 — have developed 197-a plans, essentially micro-comprehensive plans that don’t carry the weight of law, and are typically ignored by city planning officials.

“The city’s piecemeal sort of project-by-project approach to rezonings, we believe, has exacerbated inequality,” Levers said.

Johnson’s push for an overhaul is not some effort to create some legacy in a lame-duck year, she added. Instead, the Speaker first championed reform during the 2019 charter revisions. When those efforts failed, he decided to push for changes to local law.

Because of that, who makes what decisions won’t be changed, Levers said. That can only be done through a charter referendum. Instead, Johnson wants to streamline the process, in hopes of building a comprehensive plan that is indeed comprehensive — and cohesive.

“The proposal creates a process for communities to proactively weigh in and prioritize the issues that we see affecting our neighborhoods every day, but may not raise to the level of priority for a given mayor,” Levers said. “So it would set citywide and neighborhood-specific goals in partnerships with other elected officials, community boards, community stakeholders, and members of the general public, instead of just leaving all of that solely in the hands of the mayor.”

Yes, part of that proposal would include helping community boards develop new localized comprehensive plans — but that’s only for boards not happy with their existing plans, she said.

It also would revamp the city’s long-term planning steering committee away from one almost completely controlled by the mayor, to one that represents the mayor, the city council, and the five borough presidents.

“It’s really envisioned as a technical body with requirements for appointees to represent groups and individuals who have been historically left out of planning decisions in the past,” Levers said. “They would help set the city’s long-term citywide infrastructure targets. Not just for housing, but schools, open space, resiliency, sewer capacity, arts and cultural space, job creation, transit, infrastructure, public health — all based on assessments of current conditions and community input.”

Moerdler, however, isn’t interested in changing anything in the planning process unless it starts at the neighborhood level and works its way up.

“You need to have a mandatory mechanism to assure that the voice of the community is heard, whether you accept it or disagree with it,” Moerdler said. “The final say would be whatever the citywide entity is, but then it is finally heard. During the last eight years, that has been a rarity. It just hasn’t happened.”

Rosemary Ginty, a former CB8 chair who worked in the past with the city’s planning department, says many of the problems when it comes to planning stem from confusion between what the mayor’s office does, and what the city council is responsible for.

“I view this proposal as the legislative branch stepping into the shoes of the executive branch, and quite frankly, it scares me,” Ginty said. The power to make decisions won’t change, Levers said. Instead, Johnson’s legislation would simply emulate what other major cities put together — not just in developing a comprehensive plan, but ensuring it has some teeth.

“The mayor would still be in control of most everything,” Levers said. “They would actually be responsible for actually putting the plan together. And this sort of input and approval process is designed based on what works well in other cities to actually build consensus.”

Intro 2186 is far from being a finalized bill, but its key components are indeed in place, Levers said. Still, Levers and others from her department are visiting many of the community boards, seeing where aspects of the bill can be changed and maybe even improved.

But the most effective way to govern is something Moerdler believes the city council can find here in the Bronx. He cites efforts by former Bronx borough president Fernando Ferrer who tried to create transit hubs on the eastern side of the borough at the local level, only to fall short. It wasn’t until he joined the Metropolitan Transportation Authority some years later that the Metro-North stations through that part of the Bronx finally became a reality.

“It’s an example of how when you have bottom-up and top-down planning together, it works,” Moerdler said. “I don’t know a damn thing about Brooklyn, but I know a fair amount about the Bronx, and Queens, and Manhattan. And I live in the Bronx. So I know about it, and everyone on this Zoom at the moment does as well. So think about how you do (that kind of planning), and how you can do it for this legislation.”