Nearly 5,000 have died in facilities across New York 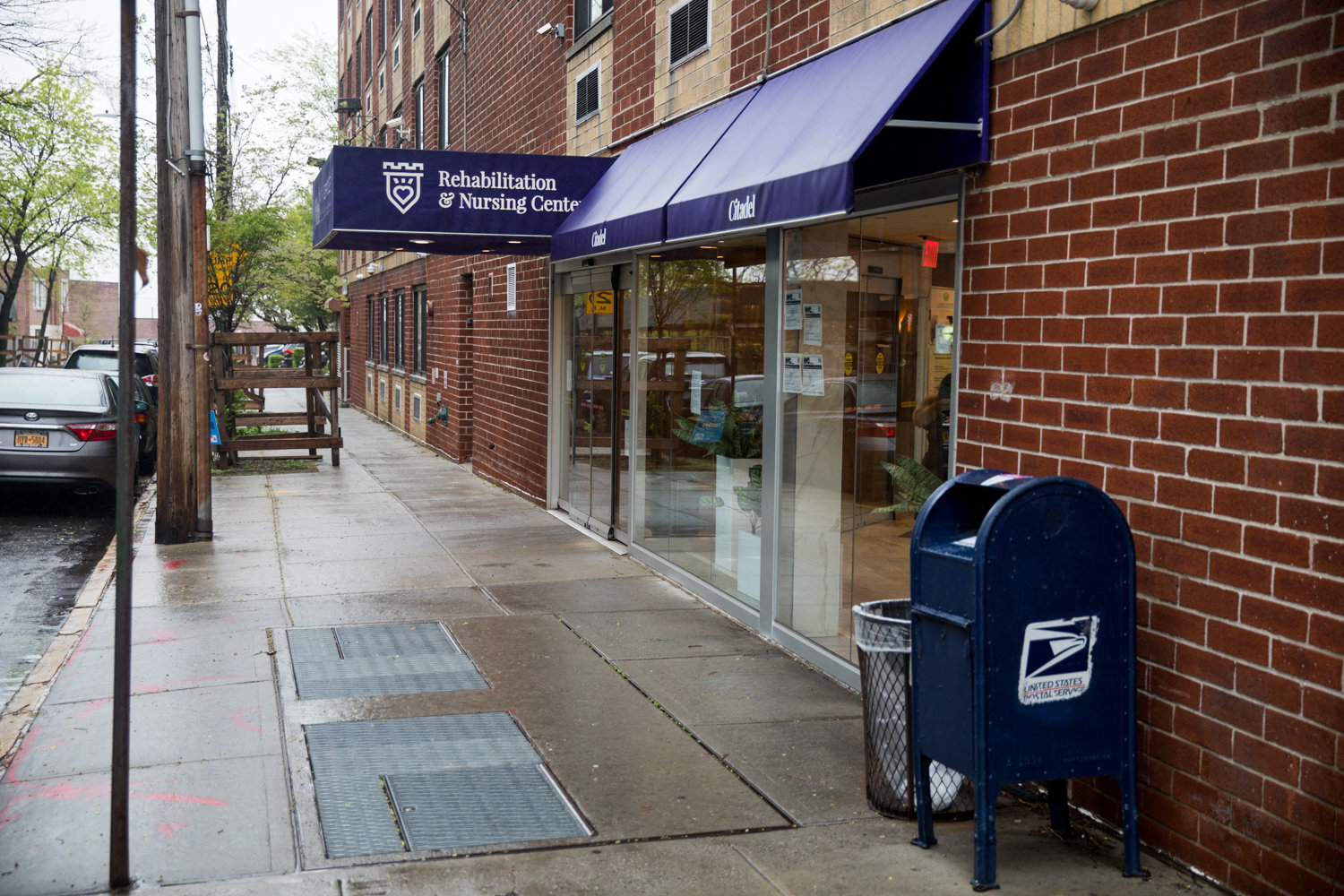 Citadel Rehabilitation and Nursing Center at Kingsbridge, which as of early last week, had 50 confirmed and suspected deaths related to complications of COVID-19.
JULIUS CONSTANTINE MOTAL
By MICHAEL HINMAN

The power of one. Generally a concept with positive connotations, talking about how any one person can make a difference.

But there’s a flip side to that, especially when it comes to nursing homes and adult care facilities. And it’s one few of us care to even think about. But Gov. Andrew Cuomo must, especially in the middle of a pandemic.

“That coronavirus, if it figures out a way to get in there, all it takes is one person,” Cuomo told reporters during his daily briefing on Tuesday. “One staff person, who doesn’t have a temperature. Who is not symptomatic. One facility person. One person who comes in to work on the air-conditioning system. All it takes is one person to bring the virus in there. You do everything you can, but at the same time, you can’t do everything.”

Cuomo’s words came just hours after the state’s health department broadened its public reporting of deaths related to COVID-19 at nursing homes and adult care facilities. Now these institutions are breaking out numbers of confirmed coronavirus cases and suspected ones — and the numbers aren’t pretty.

There have been 222 confirmed deaths in Bronx nursing homes and adult care facilities between March 1 and May 3, according to the report. But include suspected cases, and it skyrockets to 630 — behind only Queens and Brooklyn.

The new report gives details about 39 nursing homes and adult care facilities in the Bronx — compared to just 11 listed up until this past weekend. It also has expanded the data to include not just confirmed deaths related to COVID-19, but suspected ones as well.

Including suspected deaths has created a new leader in the borough. Before Tuesday, Kings Harbor Multicare Center in Pelham Gardens led the Bronx with 46 deaths, followed by The Plaza Rehabilitation and Nursing Center on Kingsbridge Road with 36. The new report changes that, however. The Plaza now has 58 deaths — nine of them confirmed — to lead the borough, followed by 54 at Kings Harbor, with 46 of those deaths confirmed to be related to COVID-19.

Citadel Rehabilitation and Nursing Center on Cannon Place in Kingsbridge Heights had been mostly off the radar in past nursing home reports. But with the revised data, it’s now the third hardest-hit nursing home in the Bronx when it comes to COVID-19. While it has only two confirmed deaths related to the virus, 48 others there in recent weeks are suspected to be from COVID-19 complications.

Schervier Rehabilitation and Nursing Center on Independence Avenue and St. Patrick’s Home on Van Cortlandt Park South round out the borough’s top five with 40 and 35 deaths respectively, although only 25 from the two local facilities are confirmed.

Other facilities now on the list as of May 3 include Fieldston Lodge on Kappock Street and the Hebrew Home at Riverdale on Palisade Avenue with 15 reported deaths each. Hudson Pointe at Riverdale Center for Rehabilitation and Nursing on Henry Hudson Parkway has 13 deaths, three confirmed.

The state also added three Bronx adult care facilities to the list, with two of them nearby. RiverSpring Assisted Living on Palisade Avenue has six confirmed deaths related to COVID-19 complications, while Atria Riverdale on Henry Hudson Parkway has one reported death.

Health department officials note that these figures only represent deaths that happened within each facility, and does not reflect residents who were taken to hospitals. It also includes data that has been collected since March 1, when the initial confirmed cases of coronavirus began to show up in New York.

The Plaza and Citadel — which account for 108 deaths related to COVID-19 in the borough — are both operated by Brooklyn-based Citadel Care Centers, as is Hudson Pointe at Riverdale. Another Citadel-owned facility in the borough — Bronx Gardens Rehabilitation and Nursing Center in Belmont — has 17 deaths, four of them confirmed.

Executives at Citadel did not return a request for comment.

While it might be easy to start casting blame on why the virus is claiming so many lives in nursing homes, those casting stones must also consider everything that is being done in these facilities to help curb infection and spread, said Adam Geller, an administrator at Park Gardens on Broadway. He shared some of his overall observations and opinions in a Point of View column publishing this week in The Riverdale Press.

“We had been in the trenches for two months — preparing, treating, getting sick, and dying for residents — and what was never mentioned was the concept of asymptomatic carriers in health care facilities,” Geller said. “The fact that a resident or staff member could have the virus that causes COVID-19, show no symptoms, and unwittingly spread it around a facility was what made the fight even harder.”

Many community residents — especially those neighboring the various nursing home and adult care facilities here — have paid extra attention to the number of times ambulances come and go. Some have pushed lawmakers, community leaders and even journalists to look deeper at what’s happening in those facilities.

Eric Dinowitz, chair of Community Board 8’s aging committee, did not return a request for comment. Although his committee is only advisory, Dinowitz — who also is a candidate for city council in 2021 — did not make specific reference to the coronavirus in his April meeting agenda.

The committee did talk about food programs and such with senior centers in the wake of the pandemic, according to the prepared minutes of that meeting, but nursing home issues themselves did not appear to be addressed.

The current councilman, Andrew Cohen, says seeing these kinds of numbers means something must change when it comes to nursing homes in the city.

“There needs to be a real examination of the nursing care model to strengthen and protect against the inherent risks of exposure that render our nursing home communities particularly susceptible to this kind of crisis,” Cohen said, in a statement. “The tragedy that has unfolded in these facilities has shone a harsh spotlight on the need for new models of nursing care better positioned to protect this group of vulnerable New Yorkers, and the people who care for them.”