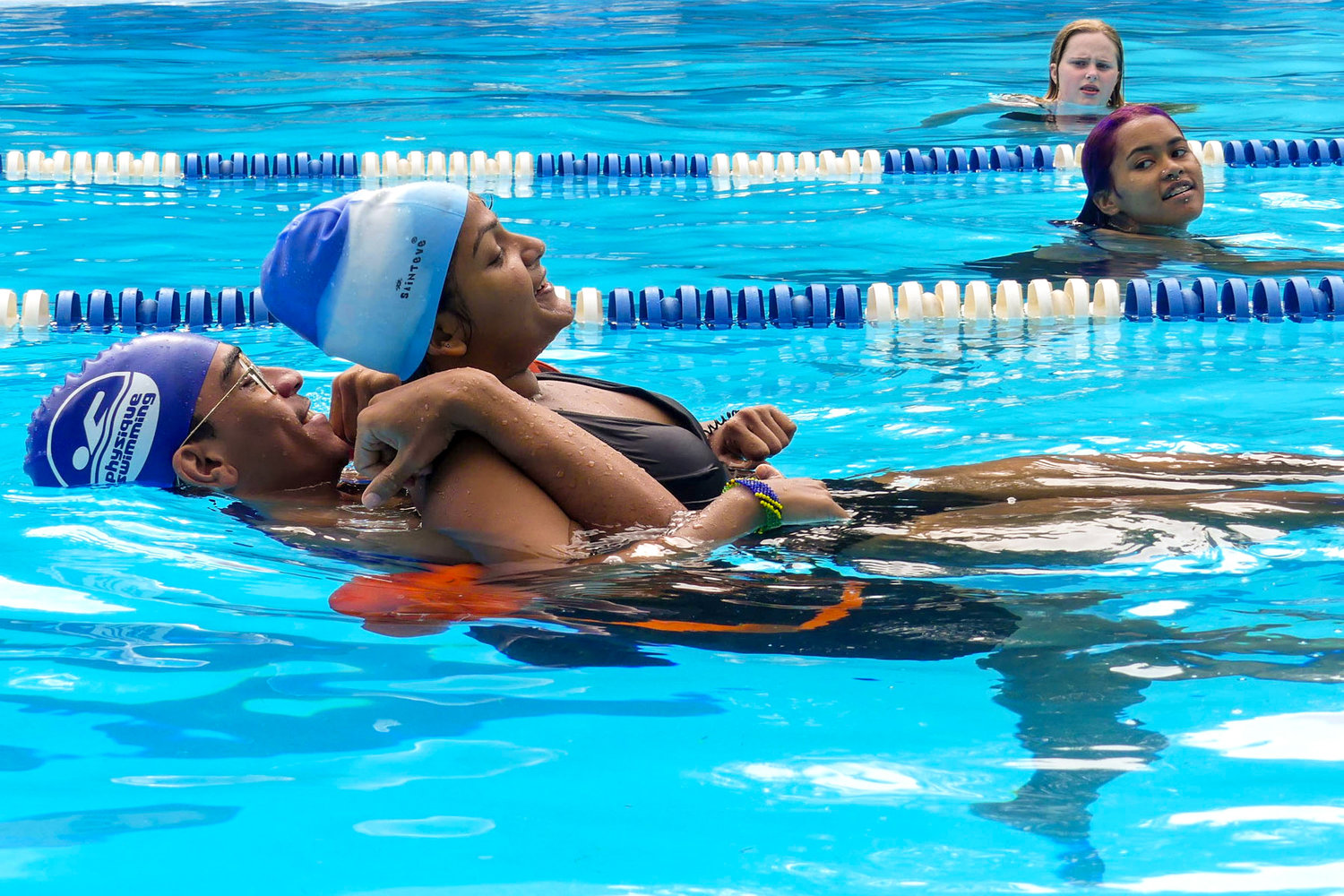 The Riverdale Neighborhood House started a lifeguard class to help the community during the national lifeguard shortage. The American Red Cross class calls for students to spend 27 and half hours shaping themselves into lifeguards.
AISSA SISSOHO 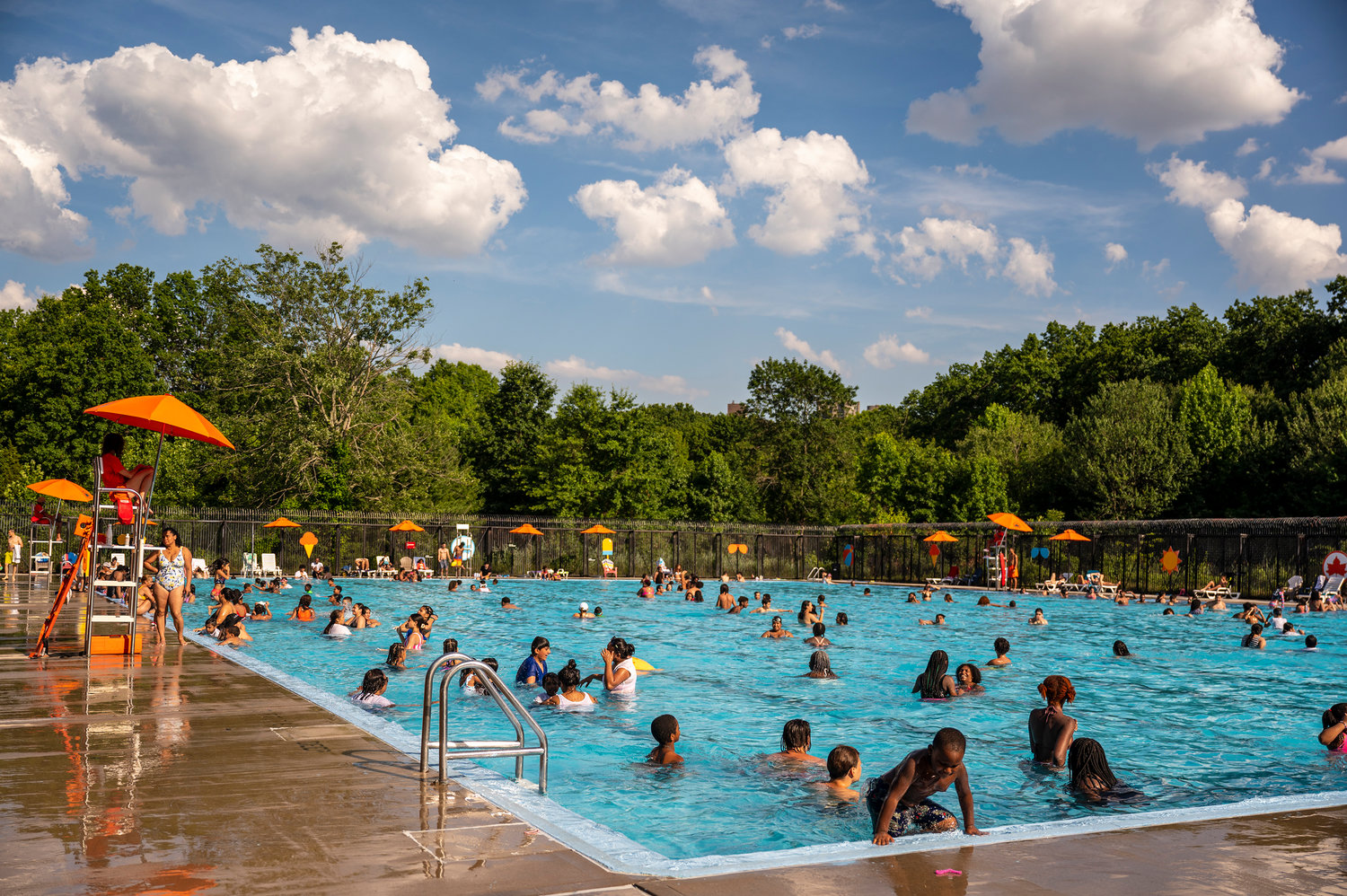 Van Cortlandt Park outdoor community pool is open for swimming. However, their programs are not. All swim programs, including lap, senior, and learn to swim, have been canceled for the summer because of the national lifeguard shortage. The parks department also altered pool hours.
Hiram Alejandro Durán
Previous Next
By Stacy Driks

Jonathan Antigua has been wearing red and carrying a whistle for 15 years but not as a fashion statement. He plans to pass along the uniform to six lifeguard trainees this weekend.

“Because of the lifeguard shortage, I thought I could help out,” Antigua said. “I’m trying to get people certified.” Antigua learned how to become a lifeguard with the American Red Cross and he recently took it to the next level in March, when he earned his lifeguard instructor license.

He says the amount of lifeguard instructors in the northwest Bronx is scarce due to  the national lifeguard shortage. Pools around greater Riverdale have also felt the impact of that shortage, especially at the public pool.

The American Lifeguard Association says the national lifeguard shortage hit community pools the hardest. Residents of the northwest Bronx found their neighborhood pool in Van Cortlandt Park would no longer accommodate educational swimming lessons and exercise programs for the summer due to the shortage.

“Our goal is to always offer as much swimming access as possible — we are happy that our number of open pools increases daily, despite the recruitment challenges we have faced due to the national lifeguard shortage,” said Dan Kastanis, New York City Parks press officer.

The shortage forced Van Cortlandt Park to cancel some of its many pool programs this summer. As of July 1, pool hours were split into five separate sessions to provide access to more patrons.

“It’s not for our own benefit,” said Emma Pollack, director of community programs at Riverdale Neighborhood House. “We heard there was a need for lifeguards in the community.”

The pool house recognized the shortage of lifeguards in the community and decided to take action.

“The shortage is coming after two years of COVID where they (certification classes) were already restricted and shut down,” Pollack said.  With the hot part of the summer upon us and the increase in travel due to inflation, some people want to stay home more and take advantage of the local pool.

“When we became aware of the shortage, we started to work towards getting the training going,” said Nancy Alberts, development manager of Riverdale Neighborhood House.

Community pools reached out to Alberts and her team about their shortage, and then they saw what and where the need was for lifeguards.

Although the most recent session ended, there is still a chance to apply for the second training session on July 30. More information can be found on their website RiverdaleOnline.org/news

The program can accommodate 20 students as there are two lifeguards for 10 trainees. It cost $400 for the public while there will be a discount for Neighborhood House pool members.

“As the mayor recently announced, we are also elevating, for this summer alone, lifeguard pay to $19.46 per hour,” Kastanis said. “And to ensure our beaches and pools are guarded all summer long, we will pay a retention bonus in September to guards who work every week through the end of the summer session.”

Despite the program’s cost, the new certified lifeguards will have an easy time finding employment because the community and residential pools are desperate for new lifeguards.

“Many of my students ask me ‘where do I apply?’” Antigua said.

He helps them find pools near their house that are looking for lifeguards.

Before the pandemic, there was never a problem finding lifeguards, including high school students, according to Antigua.

“During the pandemic, there were no lifeguard courses, but the Red Cross did extend lifeguard certificates, but eventually they just stopped recertifying and students never went back (for new classes),” Antigua said.

That meant new people were not being trained and, since they could not renew their license, those people needed to find another way to support themselves. Most found higher-paying jobs in retail and hospitality as things opened up through the year.

Antigua and the rest of the team from the Riverdale Neighborhood House are dedicated to certifying as many lifeguards as possible due to the drowning rate.

“We’re hoping to do more moving forward, but on top of that also think about the resources the pool at RNH offers,” Pollack said.

While lifeguards’ main mission is to prevent drowning, they are helped immensely if children take swimming courses. That is why aquatic specialists teach children as young as 1. In pools, Black children between 10 and 14 drown at rates 7.6 higher than white children.

The number one thing that the American Red Cross ensures the best preventable way to avoid drowning is to learn how to swim.

“This (training) isn’t really for lifeguarding,” Antigua said. “Lifeguarding is there to prevent drowning, and the first thing is learning to swim.”

“At Orchard Beach I had multiple rescues, so I know the importance of being a lifeguard and knowing the skills,” he said.

He stressed the importance of being a lifeguard and to ensure his students know the seriousness of the job.