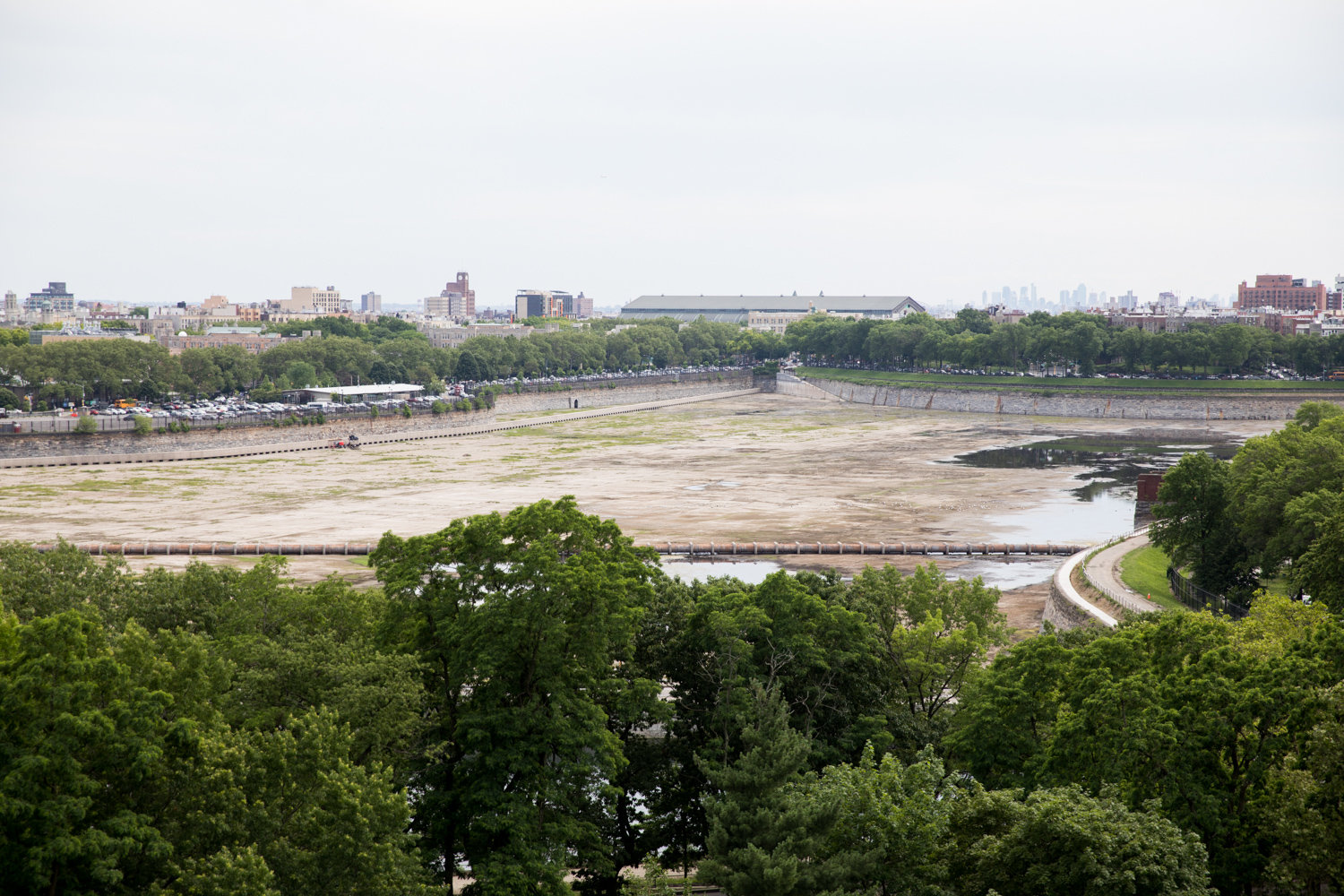 The Jerome Park Reservoir’s south basin has seen better days. Currently empty for repair work, the south basin will be full once that work is complete around 2025, according to the city’s environmental protection department. A full south basin means the north basin will be permanently empty as a failsafe, earning the ire of its neighbors.
JULIUS CONSTANTINE MOTAL / File 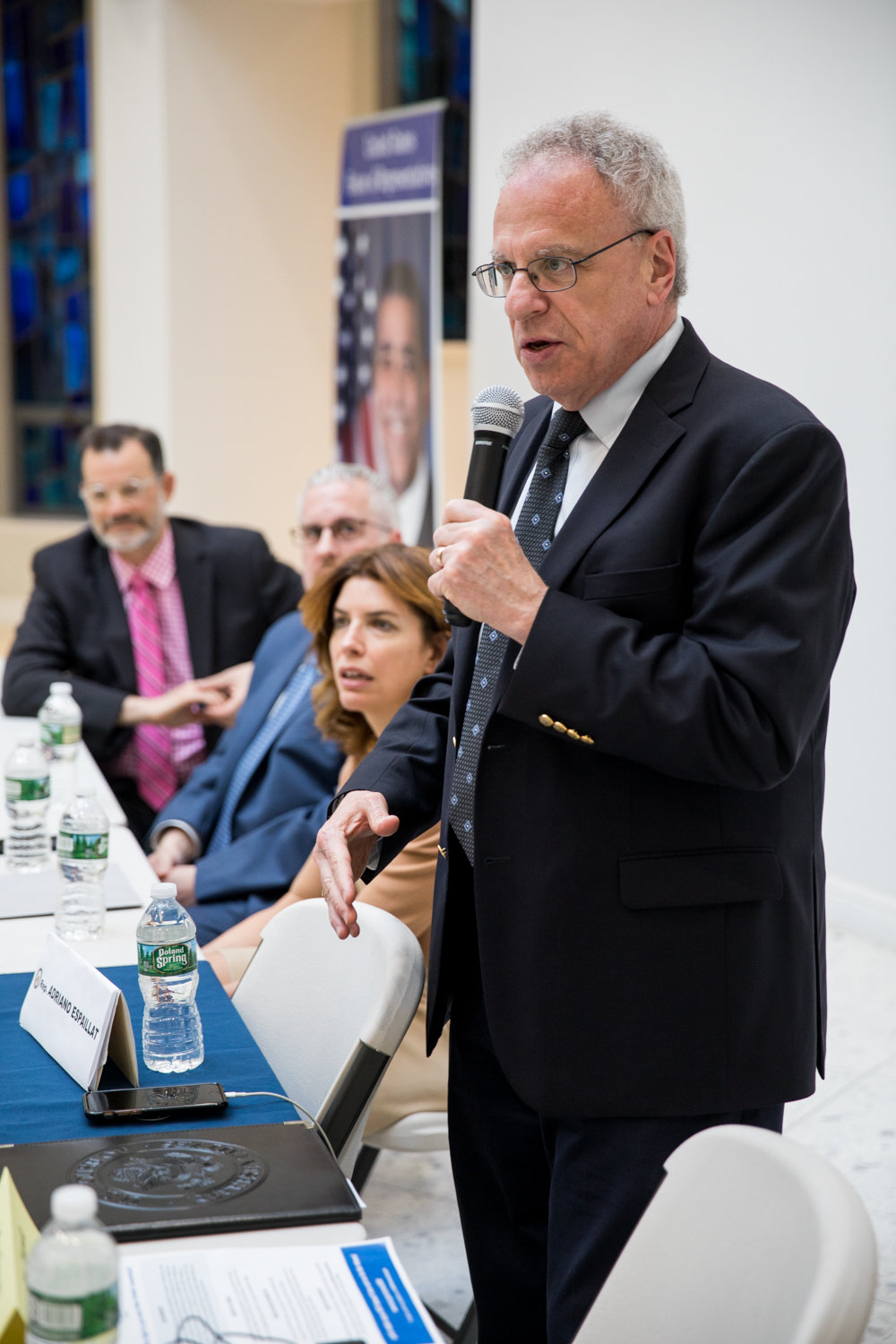 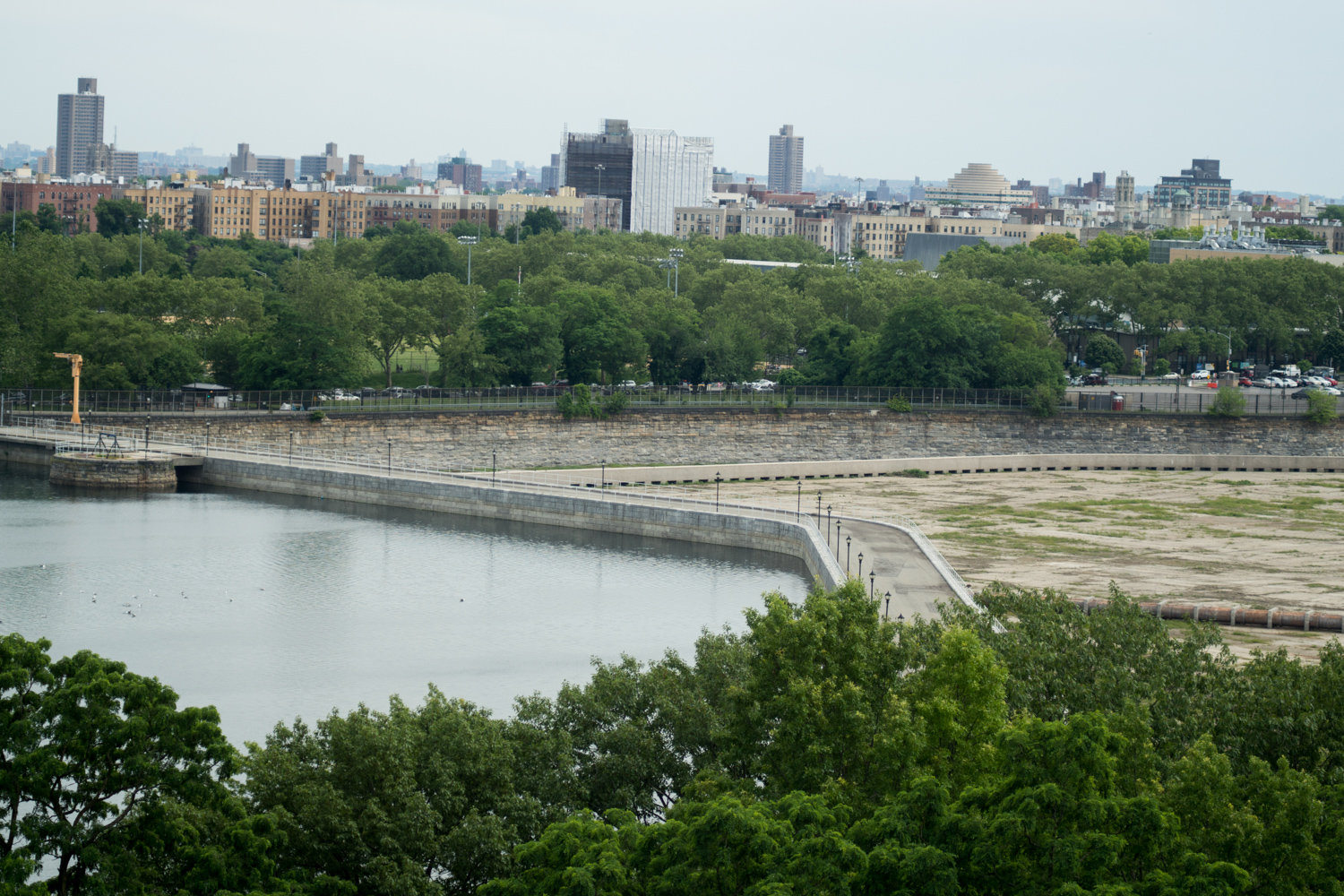 A walkway separates the north basin from the south in the Jerome Park Reservoir, long a contested battleground for residents and city officials. Repair work has left the south basin empty, but once those repairs are complete, it will be the north basin that’s empty, much to the chagrin of neighbors. Community members hoping to voice their concerns at an Oct. 7 meeting left disappointed when the city’s environmental department would not discuss it.
JULIUS CONSTANTINE MOTAL / File 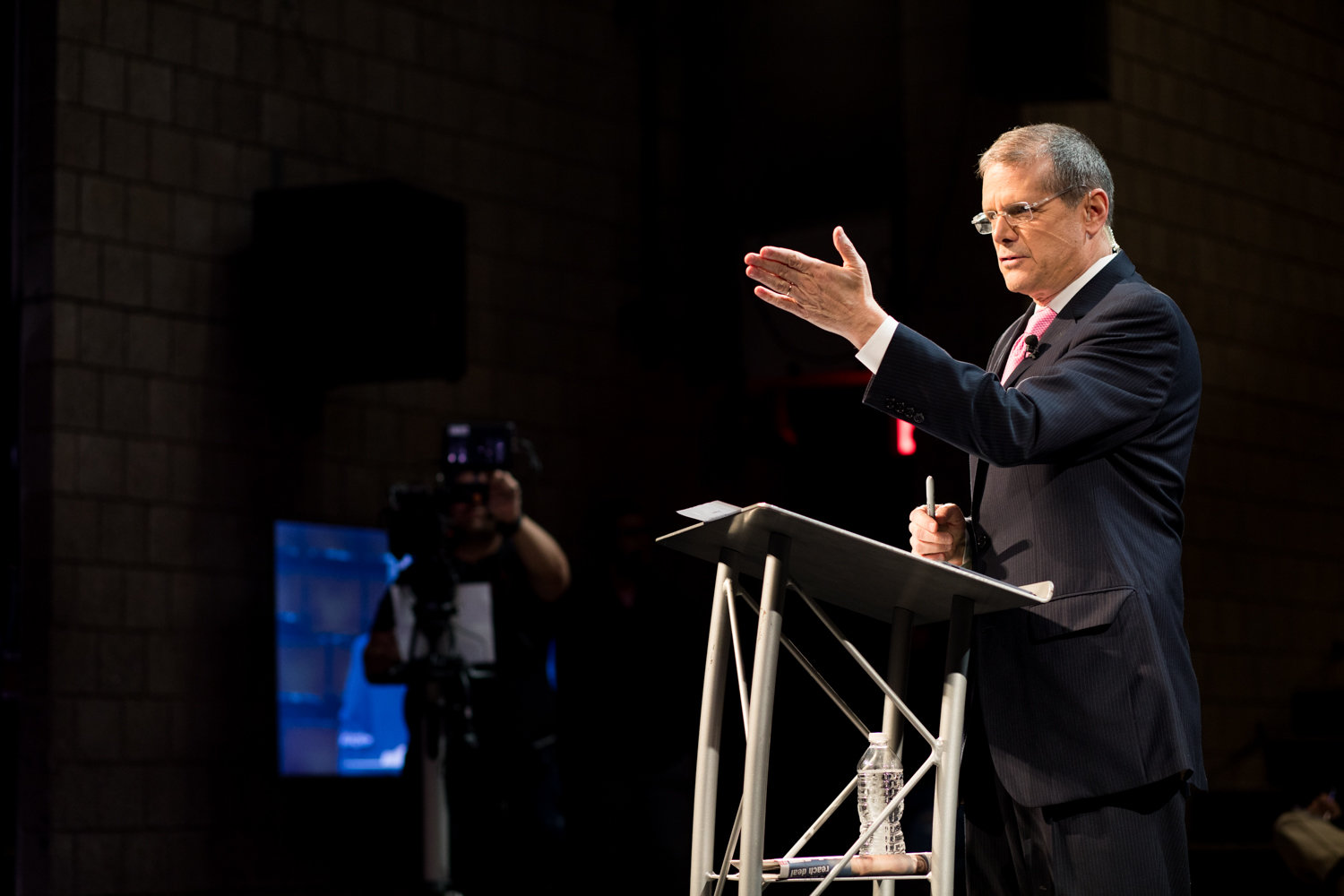 Gary Axelbank, seen here moderating a public advocate debate in February, has long been critical of the handling of the Jerome Park Reservoir by the city’s environmental department.
JULIUS CONSTANTINE MOTAL / File 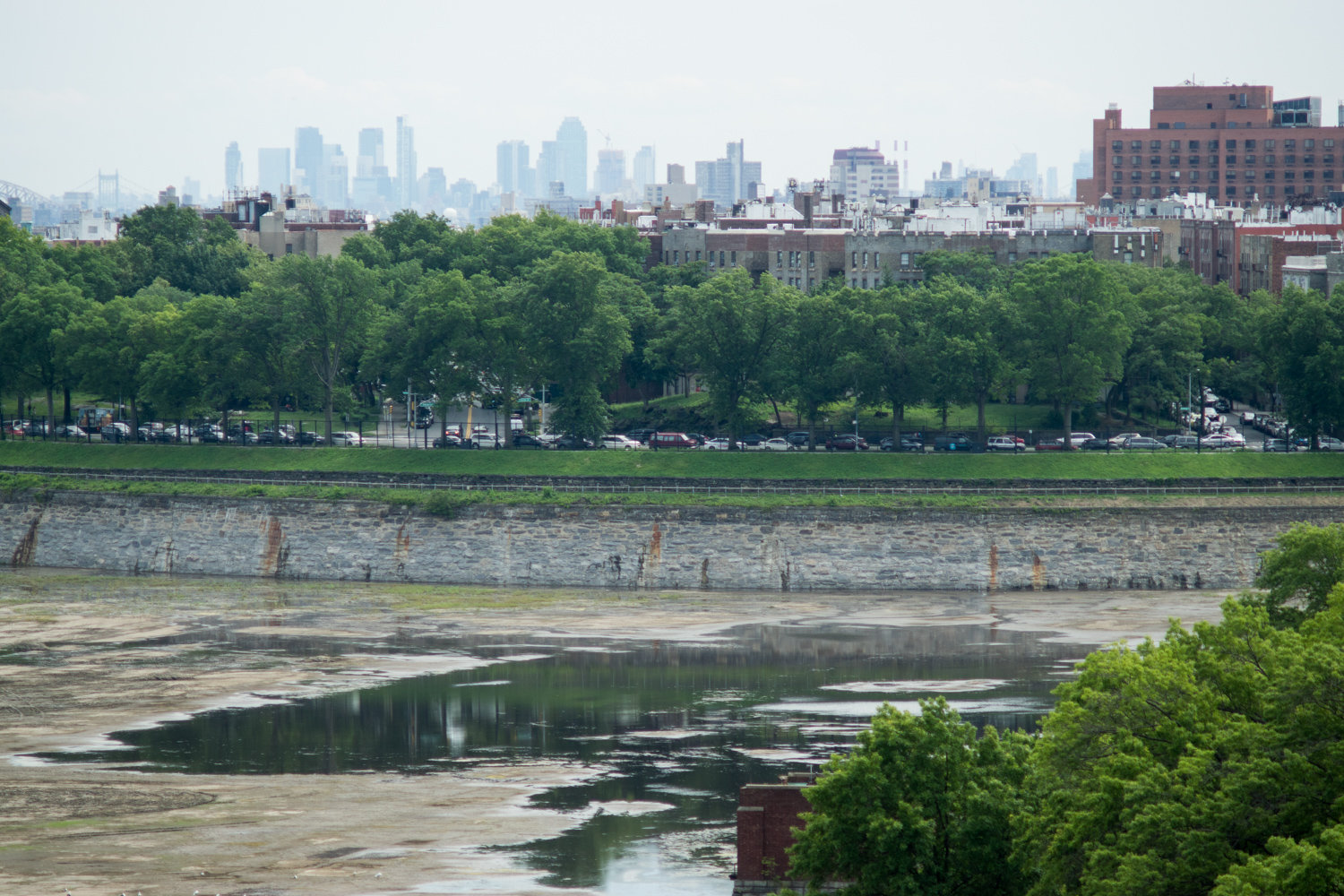 The Jerome Park Reservoir is an ongoing battleground between community members and the city’s environmental department, which plans to keep the north basin permanently empty after repair work on the south basin is finished around 2025.
JULIUS CONSTANTINE MOTAL / File
Previous Next
By HEATHER J. SMITH

The mood was tense at the quarterly meeting of the Croton Facility Monitoring Committee, and Anne Marie Garti had not even brought up Jerome Park Reservoir quite yet.

In fact, several attendees to that Oct. 7 meeting were there for that very purpose, especially after many had heard last summer the city’s environmental protection department would keep the reservoir’s north basin dry just in case there was ever a need for more water capacity at the Croton facility under Van Cortlandt Park.

The news did not sit well with a community that vociferously opposed plans in the ‘90s to cover the historic reservoir with a filtration plant, offices and a parking lot. Today, fences surround the reservoir itself with access restricted as if it were protecting a top-secret military base. Any views of water that ultimately finds its way through New York City spigots and bath tubs already comes from afar. But for anyone living in Van Cortlandt Village, leaving the north basin dry means the view for them becomes nothing more than a dry pit where water should be.

Four months ago, DEP officials told angry onlookers they could discuss the decision at the next monitoring committee meeting. But when the agenda for the October meeting was released, there was no mention of the north basin.

That prompted Garti — a founding member of the Jerome Park Conservancy — to ask why. But not before other failings popping up at the monitoring committee meeting drew the crowd’s ire.

Part of the issue centered around the fact that DEP chose to send employees — and not commission leaders — to answer questions about projects they presented to the monitoring committee. For some in the audience — like reservoir neighbor Gary Axelbank — this just prolongs issues involving Jerome Park Reservoir that already have continued far too long.

“We could have questions answered,” Axelbank said. “Instead, a 20-year project still has people saying, ‘Well, let’s find out.’”

Karen Ellis, who handles community affairs for DEP, started to tell Axelbank she would take the concern back to commissioners, but the longtime BronxNet television host was hearing none of it.

“But they should be here,” Axelbank said, gesturing toward an empty chair at the front of the room reserved for DEP directors.

Ellis promised someone would get back to them with answers. The audience demurred.

“We want somebody here to answer the questions,” said Community Board 8 chair Rosemary Ginty, who represents one of three Bronx community boards represented by the monitoring committee. “We’re not getting responses.”

Ellis assured them someone would be at the next meeting to answer questions.

By then, Garti shared she had a general question to ask: Where was the reservoir discussion? Restoration of the 130-acre facility had been under way for a while, and the June meeting delivered the news the north basin would be permanently drained once work was completed there some six years from now.

Had DEP performed an environmental impact study? If so, what were its findings?

In what had become, at that point, a common refrain, DEP representatives told Garti they didn’t have that information, nor did they know if any contracts were awarded to perform work.

“Any issues that are related to Jerome Park will have to be discussed outside of this meeting,” Ellis said. “Because this is a Croton filtration meeting, we’re here to talk about projects related specifically to this facility.”

Ellis’ response did not sit well with the assemblage. She was pelted with questions the DEP spokeswoman said would be answered — in writing — to both the community and to the committee.

“Here’s what I’m thinking,” said monitoring committee chair William Hall, who also chairs Community Board 12, which includes Woodlawn bordering Van Cortlandt Park. “We reschedule our next meeting. If the DEP commissioner is not here, we will not move ahead with the meeting.”

Doing so would keep the committee from wasting its members’ time, Hall added. It also would send a clear message to DEP leadership that it couldn’t continue to duck questions.

Wasting time has been an unfortunate part of ongoing conflict between community members and the DEP, Garti later told The Riverdale Press.

“Most of the people from DEP there that night are new and don’t know how long we’ve been learning about the reservoir and fighting to protect it,” she said.

“Just like everything else, they don’t consult, they don’t ask, they don’t discuss,” Axelbank added. “They just make up their own minds and tell us what they’re going to do, and you saw that there the other night. They didn’t even show up.”

Karen Argenti wasn’t surprised the reservoir wasn’t discussed during the monitoring committee meeting because she doubts the DEP has any solid plans in place. Their idea of draining the north basin is bad, said the longtime community activist and Bronx Council for Environmental Quality member, and she’d like to see the department’s reasoning in writing to better understand why this project to drain the north basin became imperative after years of status quo.

“Why now? What happened?” Argenti asked. “That’s really the most important question. What happened that made you decide to say that at that meeting?”