Once again they’re gearing up to fight Riverdale Ave. development 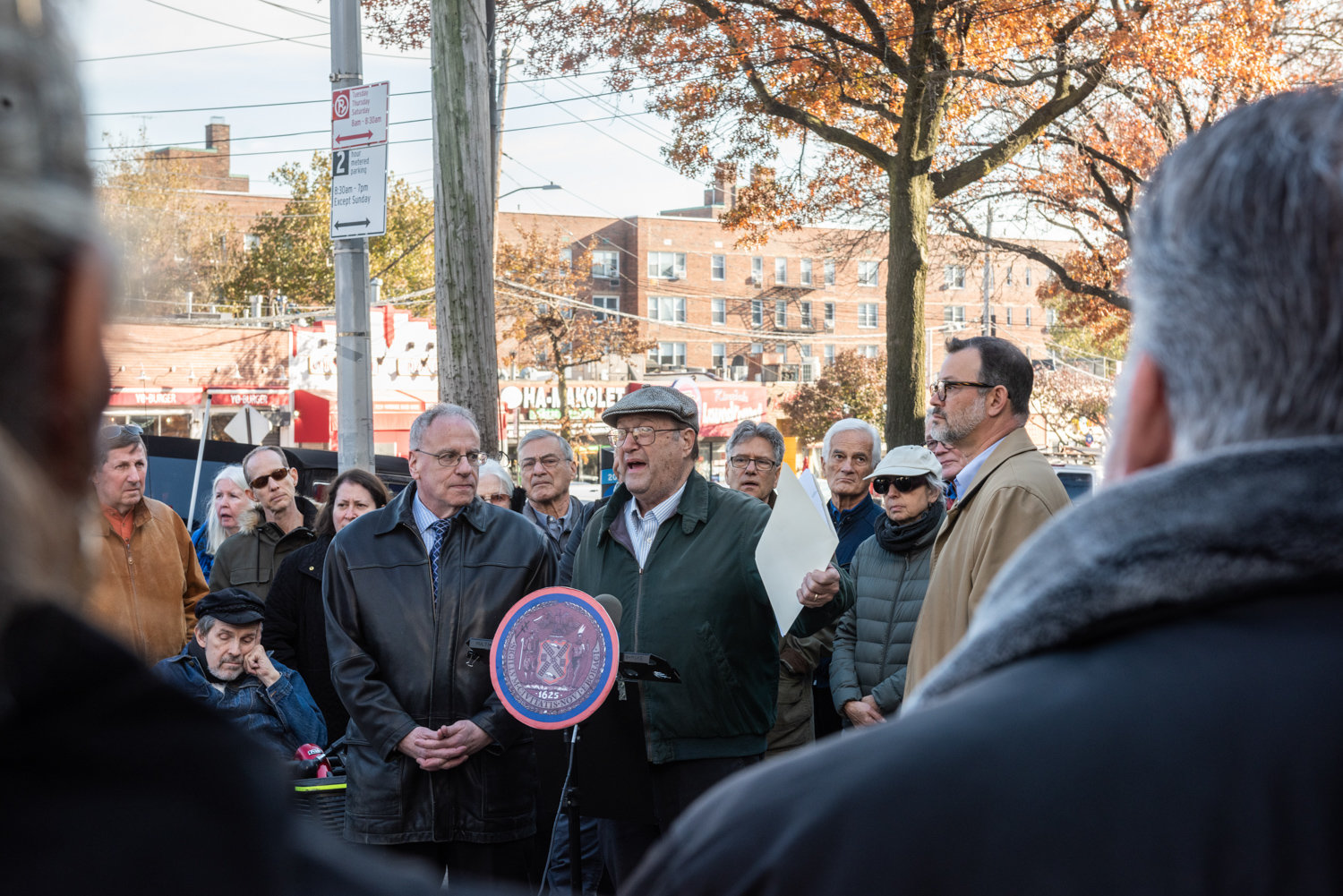 Jim Grossman, who lives less than a block from an empty lot on Riverdale Avenue near West 238th Street, speaks out against Montefiore Medical Center’s reported plan to build a 10-story health care facility there.
NOAH BENUS 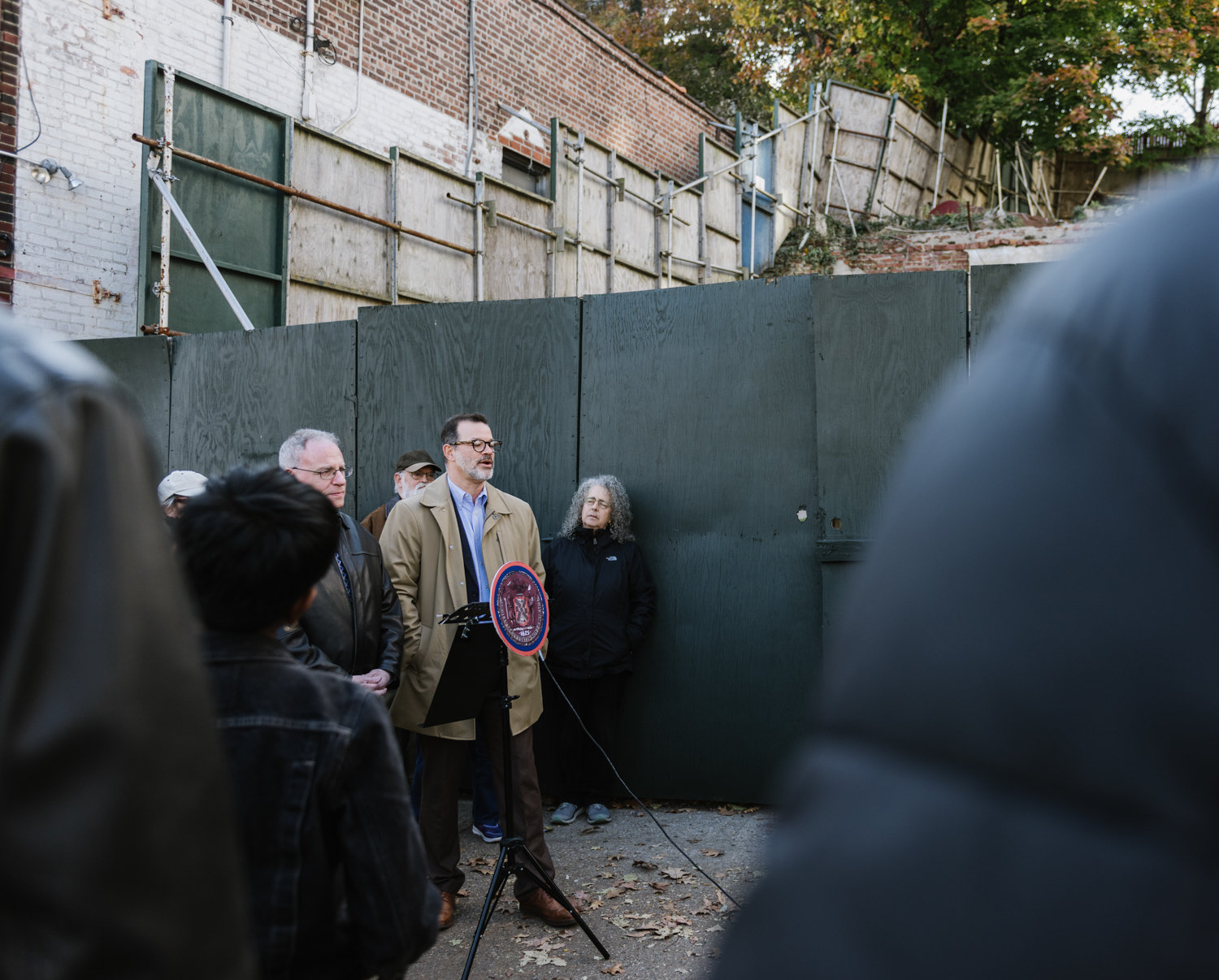 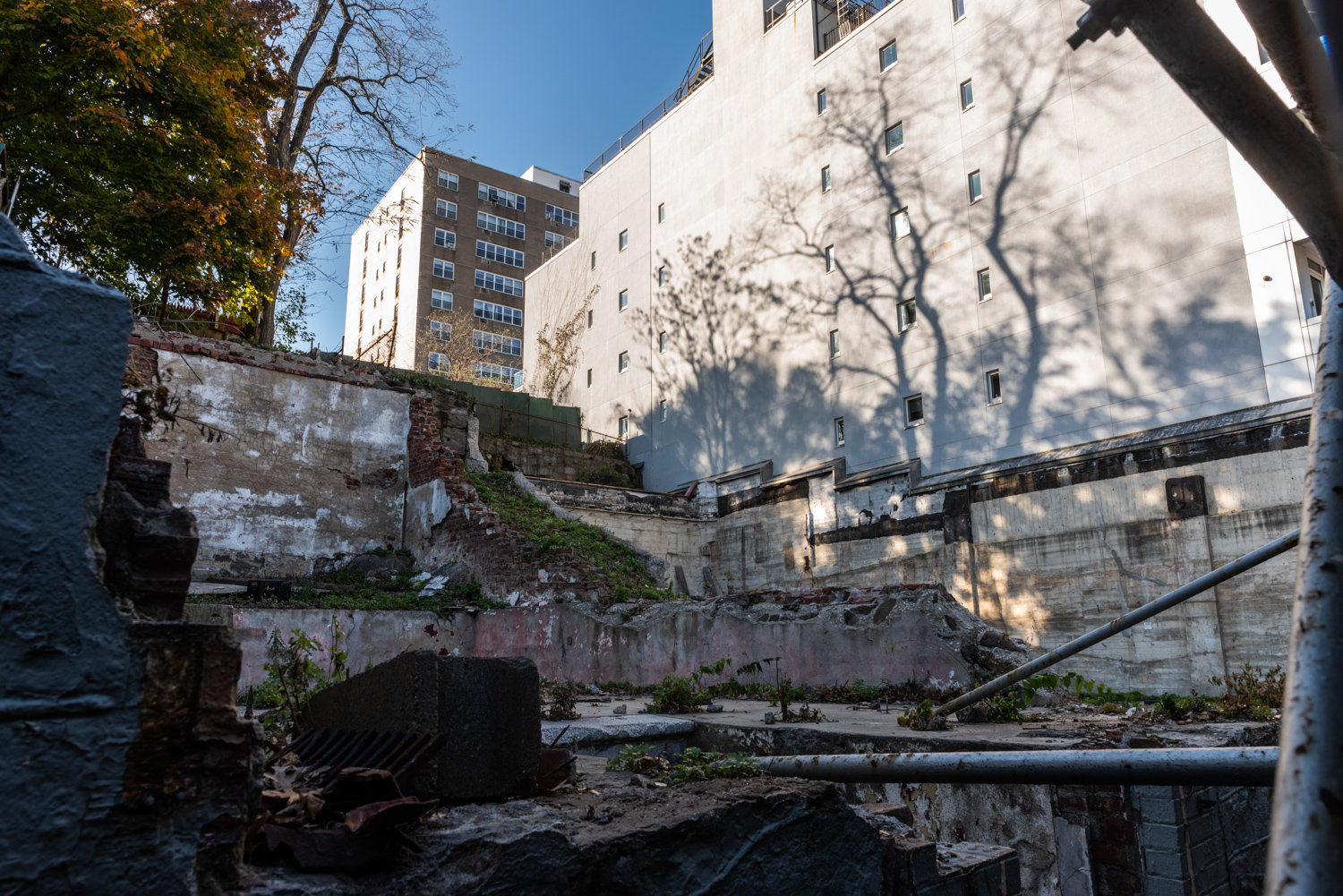 Montefiore Medical Center’s reported plan to build a 10-story medical facility on the empty lot near the intersection of West 238th Street and Riverdale Avenue was initially squashed thanks to the legislative efforts in 2014 of Assemblyman Jeffrey Dinowitz and then state Sen. Jeffrey Klein. Now, Montefiore has revived its plan, but neighbors and elected officials are again voicing their opposition.
NOAH BENUS 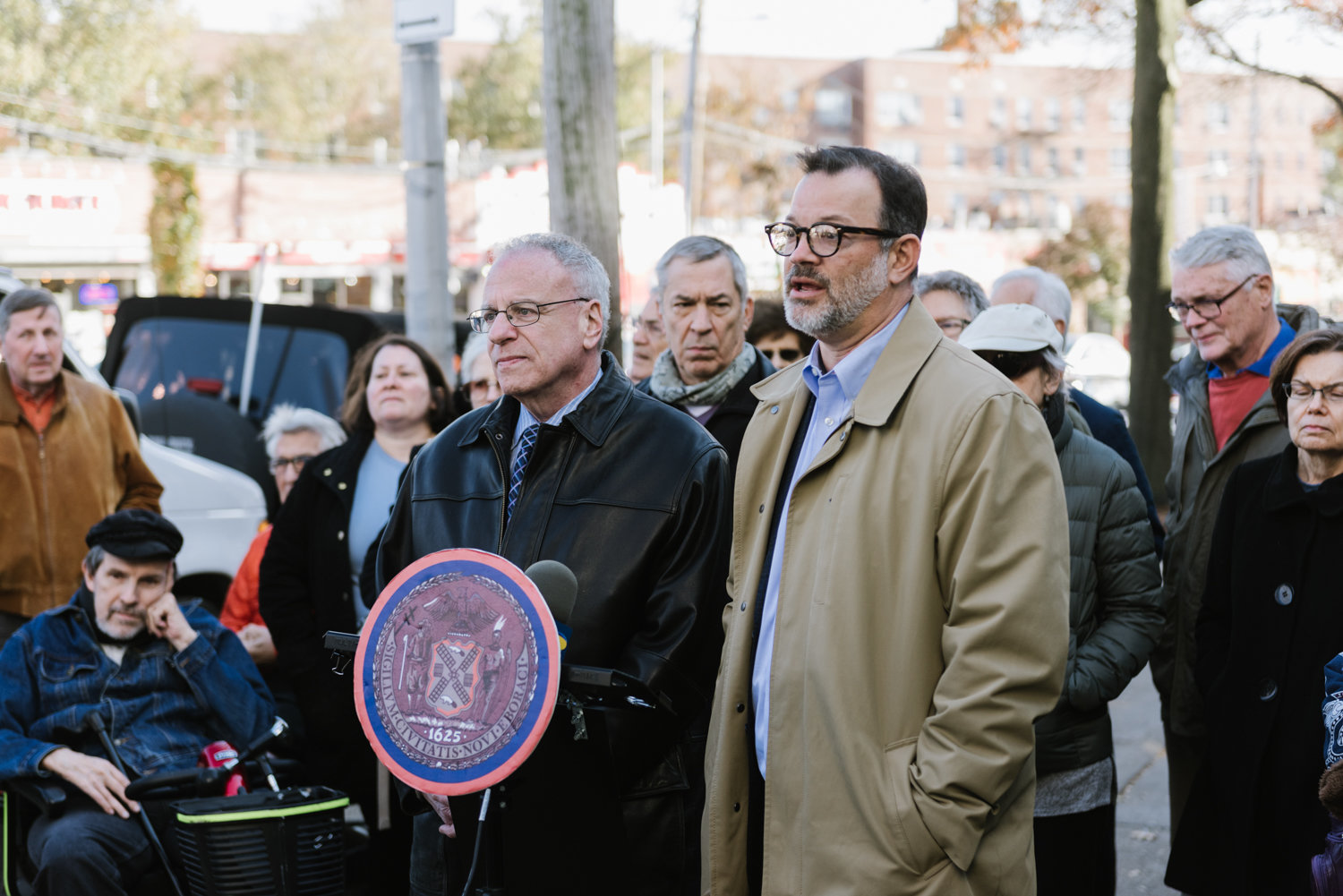 Neighbors greeted each other as they assembled in front of 3741-3745 Riverdale Ave., Friday afternoon. On the other side of the black fence was an empty lot, just as barren as it was when crews demolished the former DJ Drugs location and a neighboring building back in 2013.

It was a reunion none of them really wanted.

“Judy Fletcher, good to see you out here,” said Jim Grossman, who lives just down the block.

“I can’t believe this is starting over again,” Fletcher said, taking his hand.

Others trickled in. “I can’t believe Montefiore’s starting this stuff again,” one said. “They’re like a vampire,” someone else commented. “They just keep rising from the grave.”

Within minutes, Councilman Andrew Cohen and Assemblyman Jeffrey Dinowitz arrived, and standing behind a podium with a small crowd of onlookers blocking the sidewalk, expressed their opposition to a plan most everyone thought was dead years ago.

“I have to say that I am incredibly frustrated and angry that we are here today,” Cohen said. “This community spoke with a clear, united and loud voice that we don’t want a 10-story building here, bringing unmanageable traffic levels, congestion, and really jeopardizing safety and also the cohesiveness of this commercial border.”

Six years ago, Montefiore Medical Center and Simone Healthcare Development announced plans to build an 11-story medical pavilion in the thriving retail corridor just south of West 238th Street, tucked among a number of businesses including eateries and real estate offices. Along with a 200-car parking deck, the pavilion would house various in-patient doctors’ offices.

The announcement was met with vitriolic opposition. Grossman mobilized his neighbors into a group — the Committee to Protect Riverdale — which flooded Community Board 8 meetings and pounded out angry emails to elected officials.

The traffic such a facility would generate could clog Riverdale Avenue in a retail oasis where mom-and-pop barbershops, florists and hardwares thrive, opponents cried. Even scaling the project back to six stories wasn’t enough to appease the neighborhood.

It looked like the project would move forward despite opposition. The companies’ leaders maintained the facility could be built as-of-right, meaning there would be minimal government red tape to prevent their advancement. The Committee to Protect Riverdale — known as CPR — doubled the effort to quash Montefiore and Simone’s plans.

It worked. Dinowitz and then state Sen. Jeffrey Klein passed a state law specifically targeting this project. When it passed in 2015, it made moving forward with the medical pavilion too complicated to proceed, adding layers of bureaucracy. Montefiore backed out.

Simone Development still owned the property, however, and floated the idea of a 14-story, 48-unit luxury apartment complex with street-level retail space. The company hired Newman Design in 2017 and then filed blueprints with the city. Everything seemed set to begin, but nothing happened.

The lot sat empty for two years. The state law that shot down Montefiore’s plan was eventually repealed. Most people thought Simone would sell the land and move on. Other business owners looked at the lot, longing for extra parking to boost their traffic. As the seasons stretched on, the lot faded into the background.

But then, like a phoenix from the ashes, the idea rose again.

Earlier this month, Simone representatives approached CB8 land use chair Charles Moerdler with new plans to partner with Montefiore on a 10-story medical pavilion. Knowing the past public opinion, Moerdler blew the proverbial whistle on the plans. Shortly after Cohen learned of it, he called a news conference.

“I’m really calling on Simone … and Montefiore to commit publicly to say they’re not going to build a 10-story monstrosity on this site again — not now, not ever,” Cohen said.

Dinowitz was equally as strident.

“The first time they tried to force this upon the community that we live in — little consultation,” the Assemblyman said. “They didn’t reach out. They didn’t speak to the stakeholders. They didn’t do anything they should have done until after they already had their plan. And that appears to be what’s happening again.”

Both promised to slow the plans down and grind them to a halt through governmental means where possible.

“Riverdale is adequately served by medical doctors and medical facilities better than almost anywhere in the city,” Grossman said. “You just have to walk up the block to two buildings and you’ll see about five or six, seven or eight doctors right there.”

Other neighbors had their reasons for opposing the facility. Tom Pantazis drives to Queens to see the doctor he prefers and wouldn’t use the new offices one street over from his house. And he feels the bedrock blasting needed to seat a 10-story building would do damage to nearby homes, a sentiment echoed by neighbor Ann Noonan.

“Simone Healthcare has recently communicated with representatives of the Riverdale community to discuss planning for their property at 3745 Riverdale Ave.,” the company said in a statement to The Riverdale Press. “This will be an ongoing process with the community as planning and ideas continue to develop.”

“I accept the fact that this is a buildable lot, and some day, someone’s going to build on it. It would be great if somebody was building something consistent with the way the community is and what the community would like to see.”

CORRECTION: The original medical center was planned at 11 stories, and reduced to six, while a later residential complex was proposed at 14 stories. The original story that appeared in the Nov. 21 issue, provided different information.