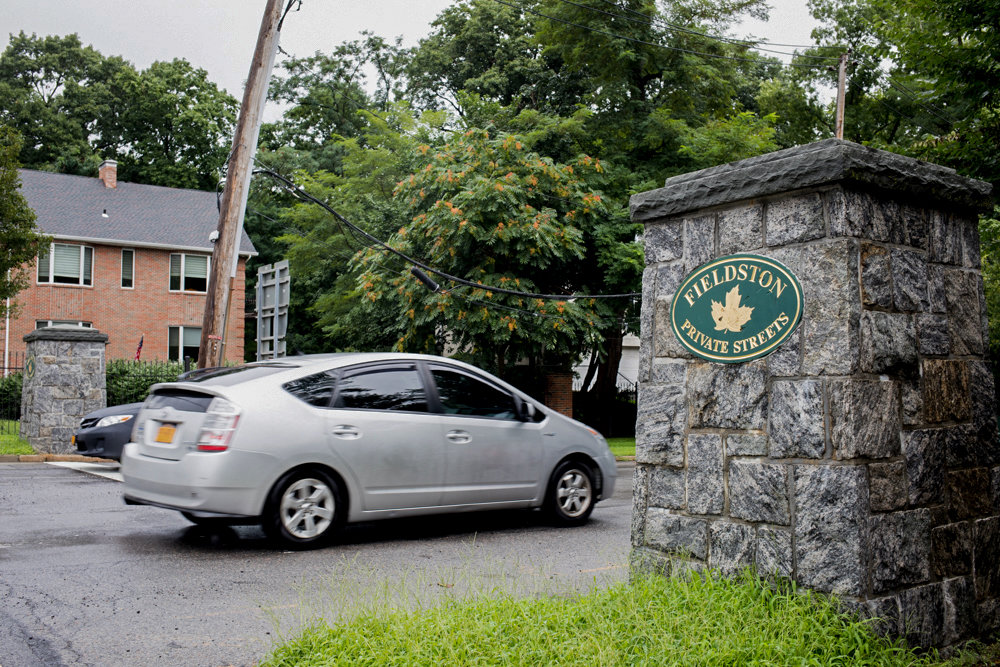 Plans to build a three-story, concrete house with a modern design on College Road has many of its neighbors in Fieldston’s historic district saying ‘no way.’ And they might get the last word on all of it, too, thanks to not only the authority of the Fieldston Property Association, but also the area’s coveted Special Natural Area District.
JULIUS CONSTANTINE MOTAL/ File
By MICHAEL HINMAN

Building a single-family home usually isn’t that difficult to do in New York City. Unlike some of the more dense multi-family structures that have been popping up in places like Broadway in recent years, there is little red tape when it comes to a simple house.

Except when you want to build it in Fieldston. And you’re making little to no effort to build a home that blends in with the rest of its College Road neighborhood.

That’s the uphill climb Michael Lam and Rui Wen He could face in trying to construct a three-story, concrete home on a small lot halfway between Waldo and Tibbett avenues.

But that shouldn’t be much of a struggle at all, says Hal Dorfman, the Manhattan-based architect behind the home’s design.

“The (historic) district is characterized by an eclectic variety of residential styles, including variances of Colonial Revival, Craftsman, and various picturesque revivals,” Dorfman told Community Board 8’s land use committee Monday night.

“There are a number of houses that have various revival styles, and some that are not considered with any style in particular.”

In fact, some houses with a similar design to the one he’s proposing already exist in parts of Fieldston, Dorfman said, including one near the neighborhood’s Waldo entrance that is three stories with a flat roof, and another on Fieldston Road in the center part of the community.

“There were other architects that were actually doing modernist-style and maisonette-style homes in the ‘20s,” Dorfman said. “So I’m now doing a modernist revival style in Fieldston.”

Yehuda Shmidman, president of the Fieldston Property Owners Association, said more than 10 percent of its member households were opposed to what Lam and Rui Wen He want to build at 318 College Road. The board itself is ultimately opposed to the project, Shmidman said, because Dorfman didn’t follow the association’s rules when it came to planning the home.

“Our position is not a secret,” Shmidman said. “Our position is in writing, and we communicated it not only to the community board’s land use committee, but we also copied our correspondence to Mr. Dorfman. Our intention is to be very clear, very transparent, and to ensure that the rules are followed to protect this very special landmark-protected area.”

One of the major problems the home faces is how it’s handling its side yard on the smaller plot, which Seth Goldstein — another Fieldston property owner board member — says violates existing zoning on the property. Dorfman also hasn’t submitted other environmental studies that are typically part of a SNAD application, like stormwater analysis, and how such a home would affect local vegetation and trees.

Land use chair Charles Moerdler says his committee is many things, but it’s not the “design police.” That might not be true of those who would neighbor the proposed house. Including Justin Lerer, who told the committee he believes Michael Lam and Rui Wen He are asking to have too many rules waived so they can build their house.

“The rules exist for a reason,” he said. “I just haven’t heard a single reason proffered by the architect why these several significant exceptions should be granted. As many have said, the (proposed) side yard is ridiculous, and really could be the headline for the poor form of this application.

“It would change the character of the neighborhood. It would reduce the property values of all the neighbors who comply with the rules themselves.

“There just doesn’t seem to be a single reason to grant this, and all the reasons in the world to reject it.”