Neighbors reach out to help, and find help themselves 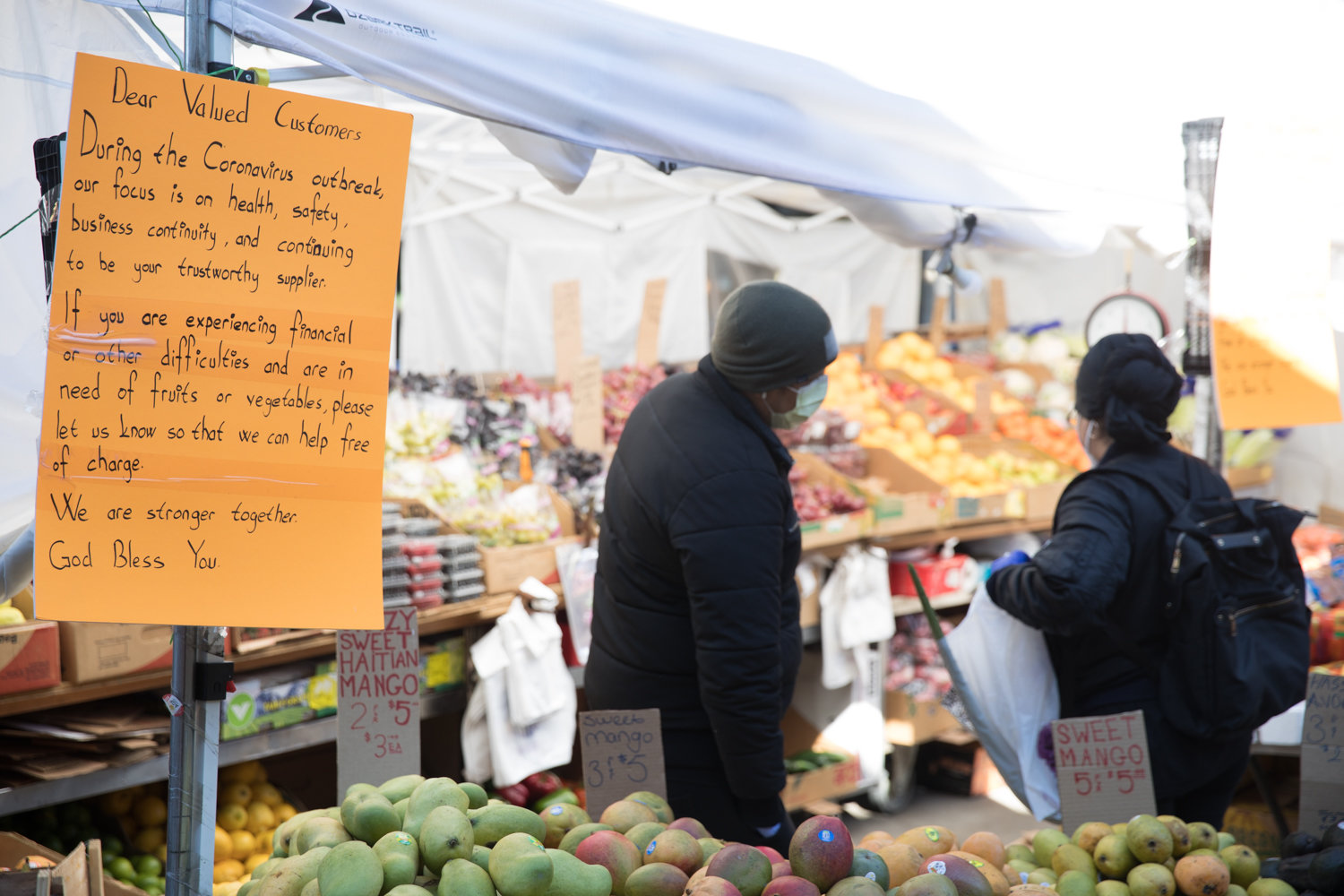 A sign posted on a produce stand on Broadway just south of West 231st Street informs people that help is available for those experiencing money trouble as a result of the coronavirus pandemic.
JULIUS CONSTANTINE MOTAL 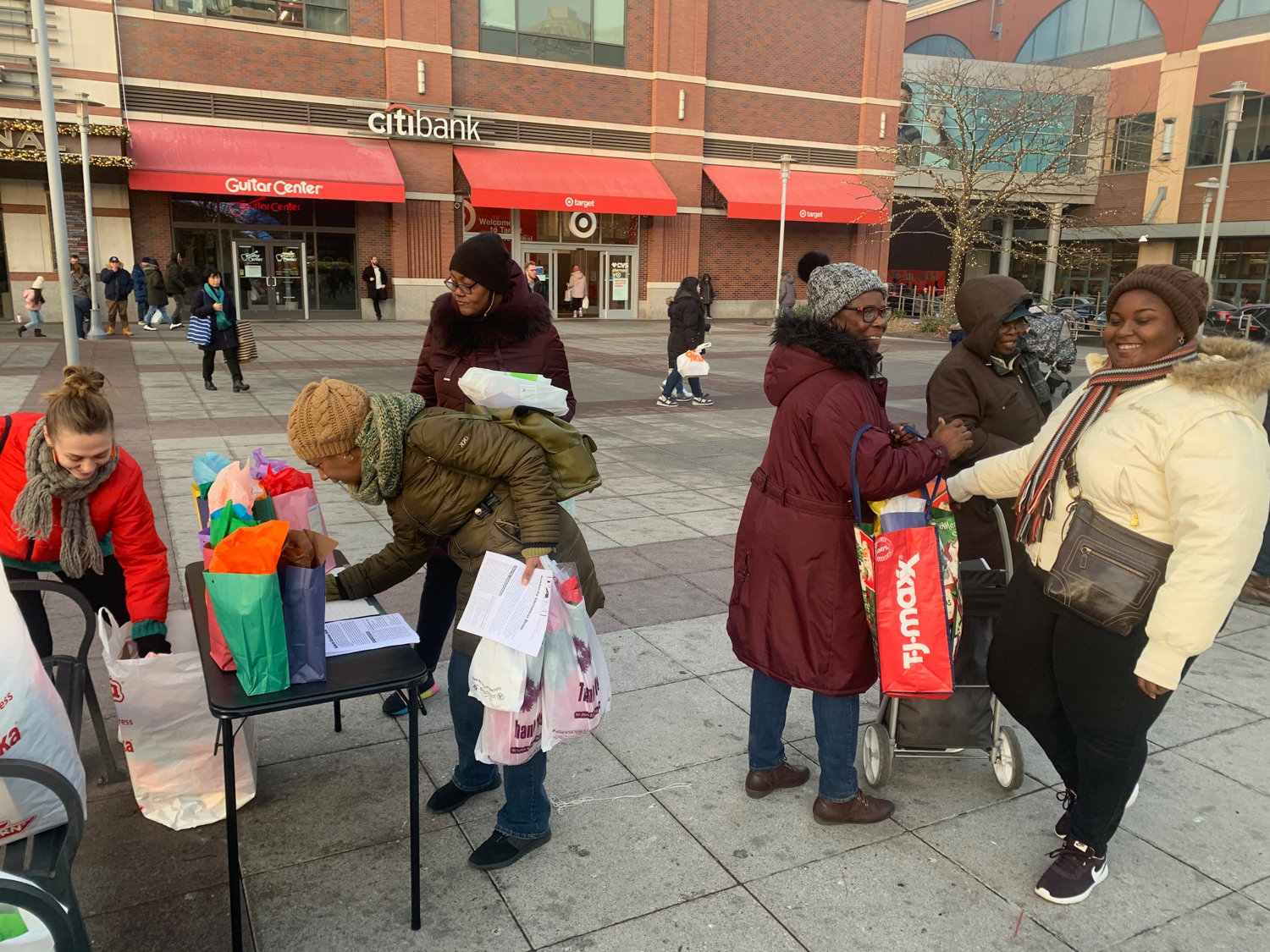 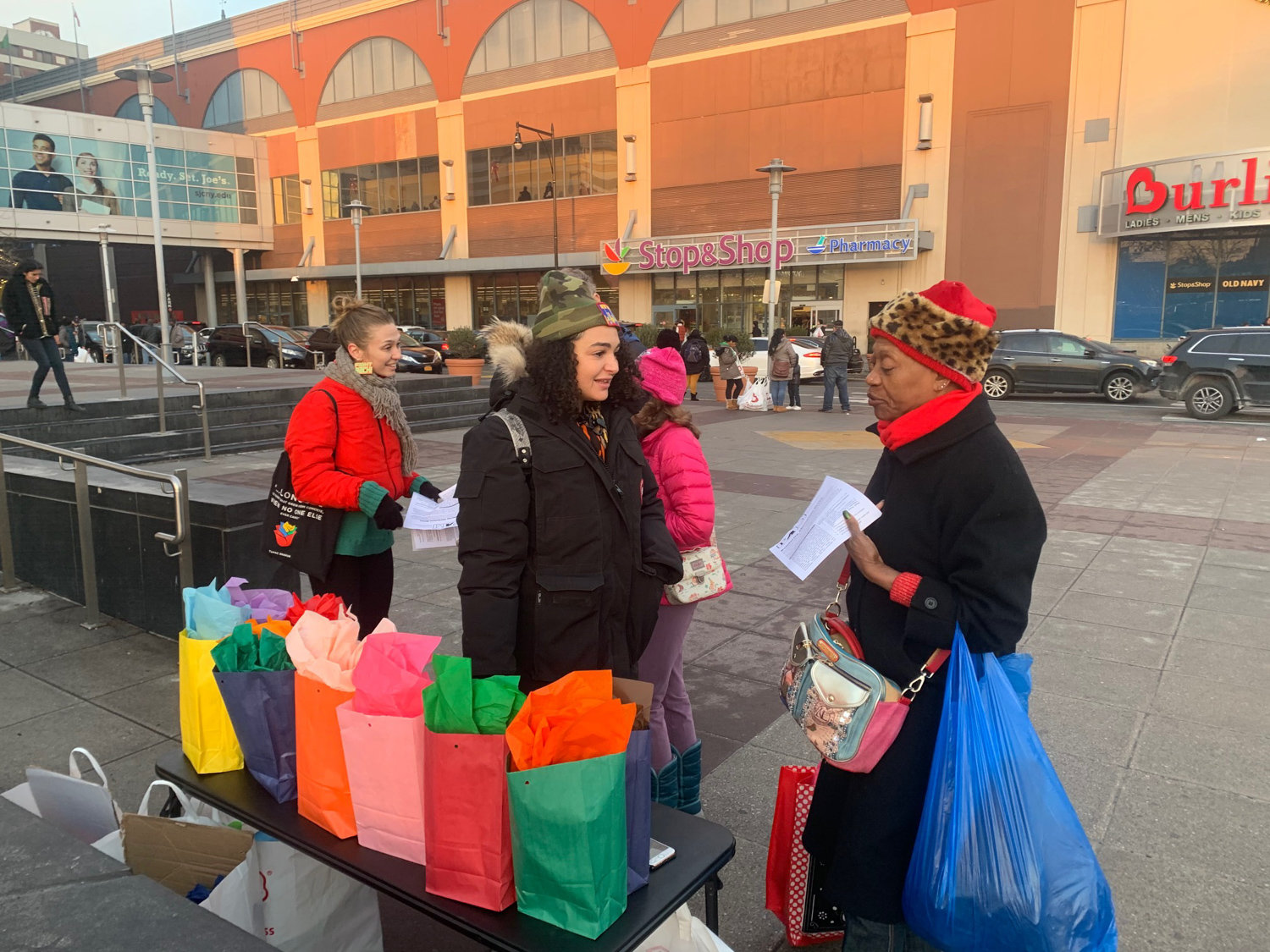 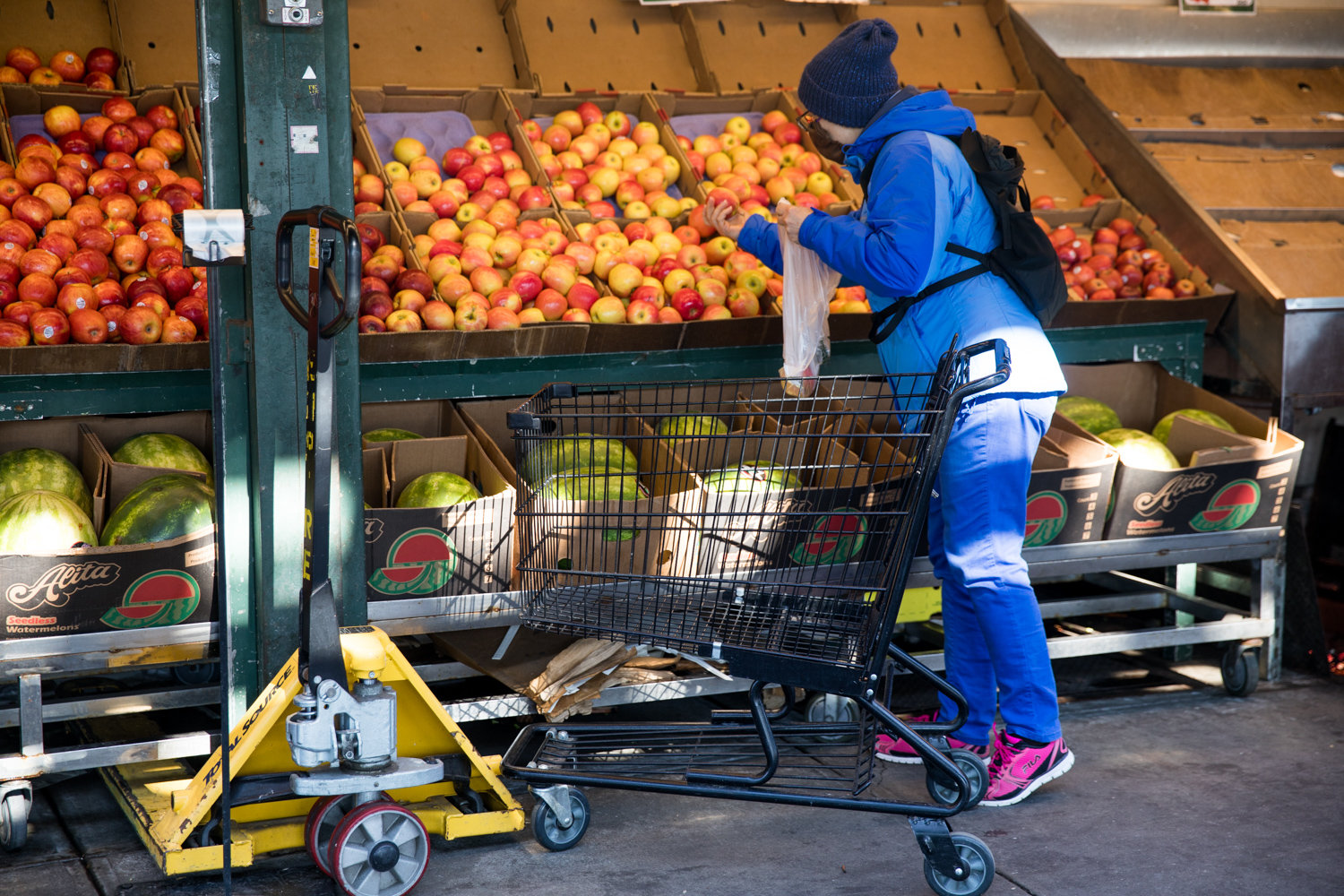 Mutual aid can take the form of running errands and buying groceries for someone who needs them, or having someone do it for you. People all over the city are joining mutual aid networks seeking help or looking to help people, especially now during the coronavirus pandemic.
JULIUS CONSTANTINE MOTAL 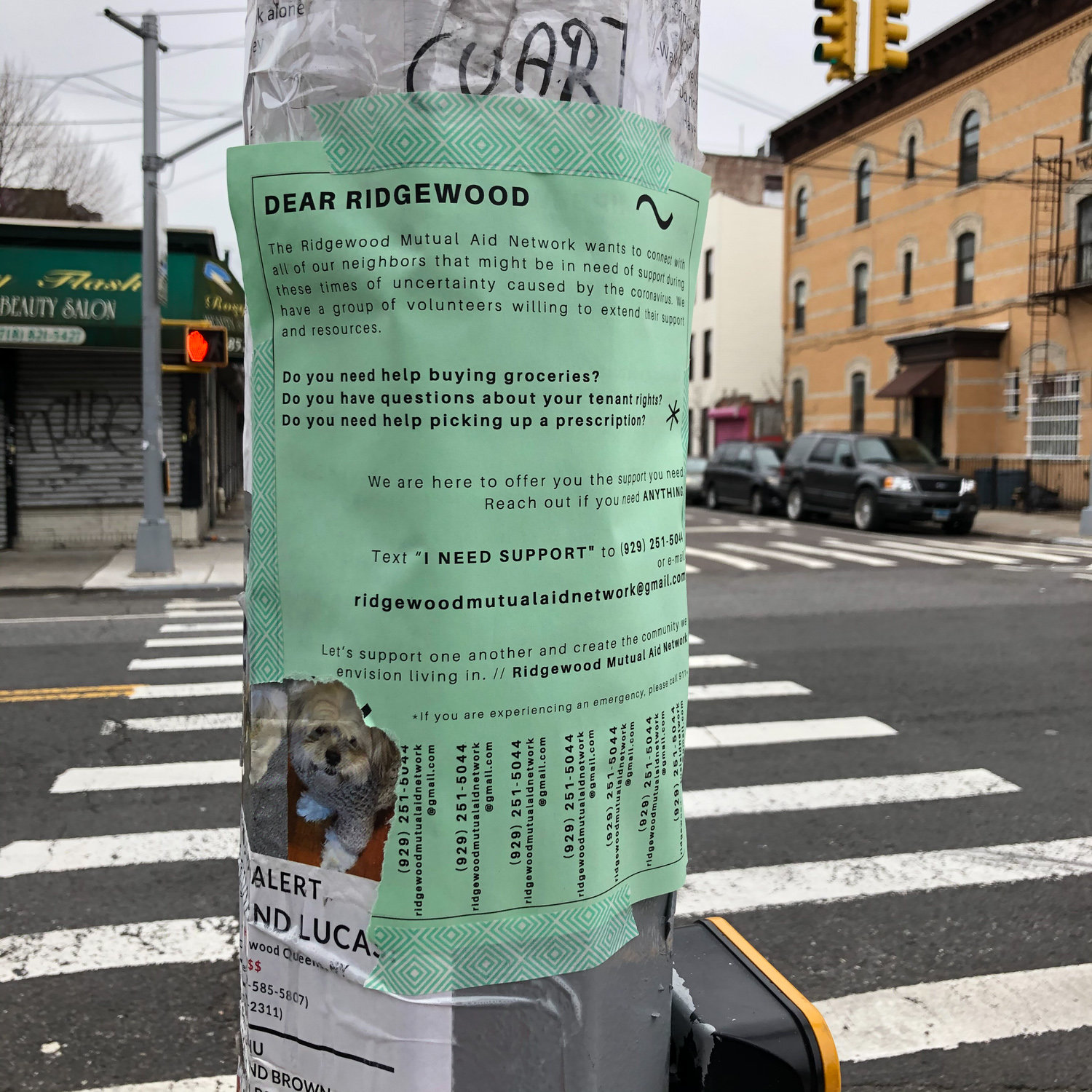 The Ridgewood Mutual Aid Network has a strong presence in its Queens neighborhood, but people as far away as the Bronx have reached out to them for help with finances and other needs during the coronavirus pandemic.
Courtesy of Louise Barry
Previous Next
How you can help?

Many mutual aid networks are accessible through the internet. A few local groups to note include:

People are stuck at home, many not able to leave, disconnected from things we take for granted, like groceries and medication.

It’s the “new normal” as politicians have called it, life during a pandemic. But Rachel Ngu couldn’t sit idly by.

“Once I knew that New York City was going to be hit really hard (by the coronavirus), I was just trying to find local ways of helping,” she said.

And not just with different charities or non-governmental organizations, because she knew far too many people “fall through the cracks in that way.”

Luckily, a little Google searching led Ngu to a rather simplistic spreadsheet on a website organized by the Freedom Arts Movement. The spreadsheet was simple: One tab offers a place for would-be volunteers to share their contact information, what neighborhoods they’re helping, and what they’re willing to do. Another tab allowed people to sign up who were seeking help, allowing FAM to possibly connect volunteers with those who need them the most.

The mutual aid network is quite a departure from FAM’s regular offerings, which focuses on providing a platform to artists regardless of their education, funding or privilege. The group typically works to organize community events, like free classes hosted in Brooklyn, or collecting school and art supplies for kids who need them during holiday donation drives.

When the coronavirus that causes COVID-19 arrived in earnest in New York, it laid off thousands as businesses shuttered. Those that did remain open, for the most part, cut hours or pay, leaving many struggling to make ends meet.

The Centers for Disease Control and Prevention warned people with some chronic conditions — including some as common as asthma — and senior citizens were at an increased risk of succumbing to this disease. That meant that suddenly people were stuck in their apartments, with even a trip to the pharmacy or grocery store out of reach — either because they couldn’t afford it, or simply because it wasn’t safe for them to go out.

That’s where mutual aid comes in. It’s nothing more than a casual organization of neighbors helping neighbors, rather than relying on a nonprofit or other organization to step in. In the face of COVID-19, mutual aid has taken many forms, some of the most popular including making grocery runs for people who can’t make it out.

The FAM spreadsheet is a place for volunteers to post their resources and how they’re willing to help, and also where those in need of assistance to post what will help make them whole.

When she isn’t working her full-time job in the public health sector, Jenna Schmitz is active in her Kingsbridge community, attending rallies and volunteering at a Washington Heights school. In light of the pandemic, Schmitz wanted to help, but felt unsure what she could do. That is until she came across the mutual aid network spreadsheet through social media.

“I felt like reading through some of what other people had put on the spreadsheet made it feel less daunting,” Schmitz said. “I was like, ‘Oh, yeah, I have a car, and I have time.’ I don’t have a chronic illness, and my work schedule is pretty flexible from home. It felt like a great way to plug into the community.”

Schmitz wasn’t alone. Another FAM volunteer, Nancy Schwartz, signed up to deliver food and run errands in her Kingsbridge neighborhood.

“I haven’t actually been called on to do anything yet,” Schwartz said. “I signed up because in this frightening, devastating time, I’d like to focus on being generous and follow the example of all the health care workers in offering help to my neighbors, rather than cowering in a corner.”

Ngu had signed up to run errands around Riverdale on foot, taking on simple errands that might not be so simple for a neighbor.

Schmitz said getting a phone call or text message from an unknown number of a neighbor in need has quickly become routine.

“Someone needed help picking up a prescription, who has a chronic illness and wasn’t able to leave the house because of the risk, their health risk,” Schmitz said. “Someone needed errands, someone needed assistance with groceries.”

While many posts are written by those in need, a few are different. One, for example, comes from Louise Barry, who works with the Ridgewood Mutual Aid Network in Queens. She found the Bronx FAM spreadsheet after a Kingsbridge Heights family reached out to her network.

Ridgewood Mutual Aid was born out of the Ridgewood Tenants Union, organized to support renters facing evictions, displacement, and other difficulties within their apartment buildings. The aid network was built quickly once they realized the scale of the pandemic in the city, Barry said.

“Part of the reason we exist is that we recognize in a crisis like this, often, the government doesn’t step in quickly enough,” Barry said. “Or, if they do, there’s always people who are left out.”

Some of those people could indeed be ineligible for the $1,200 stimulus check Washington is ready to hand out to nearly every adult in the country, or may not have unemployment benefits available to them. Still, they have needs — like food, shelter, and keeping the electricity on.

For the Kingsbridge Heights family that found Barry, their father had abruptly lost his two part-time jobs, and money for the family had run out. The Ridgewood network was able to provide some help, Barry said, but they wanted to find someone local to make sure this family was well taken care of.

Nicolás Vargas, a co-founder of FAM, said that it’s been difficult to spread the word about what help is available, especially in an environment dominated by social distancing. The organization has been active online, however, and has made dozens of calls to families, especially in complexes run by the New York City Housing Authority, letting them know that help is available.

Even for someone outside of an aid network, Vargas says helping often starts out with a phone call.

“If you are in an apartment building, which a lot of New Yorkers are, text a neighbor, someone you know,” Vargas said. “Come up with a plan. Say, ‘We’re trying to keep each other safe in this time of precarity and crisis. We want to know if you have any needs, or if you have any resources.’”

Then, he said, neighbors can keep calling people they know, seeking out others in their extended network in need as well as those who can give. They keep doing that until they’ve built up a good network of those in need and the resources to help them, even if it all exists within the walls of a single apartment building.

For those looking to reach beyond their neighborhoods, Vargas recommends an online spreadsheet put together by the new organization NYC United Against Coronavirus. That document lists resources for all kinds of needs, along with lists of organizations — many of whom are in need of more volunteers.

“My advice is to find organizations that are trusted by the community, and have a history of doing good work in the community, and that plan on sticking around and sustaining themselves after this crisis,” Vargas said. These groups also need to be “working to build community solidarity and self-determination. Not just people who are giving out charity.”