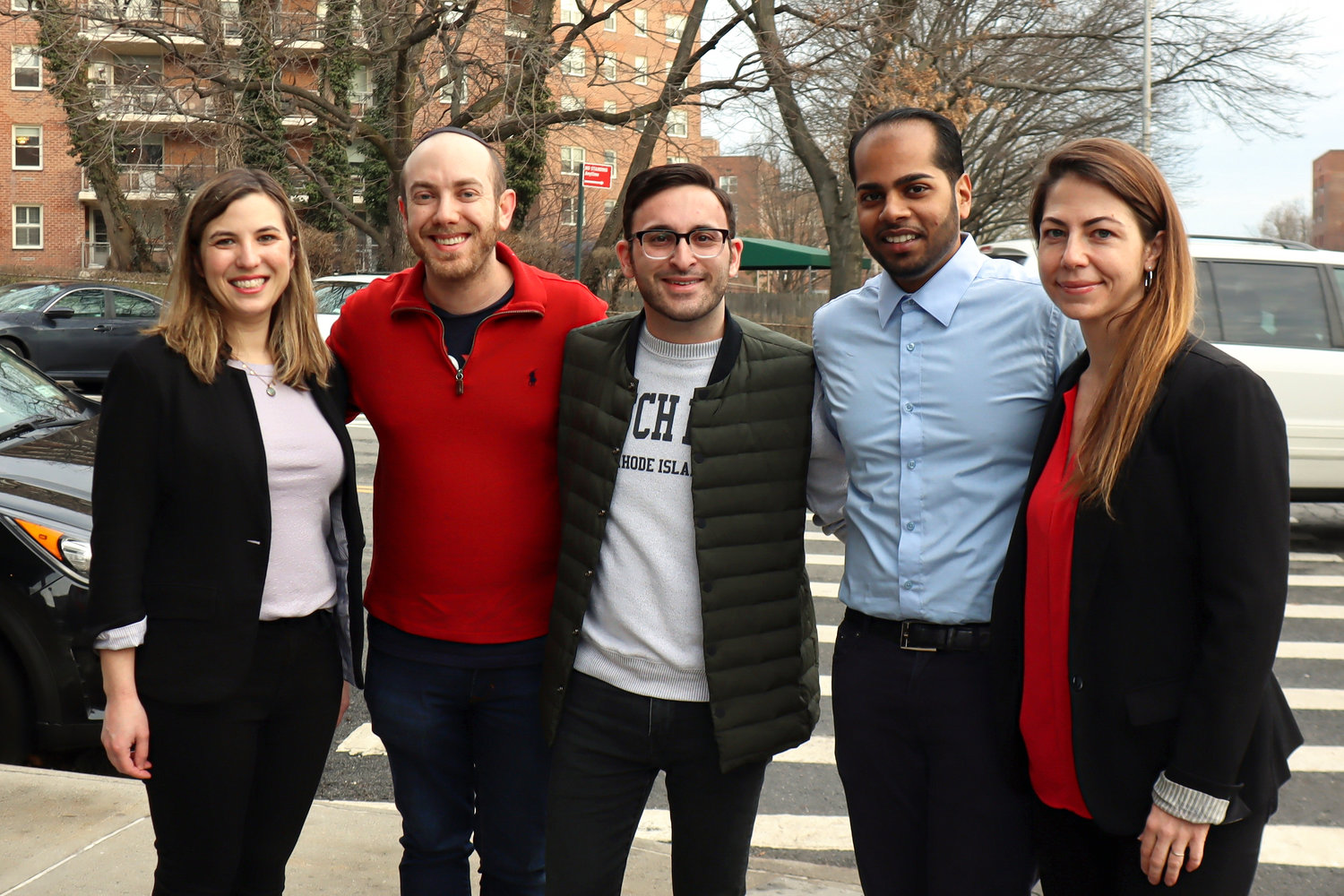 A slate of ‘emerging’ candidates are challenging the Democratic Party establishment in down-ticket races in this part of the Bronx, part of a larger movement that includes Christian Amato, center, who is running for the state senate seat currently held by his former boss, Alessandra Biaggi. This alternative slate includes, from left, Morgan Evers, Aaron Stayman, Ramdat Singh and Abigail Martin.
Courtesy of Abigail Martin
Breaking down the down-ticket races

What do district leaders and state committee members do? And who all’s running?

Breaking the roles down to male and female dates back to the women’s suffrage movement of the 1920s. Eleanor Roosevelt and the League of Women Voters pushed for the female-only role in order to give women an entry point into local politics.

Their official duties include attending party meetings and voting on either county positions or civil judge courtships. They are also expected to lead voting drives and phone-banking.

Since these roles often overlap, like-minded candidates for separate positions often run together on a common platform, creating what’s known as a slate.

There are two slates for the leader and committee positions in the Assembly district represented by Jeffrey Dinowitz.

There are also two “lone” candidates — Carolyn Smith for female district leader, and Zulma Gonzalez, who seeks to keep the committeewoman seat she beat Morik for in 2020.

It’s a jam-packed campaign season. While the state senate and Assembly primaries suck up most of the political oxygen, there are several other low-level races some observers say are worth watching — particularly the Democratic elections for district leader and state committee member.

The races are uncharacteristically competitive this year as three of the four incumbents — most of whom have held these positions for several terms — are not seeking re-election.

Now that the petitioning dust has settled, two main factions have emerged. There’s the old guard, represented by the influential Benjamin Franklin Reform Democratic Club, that’s trying to maintain its waning influence over county politics. Then there’s an emerging slate, composed of candidates with some serious organizing bonafides, aiming to use the power of these positions to combat voter apathy in the district.

For much of the 21st century, the Ben Franklin Club has held a tight grip over the state committee and district leader roles, often culling — and propping up — candidates from within its own ranks.

Yet Dinowitz decided to let go of his district leadership position after being elected to the city council last year. This prompted the Ben Franklin Club to form a new slate, playing political musical chairs in the process.

Weitz is now running for Dinowitz’s old position. Michael Heller, a former club president — and, for a short time, the district manager of Community Board 8 — is looking to take over the state committee position.

Helen Morik, who lost her state committee seat two years ago to Zulma Gonzalez, is now running for female district leader to succeed Martos, the chief of staff to Assemblyman Jeffrey Dinowitz. Johanna Edmondson is running against Gonzalez to claim state committeewoman seat.

Weitz thinks he and his other Ben Franklin incumbents have made great strides in energizing the Democratic Party, both locally and nationally — even though the majority of his constituents might not know it.

“We’ve sponsored a number of forums to activate and educate people in the community,” he said, “whether it be about ballot initiatives or candidates that are not are necessarily local folks, but also citywide positions or statewide positions.”

And voters can expect to see much of the same from this new Ben Franklin slate, Weitz said, as they have seen from those currently in power. “Having new blood, so to speak, certainly can open up and expand what we do.”

With the backing of the Ben Franklin Club, this slate might be expected to cruise to an easy victory, if it were not for an new group of challengers hoping to breathe new life into the district leader and state committee roles.

This emerging coalition includes Abigail Martin and Ramdat Singh for district leaders, and Morgan Evers and Aaron Stayman for state committee. They all have years of grassroots experience, but they want to take their efforts to the next level.

“There’s a very different weight to saying, ‘Hey, I’m just some guy in your neighborhood,’ Stayman said, “versus saying, ‘Hey, I represent you to the Democratic Party. Let’s get you involved. Let’s do the work.’”

This new slate is organized around the idea of increasing voter participation. They want to stress the more-or-less unofficial duties of the job, using the role as an organizing tool to energize the district’s Democratic base.

If elected, they’ll hold voter drives and phone banking sessions. They’ll knock on the doors of inactive or unregistered voters, urging them to get involved. They will push for measures to expand voter accessibility. They’ll put in the work to further educate voters on how politics in the region operate.

“I think there are factions of our districts of voters who feel disenfranchised, and feel left out of the conversation,” Martin said. “I think (there’s) a sense that the system is rigged — that their vote, an individual vote, doesn’t necessarily matter. That’s a big issue.”

Last year’s primary that ultimately kept Eric Dinowitz in the council seat he won during a special election just weeks before, had a turnout of just 27 percent among active registered Democrats voted in that race — a contest that included Martin as one of the candidates trying to win the seat.

Stayman, for his part, brought up voter turnout in the special election ahead of the primary put together after Andrew Cohen left office.

If elected, Singh said he wouldn’t be the type of district leader that operates behind closed doors.

Instead he wants to make decisions on party policies with input from his constituency. And Singh, a teacher by trade, can’t help but bring his pedagogical skills into his politics.

No such thing as a
stranger in politics

These two respective slates are no strangers to one another. Stayman and Evers fell out with the Ben Franklin Club in early 2020 ahead of the coronavirus pandemic leading Evers and Stayman to run a slate against the leadership team led by Michael Heller in early 2020.

“The Ben Franklin Club, it has a very exclusive nature,” said Stayman, who was elected a club vice president that year. “And I think that — without directly saying that I’m against the club, per se — I just think that my brand of politics is one of ‘just open the door and bring them in,’” adding that his critique is aimed more at decisions made by the club’s leadership rather than the members at large, many of whom he still values.

Evers agrees. It’s why she ran against Heller in the first place.

“I think that a lot of the visions that I saw for the Benjamin Franklin Club — as far as being an inclusive place, a welcoming place, a transparent place — I think that I can move that on to the New York state Democratic committee.”

Given the history between these two groups, the decision for this emerging campaign to run against the Ben Franklin slate could be seen as a referendum on the club itself. Yet both sides will insist it’s not.

Regardless of the history between these slates though, Weitz said he’s looking forward to the next couple months of spirited campaigning from both sides.