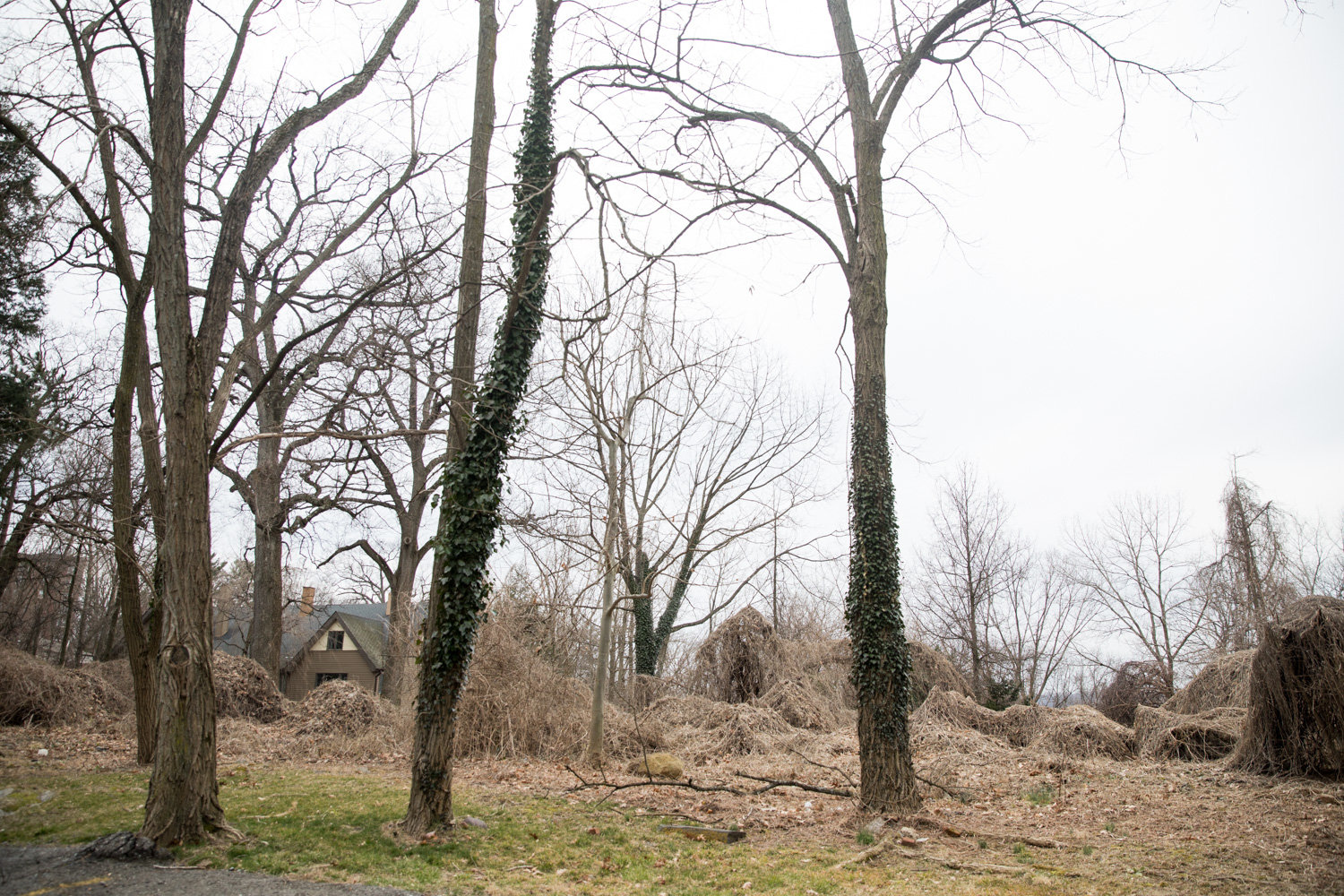 An overgrown patch of land sits along Delafield Way just off West 246th Street and Douglas Avenue — part of a little more than 10 acres of land that has been in development hell for the better part of 40 years.
JULIUS CONSTANTINE MOTAL 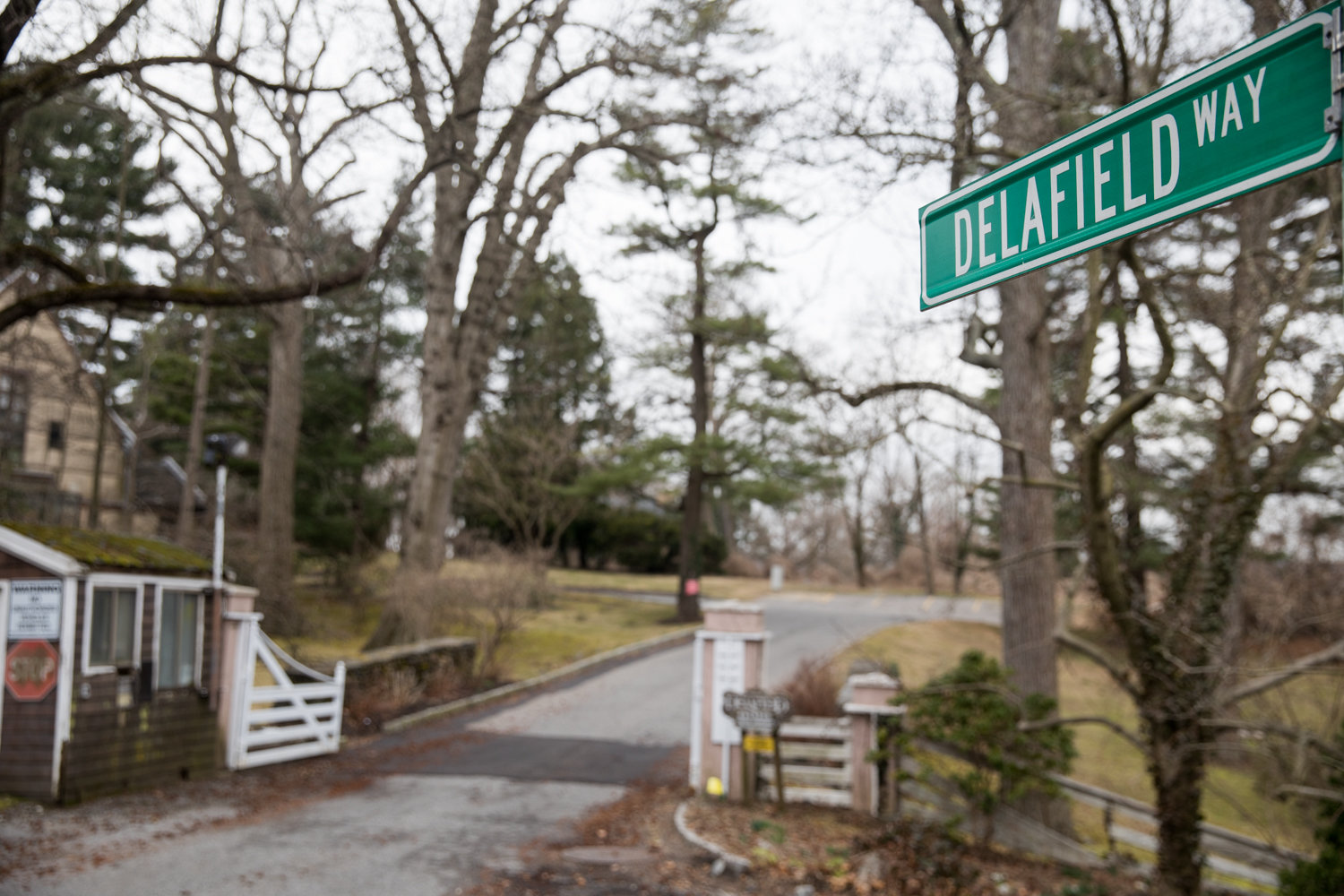 A vacant plot of land along Delafield Way has been the site of a number of false development starts over the years. But that could change if latest plans to build 19 more houses — to join the existing 15 — makes it through the city’s red tape, beginning with Community Board 8.
JULIUS CONSTANTINE MOTAL
Previous Next
Leave that street alone

While many were focused on the impact a built-out Delafield Estates would have on the estate area’s private sewage line and its massive amount of foliage, David Greenfield had a much different concern: How would Riverdale Temple be affected?

The synagogue is situated right in front of the proposed development, where Independence Avenue and West 246th Street converge. It was West 246th that had him the most concerned, especially since the original Delafield Estates plan from the 1980s called for widening the street by 10 feet.

Michael Goldblum, the architect working on finishing the 34-home Delafield Estates community, said that while the street widening was part of the 1981 plan, the city planning department’s Juton Horstman has no intention of enforcing it.

“We don’t know why it was done, and certainly the developer doesn’t want to do it if he can avoid it,” Goldblum said of Abraham Talassazan, who bought the property in 2012.

“I spoke to Juton, and he would be open to talk about getting rid of that requirement.”

The plan was too ambitious. That’s exactly what Charles Moerdler thought as he sat as a member of Community Board 8’s land use committee back in Summer 1980.

Millbuck Homes wanted to build 33 low-rise condominium units on the site of one the area’s last grand manors between West 246th Street and Douglas Avenue on what would become Delafield Estates.

Named for Maj. Joseph Delafield, one of Riverdale’s founding fathers back when the land was still part of Westchester County, these last 10 acres remained in the family until 1965 when Edward Delafield donated the property to Columbia University, with some hopes that the Ivy League school’s president might reside in the Delafield mansion that still stood guard at the heart of the land.

It never happened. Instead, the property’s only resident in the 1960s was a chimpanzee being taught how to communicate by Columbia grad students.

Columbia eventually sold the land, with Millbuck hoping to sell condos at price points beginning at $1.25 million in today’s currency.

Neighbors living in the homes around Delafield Estates were not happy. Bronx borough president Stanley Simon was worried developers might try to build high-rises. And Moerdler didn’t think anything would be built at all.

To ensure that, at the very least, the land would be restored to its original, natural beauty, Moerdler proposed Millbuck put up a $1 million bond — equal to more than $3 million today.

A number of bankrupted owners, a fire-destroyed mansion and 40 years later, Moerdler is still dealing with Delafield Estates. But now, with the financial backing of real estate developer Abraham Talassazan, the property is closer than ever before to finishing what are now expected to be high-end single-family homes.

There are 15 already built, and Talassazan wants to build 19 more. But even four decades haven’t softened the rest of the neighborhood that surrounds his development, erecting obstacles for everything from tapping into the community’s private century-old sewer system, to pointing a few driveways toward neighboring streets like Douglas Avenue.

“For 70 years, we’ve managed and maintained some 20,000 linear feet of lines to hundreds of properties and four major apartment buildings,” said Susan Morgenthau, president of Riverdale Sanitation Corp., which manages the sewer lines. “We’re the sole provider of those services, and it’s very important to us that when there is any type of residential development or any type of real estate development, that we protect those lines.”

Most of the sanitation group’s issues have to do with how driveways could cross the terra cotta piping, and many of its culverts.

“We all know that this project has taken a very long time, and we apologize for how long it’s taken,” Goldblum said. “But there are a lot of moving parts.”

Many of those moving parts will have to come together soon since Delafield Estates is now on the clock in terms of the planning process. While much of the project could be built as-of-right, according to Goldblum, the fact the development laid dormant for so many years required it to go through the city planning process once again.

As part of that process, Goldblum and others on his development team have met not only with Morgenthau, but many of the groups representing neighbors, including one led by architect Sherida Paulsen. As controversial as some of the earlier plans have been over the decades, she described one major positive — limiting water runoff to inside the neighborhood, and not flooding neighboring streets like West 246th and Douglas.

“These new houses, these new designs, some of them are on the steep slopes on the property,” Paulsen said. “It forces us to ask the question of how does this qualify as a minor modification when it dramatically changes what it impacts?”

While the city planning department views the changes as minor, even Goldblum admits that there have been some significant changes to the plans, even in the last few weeks as a result of these various conversations with neighbors. While the number of houses proposed remains the same — 19 — the amount of total floor area has been reduced dramatically from 132,000 square feet to just under 112,000. Total lot coverage also will drop, providing for larger natural lots inside the community’s Special Natural Area District.

“The impervious ground cover counts not only the footprint of the houses, but the footprint of all the paving,” Goldblum said. “It allows as much water to be absorbed by the soil as possible.”

Goldbum also plans to save as many of the nearly 550 trees on site as possible. While some of the original plans would have removed a fifth of them, once the houses are built, only nine trees would be ultimately lost.

The Delafield Estates discussion took up more than two hours of the land use committee’s meeting Monday night at The Riverdale Y, but it’s still not quite enough for Moerdler. He’s asked Goldblum and his team to return once again for a special meeting the committee is planning before the end of the month. CB8 has until the end of April to provide its recommendation to city planning.

“I think you have a lot of work to do before then,” Moerdler said. “Get back to us as quickly as you can.”