New kind of Monument vigil that’s product of its time 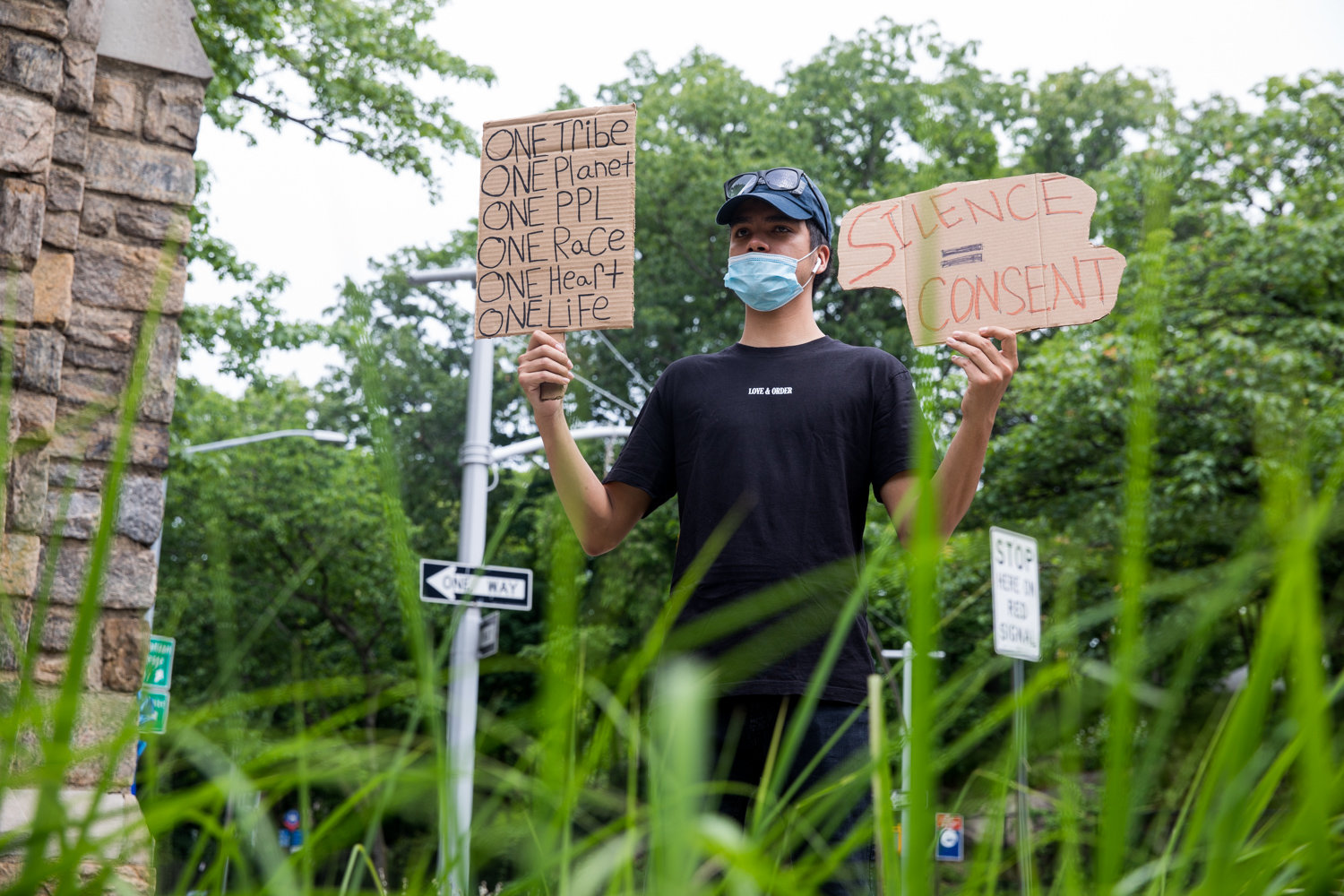 James Cortez holds signs advocating for equality and action in the face of police brutality during an ongoing vigil at the Riverdale Monument that was organized following the police-involved death of George Floyd in Minneapolis.
JULIUS CONSTANTINE MOTAL 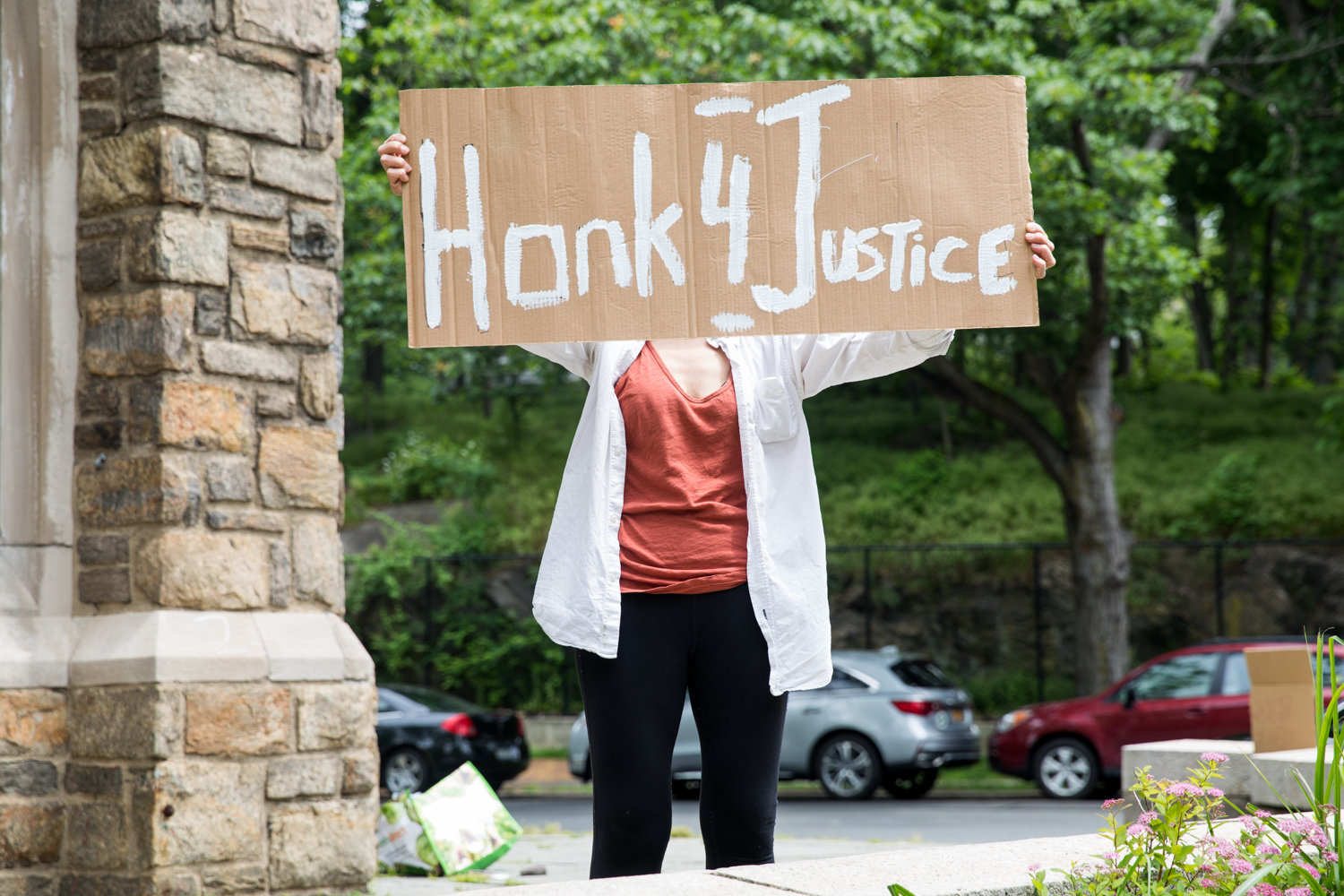 A community member holds up a sign that reads ‘honk 4 justice’ at the Riverdale Monument. He was part of an ongoing vigil organized following the police-involved death of George Floyd in Minneapolis.
JULIUS CONSTANTINE MOTAL 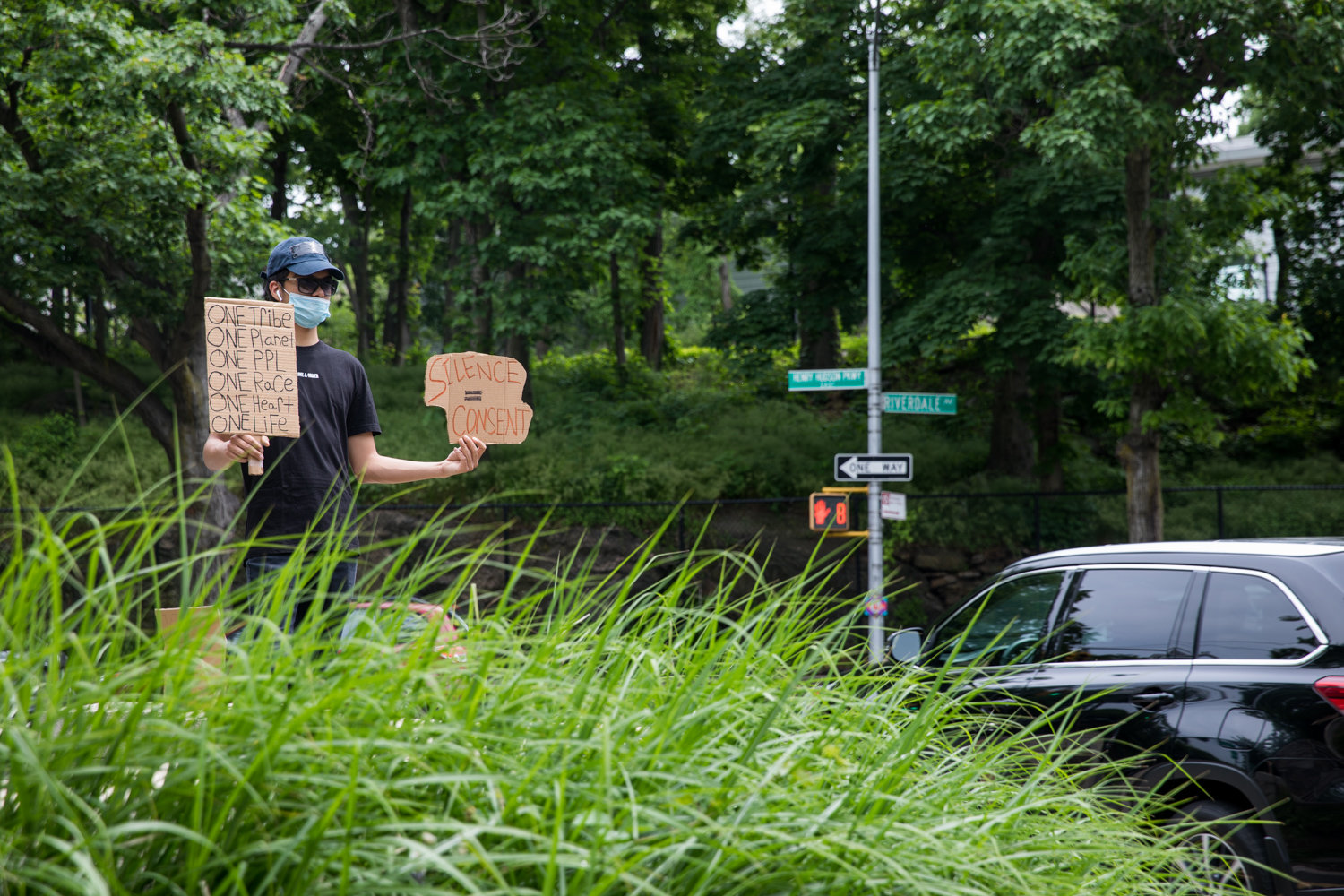 A car passes by the Riverdale Monument as James Cortez holds up signs in support of the Black Lives Matter movement. It was part of an ongoing vigil, organized following the police-involved death of George Floyd in Minneapolis, allowing people 20-minute shifts in the community center, to accommodate for coronavirus social distancing.
JULIUS CONSTANTINE MOTAL
Previous Next
By ANTHONY CAPOTE

Shavuot is a time when many practicing Jews pause to commemorate Moses receiving the five books of the Torah. It’s a two-day observance outside of Israel, which this year fell right at the end of May. And for Ezra Seligsohn, probably at the very worst time for someone who likes to pay attention to the news.

The Hebrew Institute of Riverdale associate rabbi promptly turned off his phone and all other electronics on May 28, and didn’t turn them on again for 48 hours. When he did, Seligsohn discovered the world revolted while he was gone as thousands of people took to the streets protesting police violence.

It seemed the entire world was suddenly up in arms after nearly three months of being cooped up at home because of to the coronavirus pandemic. The protests in nearly every major American city began after video surfaced online of a police officer in Minneapolis appearing to kneel on the neck of George Floyd — a 46-year-old black man and father of two — for nearly nine minutes as three other officers stood idly by. Floyd died soon after.

The video sparked outrage in communities of color across the nation, inflamed even further when demonstrations in Minneapolis turned violent.

Seligsohn wanted to contribute to these protests, but he also was mindful of social distancing guidelines. As the interactions between protesters and police grew increasingly tense over the following days — especially in New York — the rabbi felt a pull toward making his voice, and that of his community, heard.

But he also wanted to ensure people could do so with minimal risk of infection.

“My wife and I stayed up talking for a long time about how we wanted to participate, and what kind of action we wanted to take,” Seligsohn said. “Whereas typically the synagogue would call a rally, we felt like that wouldn’t be an appropriate decision at this point.”

They decided instead to work with the Riverdale Jewish Community Partnership — comprised of almost every synagogue in the northwest Bronx — to organize an ongoing vigil at the Riverdale Monument on West 239th Street and Riverdale Avenue. Members of Riverdale’s interfaith community often use the monument, built to honor World War I veterans from the area, as a staging ground for rallies and demonstrations on social issues around the world.

‘We will fight back’

Instead of letting people gather en masse, though, they signed up for 20-minute time slots, allowing up to 10 individuals or families to gather in any given slot. This approach, Seligsohn argued, allows people to participate in demonstrations while maintaining a social distance, which allowed voices to be heard from morning until curfew.

People signed up for their time slots through an online document that attracted hundreds of signees. People were scheduled through the end of the day Tuesday.

“I think we are fighting against systemic racism in this country, certainly against police brutality and other injustices,” Seligsohn said. “These are issues that have plagued our nation for hundreds of years, and they are going to require a tremendous amount of work and reconfiguring in order to make this work.”

Not all protests in New York have gone as smoothly as those in the northwest Bronx. Just a few miles east, police reportedly surrounded a June 4 peaceful march with a tactic known as “kettling” in Mott Haven, arresting people en masse.

The violence indirectly associated with the protests grew so troublesome, in fact, that Mayor Bill de Blasio followed other major cities in instituting an 8 p.m. curfew across all five boroughs.

The curfew — which he ended a day early over the weekend — had been a serious point of contention as many demonstrators decried what they called peace-filled days but violent nights.

But many, including local activist Jennifer Scarlott, say they have been pleased to see so many peaceful demonstrations, especially in this part of the borough. Scarlott took a slot at the ongoing Monument vigil and even participated in a June 3 impromptu rally at Seton Park.

“It was actually really heartening because there was an awful lot of very affirmative, very enthusiastic responses,” Scarlott said.

On the day she first attended the vigil, Scarlott said it seemed very small, even though the folks who had the shift before hers stayed well into hers, and she did the same with the group assigned after her. Since then, however, she says the vigil has grown in popularity and size.

“I’ve been hearing that a lot of folks have been going, and that they were sort of sorry they hadn’t heard about it,” Scarlott said. “They really wanted to participate, and that they just went ahead and went. In fact, I heard that there were 30 people there a couple afternoons ago.”

Speaking out, from all ages

Scarlott added her joy at seeing young people in particular take action in the neighborhood, specifically a pair of locally grown siblings who organized a march from St. Gabriel’s Rectory on Arlington Avenue to Van Cortlandt Park on last Saturday.

Lily and Philip Feldman grew up in Riverdale and are still active in the community. When protests broke out in New York, Lily said they decided they would no longer let their neighbors sit silently in the face of injustice.

“I think growing up we realized that the community as a whole kind of live behind rose-colored glasses, where we don’t really see what’s happening surrounding us, we just focus on our community and how things play out there,” she said. “We think that Riverdale has a very hush-hush mentality, and that’s part of the problem because we then don’t stand up against what’s happening to our neighbors, even just down the hill in Kingsbridge and Washington Heights, and Inwood and Harlem.”

From St. Gabriel’s, the crowd of 500 protesters stopped near Johnson Avenue to take a knee in silence for eiught minutes — roughly the amount of time former Minneapolis officer Derek Chauvin had his knee on Floyd’s neck in the now-viral video — in the middle of the street.

Then, they walked up Riverdale Avenue to St. Margaret of Cortona, through Fieldston, and finally joined another group of nearly 1,500 demonstrators in Van Cortlandt Park.

“Part of the reason why I feel like we need to be loud in those streets is because the firsthand witnessed racism and the normalization of it,” Lily Feldman said. “We really feel like they need to hear and see a demonstration. Of course, there are people amongst that community who support what we support, but we also know that still, within that community, there’s a lot of people who are living in a very outdated mindset.”